As I said in my previous post on Monday last the weather forecast for tuesday was good then the following morning they changed their minds and it was to be not good. On that Tuesday the weather for Wednesday was to be mostly cloudy then this morning, Wednesday, they changed their minds again and it was going to be good. Today looks like a last minute emergency trip day.

Last weekend Amanda pulled a muscle in her back which was fairly painful and it had started to improve and she didn't want to do a lot of walking as it might aggravate the problem so it was me on my own this time.

I got off the Tube (Central Line) at Tottenham Court Road as I was headed for the Covent Garden area. A hundred yards along New Oxford Street and round the corner into St. Giles High Street and there was St. Giles-in-the-Fields. 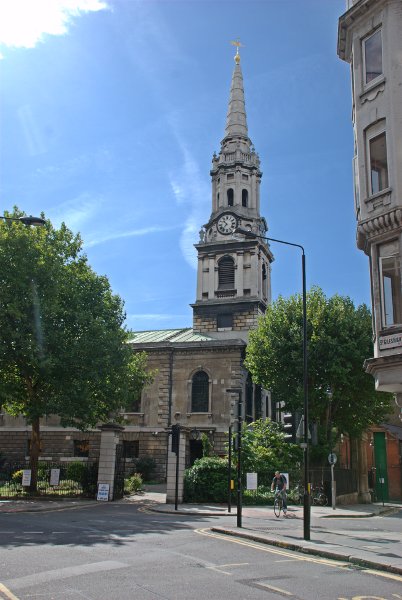 Along the footpath past St. Giles church, along St. Giles Passage and then Mercer Street I found myself at Seven Dials. Seven Dials is a small circular area where seven roads meet and in the centre is a pillar bearing six sundials. The original plan, in the 1600s, was to have six roads converging but that was later altered to seven. The design of the pillar, however, was not altered which is why it has only six dials (someone has blundered). After this area was built it gradually deteriorated until by the 1800s it was one of the most notorious slums in London. However it is now a prosperous and attractive area including lots of interesting shops and, despite some redevelopment, many of the original buildings remain.

This shows three of the seven converging roads. 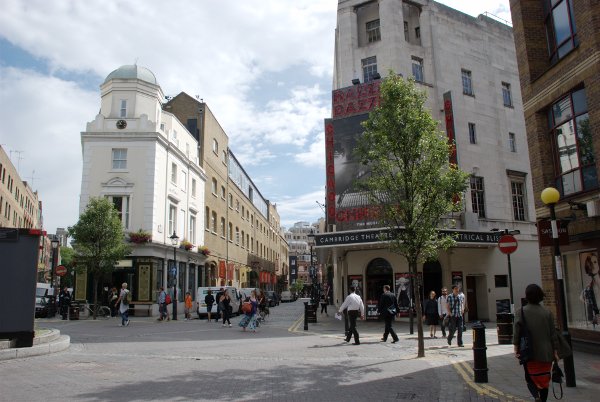 And, of course, we must not forget the six sundials. 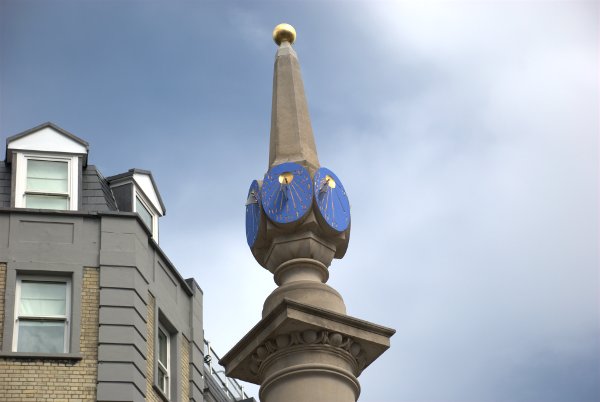 The Covent Garden area is full of narrow cobbled streets and even narrower alleyways. It would be very easy to take a couple of steps and miss something really quite interesting. Look at this picture for example: 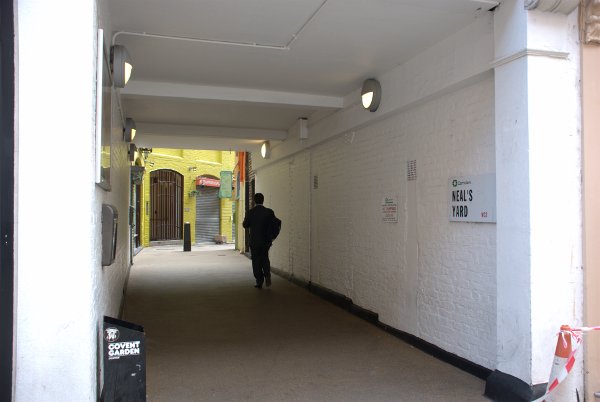 This covered alley off Monmouth Street, one of the seven roads that converge on Seven Dials, could be easily passed with a quick glance as something not worth investigating but that would be a mistake because what you'd be missing is this: 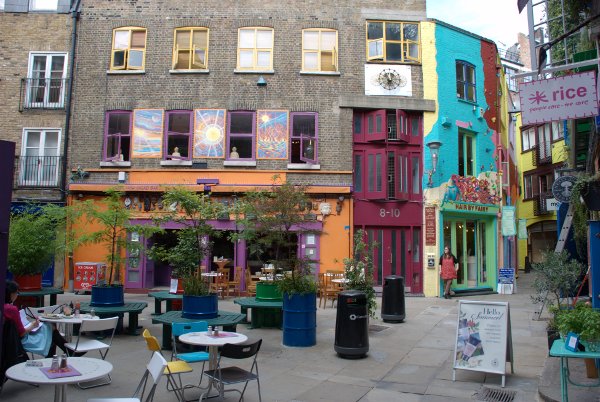 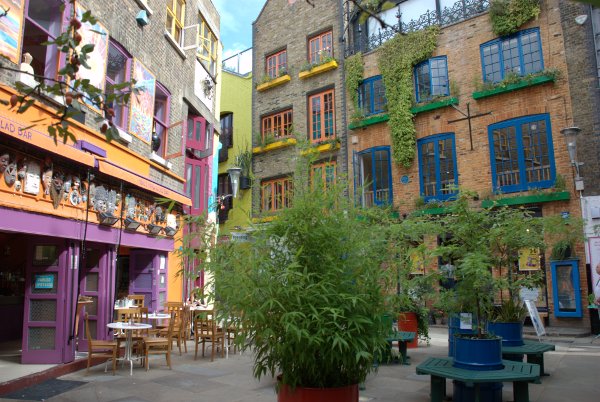 Do you need a little colour in your life? Then a visit to Neals Yard is for you. Not very large but certainly very colourful and is named after the 17th century developer Thomas Neale.

Coming out of Neals Yard into Shorts Gardens and looking across the road to the left is another opening in the wall. 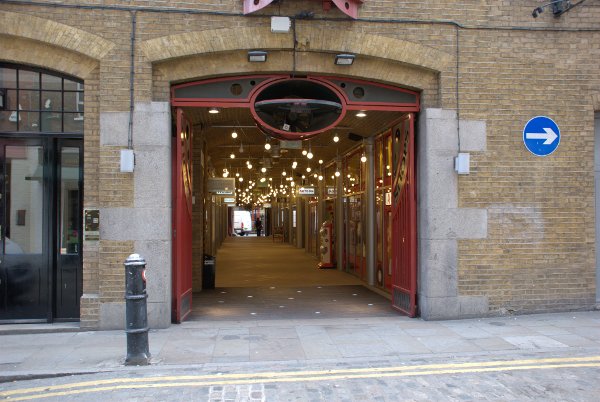 Taking a closer look we see: 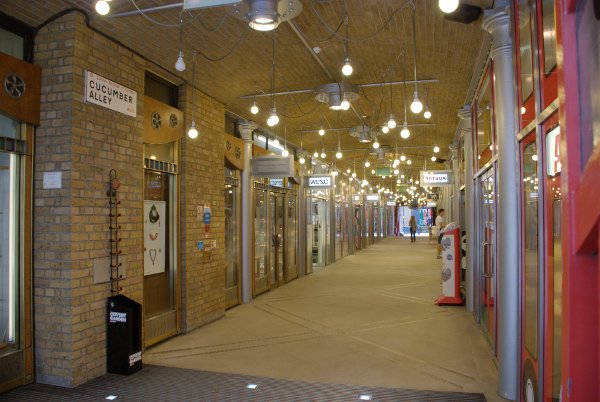 This is Cucumber Alley. What I suspect has happened here is that the original buildings have been demolished to make way for a new building but Cucumber Alley already existed as a public right of way so had to be retained. The builders have incorporated it as a shopping arcade that runs through from Shorts Gardens to Shelton Street.

I don't know why it is called Cucumber Alley although being in the Covent Garden area  there may be a conection there.

I was wandering towards my next planned destination when I popped out into Long Acre and saw this building in the distance – well you couldn't really miss it could you? 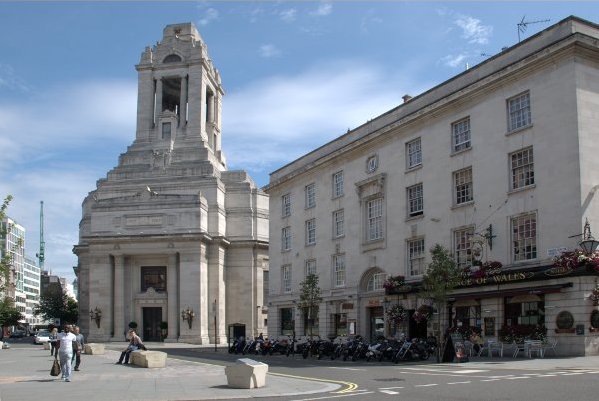 It turned out to be Freemasons Hall. On the front of the building there is a legend which reads 1717-1967 but that early date isn't when the hall was built but rather the date when the Freemason's Society was started. This hall is the third on this site and is in the Art Deco style having been built in 1927. An impressive and distinctive building.

I went back to my original route and from Long Acre I went through yet another narrow alley: 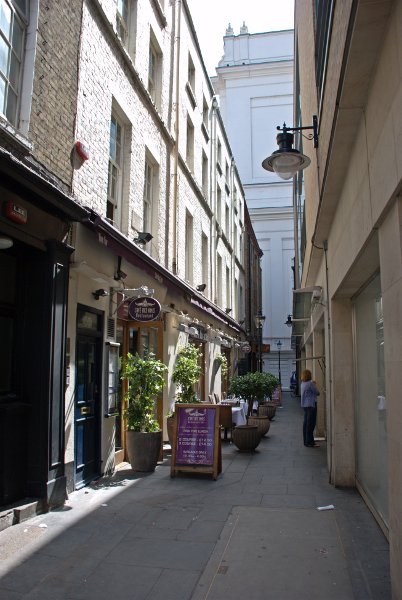 and popped out into Floral Street. 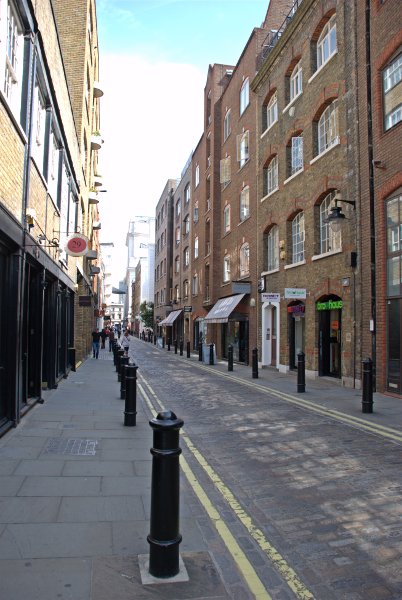 Floral Street is, as you can no doubt see, a narrow cobbled street (is there any other sort around here?) which runs parallel to Long Acre. There are a number of narrow streets and alleyways off Floral Street one of which is Rose Street and includes the Lamb and Flag Inn where the street turns sharp left. 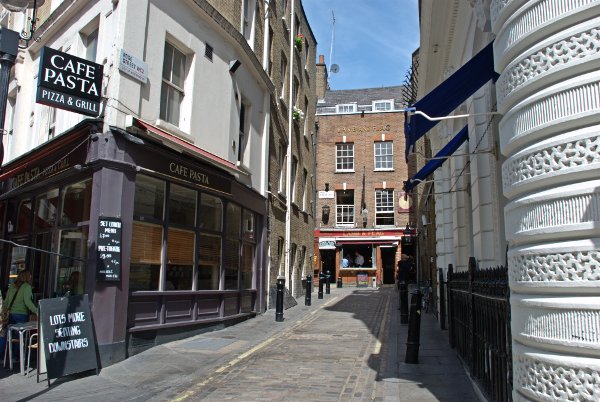 First licensed in 1623, it's the oldest pub in Covent Garden and possibly one of the oldest in London. You may think that Rose Street is narrow but where it turns sharp left in front of the pub an alleyway continues straight on back into Floral Street. 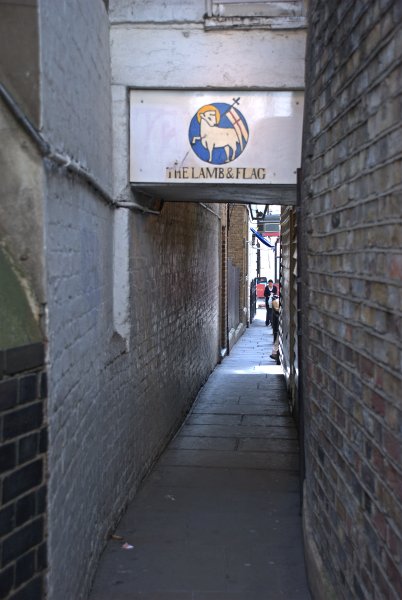 It is wide enough for two people to pass but only if they turn partly sideways.

From the southern end of Rose Street I went along Garrick Street, right into New Row and left into Bedfordbury where I was looking for the entrance to Goodwins Court: 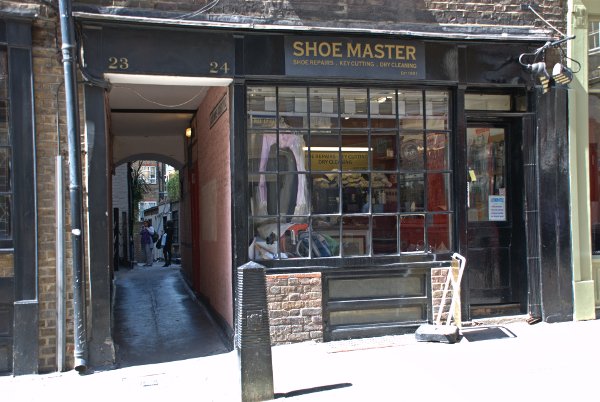 This is what you would have missed: 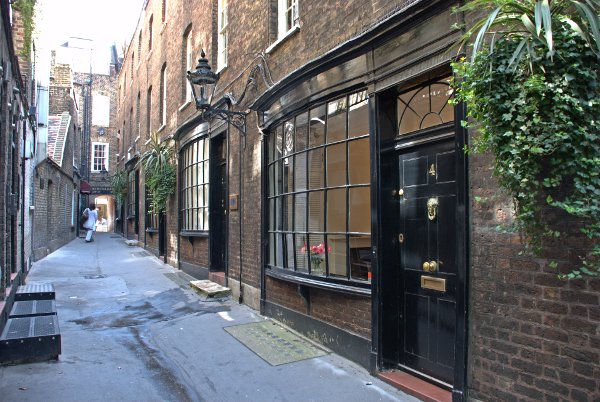 These buildings date from the 1600s and must have survived the Great Fire of London and you were going to walk past.

Out of the far end of Goodwins Court into St. Martin's Lane then right into Cecil Court. 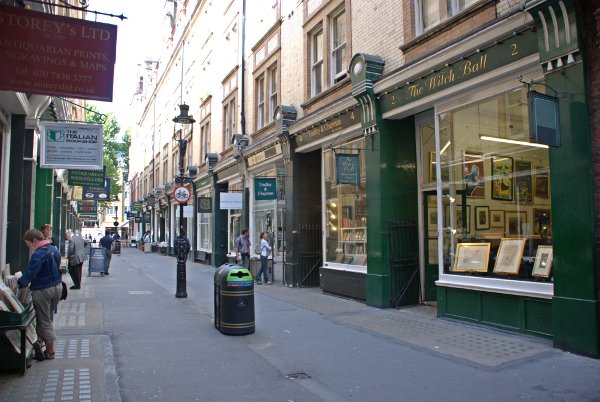 This is supposedly the street that gave someone the idea for Diagon Alley in the Harry Potter films. It is full of interesting little shops some of which I noticed were book shops. Now onward to the entrance to Inigo Place and thence to my final destination, the old Covent Garden Market. 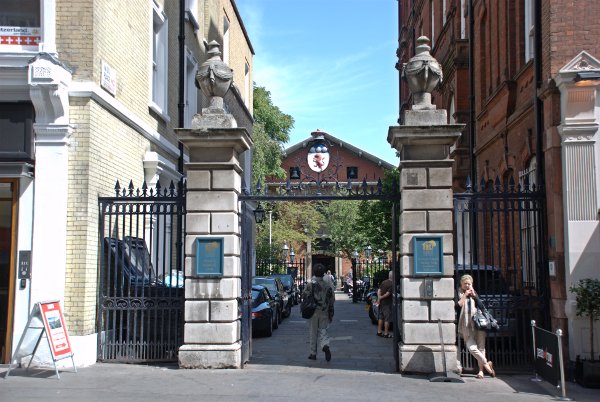 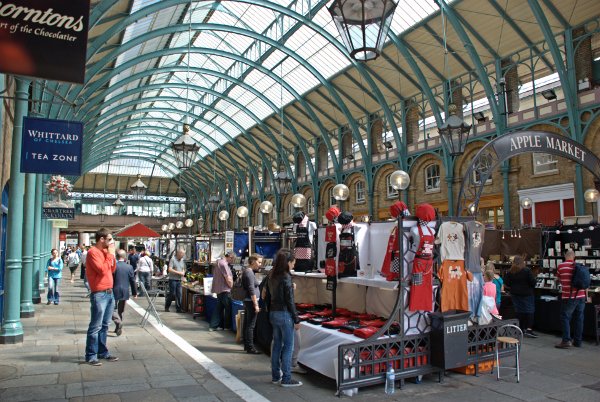 This is full of stalls, little shops and you'll be tripping over places to eat but the old market buildings are just a small part of what there is to see in the Covent Garden area and I can't help wondering how many visitors come here and think that have 'done' Covent Garden.

Wandering through the maze of narrow streets and alleyways was an enjoyable experience and I hope you enjoyed it as much as I did.