When we visited Wells Cathedral this past summer we eventually found ourselves in the Quire. At one end of the Quire stalls was a small pulpit with a flat wooden stand on the front edge which was obviously meant to support an open book. On this board was a cushion and on the cushion was – well see for yourselves. 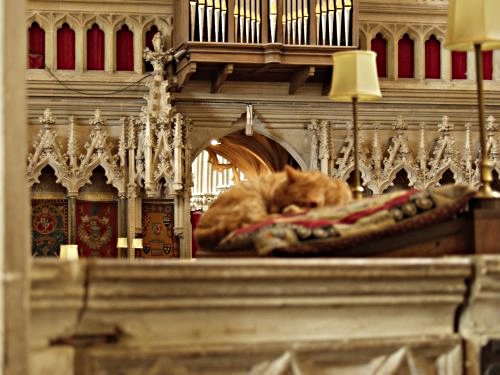 This is Louis. He lives in the cathedral apparently in considerable comfort. Must be noisy when the choir’s singing and a chap is trying to get some sleep but then some people have no consideration.

The weather on Thursday was supposed to include some sunny intervals and when we awoke it was to blue sky and sun. After breakfast we went for a short walk around the city but within an hour the cloud cover had increased to the point that sunshine was in short supply again.

We then elected to go to Cheddar Gorge. We didn't intend to just drive through the Gorge but to find somewhere to park near the top end of the gorge and walk along the top.

Once we knew that we had started down the gorge, it was just a V-shaped valley at that stage, we looked out for a place to stop and spotted a place where there was a layby on each side of the road so we pulled in to the one on our side. We were looking for a footpath that started near a place called Black Rock and after stopping I looked across the road at the other layby and there on a gate was a notice saying 'Black Rock Nature Reserve' – how's that for luck?

Not only that but the footpath that we were looking for started just a few yards along from where we had stopped and that's where our luck stopped. The footpath, in woodland, turned out to be very rough and rocky and really quite steep. Oh well you can't win them all and it should make the walk more interesting.

The steep rocky bit didn't go on for ever, it just seemed that way, and we emerged onto undulating grassland with the wood continuing on our right.

We saw lots of Devil's Bit Scabious, a pretty blue wild flower, along the way which is an uncommon plant as it is very limited in its distribution. 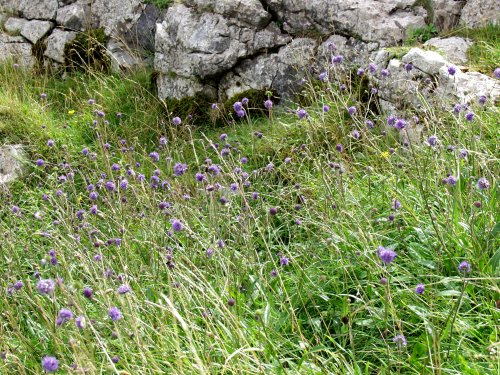 By this time, as you can see in the above picture, we were beginning to see outcrops of the local Carboniferous limestone through which the gorge is cut.

A little further on and the woodland disappeared and the views opened up. It was still rather cloudy at this point but in the distance, from our high viewpoint, we could see the landscape bathed in sunlight. Careful study of the slow moving cloud shadow and we realised that the sunlight was moving our way. We sat on a rock and waited and the sun eventually reached us and this is the view that we had been watching. 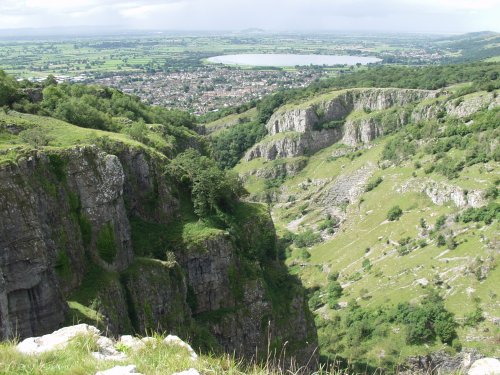 The road through the gorge is quite a long way down at this point. 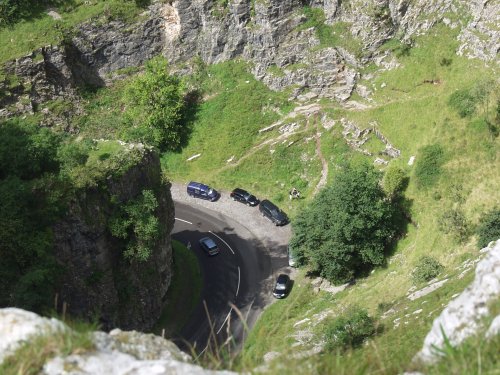 We could now see some pretty grim looking weather headed our way so we started off for the car. Just before we reached the woodland it started to rain, and they were fairly big drops, then we reached the woodland and decided to shelter until the weather had passed. Just as well because a short while later it absolutely fell down. Then the thunder and lightning started. Water started to trickle down path we were on so we moved off to the side a little then the water turned into a small stream.

The storm did eventually pass and we set off again downhill. We decided to drive through the gorge and head for Burrington Combe which we had visited the day before when it would not stop raining. 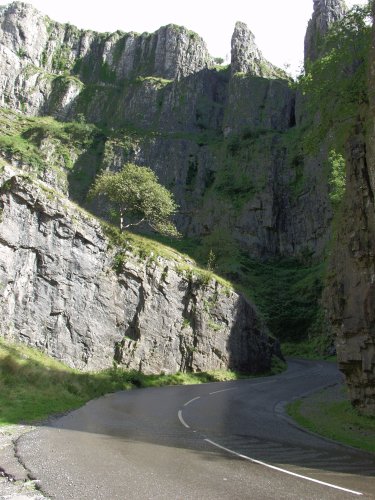 We arrived in Burrington Combe with the sun shining again. This is where I started caving as a youngster and I was interested in looking at the entrances to some of the caves I had been down then. What surprised me was that cave entrances that I remember being in the open were now in woodland and there was a new cave that had not been discovered when I was caving there.

Burrington Combe is less impressive than Cheddar Gorge inasmuch as it doesn't have the vertical cliffs but is still worth exploring. 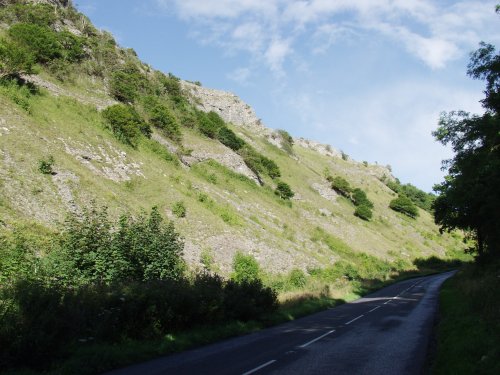 Whilst there we spotted some wild goats. 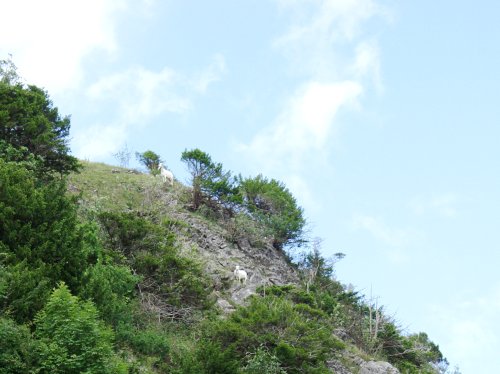 That was our last visit of the day – tomorrow we go home.

Friday was predicted to be a better day and it certainly was when we went for breakfast. After breakfast we quickly packed, paid our bill, and set off for home.

The surprise is that, because the weather was quite good, we decided to visit Stourhead Gardens on the way and it wouldn't mean going out of our way at all.

We spent about two and a half hours there and all we did was walk round the lake – but what a lake! 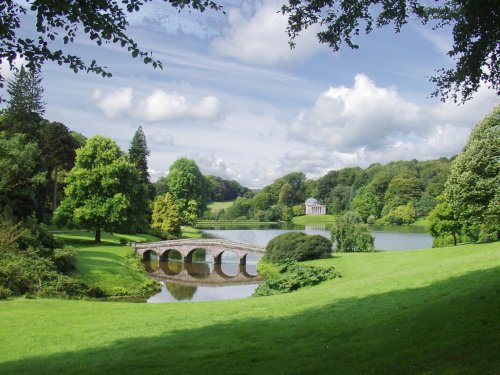 There are 'follies' built around the lake in various places of which 'The Pantheon' is but one. 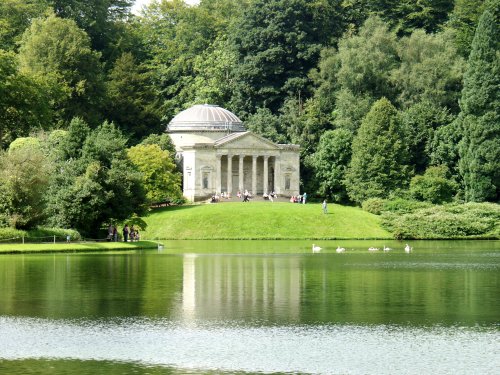 The range of trees and shrubs here is astounding and as one walks around the lake many different vistas appear and disappear.

We finally reached our original starting point and continued on our way home but it just happened that our route took us within sight of Stonehenge and our National Trust membership gets us in free. So in spite of it being a sunny day in August and half the world being there we went in. 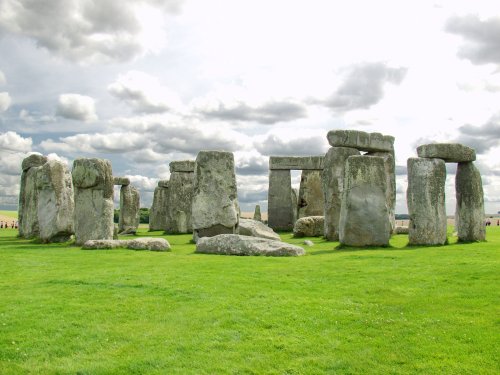 Although visitors are confined to a circular path it does pass quite near the stones at one point. 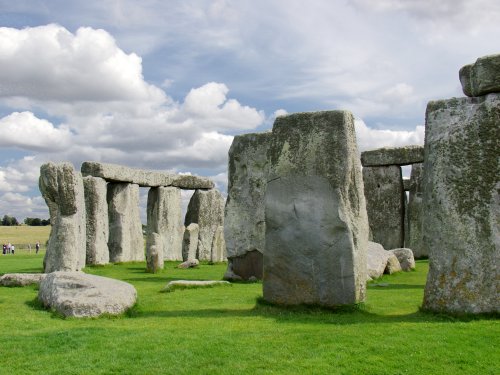 It is spoiled by the numbers of visitors (it is August after all), the constant traffic noise from the two nearby roads, the fence which goes all the way around and the fact that one cannot get near or in among the stones. From the photographic point of view the later disadvantage becomes an advantage otherwise the views of the stones would be spoiled by the crowds of people that would certainly be milling among the stones.

We didn't leave Stonehenge until about 3:00 PM and what should have been a final two and a half hour drive home turned into 4 hours because of the rush hour traffic on the M25 and the Dartford Crossing where the motorway crosses the Thames and passes through toll booths. We were caught in an 11 mile queue for one and a half hours of stop/start driving when we considered ourselves lucky to reach 20 MPH.

Oh the joys of travel.

The weather this morning started as it meant to carry on – cloudy.

We had decided that today we would go to Glastonbury whatever the weather and so that is where we arrived in pouring rain. After what seemed an age the rain did stop so we went for a walk around the town. Glastonbury doesn’t have a great deal to offer – there is a quite nice, small market square with a market cross, the George and Pilgrim Hotel, pretty old from the look of it, the Abbey and, of course, Glastonbury Tor. 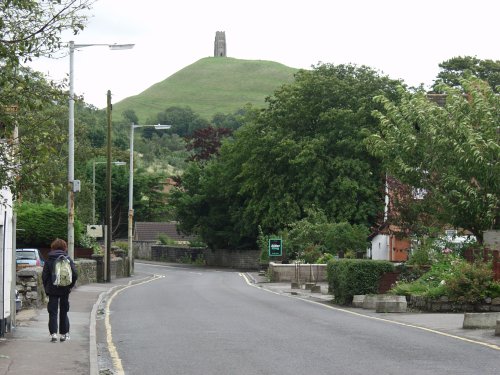 The town has a very generous sprinkling of what I could only describe as Weirdo’s shops which were full of mystic related things. After having lunch here we opted to climb the tor whilst it wasn’t raining and to prove it here is Amanda about to arrive at the very top. 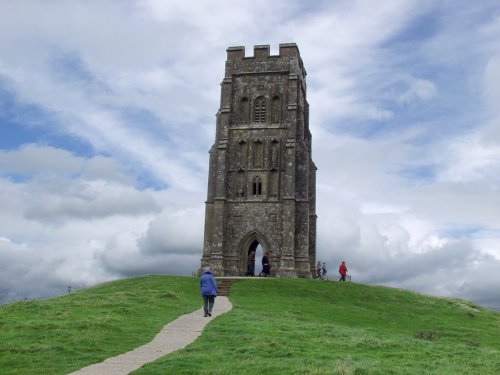 It was a bit breezy on the way up but on arriving at the top we were buffeted by what seemed to be a full gale. Going back down the path so that one descended about 6 feet vertically and it was back to a breeze. Very odd!

We had an excellent view of some very, very murky looking weather approaching the tor. I suggested staying up there and sheltering in the tower until it had passed until Amanda pointed out that it had no roof. Whoops! 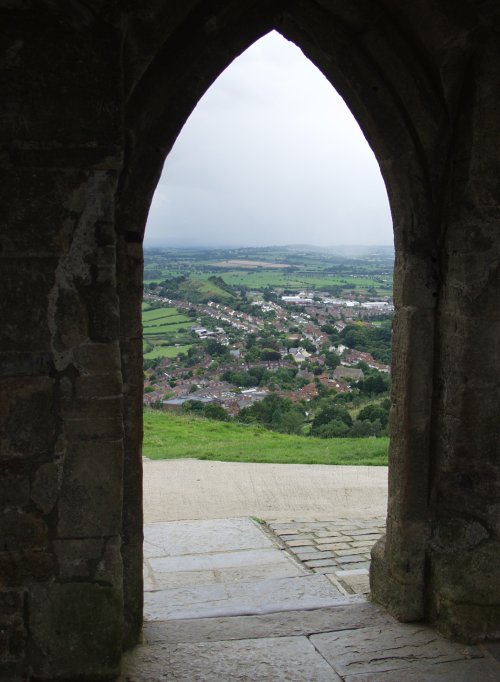 We hurried back down and reached the shelter of the car just before the next downpour.

This must have been our worst day of the week so far for weather. Only one or two photographs of Glastonbury Tor and none at all of Burrington Combe. The weather forecast for tomorrow is only marginally better so we shall have to wait and see.

We woke up this morning to sun and a blue sky. After breakfast we went out to try to take some photographs before the sun disappeared. This is one of the gates into the cathedral precincts and the building just outside is our hotel. 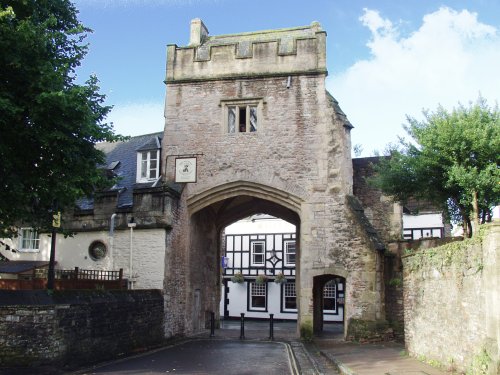 Walking through the cathedral precincts we emerged into the Market Place. Through to the top of High Street we looked back to see this view. 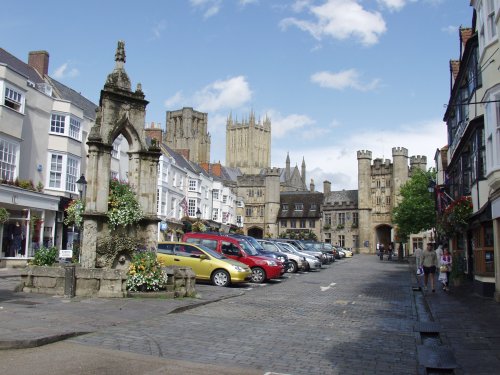 The cathedral West Front is an amazing piece of work with all those carved stone figures. 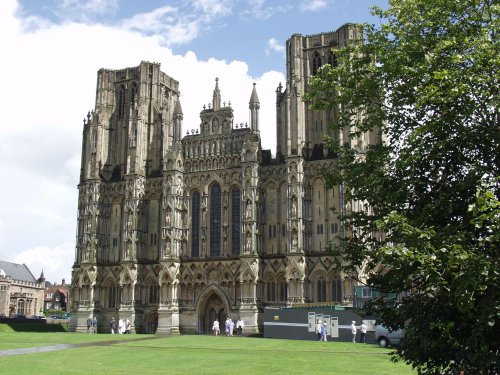 We stopped for a lunch break and then continued our wanderings. Needless to say this mornings session was interrupted by banks of cloud coming across and obscuring the sun for 30 minutes or so at a time and this afternoon we had two thunderstorms the second including hail. This is an English summer after all.

You may have heard of the swans which live on the moat surrounding the Bishop’s Palace and which have learned to pull a rope to ring a bell when they want food. Here one of the current brood of cygnets has learned the trick already even though they can only be 2-3 months old. When the bell is rung food is thrown out of the open window. You should be able to see that it has hold of the rope with its bill with the bell just above it. 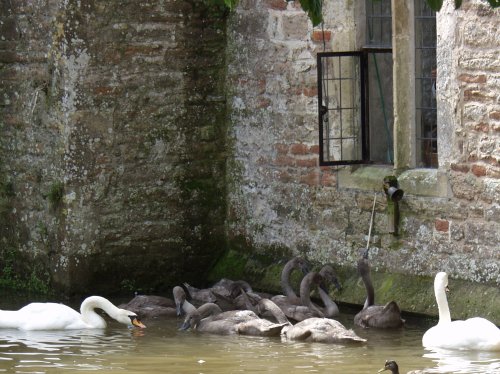 Tomorrow, I suppose, we shall have some more of this wonderful August weather ( I hope you recognise sarcasm when you see it).

We set off from home in sunshine and as we progressed further west so the amount of cloud increased. We arrived in Wells at around 2 o’clock, 4 hours later, under total cloud cover complete with the occasional shower.

After a quick lunch we went for a walk round the city. This is England’s smallest city and, being a city, it has a cathedral. A walk around the outside soon convinced us that this was indeed an impressive cathedral. The city centre certainly is compact with some attractive corners.

With the weather being the way it was I didn’t take any pictures on our brief walk but after dinner just before it was nearly dark I took this picture of the cathedral West Front partly lit by the surrounding street lights. 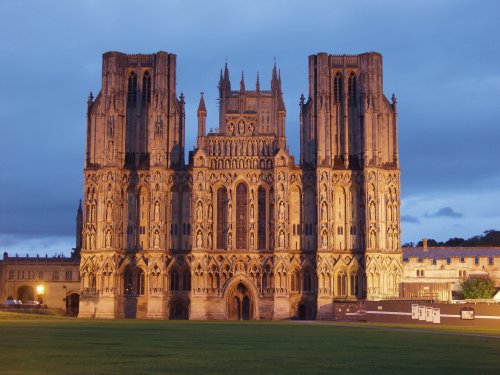 The next day (today) it was still cloudy with more rain forecast so we thought that indoors would be good. A trip to see the inside of the cathedral was our plan. We spent a few hours there and finished our visit with lunch in the cathedral refectory. This was the first photograph I took. 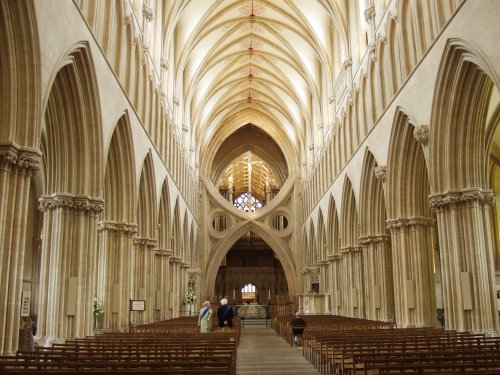 We also had a look round the Bishop’s palace after lunch both inside and outside. No pictures in the garden though as it was raining but it would certainly provide some good pictures in the sun. If we get any sun this week and we happen to be in Wells at the time then a return visit to the Bishop’s Palace gardens will be on the cards as will some outside pictures of the cathedral.

We shall have to wait and see what the weather brings.