This turned out to be a trip to anywhere! The current spell of fine weather was forecast to start from Tuesday 27th September, which it did, and to go on for about 7 days. Unfortunately we had a funeral to attend on Tuesday and I had a long standing dental appointment on the Wednesday so those two days were out. We didn't trust the forecast anyway because 'they' had got it wrong so many times recently so we waited until Wednesday to see how the forecast changed.

We were originally planning to go go up to the Yorkshire Dales but by Wednesday the forecast for the north had changed for the worse so we thought we had better stick to the southern half of the country. Our next choice was going to be Great Malvern in Worcestershire but it looks as though most of the country had the same idea as us, to go away while the weather was fine, and we couldn't find any suitable accommodation.

Next choice was Swanage in Dorset. Same problem – no accommodation available. We were beginning to run out of ideas and Amanda said, as an aside, that she would like to stay in Mere in Wilshire sometime. We had stopped in Mere once, to have lunch, on our way to Porlock Weir in Somerset and she was rather taken with the little town so I though that I'd try there to see if they had any available accommodation. They did and so here we are after an amazingly clear run from home even though it involved a lengthy spell on the M25 which is often called the largest car park in the country.

As we came over the hill at Amesbury we saw the familiar sight of Stonehenge in the distance. If you can mentally ignore the A303 stretching out in front of you then you can imagine how it once looked with Salisbury Plain spreading out all around it. We didn't stop because we had other plans for this afternoon.

We arrived in Mere just before 1 o'clock, booked in to our B&B, had a snack lunch and set off. We were headed for Stourhead Gardens (National Trust) and we were going to walk 2.75 miles each way plus whatever we walked around the garden.

From Mere we headed out via Castle Hill. 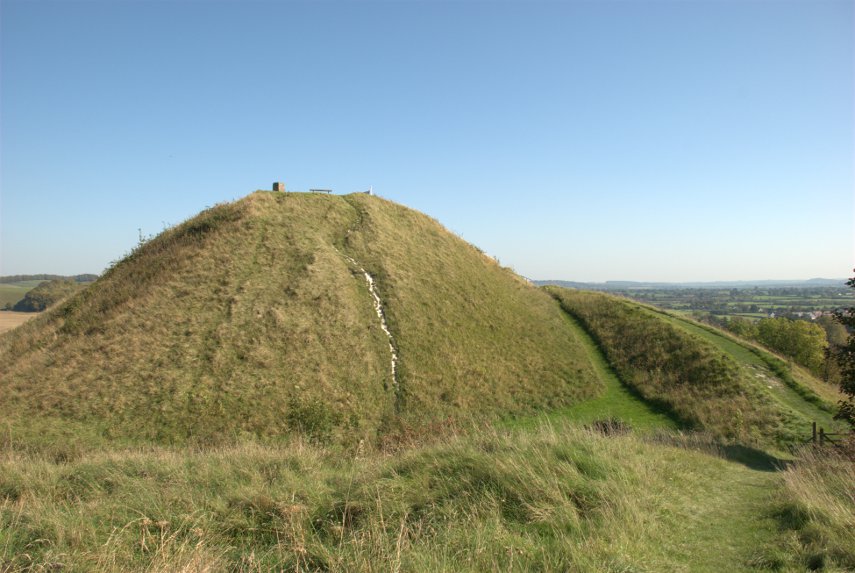 It was a very easy climb (Translation: Puff, Wheeze, Gasp. I hope nobody sees me on my hands and knees.).

There used to be a castle here, hence the name, but all the stone has long since been removed probably to build the town down below. This is Mere from castle Hill. 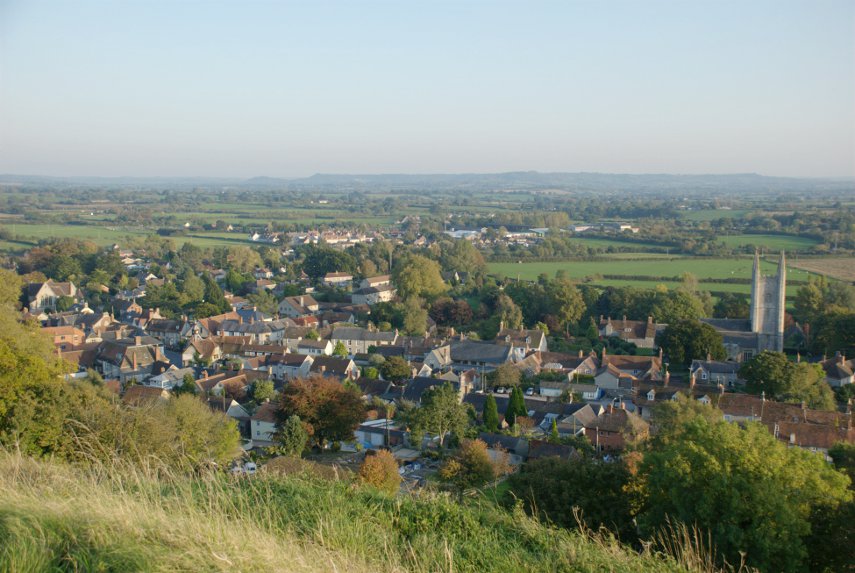 That church tower, as we discovered later, is absolutely massive. Having got this far we continued along the ridge admiring the views over the surrounding countryside. 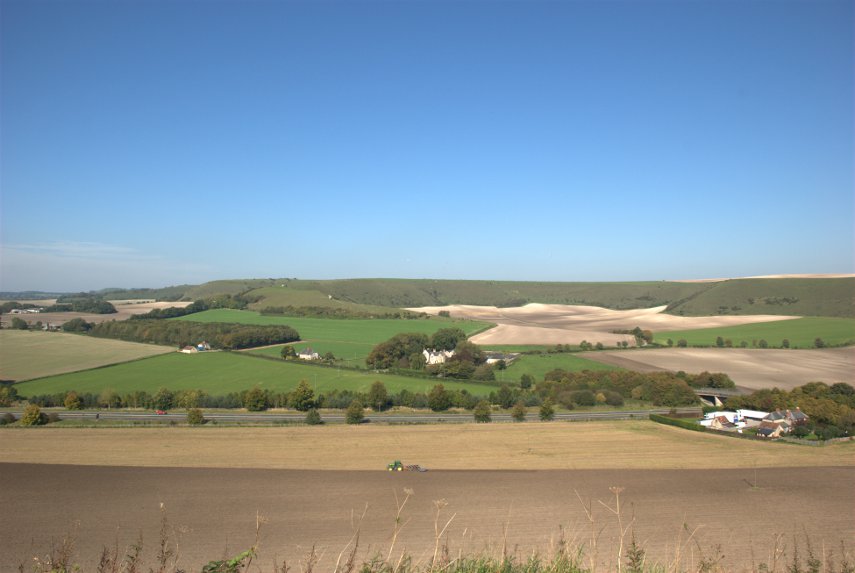 Just beyond the tractor in the foreground you should be able to see the A303, the road which goes past Stonehenge and which brought us here. On the other side of the A303 is the high ground of Whitesheet Downs and its Iron Age hill fort. We are headed out of that view to the left.

Back down off Castle Hill we reach ground level once again, cross the A303 on a footbridge, and head off across the fields. But wait, what's this? Amanda wearing shorts? Well it was hot, somewhere in the low 80s, and that footpath stretches a long way into the distance with Whitesheet Down off to our right. 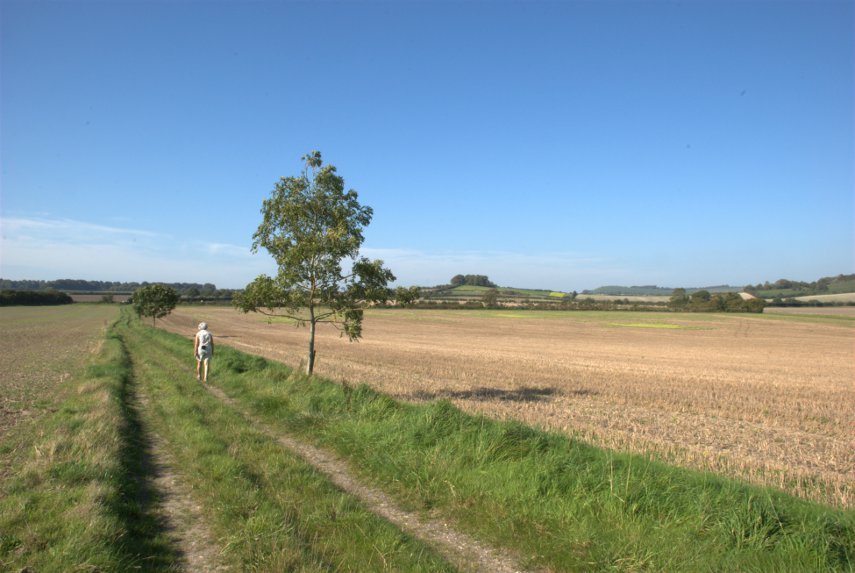 Looking back we get a good view of Castle Hill (did we really go up there?) and can even see the Union Flag flying on the top. 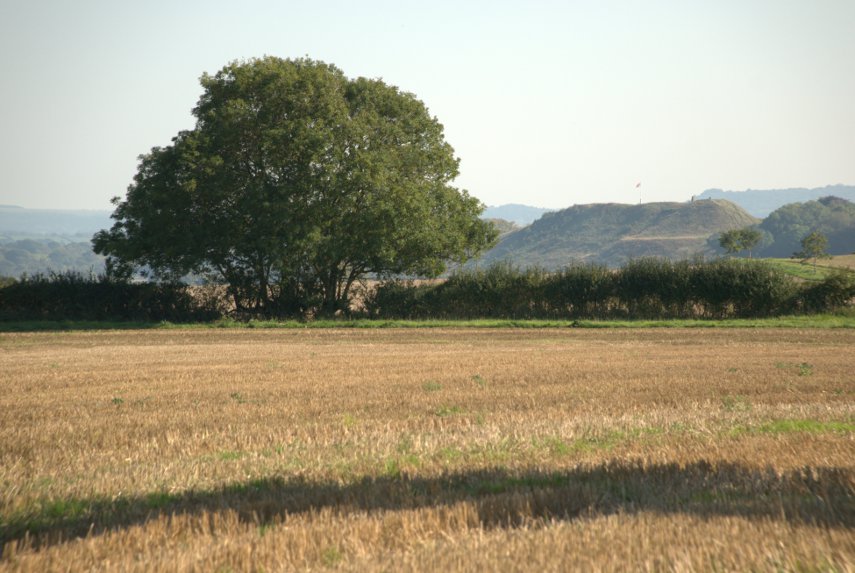 We finally stagger, hot and thirsty, into the cafe at Stourhead for a brief respite then on into the garden. 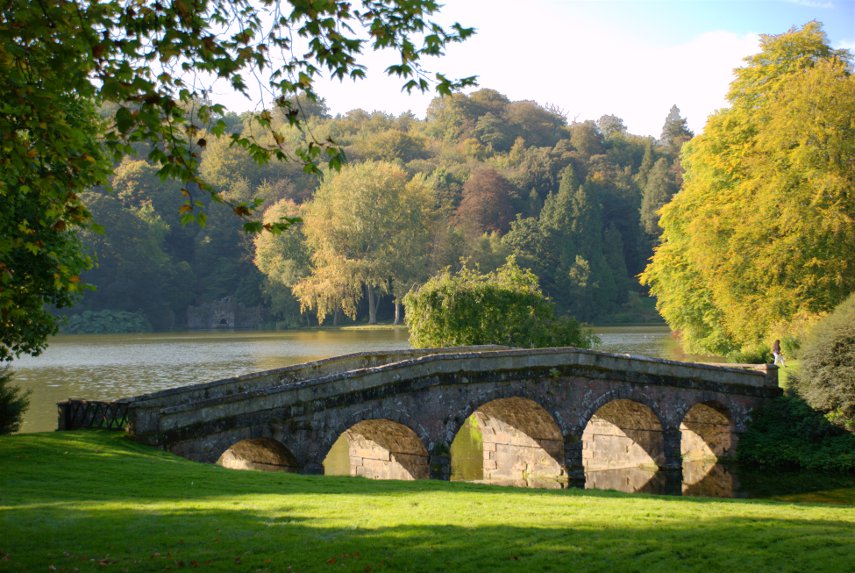 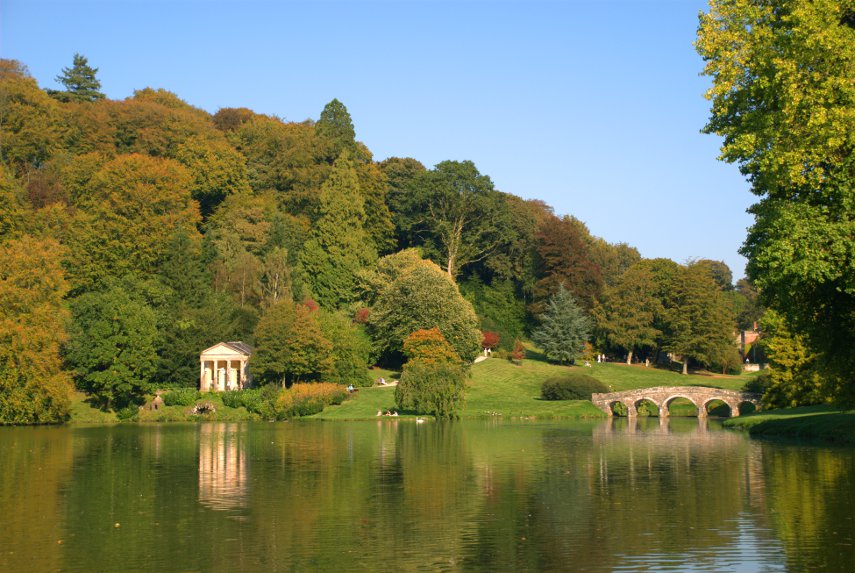 The lighting looked amazing at this time of year together with the fact that the sun was getting noticeably low by 3:30 PM. The last time we were here was August 2008, and in the morning, so on that occasion the sun was lighting the opposite side of the bridge.

The Temple of Apollo was also beautifully lit compared with the photograph taken on our previous visit. 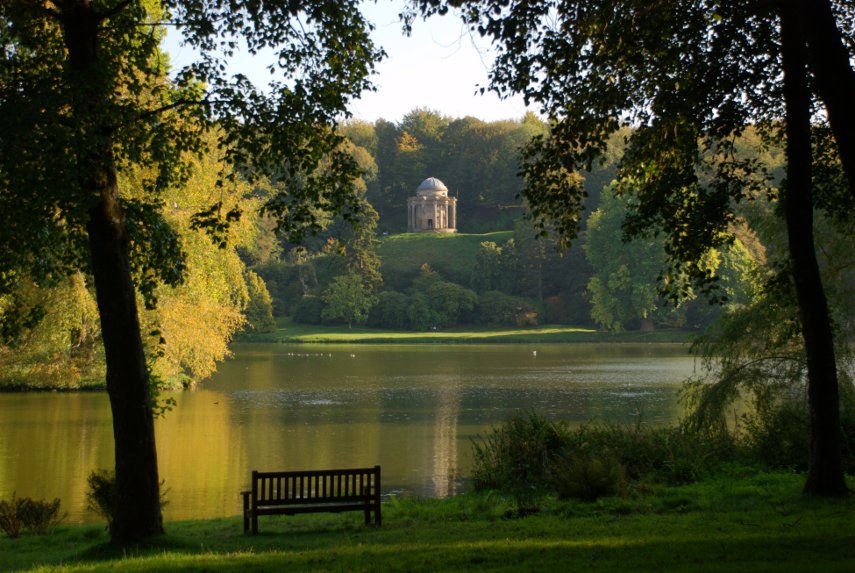 You can see those previous photographs on the main web site.

After walking about 1.5 miles around the lake we decided we'd better start for 'home' and set off again on the footpath back to Mere. The sun was getting quite low by this time and the views across the fields to Castle Hill were quite dramatic with the long shadows. 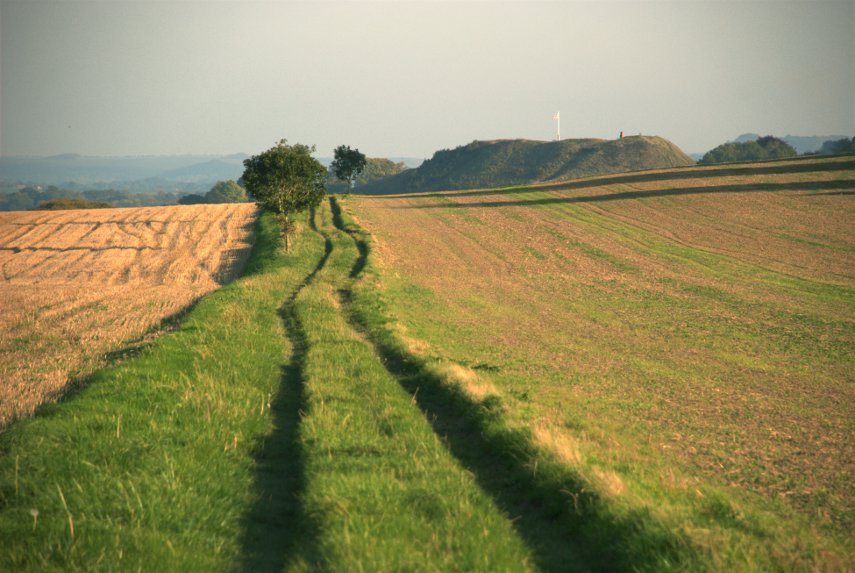 We arrived back at our B&B rather tired but very satisfied with our afternoon having walked a total of 7 miles. Tomorrow is another day.