We left for Hadleigh, Suffolk at around 9:00 AM this morning in pouring rain. The roads were very wet and on the winding road we would sometimes go through a very large puddle on the near-side of the road sending a sheet of water cascading over the windscreen. By the time we had parked in Hadleigh the rain, amazingly, had stopped.

We met Richard and Jane, two people from the ‘Friends of Hadleigh Guildhall’, who were going to show us around, tell us about the hall and let me take some photographs. Good weather for indoor photography. :)

The Guildhall is actually made from two different buildings which were once separate but are now joined – the Market Hall and the Guildhall. We started in the Guildhall which was built in the latter half of the 15th century. Notice the vertical posts which run from each roof truss up to the roof. These are Crown Posts each of which has two arched braces at the top where it joins the roof. 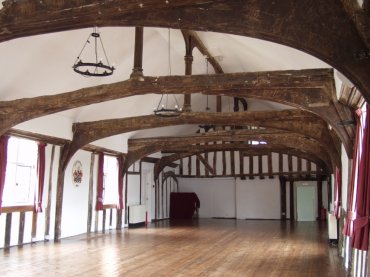 Between the roof trusses at the far end you will be able to see some light which is coming through a small window. This window is in an internal wall and the room behind it is on the top floor of what was the Market hall. That room also looks out over the churchyard at the front of the building and that is where we went next.

This room also has a Crown Post but with four arched braces at the top. At the far end of the room, on the right-hand edge of one of the vertical beams, you can see some of the pegs used in joining the wood sections. If this structure was meant to be seen those pegs would normally be trimmed flush.

The title of this article is a type of joint used by English carpenters from the late 14th century until around 1600 for joining horizontal lengths of timber – a useful feature for dating buildings. 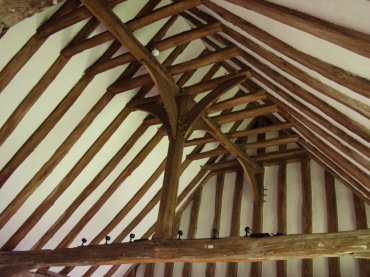 We also saw a number of other interesting features which were not suitable for photographing. There is also a delightful little garden at the back and, no, I didn’t photograph it in this weather but I intend going back in better weather to do that.

We had coffee with Richard and Jane and chatted about the Guildhall from when it was in a very poor state in the 1960s to it’s later restoration. If you’re ever in Suffolk, you are missing a lot if you’re not, go and have a look round Hadleigh.

There will be more details of Hadleigh Guildhall appearing in the Hadleigh pages on the web site soon.