We are now back from our trip to Lavenham and you may have noticed the absence of a blow by blow account. The hotel did have free wireless broadband available to guests but, as happened in Norwich, it wasn't working properly and so I couldn't use it. It was still out of order when we left.

We arrived in Lavenham on Sunday last at about 11:30 in the morning and, as we expected, our room at the Swan Inn wasn't going to be ready until about 2:00 in the afternoon. So we left our luggage with the hotel and wandered off around the town.

In case you wonder what the Swan is like then this is it (built in the 1400s). 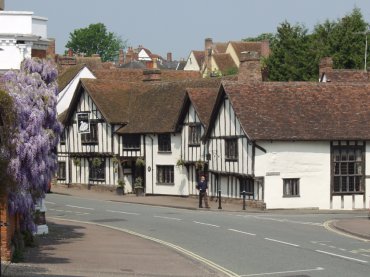 One of the nice things about Lavenham is that whichever street you choose to walk along it will almost certainly have a lot of ancient buildings in it. This time we chose to go out of the back of the hotel into Lady Street and up a short way to the Square to look around the many and various nice old buildings including the Guildhall (built in 1530) and owned by the National Trust. 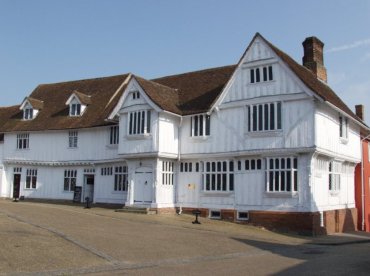 By now it was time for lunch and we went back into High Street and found a little teashop called 'Chilli and Chives' and had a light lunch including cups of tea and coffee.

After lunch we walked north along High Street and back admiring all the inevitable ancient buildings and then turned up Hall Road just to see if there was a 'Hall' and indeed there was. A lovely, large old house with very attractive grounds including a small lake with black swans.

We noticed that at the bottom end of the hall's grounds there was a public footpath running towards the church. Following that we emerged in the churchyard and so went into the rather cathedral-like church.

It has a rather imposing entrance porch. 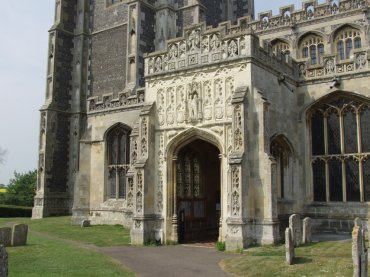 It's even more imposing inside but I didn't take any interior pictures on this visit as it would require a tripod and that was still in the hotel. I made a mental note to return tomorrow with the said tripod.

It was coming up to afternoon tea time so we walked back to the hotel. After a brief visit to our room we sat down in one of the cosy lounge areas and ordered scones with butter, jam and clotted cream. Whilst we were waiting for our tea to arrive three other people came in and sat nearby. We couldn't help but overhear what they were saying and deduced from their accents that they were Americans. They chose to have the larger version of tea so that, in addition to what we had, theirs included finger sandwiches and pastries. When it arrived, on a tall cake stand in three layers, they seemed so pleased with it they were taking photographs of each other to include the cake stand. They obviously couldn't take a picture with all three of them in it so I volunteered to do it for them and they gratefully accepted my offer.

Our scones were some of the best we'd had – very yummy with jam and clotted cream.

After tea Amanda decided to have a bath so I went out for another walk around. Whilst wandering around the Square again I met the same three Americans from the hotel. It turned out that they had come over to collect their daughter from Law School in London and because the man had been stationed near Lavenham with the American air force about 20 years ago they had driven up here to look at old haunts and they felt that little had changed.

So back to the hotel to try the broadband.

I had, as mentioned earlier, to take my laptop into the lounge to try this and using the information given to me by the hotel tried to connect to the Internet. After fiddling about for 30 minutes I had to admit defeat. I went back to reception and asked to see their connecting instructions again. "Are you having trouble" said the receptionist – I said that I was. "Ah", she said, "we appear to have a problem with that". I wish I'd known before I started as it would have saved a lot of frustration. They were supposed to be getting a man in next day to fix it.

I went back to our room and had a look at the photographs I'd taken during the day after which it was time to get ready for dinner. 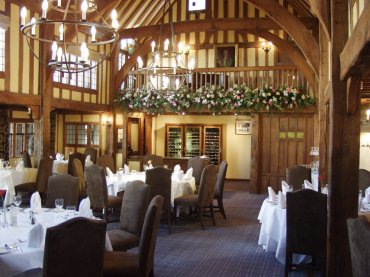 Oak beams everywhere and a minstrels' gallery (but no minstrel – pity). After dinner we went back to our room and, eventually, to bed. My mistake at this point was to pull the curtains completely closed.

I woke the following morning when it was barely light and concluded that it must be around 5:00 AM but on looking at my watch I saw that it was actually 8:00 AM. The curtains were so efficient at blocking the light that the room was still virtually dark although it was broad daylight outside. Oops! The next night I left a small gap between the curtains.

We had arranged to meet a lady at Little Hall in the Square so that I could take some interior photographs today when the hall is normally closed to visitors. 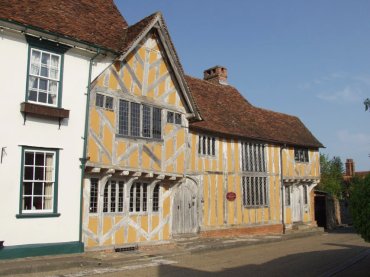 This is just one of the rooms.

The other interiors will appear on the web site in due course.

After this it was time for lunch and this time we went to a little teashop in Water Street called 'Sweetmeats'. The range of offerings here was pretty amazing. I had a bouillabaisse which is described as a highly seasoned fish stew made from at least two kinds of fish and this had much more than two kinds – very tasty indeed. Amanda had Chicken Madras which she thought was very good. The tea room is upstairs, has only five tables and is run by a trained chef. This place is a little gem so if you are ever in Lavenham – try it.

Off to the church with a tripod this time to take some interior pictures. Just look at that stone carving on the wall of the nave above the arches 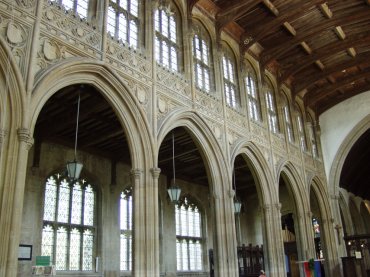 and at the risk of straining your neck look at the carving on some of the roof beams above the nave. 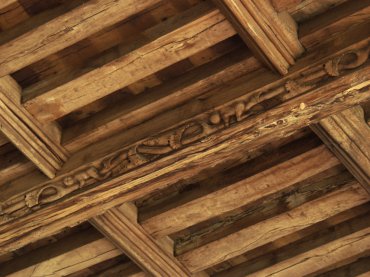 After the church we had yet another walk around the streets – we never get tired of doing that in Lavenham. Buildings in Lavenham crooked? Did I say that? 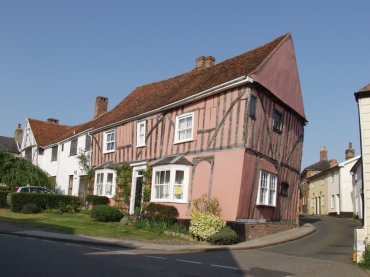 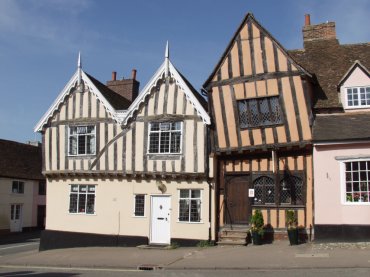 No it's not the camera angle and, no, they weren't built that way. I may look like that when I'm that old.

Later, back at the hotel, we decided to try the bar meals at The Swan in the less formal surroundings of the lounge and we were not disappointed. The menu was different from that of the restaurant but just as tasty and just as nicely presented.

And so to bed (No the broadband problem wasn't fixed today).

We left Lavenham this morning to return home but that didn't stop us from sightseeing on the way.

First stop was Cavendish. A small village about 12 miles from Lavenham slightly south of west. This view is a well known and often used view of Cavendish to illustrate Suffolk and one can easily see why. 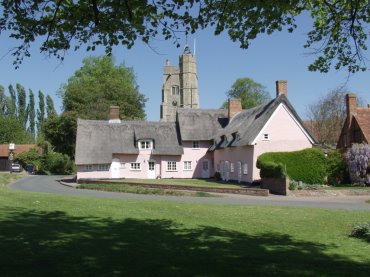 We love some of these names – 'Nether Hall'. Lovely building too. 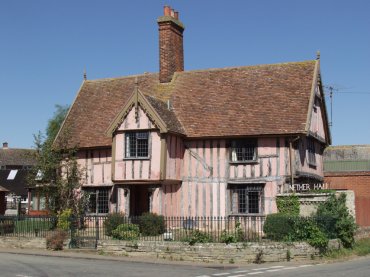 Leaving Cavendish and moving further west another three miles we arrive at Clare where we find the Old House. I hope that you will be able to see the intricate moulded patterns on the house walls. 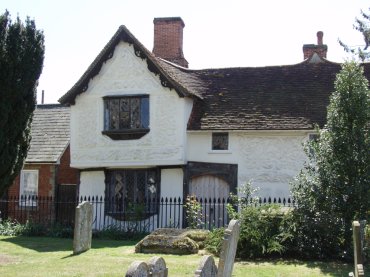 Just in case it's not easy to see in the smallish picture here is an enlargement of part of the same picture. We had lunch in a small tearoom called 'Cafe Clare' which we can also recommend if you are ever round that way.

We made our way home from here after 3 delightful and interesting days.