I'm not talking about Norwich when I say 'We got there in the end' I'm talking about connecting to the Internet from the hotel. I had a lot of trouble yesterday, after we arrived in Norwich, trying to connect via the hotel's wireless broadband and the receptionist could not give me any advice on what might be wrong. The manager wasn't in yesterday but she was in today and after hearing of my problems suggested that she reboot their computer – and here I am connected.

I am now a bit later than I intended in updating the Blog. We arrived in Norwich yesterday, Monday, about mid-day after an uneventful journey and found the hotel quite easily. It is situated near the inner ring road which encircles the city centre and we are probably within walking distance for most things.

We transferred our luggage to our room and went straight out into the sunshine. Making our way towards the cathedral we went via Elm Hill. 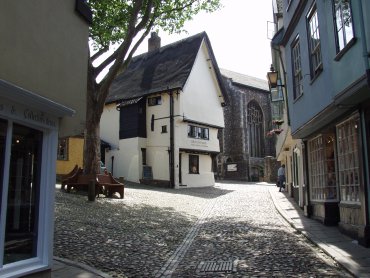 Elm hill is a perfectly preserved medieval cobbled street. The white building on the bend is The Britons Arms, a coffee house and restaurant, where we had lunch. We both had Home Made Pork Pie with salad and it was the best pork pie we had ever had. If you have had a pork pie from your local shop then forget it – this was absolutely streets and streets ahead of that. On that meal alone we would strongly recommend this restaurant.

Then we walked onward and into the Cathedral Close. This cathedral has the second highest spire, after Salisbury, in the country. 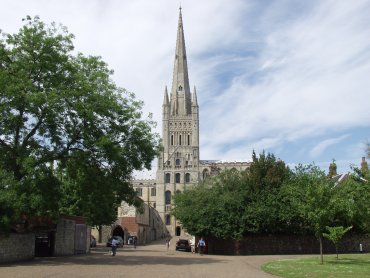 After leaving the cathedral we walked along the Riverside Walk by the River Wensum. 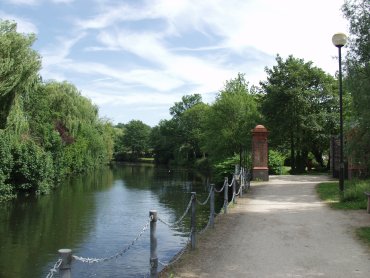 Turning back through the city centre we went past the castle. 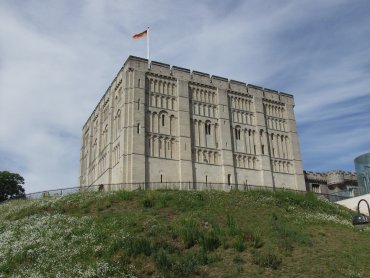 I have to say that Norwich seems to be very good shopping centre where one could so easily be encouraged to spend lots of money.

Monday was very warm and much too humid for our liking but there was plenty of sun and blue skies.