The cloudy weather is still with us although the weather forecast says that it will stay dry.

We decide to head north on the train as Norwich and Norfolk does have some useful public transport links. There is a line from Norwich which runs south-east through the Norfolk Broads to Great Yarmouth and Lowestoft called ‘The Wherries Line’ and another line which runs north to Cromer and Sheringham called ‘The Bittern Line’. We chose the Bittern Line because at Sheringham it connects with the North Norfolk Railway which is a heritage line running steam trains. There are also two bus services which supplement these rail lines. There is ‘The Broads Hopper’, which runs through the Broads and connects the Wherries Line with the Bittern Line and there is also ‘The Coast Hopper’ which extends the Bittern Line by travelling west from Cromer or Sheringham through various of the coastal villages to Hunstanton and Kings Lynn.

Our train was late getting in to Norwich Station and so was 7 minutes late in leaving but that was not a problem and the journey to Sheringham was about an hour. The train managed to make up a bit of time on the way so we were only about 2 minutes late arriving. There was also a change in the weather which gave us some patches of blue sky and a watery sun.

The first thing we saw when walking out of the station was a plume of smoke in the distance and this was the cause. 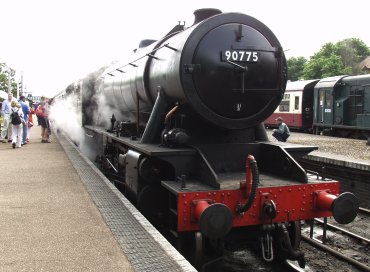 We bought tickets to the next station, Weybourne, which was a journey of only 7 minutes where we alighted. This station is over a half-mile from the village which is where we were headed. It was a very pleasant walk along a typically quiet Norfolk lane. 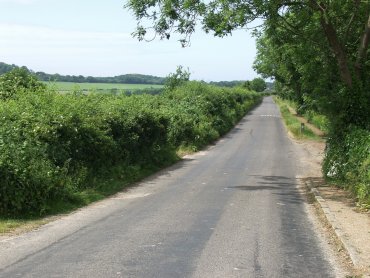 Arriving in the village we headed for the church which is unusual in that it has the remains of an ancient priory attached to it. 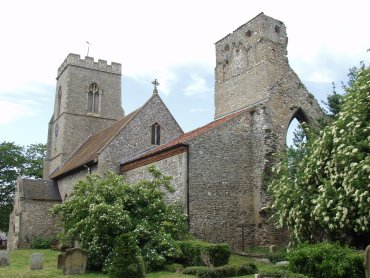 Just along the road is Weybourne Mill which is no longer a working mill and has been converted to a house which now offers Bed and Breakfast. We intended to catch the Coast Hopper bus back to Sheringham so we went back to the bus stop near the church and after a short wait caught the bus and were soon back in Sheringham.

The train took us back to Norwich which, incidentally, has a rather imposing station. 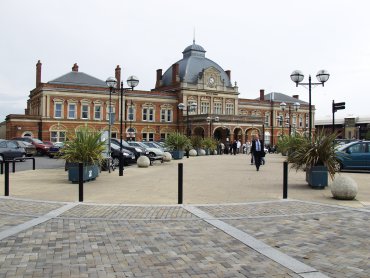