A week ago I said we planned to return to Hampstead one day; well this is one day! Same place – different bits.

It all started so well. Today (Tuesday) was forecast to be this week's sunny day and, surprisingly, that is how it turned out; right to the very end. We went to Hampstead Station (Northern Line) via the tube and emerged into the sunlight. 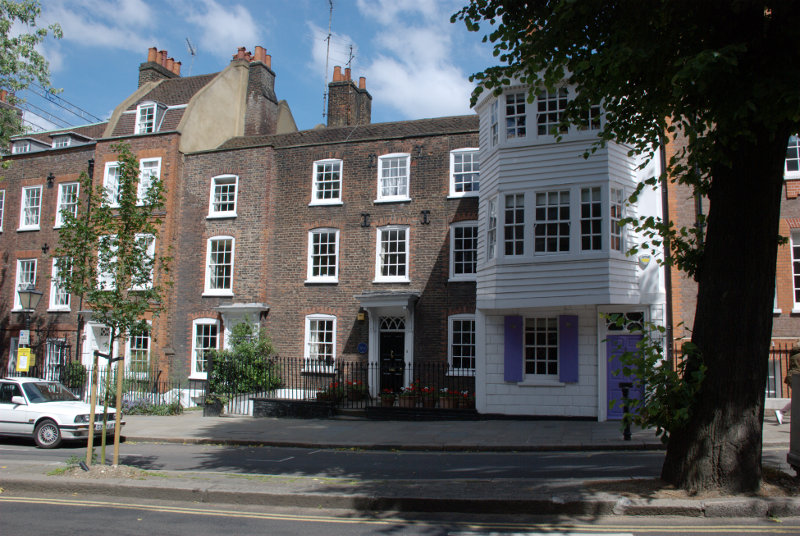 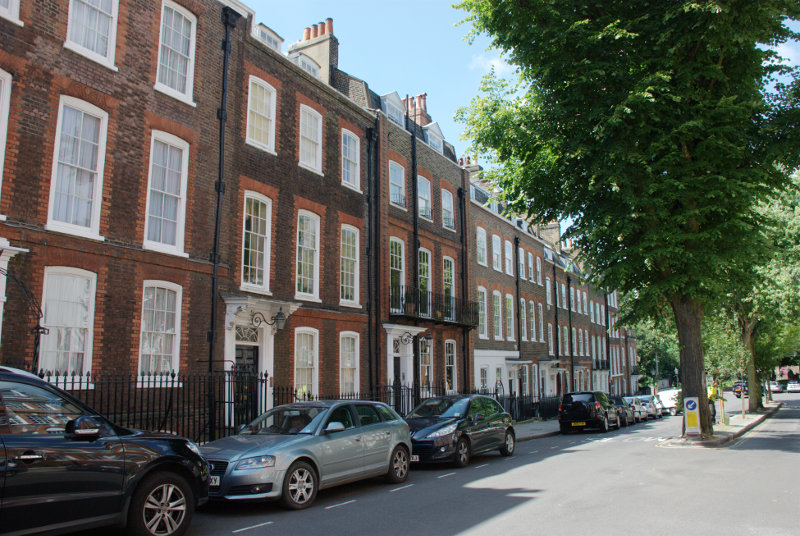 And it wasn't called Church Walk for nothing you know. 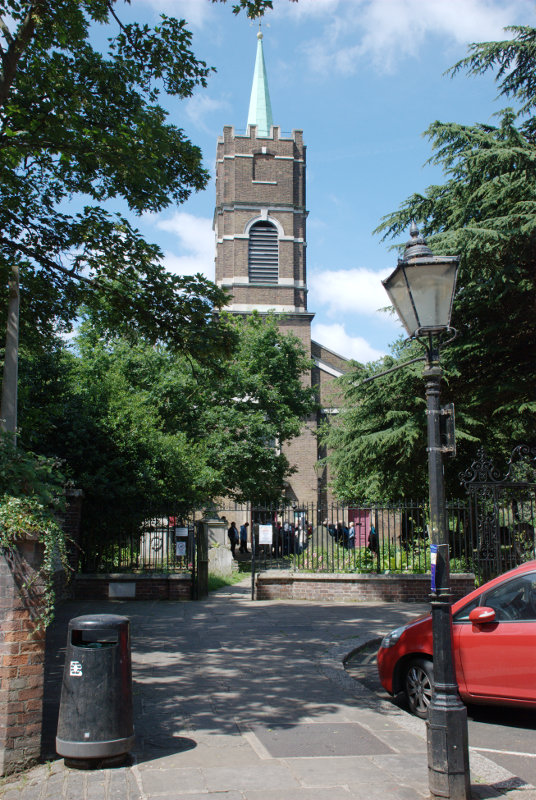 It was a Georgian church and we didn't go inside as it was about to be invaded by a large party of what appeared to be visitors on a tour of Hampstead. We didn't see them again.

We turned right further along into Holly Walk which runs alongside a separate piece of ground used as the churchyard and you should notice a couple of large memorials just behind the railings in the next picture. 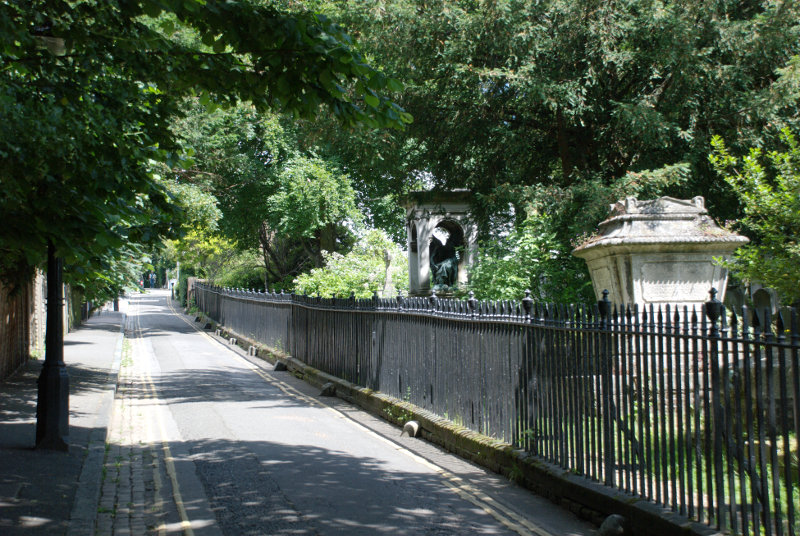 That lane led us up to Mount Vernon where we noticed this house together with another rather nice little lane called Holly Berry Lane. The plaque on the wall says: 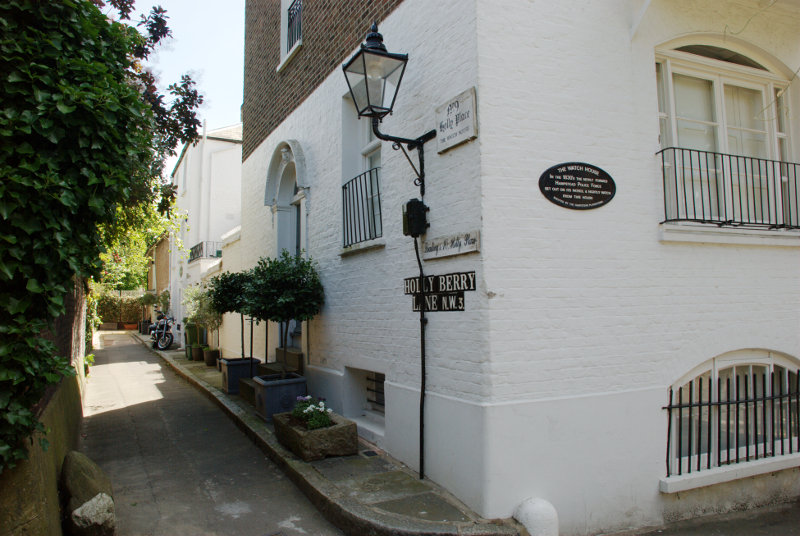 It was an arresting sight and so was looking back down Church Walk from the top. 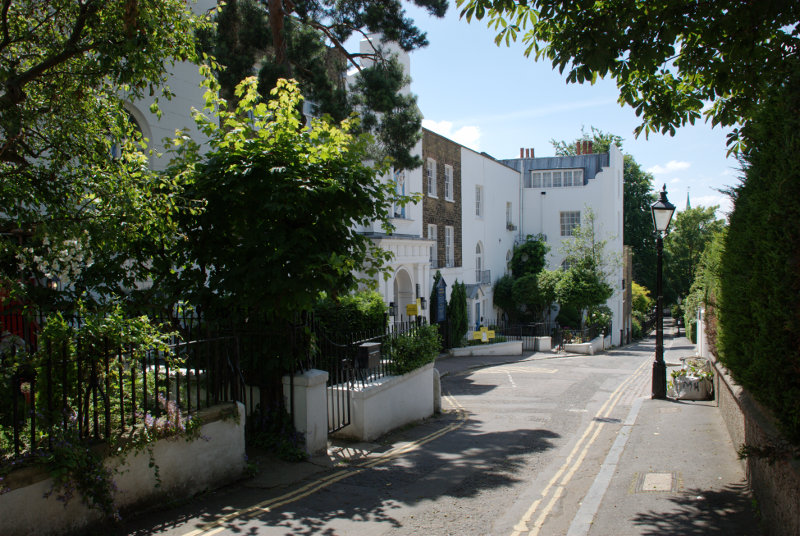 There are plenty of nice little corners in this part of Hampstead and it is hilly. 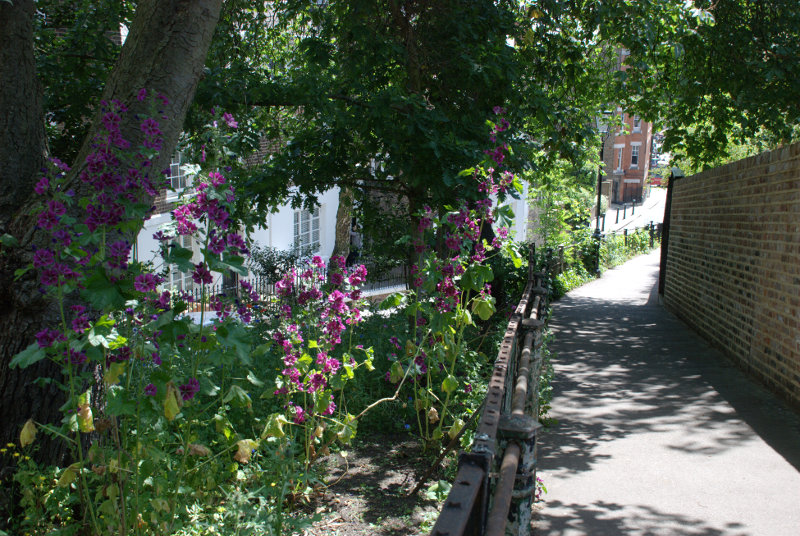 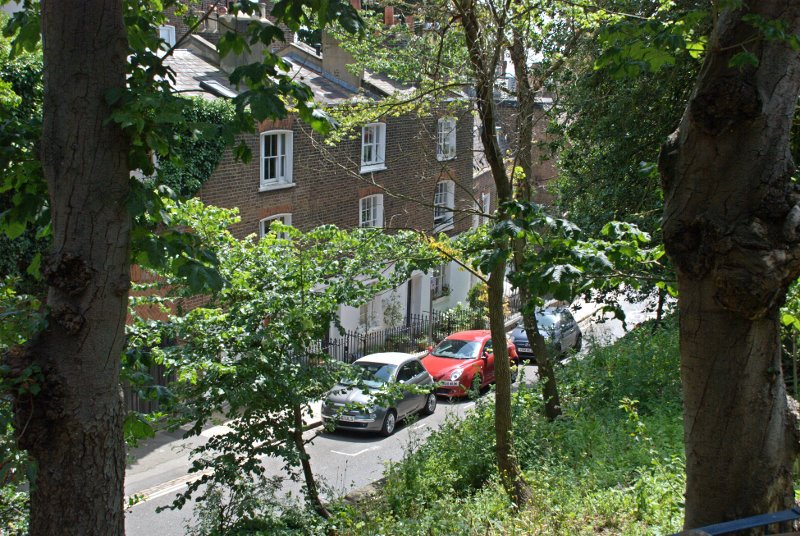 One of the things we had planned to do on our next visit to Hampstead was to see two National Trust properties – 2 Willow Road and Fenton House. We discovered before we left home that they are both closed Mondays and Tuesdays and, of course, this weeks sunny day was Tuesday so we didn't even go near 2 Willow Road but Fenton House was in this area so we caught a glimpse of it behind its rather fancy gates. Next time perhaps? 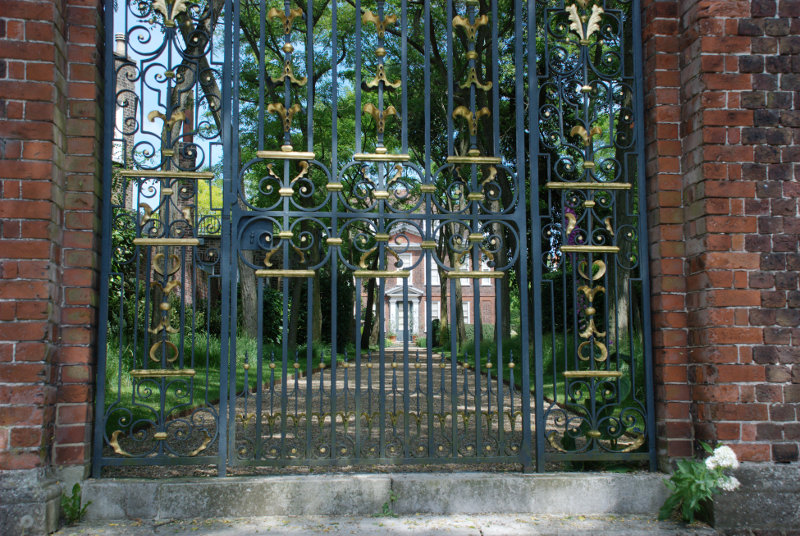 We saw the Holly Bush Inn which is Georgian and a mere 200 years old. It did, however, have a menu posted outside and the various dishes did sound nice but it was too early for lunch so we passed by. 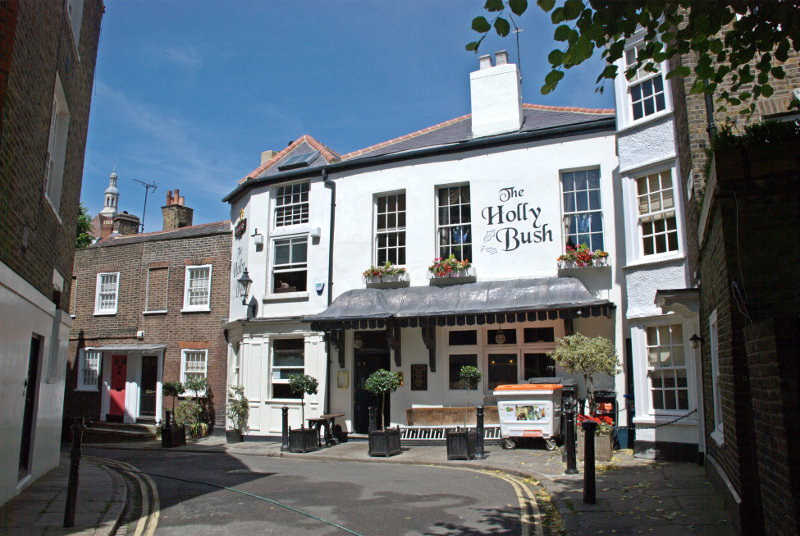 We were on top of a hill here and we wanted to head for Flask Walk and Well Walk which were on the other side of Hampstead High Street so we needed to head down the hill. From High Street we turned into Back Lane 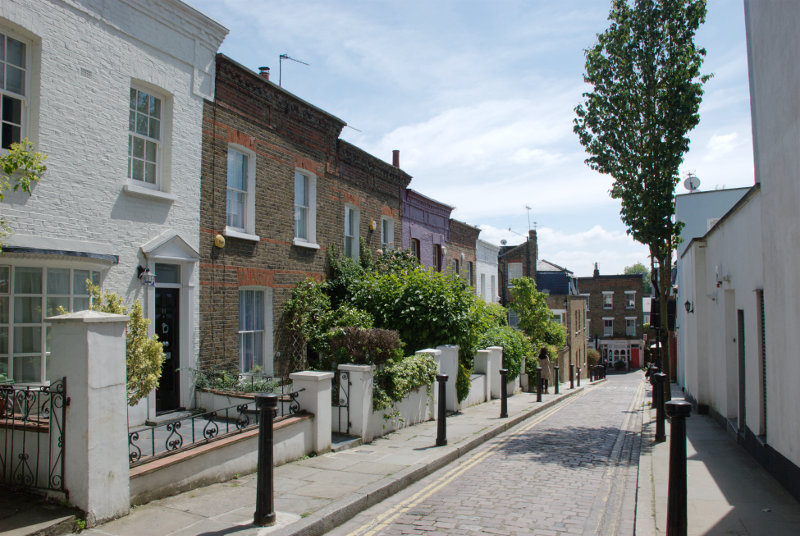 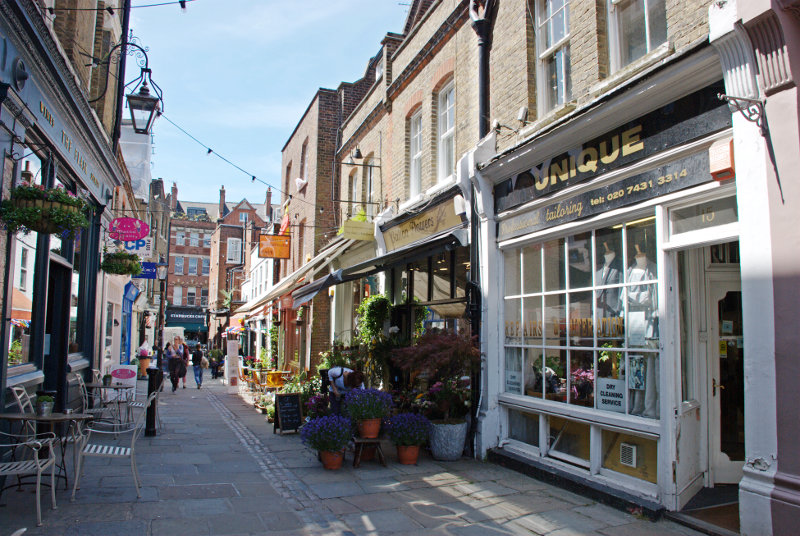 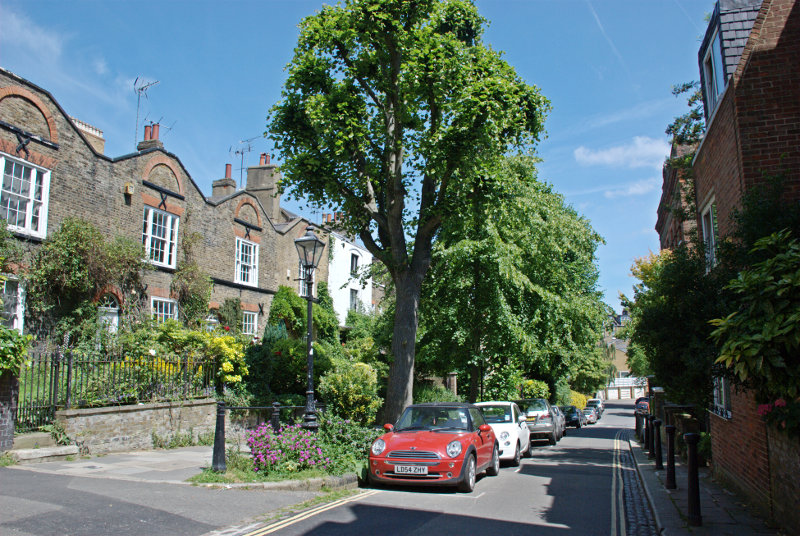 Why 'Flask' Walk? It recalls the centuries-old practice of Londoners climbing up to the two villages, Hampstead and Highgate, to fill leather flasks with pure spring water rather than risk the cholera-riddled infected waters of London.

On the way down Flask Walk we came across this building. Since many of the worker's homes in Victorian Hampstead had no running water, this public building provided both drinking water and facilities for bathing. 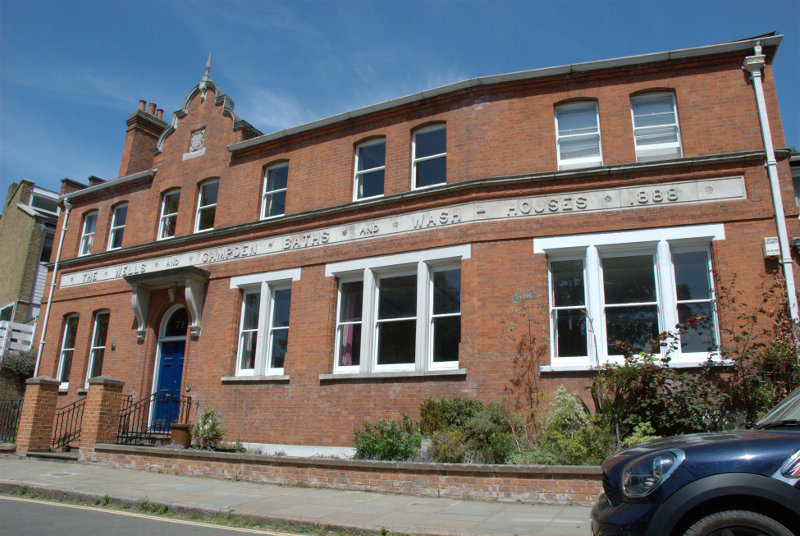 I don't need to tell you the date because it's on the building. 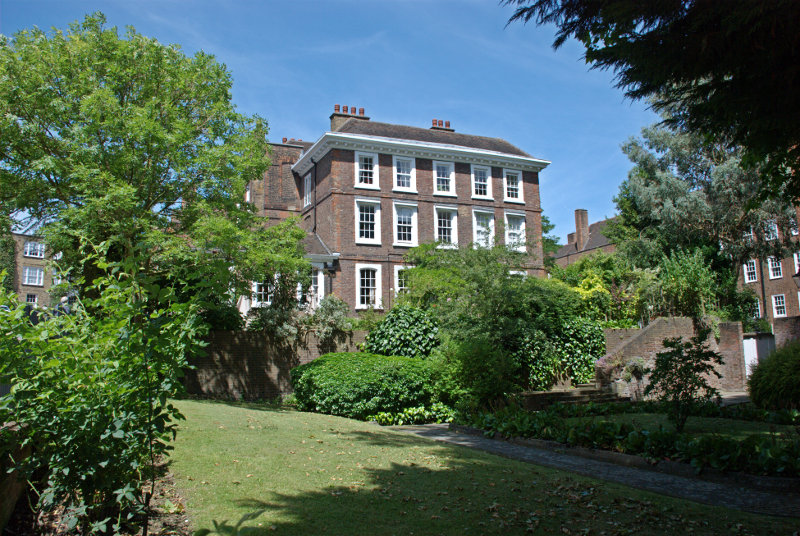 We joined Well Walk and went past one of the original Chalybeate wells originally promoted for the medicinal value of the chalybeate waters (water impregnated with iron). Keats, the poet, and Constable, the painter, both lived in this area for a time. 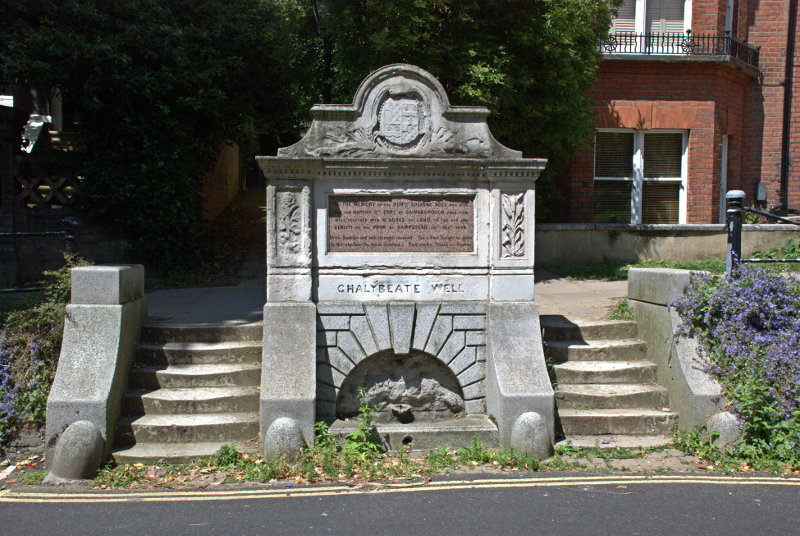 We eventually joined East Heath Road on the edge of the 791 acres of Hampstead Heath. We were headed for one of the places we missed last time because we became lost on the heath and eventually ran out of time. So will we get lost this time? Of course not. *cough*

We started off along a well marked path in a wooded part of the heath. 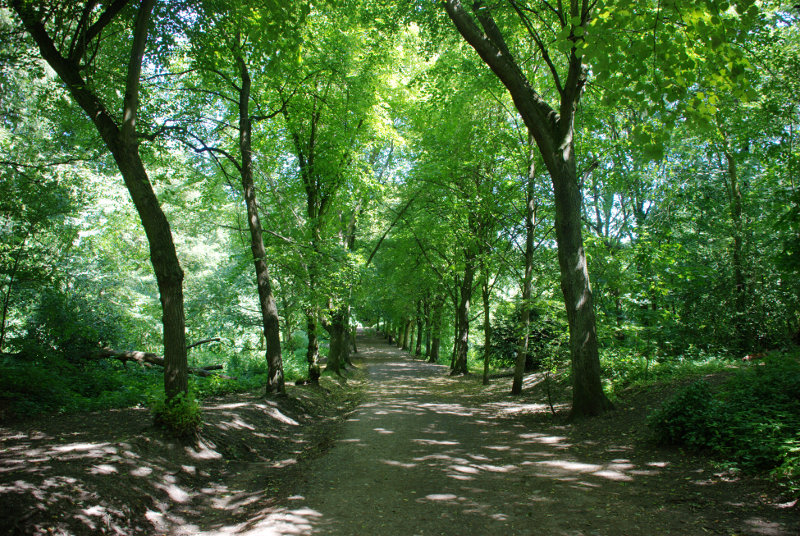 We were looking for an obvious junction which we found and where we turned left arriving, eventually, at Viaduct Pond. See, I told you we wouldn't get lost. 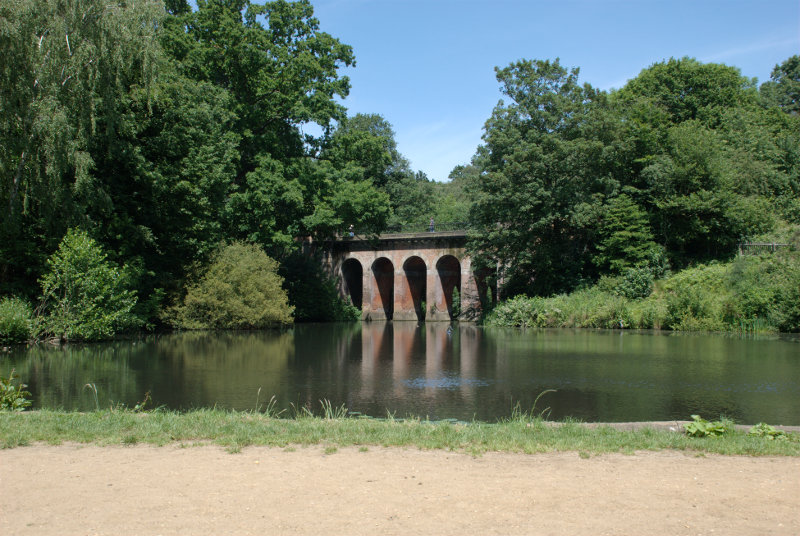 The viaduct carries another path across the pond. We made our way up the side of the pond onto that very path then took a smaller path through the woods ahead and finally emerged onto a larger path. We knew where we were now so turned left and headed for our next destination. Just to be safe we asked some people coming from the opposite direction who told us that we were indeed going the wqrong way. Whoops! Lost again. If you do go to Hampstead Heath no matter how many maps you take you will get lost. It is a nice place to get lost though.

They did gives us some directions which we managed to follow and finally arrived on the path we wanted. 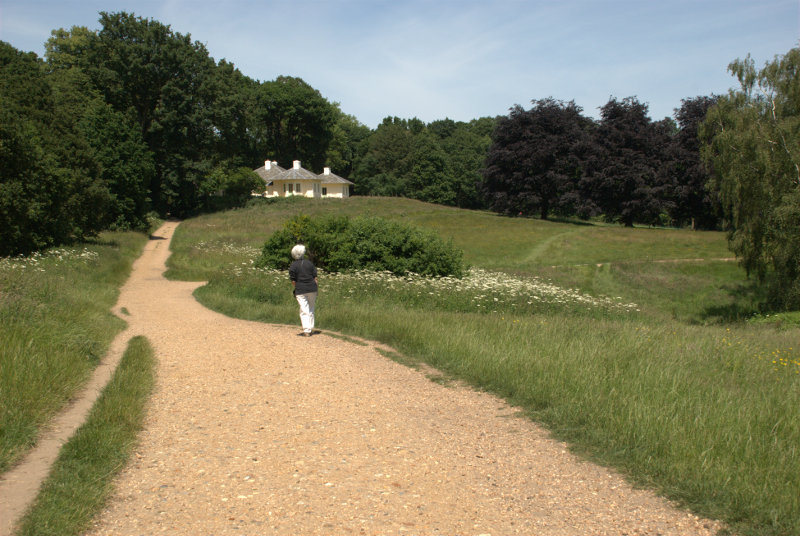 That's Amanda on the path and just ahead of her is a right turn which we need to take. This is what we were looking for. 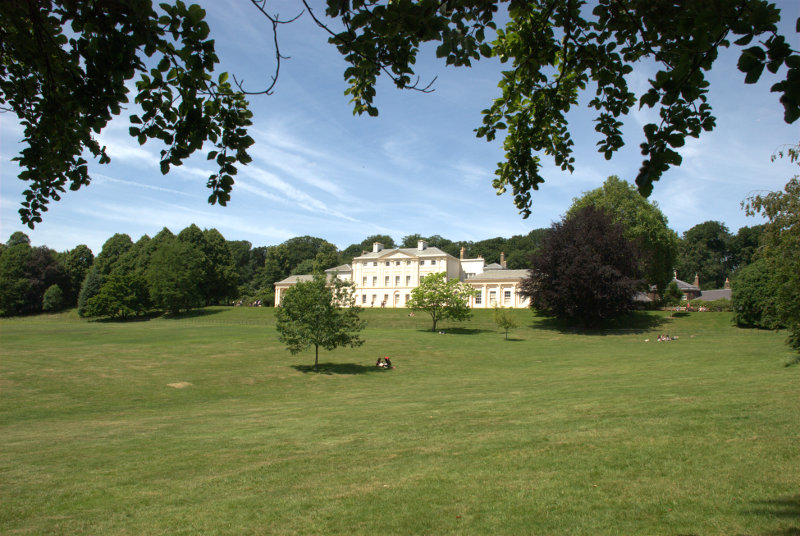 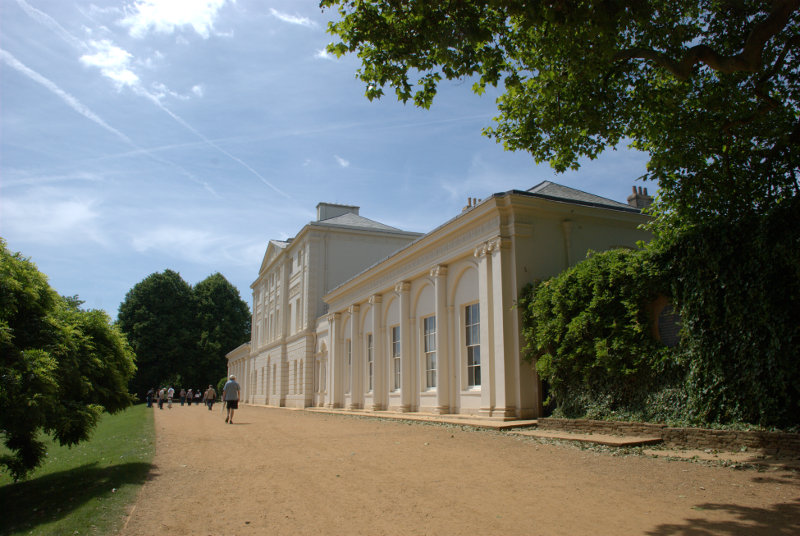 It is Kenwood House run by English Heritage and, best of all, entry is free. They have a place for refreshments called the Brewhouse Cafe which is where we now repaired to have lunch. The food turned out to be very good. I had poached salmon with roast new potatoes and cous cous and Amanda had free-range pork sausages with apricot chutney and roast new potatoes. Can't you just picture those little sausages gambolling around in a big field? Lovely! The main courses were just £9.50 each. Good value. 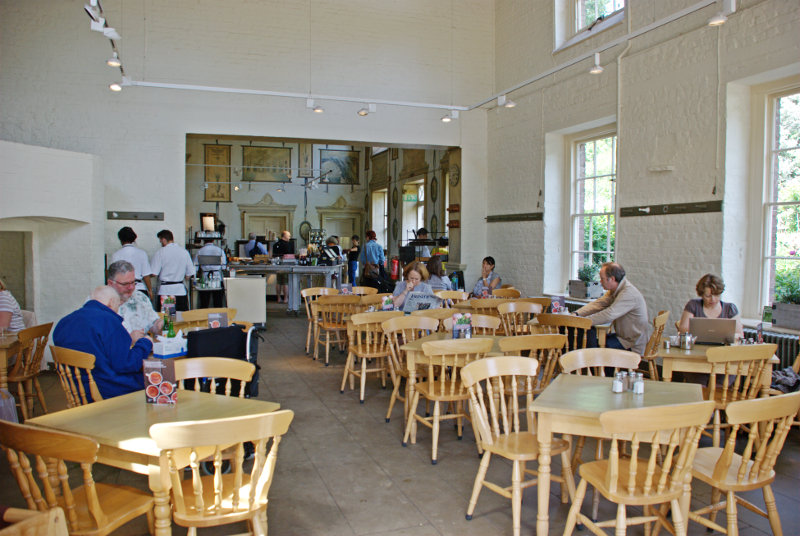 There is also a very nice outdoor area where you can choose to eat your meal or refreshments if you so choose.

After lunch we went into the house which, you may remember, is free.

The original house dates from the early 17th century and the orangery was added in about 1700. In 1754 it was bought by William Murray, 1st Earl of Mansfield who commissioned Robert Adam to remodel it from 1764-1779. Adam added the library (one of his most famous interiors) to balance the orangery, and added the Ionic portico at the entrance. In 1793-6 George Saunders added two wings on the north side, and the offices and kitchen buildings and brewery (now the restaurant) to the side.

The house does not contain much furniture but it does have an extraordinary collection of paintings including a self-portrait by Rembrandt and paintings by Vermeer, Gainsborough and Landseer to name but a few. 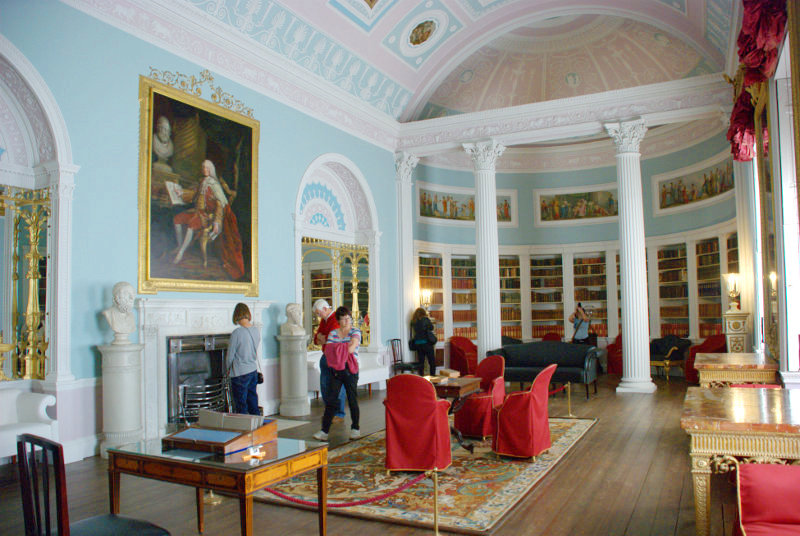 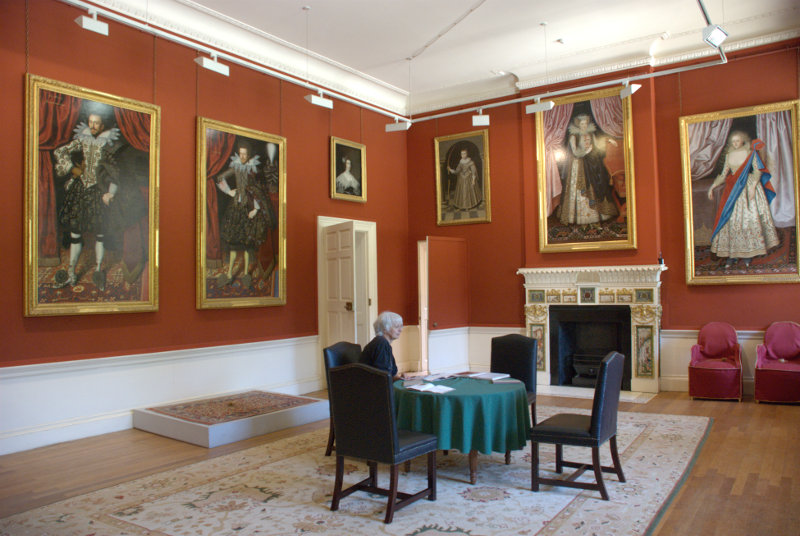 The first picture above is the Library, added by Robert Adam, and the second picture is the Upper Hall with Amanda sitting at the table waiting for dinner. I didn't have the heart to tell her it probably wouldn't arrive.

Out in the grounds is this rather grand bridge. 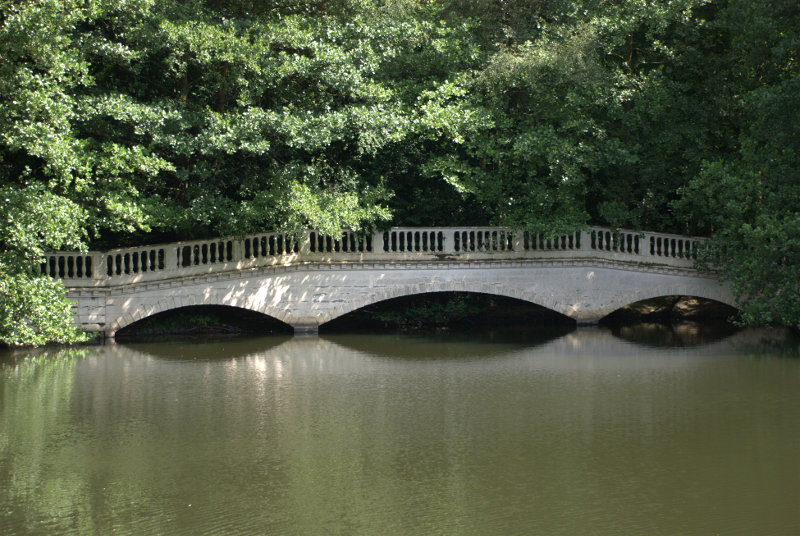 Except it isn't anything of the sort. It's a fake. Just a wooden facade painted to look like a real bridge. The back looks quite different. 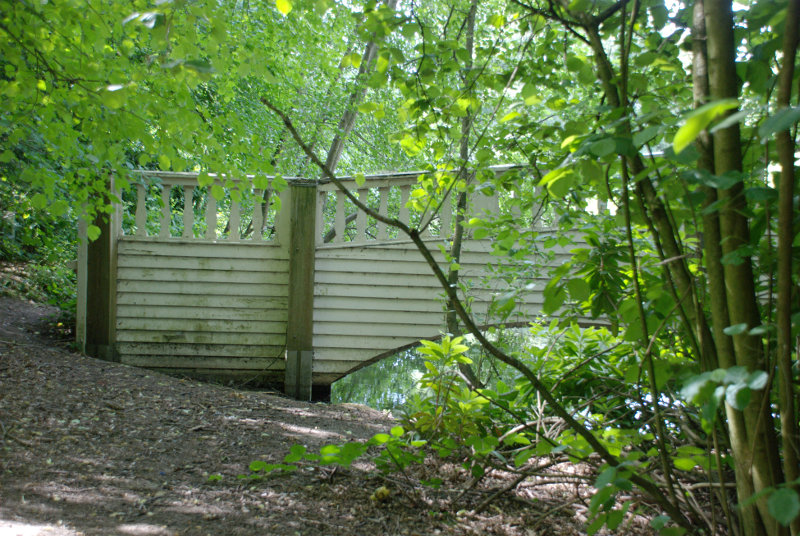 It was created around 200 years ago. Don't believe everything you see.

That was our Hampstead trip for the day but we had a little more time so we went, via the tube, to Lancaster Gate and into Hyde Park/Kensington Gardens. Just inside the gate is the Italian Gardens.

I was looking forward to photgraphing the fountains – but – no fountains. Sorry fountains are closed on Monday and Tuesday. I don't actually know if that is true but they definitely weren't running. Not one little drop. I don't know why but it was disappointing. 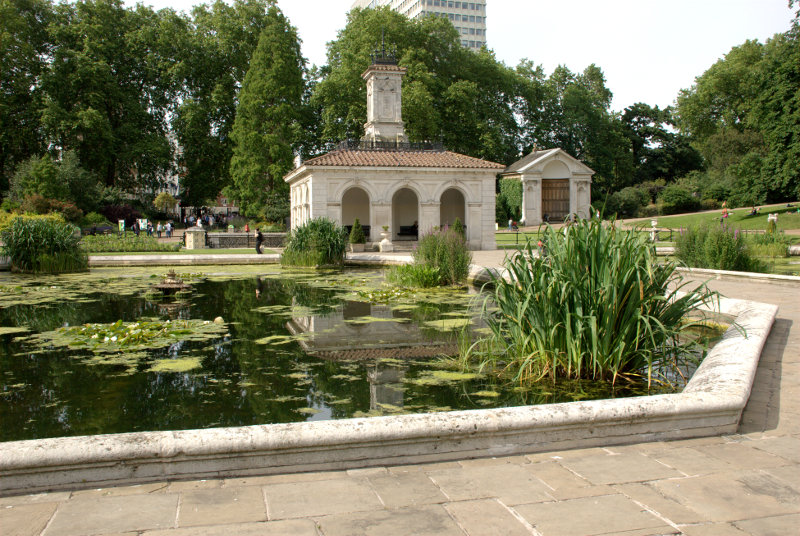 However there was something unusual. 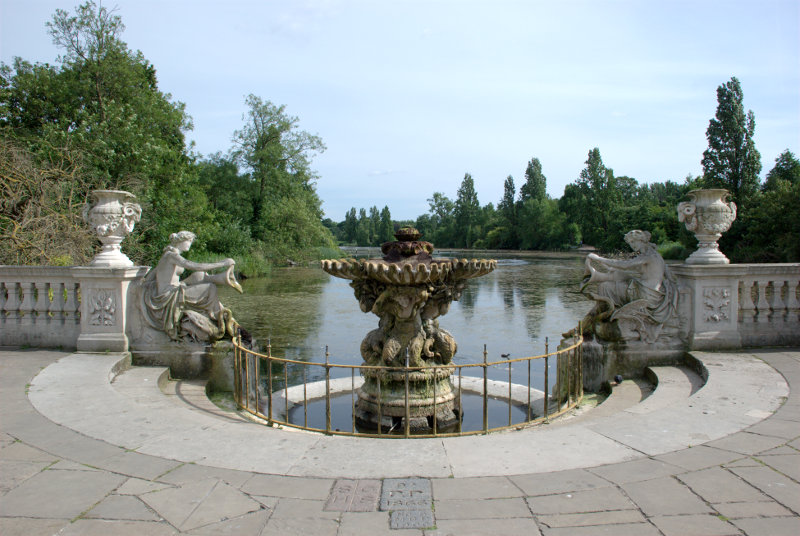 No not the non-fountain but what's behind it. Oh! You can't see it? I'll move round a bit then. 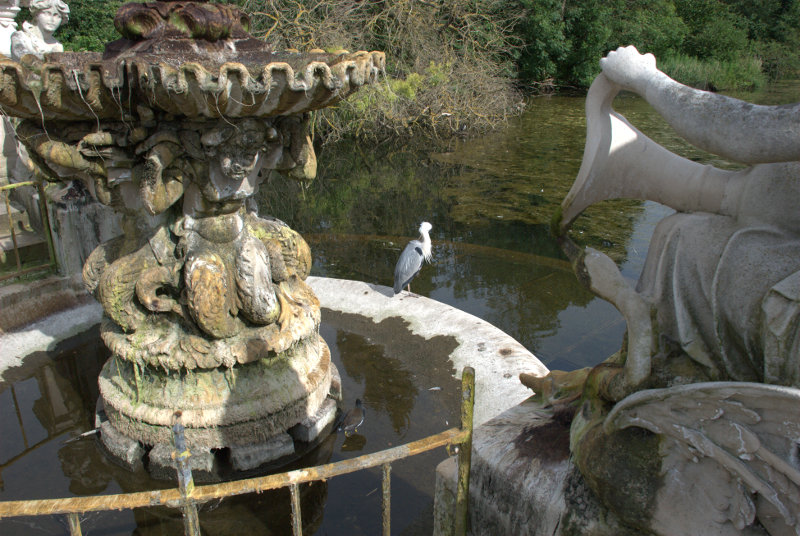 Can you see the Heron perched on the edge of the bowl now? This one is obviously hoping for a fish dinner and, because it's so used to all the visitors, it hasn't taken fright as it would do normally and flown away. 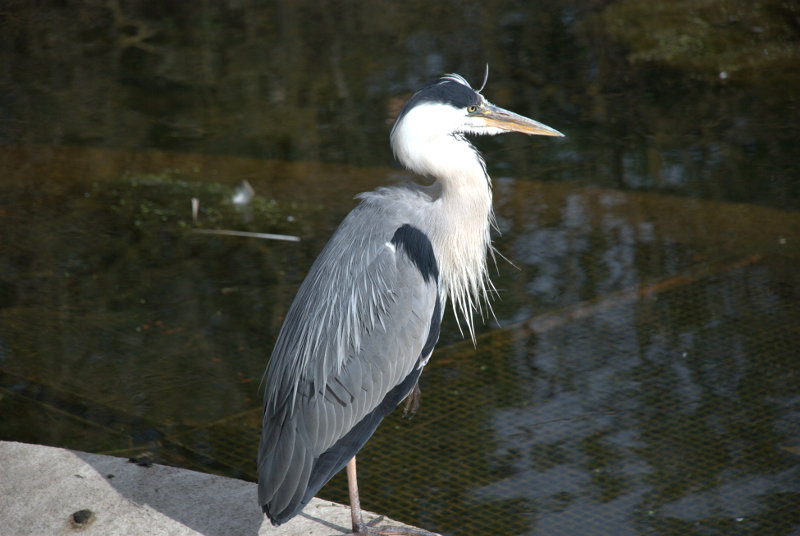 We caught the Central Line to Liverpool Street Station for our train home except that there wasn't one. No trains running on the main line to Norwich. There were hundreds of people standing around on the main concourse all looking at the departures board. I've never seen so many 'Cancelled' and 'Delayed' indicators. Who do they think they are – an airport?

We had planned to get a train somewhere between 6:00 and 6:30. So much for planning.

We eventually learned that a train had damaged the overhead power lines which supply electricity to the trains motors and that this was just north of Chelmsford (one of the places our train goes through). This left just one track operating for trains going both ways so all trains were having to take turns to share this section.

Then just before 7:30 there was an announcement that a train was leaving for our neck of the woods but that induced a torrent of people and by the time we got to the train we would have needed a shoe horn to get in. We didn't bother.

Then, shortly after, another announcement said that a train going to Harwich International (north of our station) which wasn't going to stop at our station was having two additional stops which did include our station. We got to the train to find that there was room but only if we were prepared to stand. We had no idea how long we'd have to wait if we didn't get this one so we decided to take a chance.

It did actually leave on time, about 7:40, and we crawled for 30 minutes to the next stop. When we started again we picked up speed and we going quite well for some time until we stopped and waited – and waited – and waited. We must have waited there for about an hour then started a stop-start journey through various stations until we finally arrived at ours. After we'd been standing for 1 and a half hours two younger people offered us their seats and we collapsed into them before they changed their minds.

That journey took a total of 2 hours 45 minutes instead of the normal 55 minutes.

We were very glad to arrive home especially as it was 10:30. What an end to an otherwise nice day!

3 thoughts on “More of the same but more of the difference.”