We wake up early on the first morning in our hotel. A bit too early as it turns out. It is 5:00 AM and we have been woken by the extractor in our bathroom starting up very noisily. It seems to have a mind of its own as there doesn't seem to be any logic to its operation. I later mentioned it to reception who later told us that it had been checked and there was a fault so they've temporarily disconnected it. We went back to sleep and eventually woke again at 7:00 AM.

Drawing the curtains tells me we have wall to wall sunshine. Super! We have a pleasant relaxed breakfast. Very friendly and cheerful staff and lovely food. Can't complain at all.

After breakfast we set off for the bus station which is a 10-15 minute walk away and we catch a bus towards Mumbles. We aren't going as far as Mumbles and we alight after about 12 minutes at Black Pill near the Woodman pub. Anyone that knows this area will realise where we're going but before we got there we sidestepped onto the shoreline for a quick photograph of Swansea across the bay. 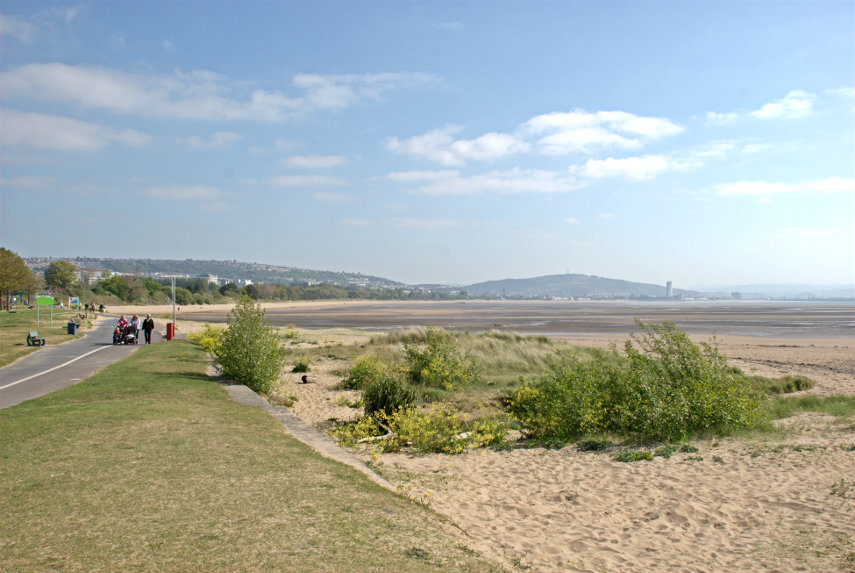 You should be able to see a tower on the right of the picture. That is near the Marina where I previously photographed this same beach. Quite a beach!

We went back across the Oystermouth Road and down the lane beside the Woodman pub and we arrive here: 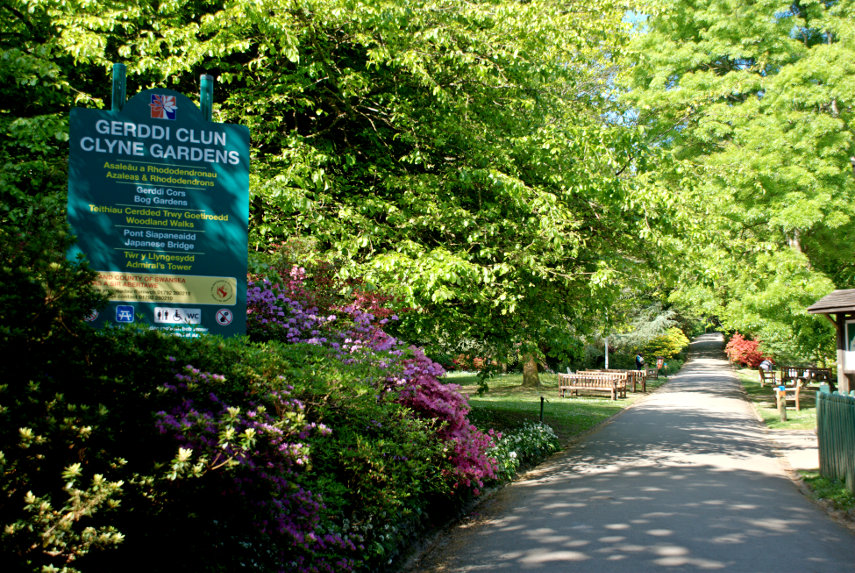 Clyne Gardens are known for their Rhododendrons and Azaleas and I make no apologies for the number of 'flowery' pictures. Consider yourselves lucky that I haven't included all the phogographs I took. This is one of those places where one wants to take another photograph after every step. We planned to make this trip at this time (8th-11th May) because of the Rhododendrons and Azaleas displays. The intensity and variety of colour is astonishing and more so when you consider that entry is FREE. You cannot get better value for money.

I have reproduced a plan of the gardens below which is a photograph of the board displayed at every entrance and you can just read the text in the larger version. You should notice that the gardens are roughly divided into two; the lower part with all the paths that seem to wind all over the place along the route of a small stream, giving a sense of seclusion, and the upper part which is on higher ground and is more open. Both areas are utterly delightful. 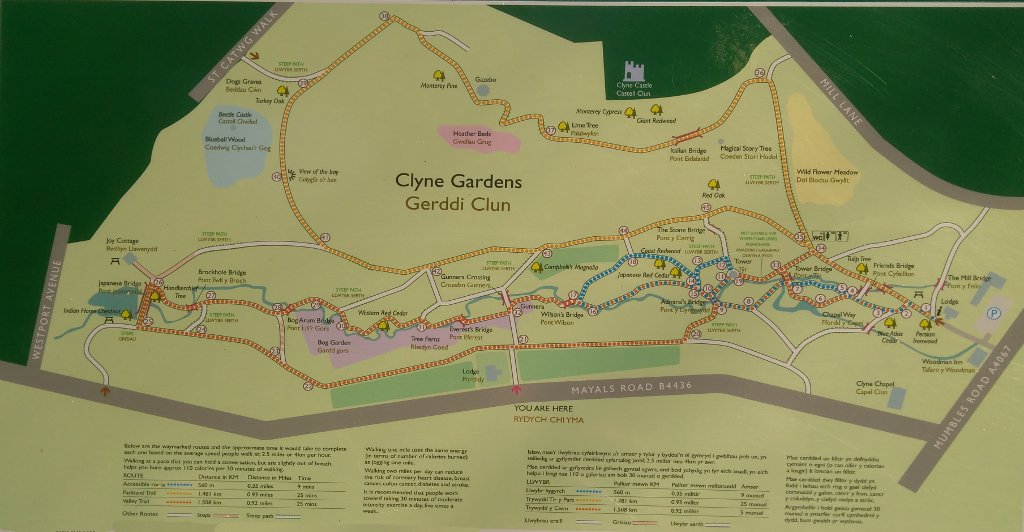 We entered the gardens at the extreme right. We made a mental note that just inside the gate there is a refreshment tent and just a short distance on are toilets. A good combination for us oldies.

We were then faced with this view. Doesn't that path seem inviting? Don't you feel that you want to see what treasures it holds? We had decided to follow the little stream to the large pond at the end then come back along the path which borders the stream valley so we took the first left. We were immediately assailed with bright colours at every turn. 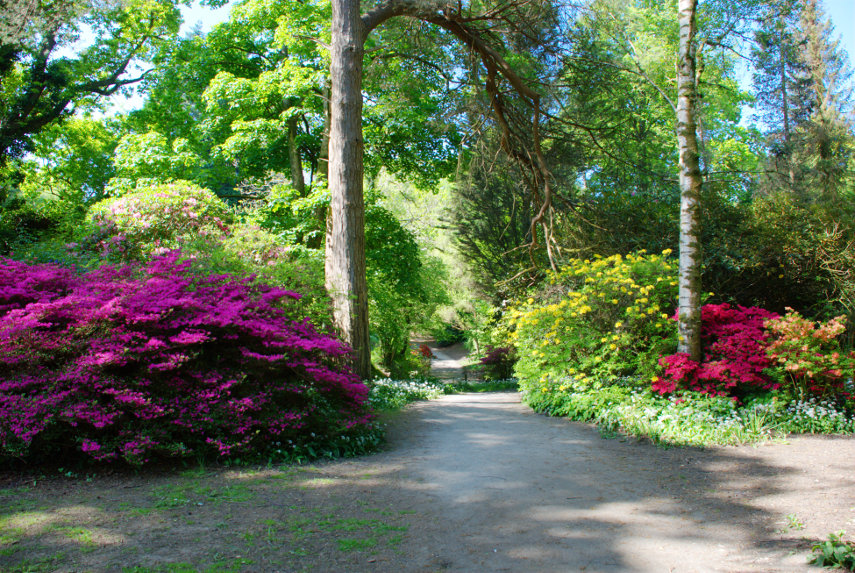 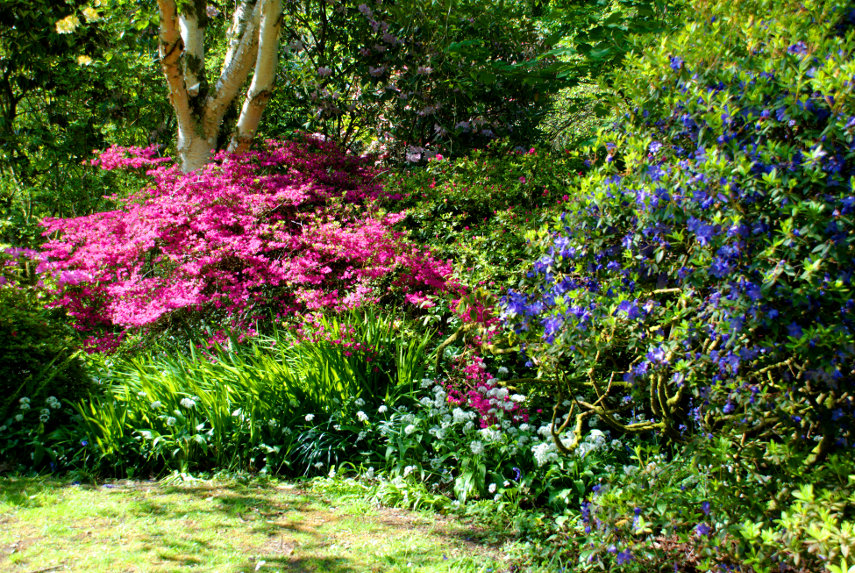 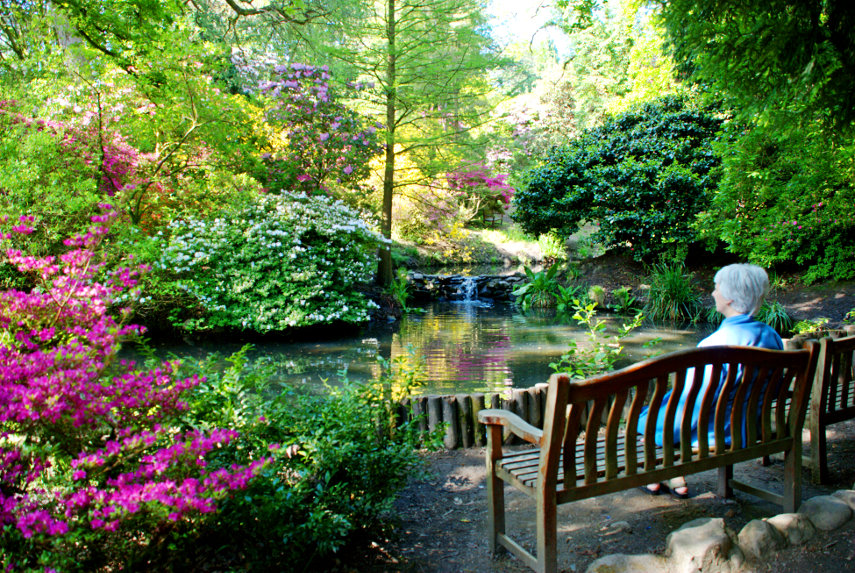 It took us quite a while to cover any distance as there is so much to look at but we did, eventually, arrive at the Japanese Bridge. The little waterfall feeds the stream running through the gardens. 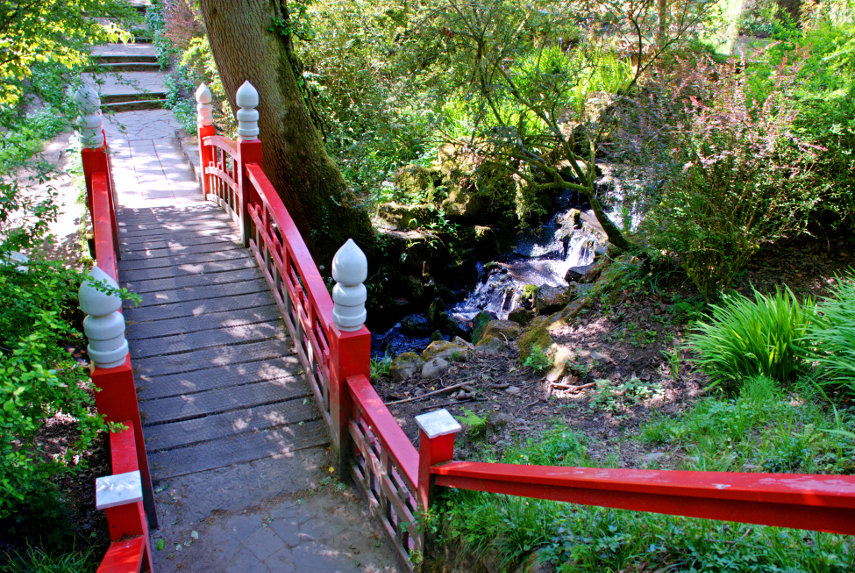 This is the pond at the end of the garden that feeds the waterfall above. 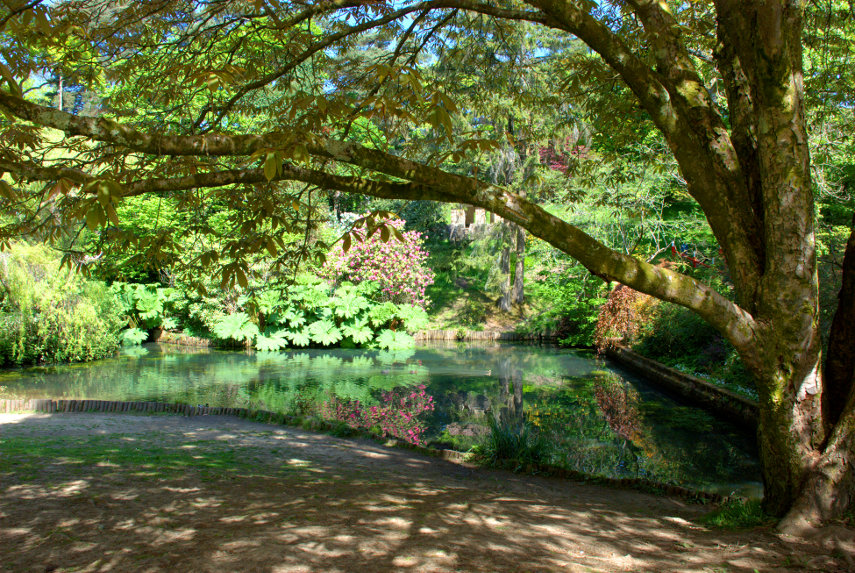 This garden does have many plants that are not especially colourful but which, nenertheless, are interesting. 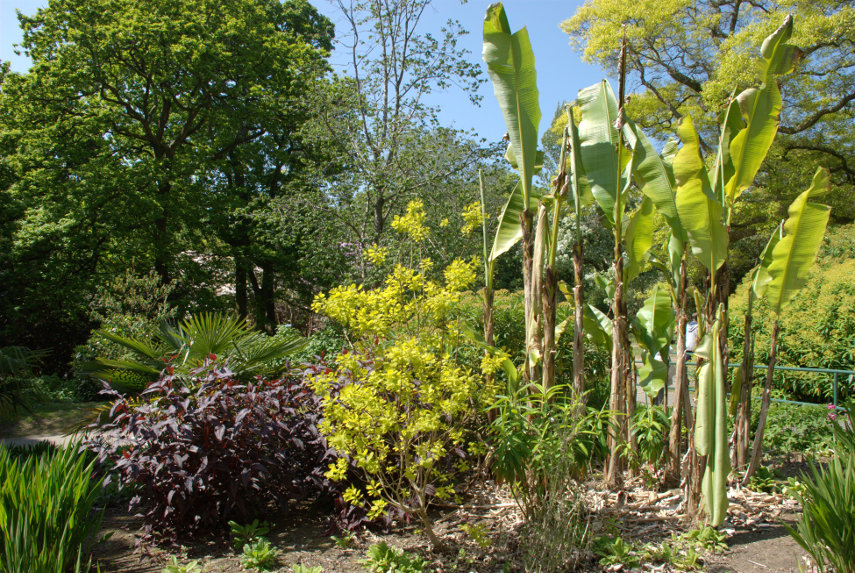 We made our way back toward the entrance although we weren't ready to leave, toilets don't ya know., then went back along the path which follows the top edge of the gardens. There were, of course, yet more colourful displays and some very impressive specimen trees. This garden has something for everyone. No, it has everything for everyone. This next picture is from the top part of the garden and you can see that it is higher than the secluded parts with a view across Swansea Bay and showing Swansea on the left. 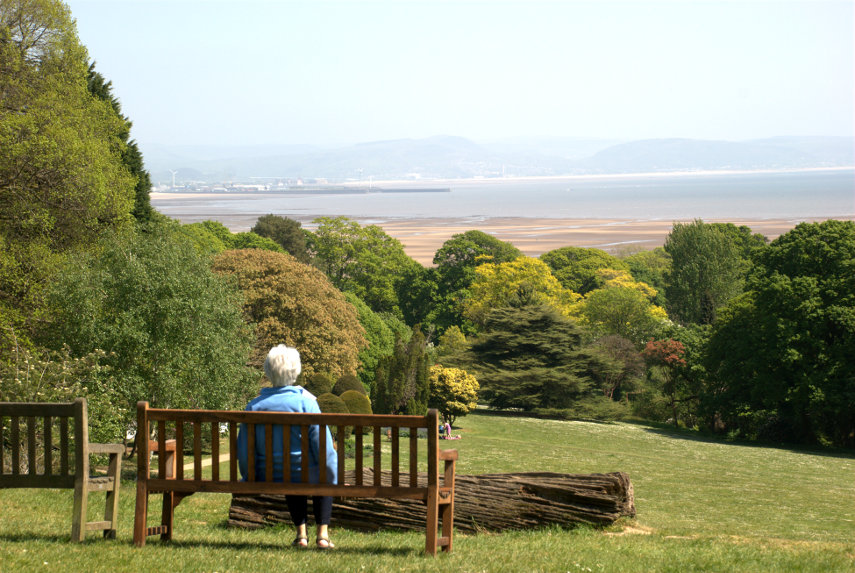 We went back towards the entrance and had some hot drinks, some items left over from yesterday's lunch together with some purchased cake as a light lunch whilst sitting outside in the sun. When we were finished we strolled off towards the bus stop where we hoped to catch a bus for a short ride back towards Swansea to Singleton Park. I had an application on my smartphone which gives details of bus routes, bus stops and times which we found to be very handy and this gave us a bus at around 2:30 PM. We had a choice of getting off at one of two places. The first involved a walk which I estimate would have taken us 10-15 minutes and the second would drop us off at a stop which was significantly nearer. We chose the second. Big mistake! What I hadn't realised is that the bus goes all round the streets in the suburbs and turns a 10 minute ride into 40 minutes. Oh well, one learns by one's mistakes but we got there in the end.

This time we were visiting Singleton Park although not all of it but just the Singleton Botanic Gardens. We walked through a small part of the park to get to the botanical gardens and saw this stone circle on the way. This is not a genuine stone circle but one that was built in 1925. Known as the Gorsedd Stone Circle it was erected for the National Eisteddfod of Wales' Proclamation Ceremony. 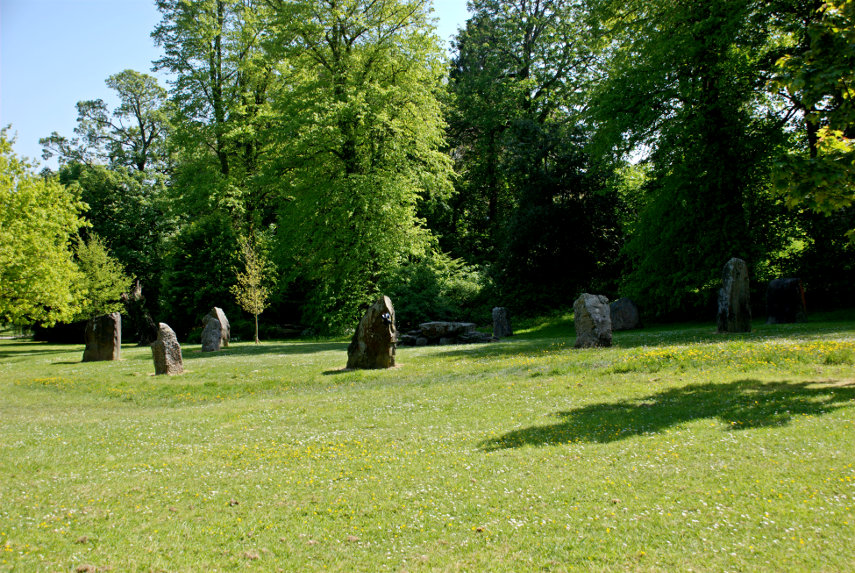 The botanical gardens are described by the local authority as 'one of Wales' premier plant collections, with spectacular herbaceous borders and large glasshouses' and we wouldn't argue with that. Once again entry was FREE. I do like Swansea. 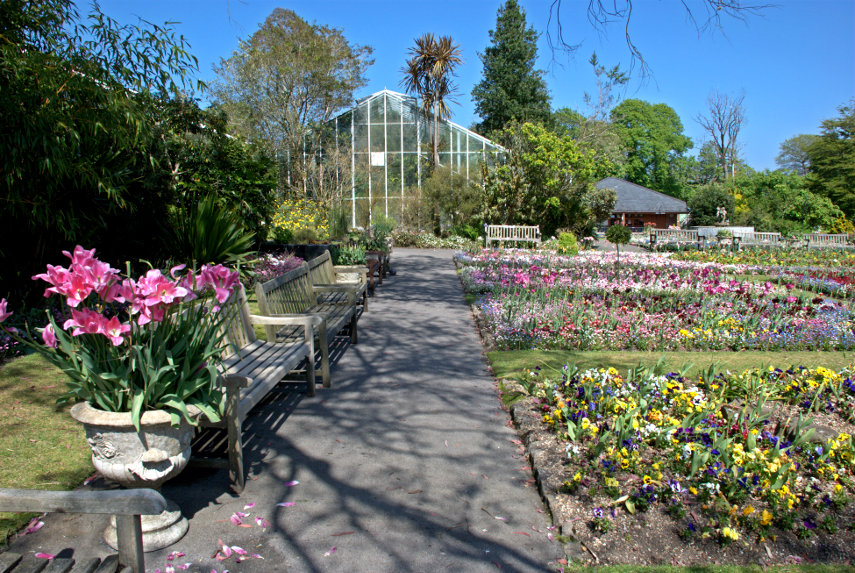 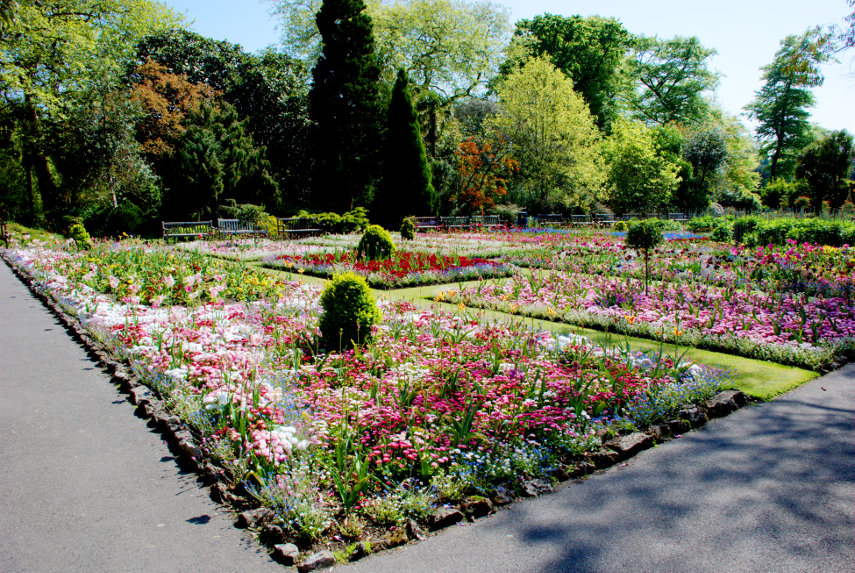 The greenhouses are large enough to have pathways and they didn't seem overly hot. 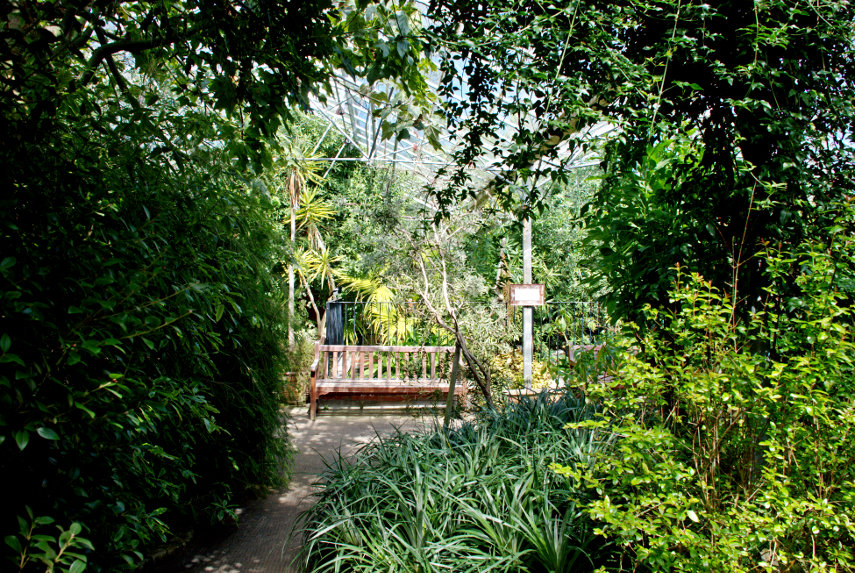 There was an arid greenhouse which featured numerous cacti, succulents and the like. 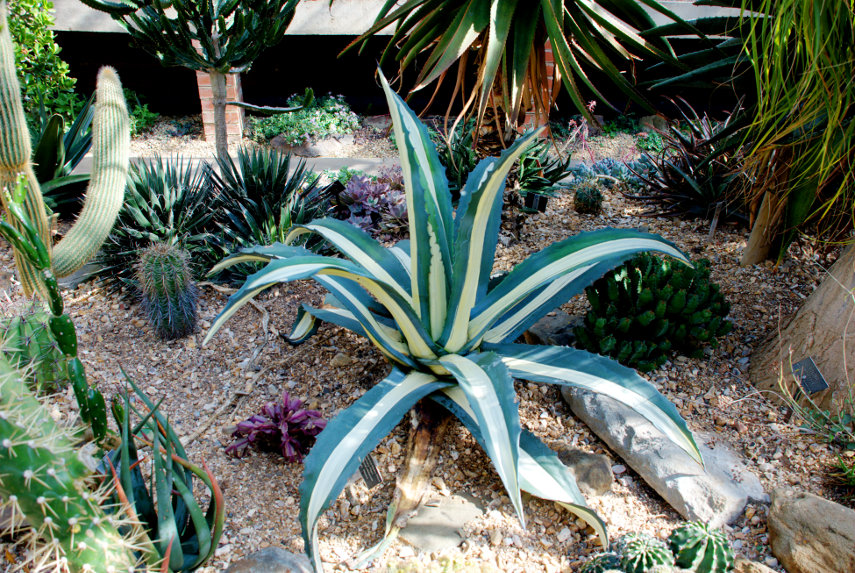 The local authority also says 'Although the gardens are at their most stunning during August, when a full programme of events and tours are staged, there is something to see throughout the year. The herbaceous borders are a fantastic sight from late March until mid October'.

They can say that again! 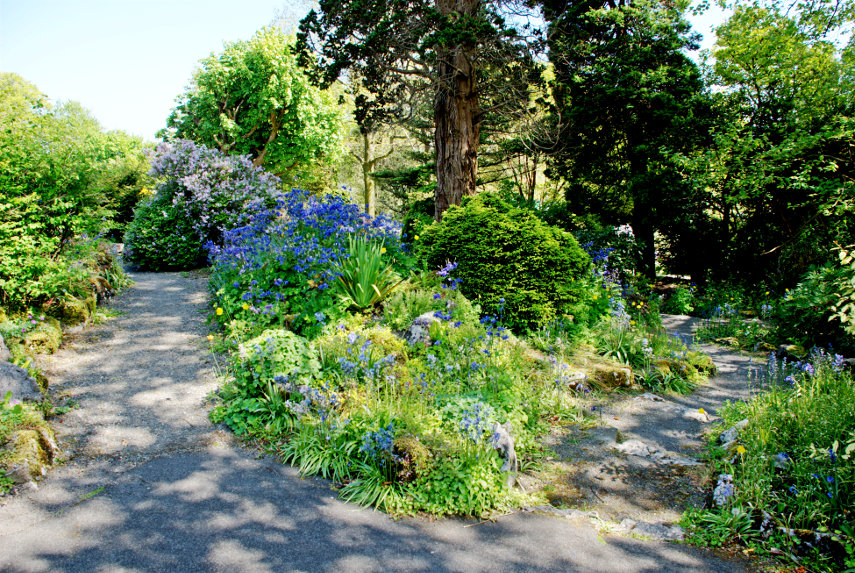 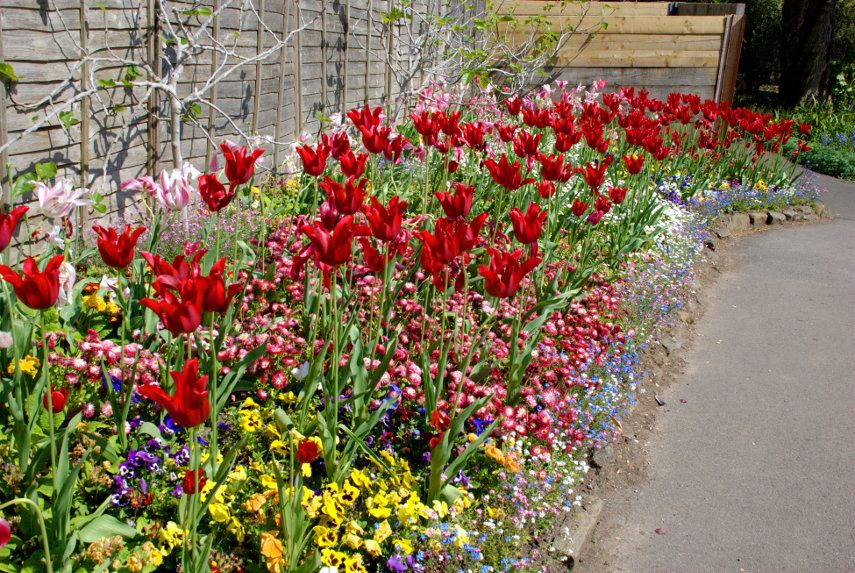 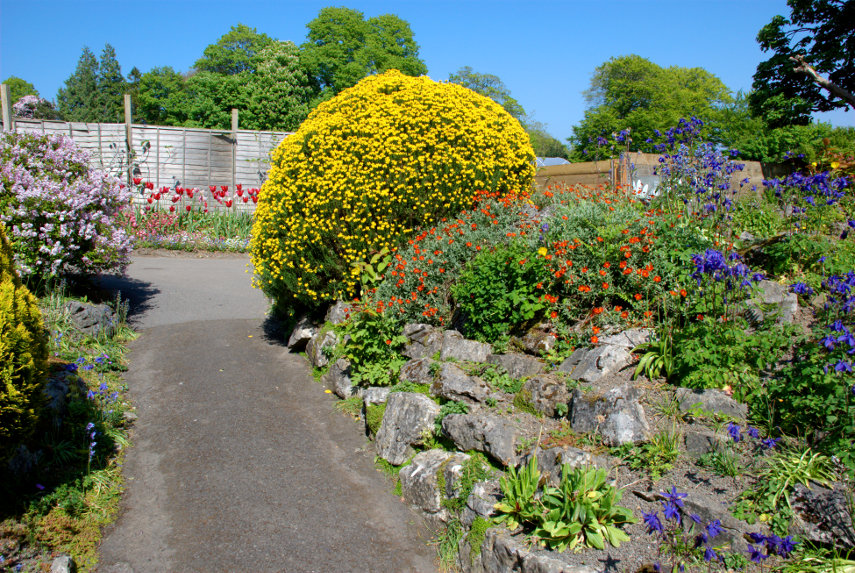 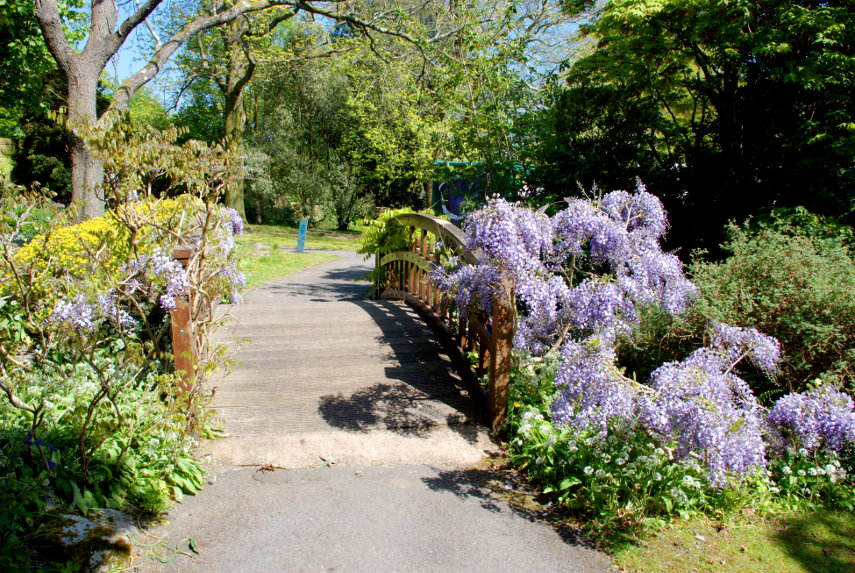 We wandered out of the Botanical Gardens into the surrounding Singleton Park which was originally part of a large family estate. We saw this Swiss style chalet built in 1826 as part of that estate and was designed and built locally. There are plans to use it as a cafe although there were no signs of life when we were there. It is, apparently, a listed building and Swansea Council is now working on the legal details of a plan to lease the Alpine-style building to Swansea University.

As well as refurbishing the inside of the cottage to provide a tea room and a café, the university is also looking into the possible introduction of a visitor centre and cycle hire facilities there in future. Watch this space. 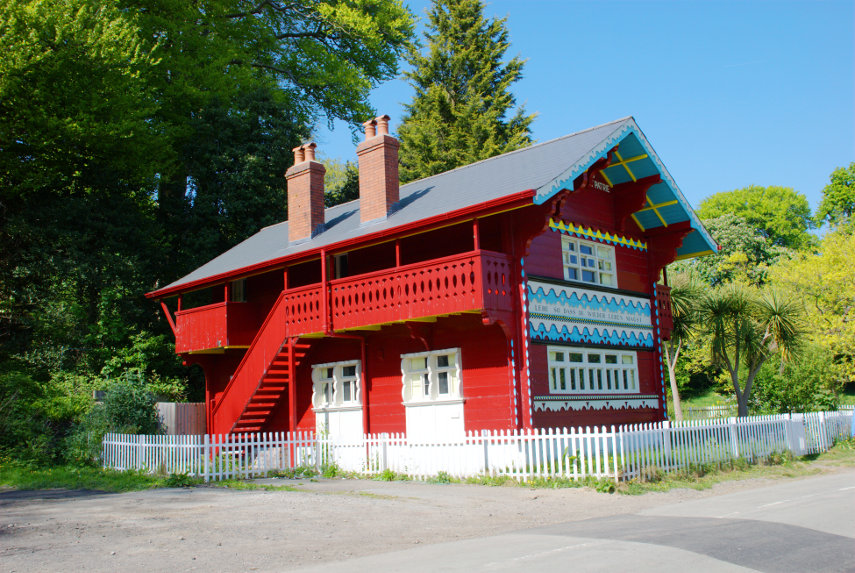 Whilst in the main park we saw something unusual. The next photograph won't win any awards but it is the only time I have managed to photograph a Kingfisher. There is no mistaking that brilliant blue and we saw it fly a number of times. They aren't rare but they are very shy and you will be very lucky to see one. We were on the other side of the lake and I was using maximum telephoto. Must be a good omen. 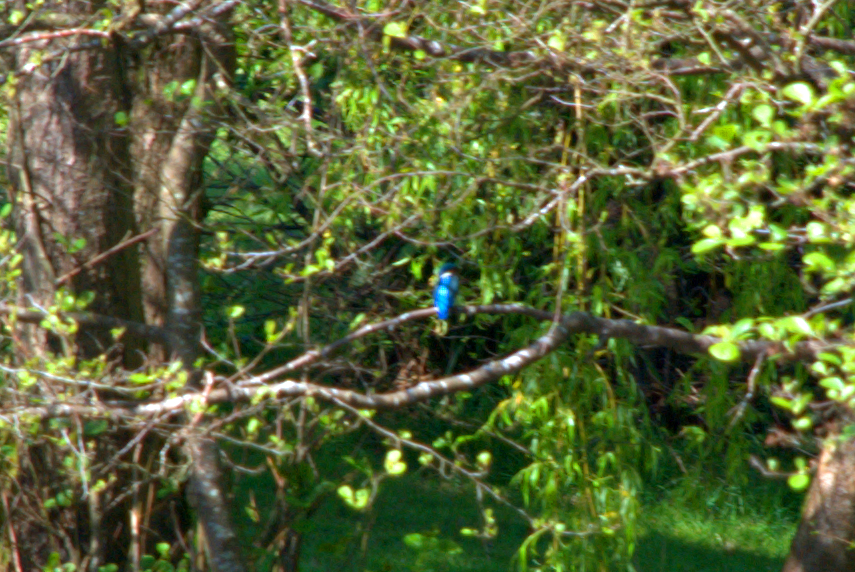 If you are a keen walker you could walk along the sea front from near the Marina to Clyne Gardens, a distance of about 3 miles, and then walk from Clyne Gardens to Singleton Gardens which is probably no more than a mile.

We are looking forward to tomorrow.