Today we are going back to the bus station and catching the same bus again but we are going a little farther this time; a 20 minute journey. We alight at the first bus stop after the bus turns away from the coast road in Oystermouth which is part of Mumbles. Both names are said to be corruptions of welsh names. We walk, for just a few minutes, back to the coast. Looking straight across Swansea Bay we can see Swansea on the other side. 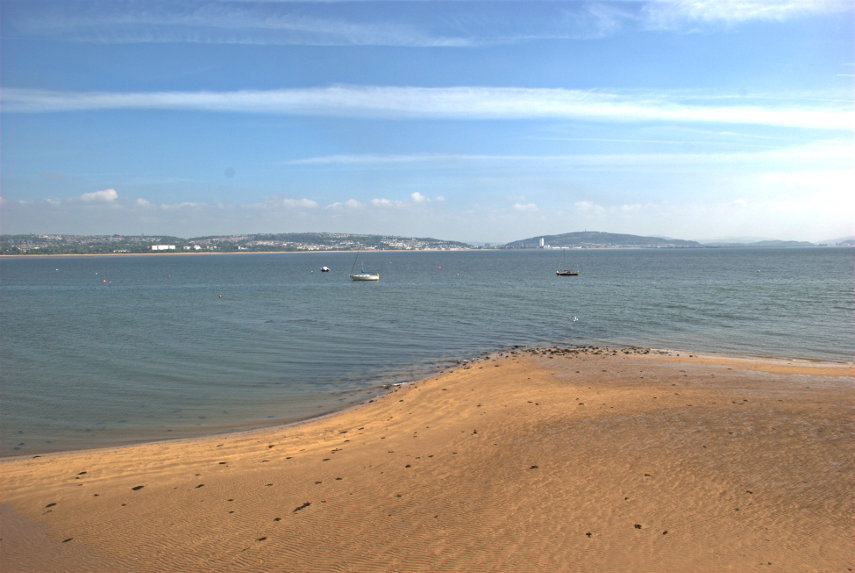 Looking to our left we can see buildings in Oystermouth. That rather prominent stone building on the hill is Oystermouth Castle. 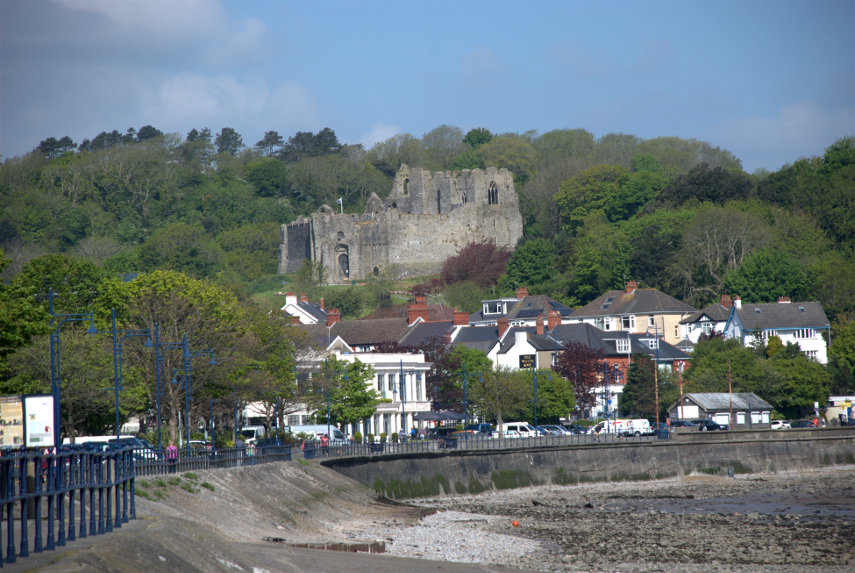 Looking to our right we can see Mumbles Pier which is where we're headed. Mumbles seems to be quite a busy little place with plenty of shops and cafes and we have a slow, pleasant walk along the pedestrian/cycle path which follows the shoreline. It isn't very long before we arrive at Mumbles Pier. 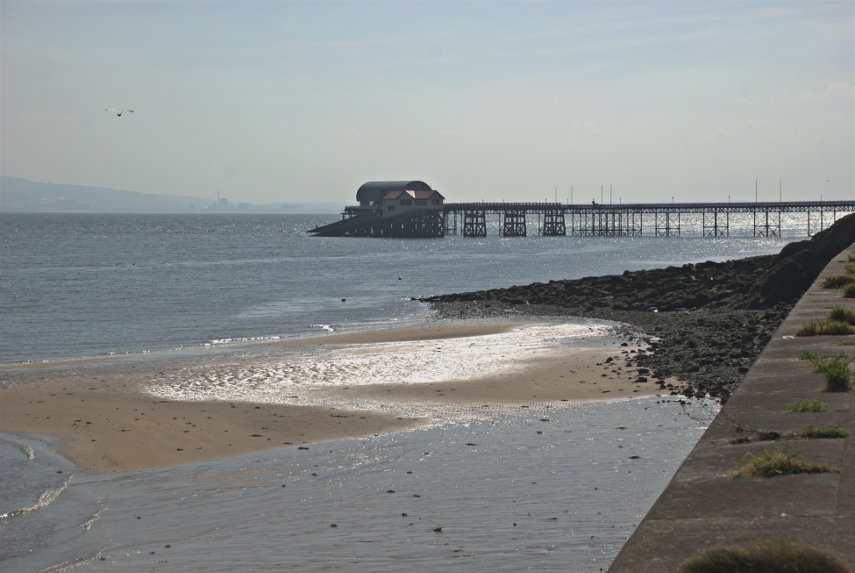 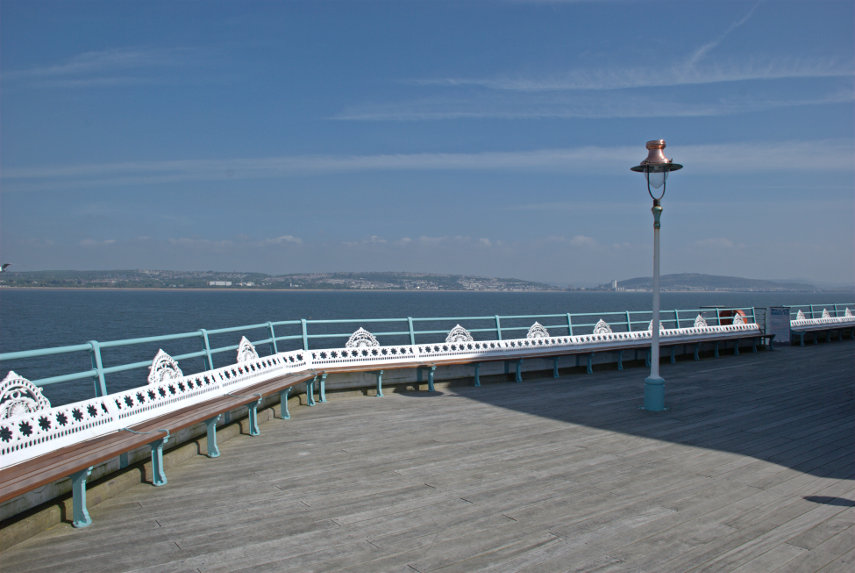 The pier buildings on the shore are also Victorian and the left-hand end is a cafe where we had our morning coffee. It is a nice little cafe which also serves food but we didn't try that. The cafe seems to have preserved many of the original Victorian features including the chandeliers and fans. 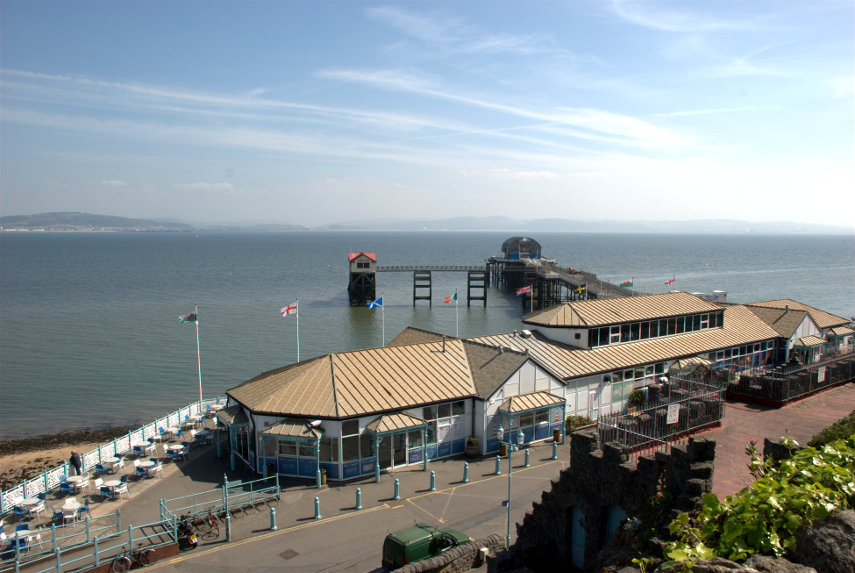 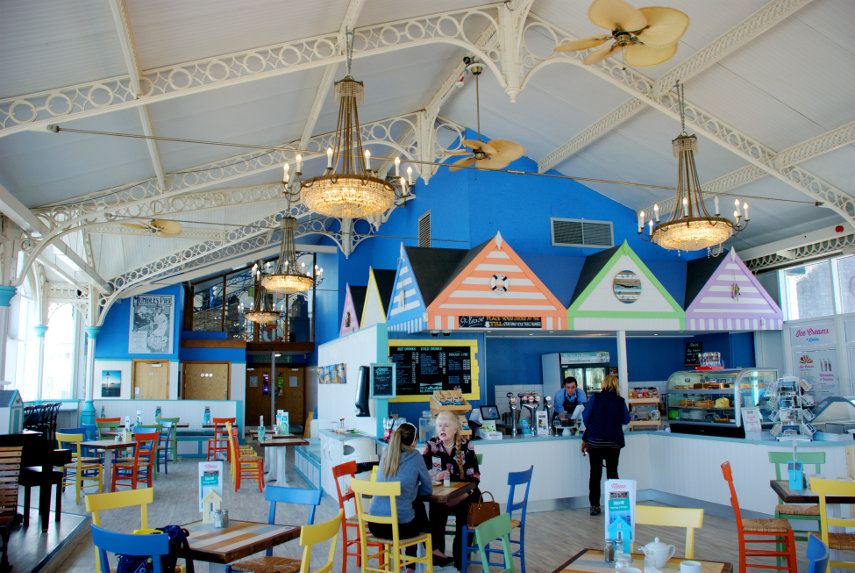 After our brief rest we climbed the obvious steps to the top of the cliff and walked south-west past Middle Head and Mumbles Head and then looked back to this view. Mumbles Head is the one with the lighthouse on it and Middle Head is the one behind it.The lighthouse was completed in 1794 and initially two open coal fire lights were displayed which were difficult to maintain and were soon replaced by a single oil-powered light within a cast-iron lantern. The lighthouse is now unmaned. 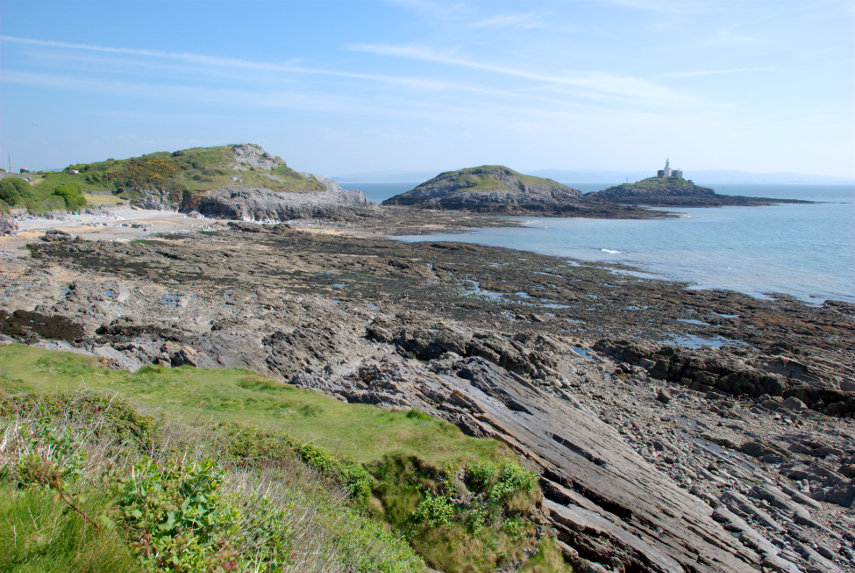 We walked as far as Limeslade Bay and went down onto the beach where we rumaged around looking at the rocks. The rocks on the Mumbles promontory are steeply inclined and from the Carboniferous period being limestone at the seaward end and coal measures at the landward end. We found this among some of the bedrock and I don't profess to know what process would have caused it but it is very striking. 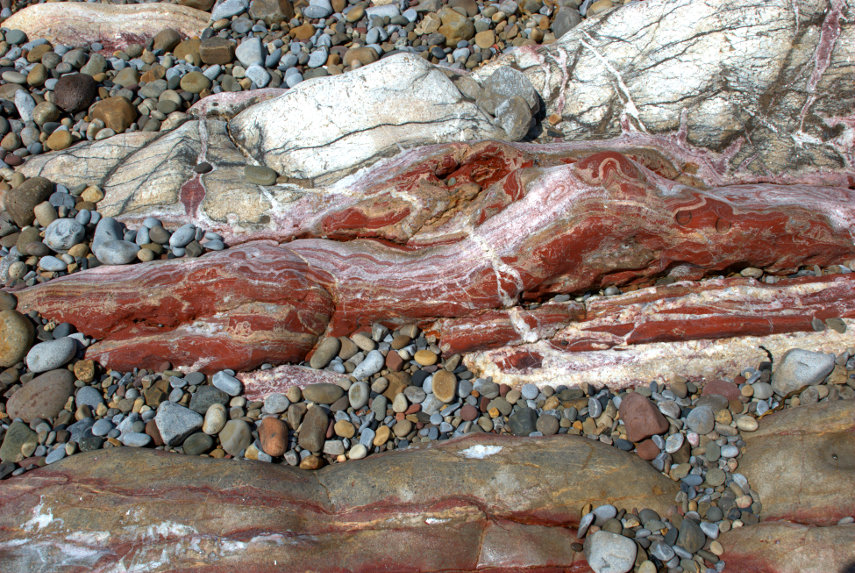 It was at this point that we made another mistake. Looking at the map it was obvious that if we went back the way that we came we would be travelling in a semi-circle whereas cutting through the side streets would be a straight line. Well it would have been if the ground had been flat so we ended up travelling in a semi-circle, but vertically, as we went up and over the hill. I should have looked more closely at the contours shouldn't I? The road down turned out to be interesting as it was obviously an old road, very narrow in places and winding all over the place. 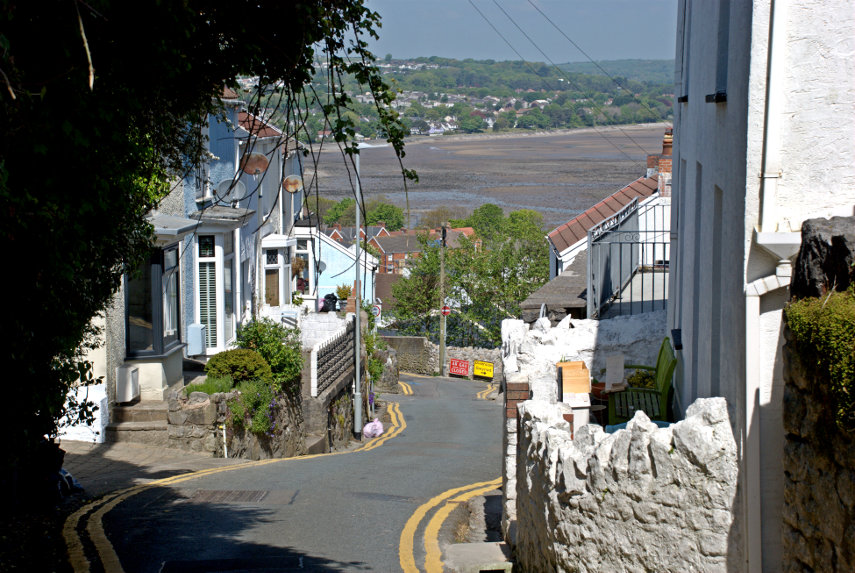 We got there in the end and ended up at Oystermouth Castle. The castle is Norman, probably built around 1220, and is the responsibility of the local authority but is run by a volunteer group called 'The Friends of Oystermouth Castle'. The entry charge is £3.50 for adults and £2.50 for us oldies. I have to say it is certainly worth it. 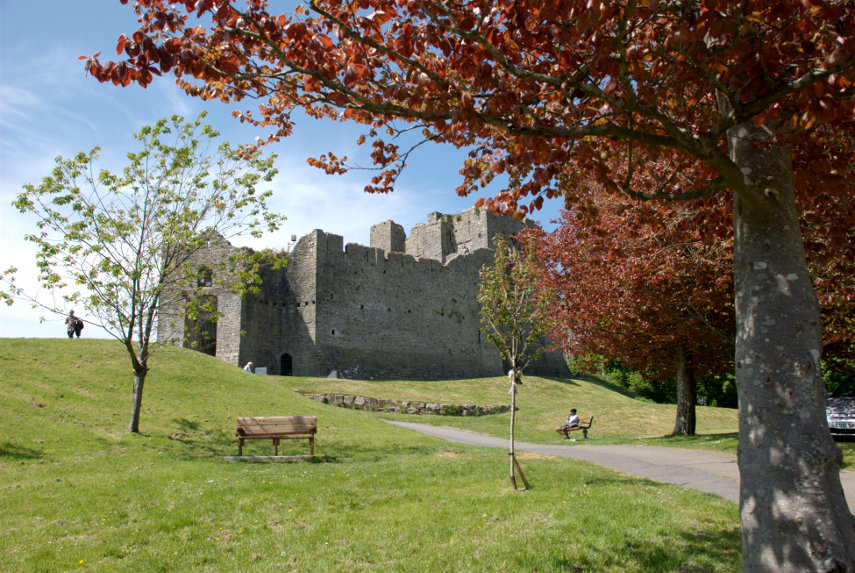 One of the unusual features is a glass bridge about 30 feet up and, yes, we did walk over it and back again. The fun part is going up and down the spiral stairway and there are a number of those in this castle. 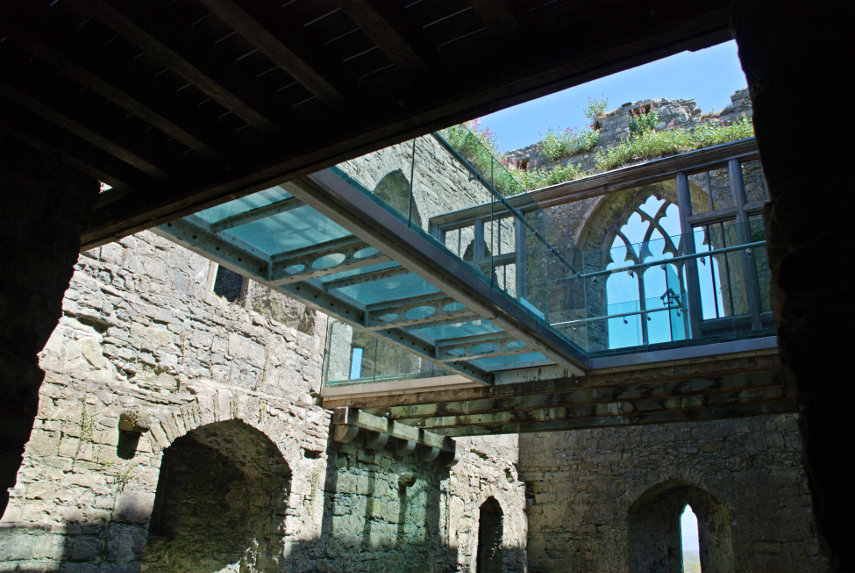 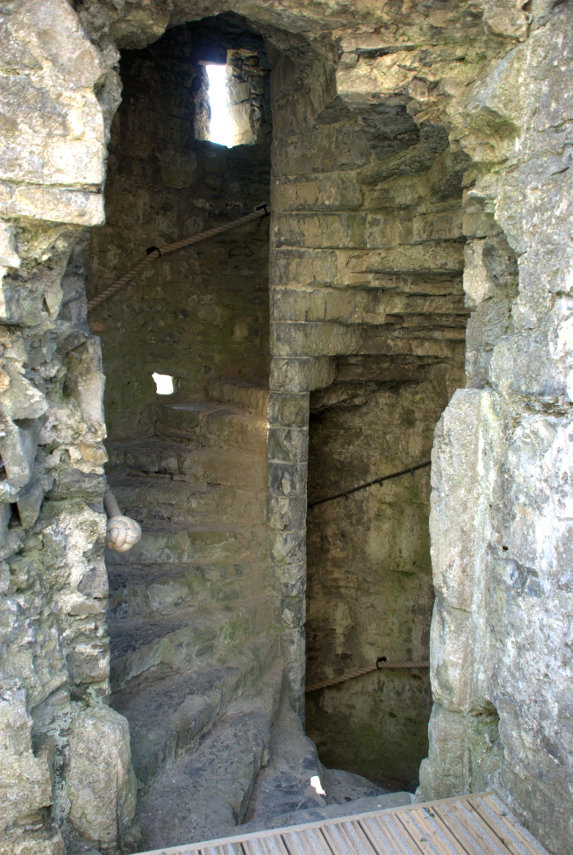 There are lots of features in this castle including wall walks, intricate passages running hither and thither and various halls and rooms. One could become quite disorientated with little effort but that's part of what makes it interesting. 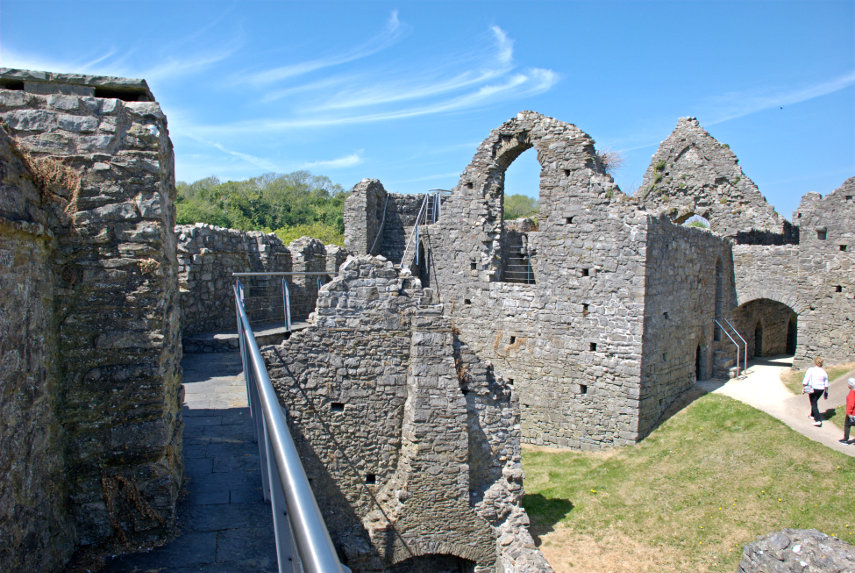 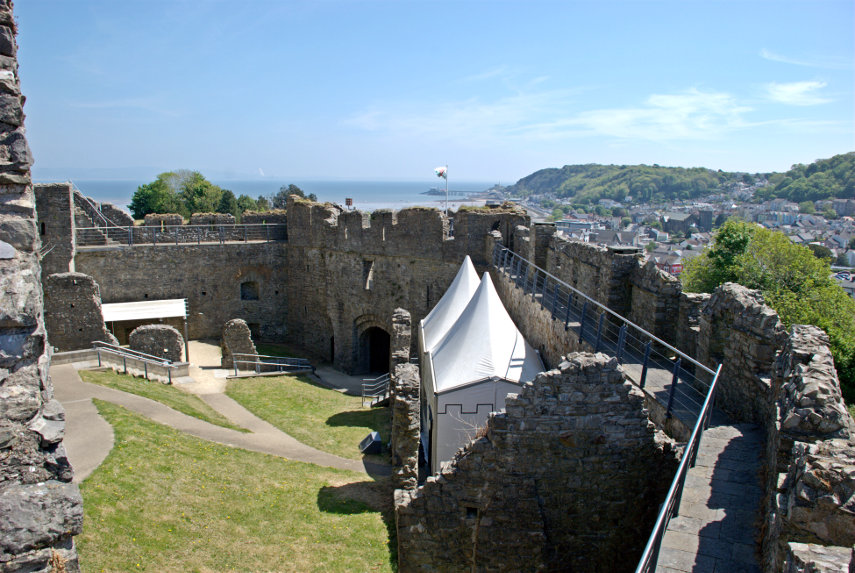 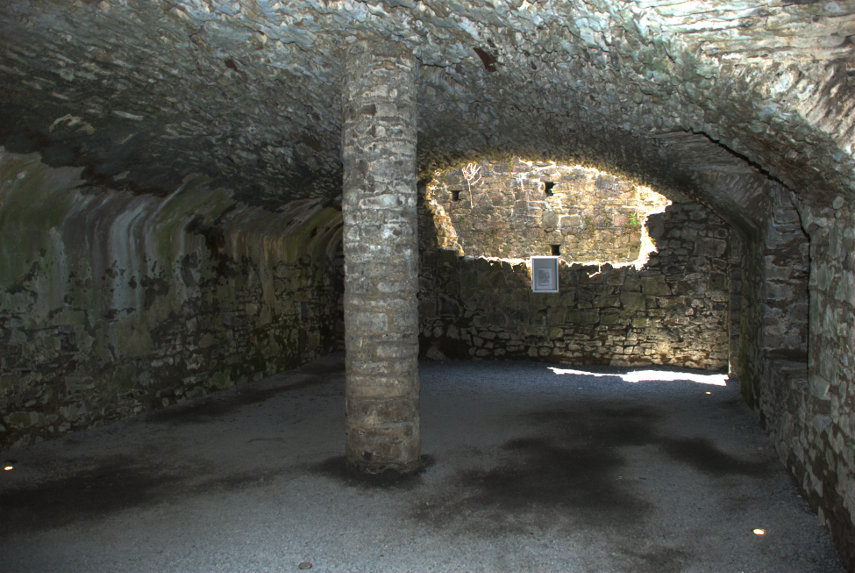 There are also good views from the upper parts. 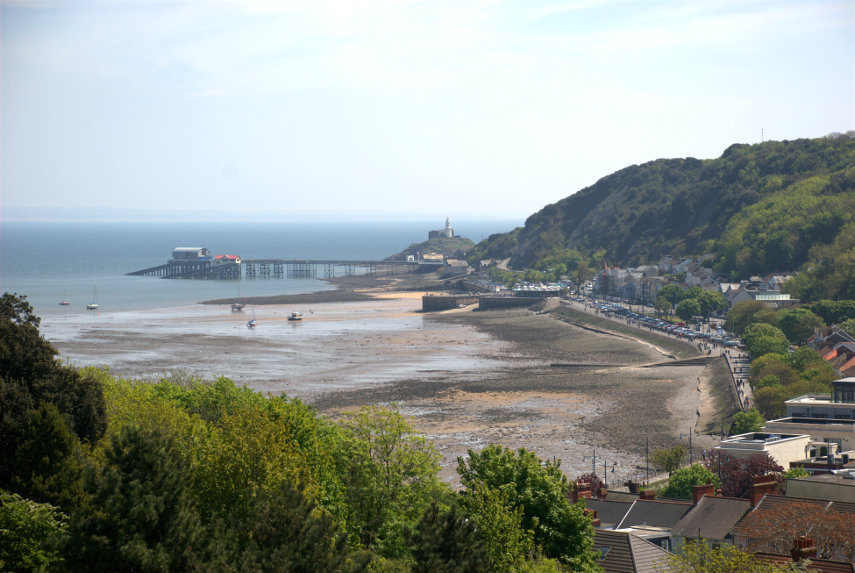 We left the castle early afternoon to get the bus back to Swansea as we wanted to visit the Tram Museum by the Marina. This museum is open only on Wednesday and Saturday and as today was Wednesday now was our chance. I suggested to Amanda that we go back to the bus stop then start to research bus times in case one comes along. When we got to the road a bus came along with 'Swansea City Centre' on its indicator board so we had to run for it. The doors shut just as we got there but the driver did notice us and re-opened the doors. Nice chap.

But, there had to be a but didn't there, this turned out to be one of those buses which diverts from the short route to make a circuit of the suburbs. Luckily it wasn't as long as happened yesterday but I did say then that we learn from our mistakes; we obviously don't. We may have been more fortunate if we had missed that particular bus. We still got back in time for the Tram Museum except for one minor point; it wasn't open. I enquired in the Swansea Museum nearby to be told that only one of the two required volunteers had turned up that morning so they weren't allowedto open it. Bother!

A quick change of plan saw us heading back north in the direction of the railway station to a shopping centre called 'Parc Tawe Shopping Centre' just north-east of Castle Square. No, we weren't going shopping but we were planning to visit 'Plantasia'. The local council describe it thus:

'We decided to create a Rainforest in the middle of the City to highlight the need and importance of looking after and protecting the World we live in. So come in and walk around our Tropical Paradise, take time to learn about the plants and animals which call the beautiful Rainforests their home.' 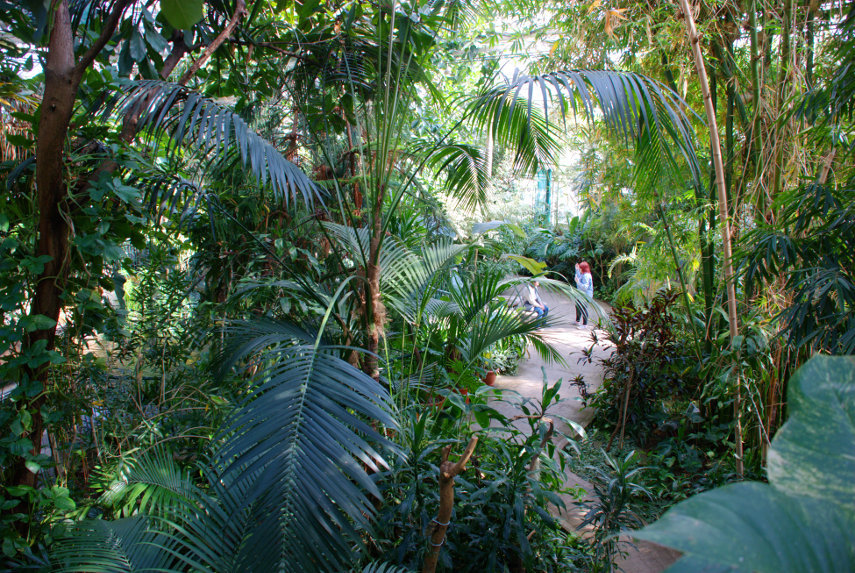 Lots of interesting plants and there is a large pond with a waterfall together with a lot of large fish. When we leaned over the rail to get a better look the fish came rushing over to have a look at us. We saw a notice later which mention packs of fish food to buy so I think that they must be used to visitors giving them food. They were out of luck this time. 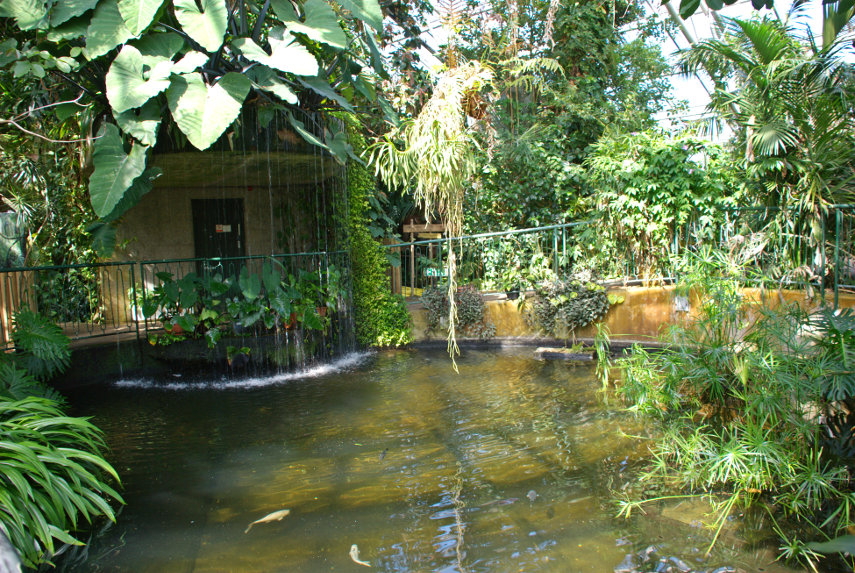 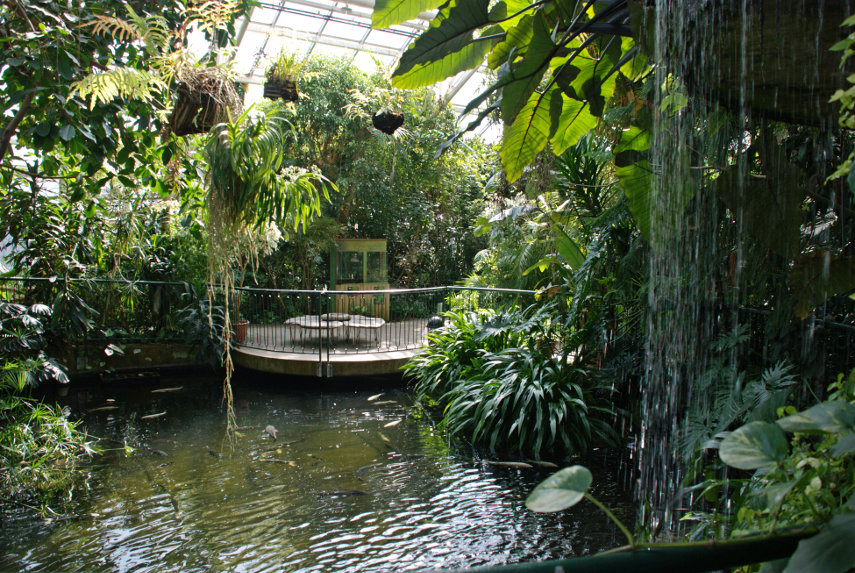 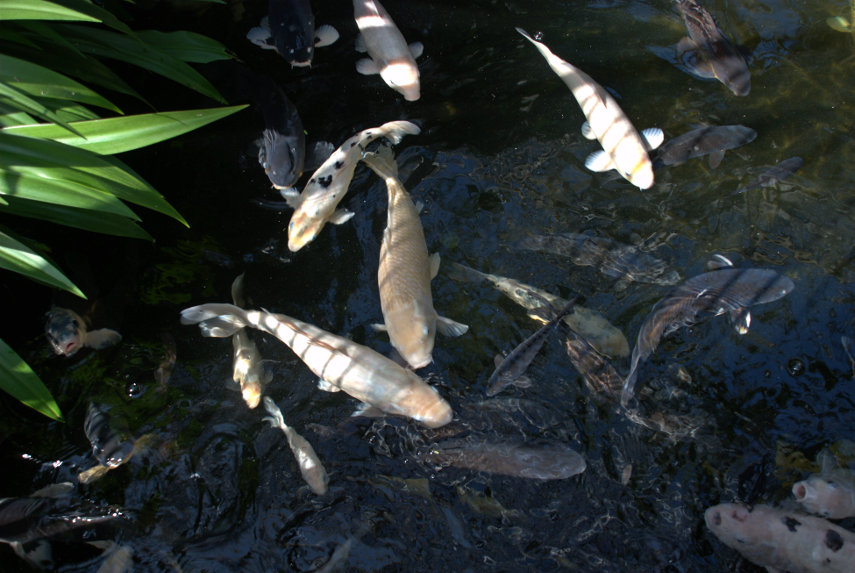 They also had two Cotton Top Tamarin monkeys which are among the most endangered primates in the world with a population of somewhere around 2500 individuals and which were apparently rescued from a zoo that was closing down. So they now have a home here in a wired off enclosure that appears to be the full hieight of the building.

They normally hide in the densest undergrowth which is what they were doing when we arrived but a bit of patience paid off when they eventually appeared. They are about the size of a domestic cat and rather cute with it. 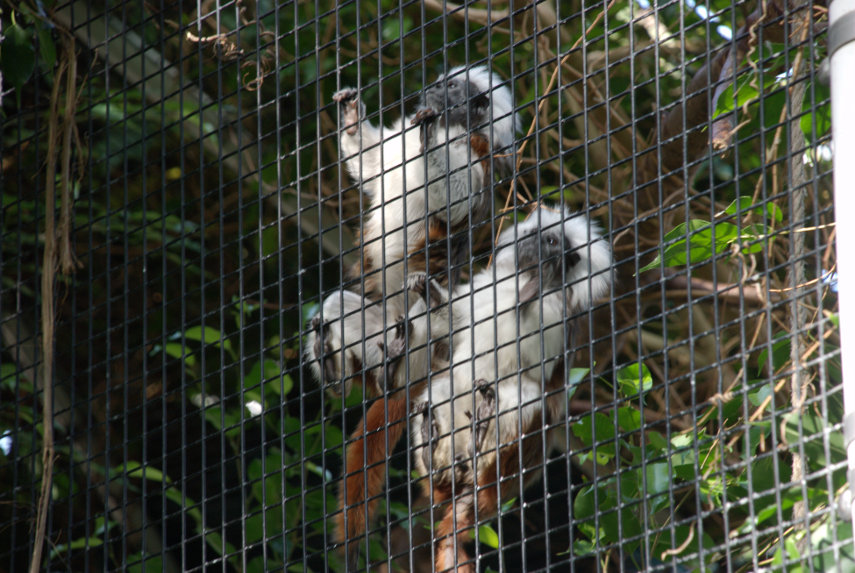 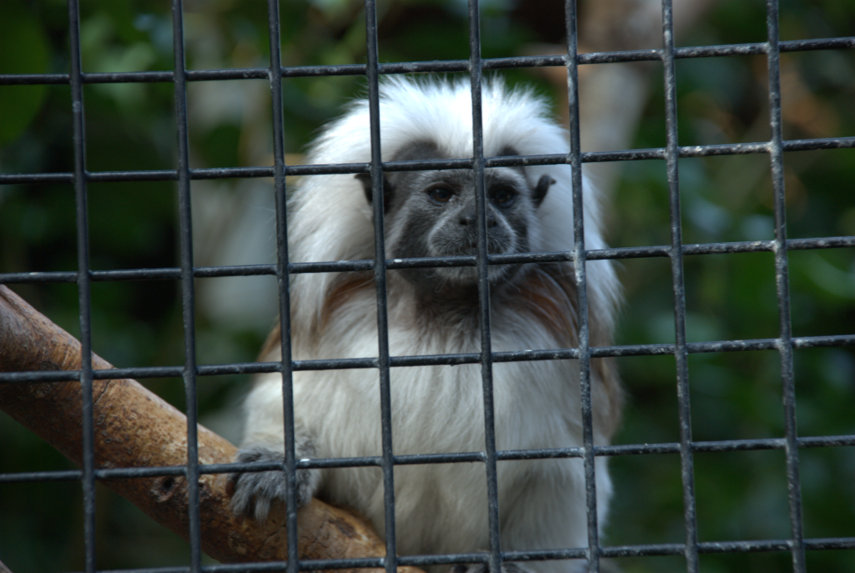 There is also a separate section where some tropical birds can fly freely although not this particular one. It does know a few words but wasn't at all communicative when we were there. I seem to have that effect on people. 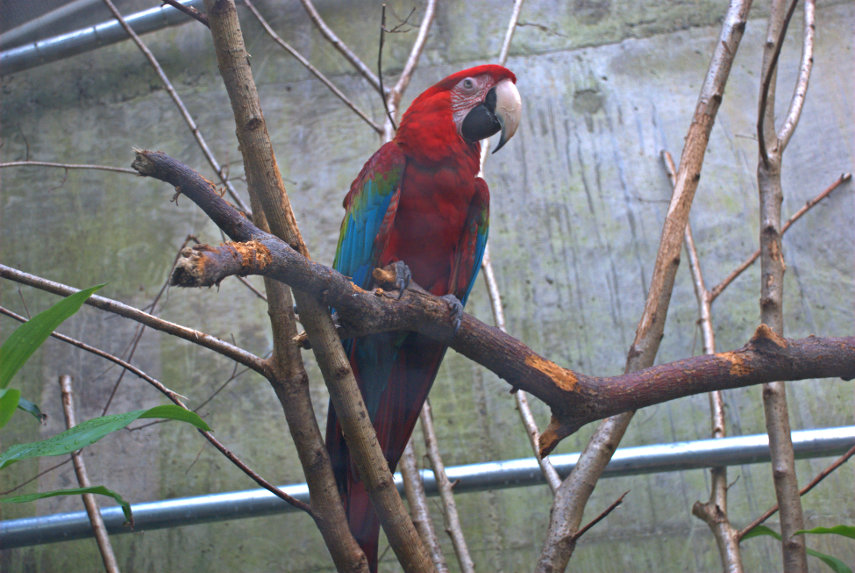 These Lorikeets were able to fly around and at one point I felt the draught as they flew close over my head. Cheeky little blighters. They are capable of talking and are also good whistlers. We didn't hear any of them say anything but their whistles were piercing. 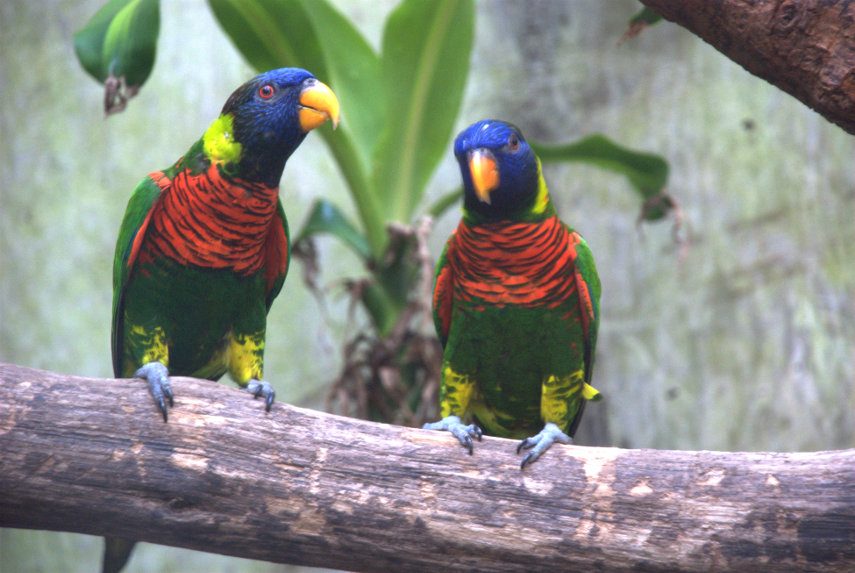 The end of another perfect day so back to the hotel for a meal and, hopefully, a good nights sleep. So I'll wish you all a good knight and, luckily, we have one to spare courtesy of Oystermouth Castle.

Sorry but I couldn't resist.