The hotel didn’t serve meals in the evening on a Sunday (yesterday) so we bought a Chinese Take Away and ate it in our room.

We spent a good night in a very comfortable bed. There was no apparent noise except when the traffic started to move in the early morning and that was only an occasional vehicle.

Breakfast was available in a room opposite the bar which had been, at one time, a Pizza Bar and was apparently now used only for breakfast. It was a pleasant enough room with most food laid out buffet style except for the cooked part which was cooked to order. The cooked breakfast was actually very good with a wide choice of items. The buffet was also very good and included fruit juices, cereals, fruit and pastries.

It was becoming obvious by now that, generally, there was only one person on duty at a time and they were expected to serve breakfast and look after reception. However the staff were unfailingly pleasant and well trained.

We left the hotel after breakfast bound for Lacock in Wiltshire. The journey took about an hour and just before we reached Lacock we drove round a bend onto the edge of the high ground we’d been on and there was Lacock in the valley below. Luckily there was an empty layby which enabled us to stop to take this picture. Lacock village and abbey are immediately above the red brick house in the foreground. 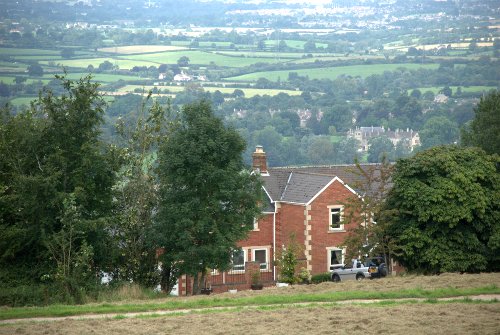 When we started out from Andover the sky was covered in thin cloud with an occasional blue patch showing but now the cloud had thickened with no blue sky at all. That makes photographs look very gloomy as you can see from one of the first photographs I took in the village from the churchyard. 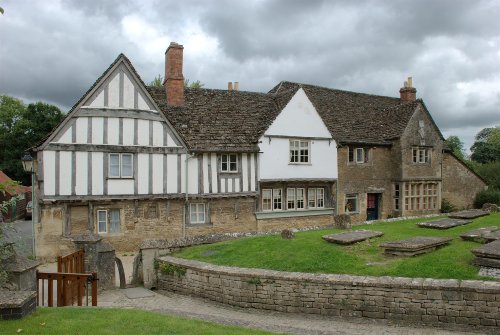 Whilst we were having lunch the cloud became much more broken and after lunch I took the same photograph again. 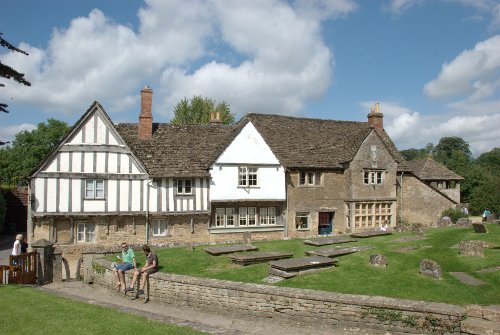 Doesn’t that look much nicer than the first?

For the time being we’ll go back to our cloudy morning. As well as looking round the village we wanted to see Laycock Abbey (National Trust). Photographs in the house are generally not permitted but in parts of the original abbey, such as the cloisters, photographs are permitted and it wouldn’t matter what the weather was like outside.

On the way to the abbey we went in to this 15th Century Tithe Barn in the village. Quite an impressive structure. 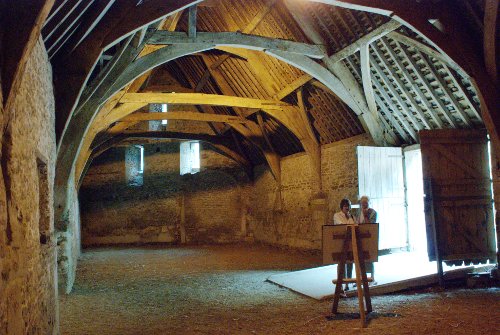 Lacock Abbey was founded in 1232 as a nunnery but was, of course, dissolved by Henry VIII and in 1539 it was sold and converted into a private home. The medieval cloisters were retained and, apparently, have been used in the Harry Potter films. 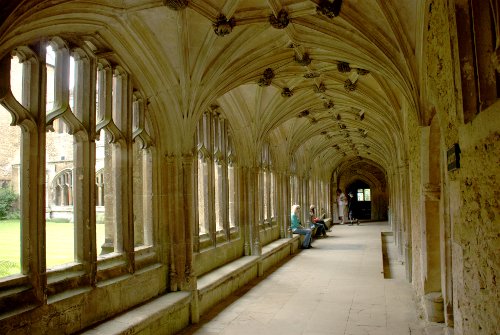 One of the most famous inhabitants of the abbey was William Henry Fox Talbot (1800-1877) inventor of the negative/positive photographic process. In 1835 he created the first known example of a photographic negative taken of an oriel window in the abbey. I wonder what he would have though of my digital single lens reflex?

This shows part of the south side of the abbey with the main entrance. 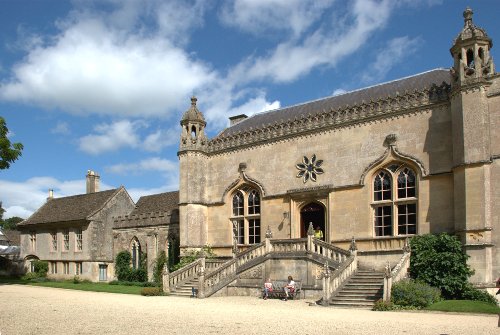 After looking around the abbey we went back to the village, now that the sun was out, where I was able to take some better photographs. If only all the streets were this clear of parked vehicles. Even this street was clogged with parked vehicles earlier in the day and just chanced to be clear on this occasion. 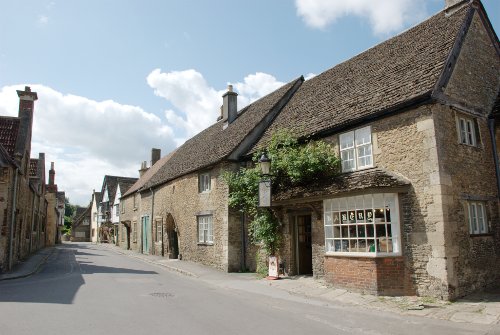 Most of the streets seem to be clogged with parked cars and vans most of the time. The village has been used many times in ‘period’ films at which time, so I understand, all the vehicles are cleared away. I wasn’t so lucky.

There are some nice old buildings here including this one behind the church which is now a pottery although I don’t know what it might have been earlier. This area is called the Tanyard which may give a clue as to its original use. 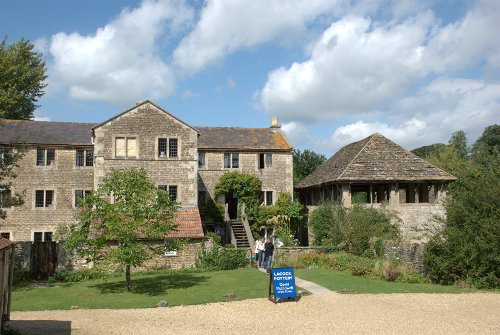 Having seen all that we thought we could see we started back for Andover but we intended to stop off just this side of Devizes to see something unusual. 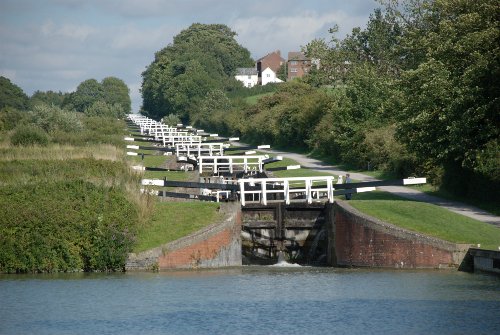 This is part of the Kennet and Avon Canal and each of those little white footbridges delineates a lock – 16 in all in this giant stairway. On this stretch of the canal there are 29 locks in the space of two miles of which this section is the most impressive.

There is a car park at the top which is where we parked and I walked all the way down for this photograph and now I’m going to have to walk all the way back up. Part the way up I met some narrowboats coming down. This one is waiting for the water level to drop so that they can then move into the next lock down. 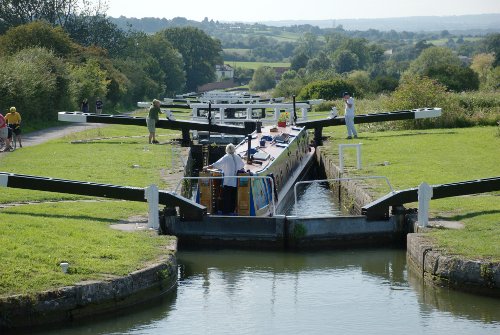 This narrowboat is moving out of one lock into the next. The process of negotiating all 16 locks in the stairway takes, I believe, two to three hours. 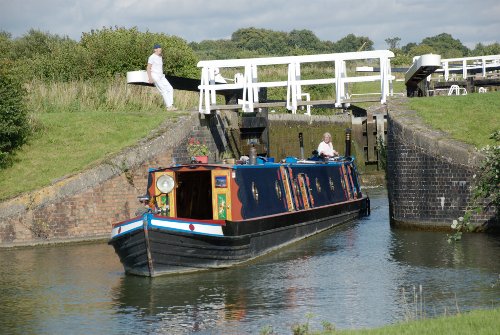 I rendered some slight assistance at one lock by opening one of the two gates. This is done by leaning back against the arm and pushing with one’s feet. The little radiused brick path has raised sections so that it’s possible to get a good grip with one’s feet. Having done my good deed for the day we continued onward and upward. 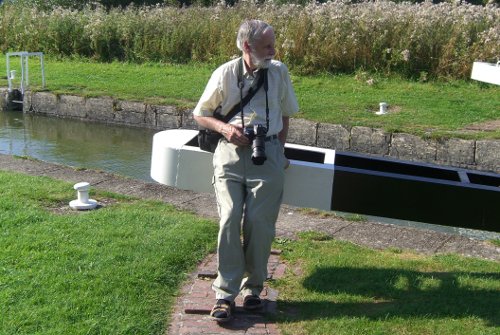 Just before we reached the top I spotted this heron perched on an inflatable barrier on one of the large side ponds. A very handy fishing platform. 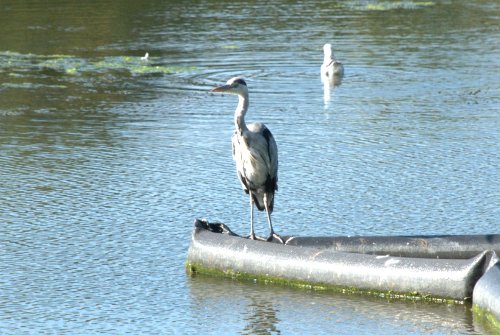 From here we return to the Danebury Hotel in Andover where we are prepared to try one of their evening meals. I suppose it’s only an evening meal from our point of view as they appear to serve cooked food all day.

On our return we discovered that the only place we can eat is the Public Bar which we share with three coin-in-the-slot gaming machines covered in flashing lights, a giant television, a pool table, loudish ‘background’ music and numerous gentlemen with heavily tatooed bare arms.

Ah well it’s worth a try.  The food turned out to be pretty average and not as good as one might expect in many pubs these days. One of the men in the bar apologised for another’s bad language which neither of us actually noticed but thought it was a nice gesture.

Looking around at the various signs in the bar area it appears that they are catering specifically for the heavy drinking fraternity with such as ‘Buy two glasses of wine and get the whole bottle’ sort of thing. Their main trade is apparently on Friday and Saturday nights when, thankfully, we shall be long gone.

The meal passed uneventfully but we decided not to eat there on our third night.

Tomorrow we hope will be in-spiring.