Today is Salisbury day. We head off to the Park & Ride Car Park on the outskirts of Salisbury but just before we get there we find ourselves at a junction with the entrance to the Old Sarum site opposite so we elect to go in This is our first ring.

Car parking turns out to be free but entrance to the central part of the ring is chargeable so as it is now cloudy overall we decide not to go into the central area. There is a good view from where we are, allowing for the cloudy conditions, and we can see Salisbury Cathedral with its very prominent spire. 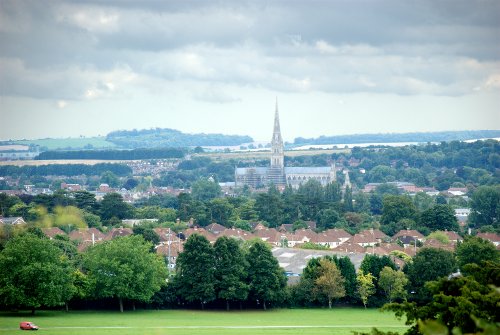 This is the central, raised, area which we didn't visit on this occasion which was the original site of the City of Salisbury including a castle, palace and cathedral. I gather that there are some remains of the old Normal Castle but nothing particularly spectacular and I believe that the original cathedral was completely demolished leaving just the foundations laid out like a floor plan. 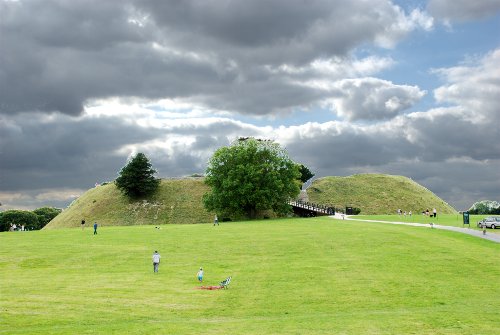 The mounds and ditch were built during the iron age then adopted by the Romans and subsequently taken over by the Normans. The defensive ditch around the central area of Old Sarum is pretty deep and steep. 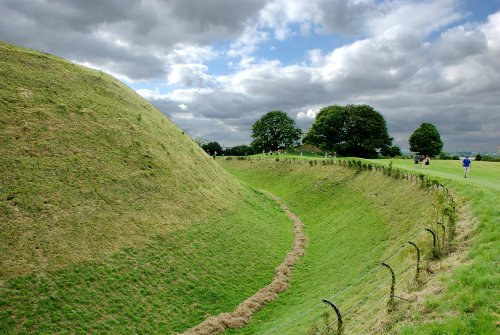 On to the Salisbury Park & Ride then a short bus ride into the city. As it was a cloudy day we went straight into the cathedral which we found, on first glance, a little disappointing. It didn't generate the same levels of interest that we found in, for example, Winchester, Wells and Norwich. The nave looked rather empty with little in the way of stained glass in the windows. 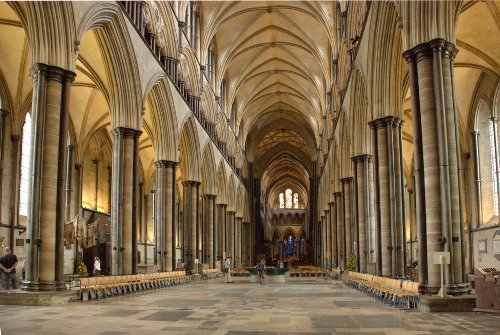 They did, however, have the oldest (Medieval – 1386) working clock in the world which has no face and only strikes the hours. 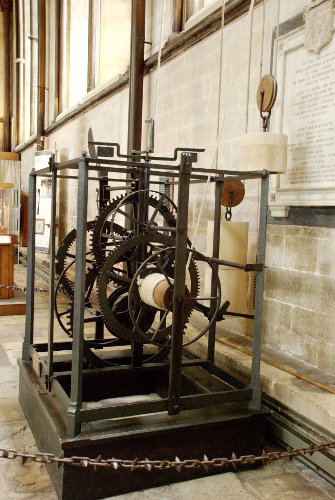 This view shows one of the arches around the crossing under the tower looking through into the Quire which had some remarkable medieval wood carving on the stalls which date from 1236 – the oldest complete set in England. 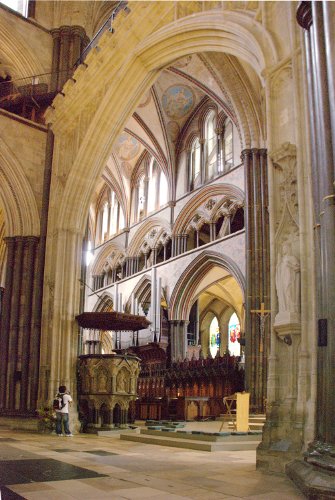 Looking from the Quire, past the Audley Chapel, towards the East Window which was designed in 1980. 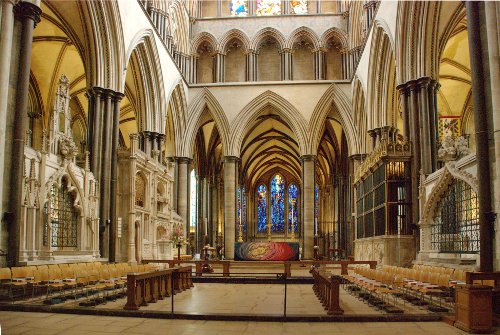 We rather liked this next view around the tower crossing. It reminded us a little of the Scissor arches in Wells Cathedral. 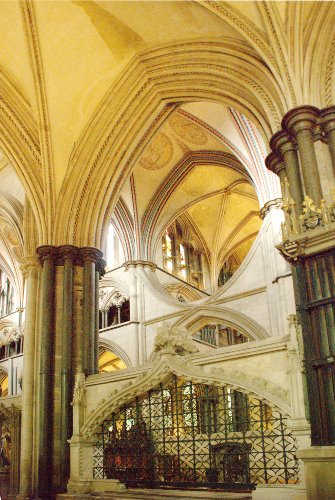 The Cloisters are rather nice and are, in fact, the largest of any British cathedral. They are also unusual in that they have never been part of a monastic foundation which is normally the case. 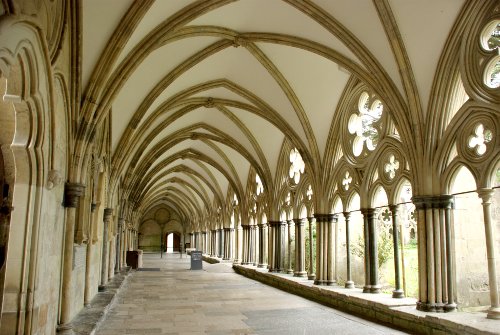 From the Cloisters one gains entry to the Chapter House which holds one of the four surviving original Magna Carta, written on vellum in abbreviated medieval latin, sealed in 1215 by King John. Photography is not permitted in the Chapter House.

We finally ventured outside and managed to capture a five second spell of sunshine lighting up the West Front of the cathedral. The sky gives a good idea of what it was like generally throughout the day. 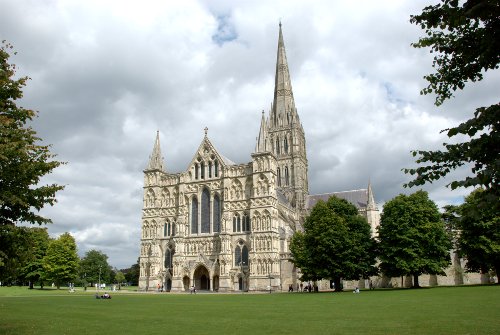 We left the cathedral precincts by this gate and were back in the surrounding city. As it was around lunch time we started to look for somewhere that would provide a substantial lunch to substitute for the meal we weren't going to have back at the Danebury Hotel in Andover. 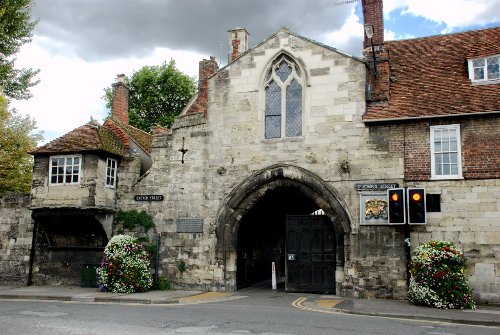 Wandering around we stumbled across 'The Polly Tea Rooms' and liked the look of the menu. We were both glad that we chose to go in because the prices were reasonable and the food and service was excellent. Recommended! It's near Bridge Street not far from here. 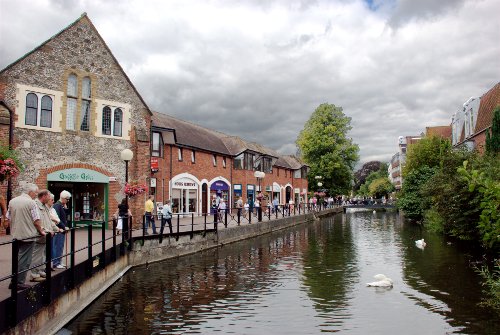 We didn't really have as much time here to explore as we would have liked. This was one of the streets we wandered through where we noticed this old timber-framed building. 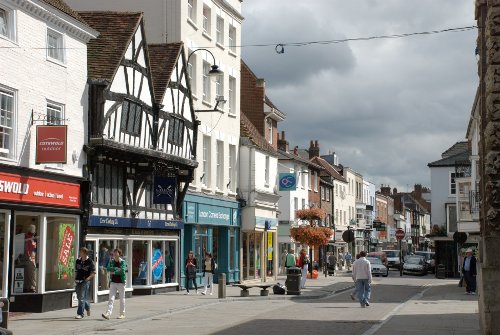 And we eventually found the old market cross complete with a little market. 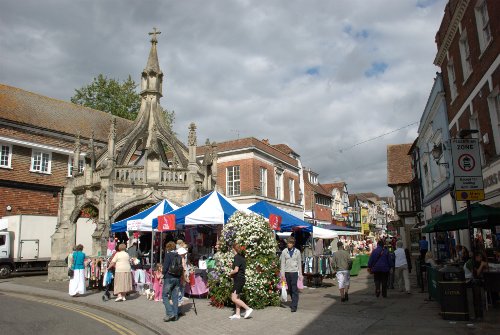 It was getting late in the afternoon now, 5:30 PM, so we decided to call it a day and headed back to Andover. However on the way back we noticed that we would be going past Figsbury Ring, our second ring of the day, and as the weather was now taking a turn for the better, we thought we'd pay it a visit.

Figsbury Ring, like Old Sarum, is a prehistoric Hill Fort and the evening light up here was absolutely wonderful. Here is Amanda standing on the outer bank looking back towards Salisbury and we could see the spire of Salisbury Cathedral in the far distance. 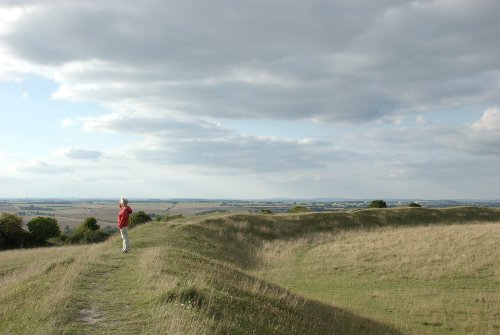 On our way around the ring we spotted an Adonis Blue butterfly. Not a common sight although there is a colony known to exist here. Very pretty. 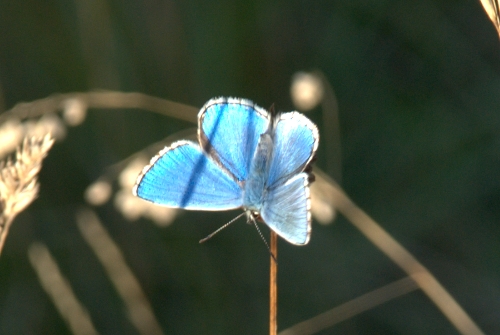 So back to our palatial lodgings and tomorrow we leave for home.

2 thoughts on “Oxon-Hants-Wilts: Two rings and a spire.”