No, not our national flag but our first day trip of 2010, yesterday.

The sky. A few weeks ago we saw the last, I hope, of the exceptional cold weather and it warmed up a bit but brought with it grey skies and a generous helping of rain. Then suddenly this week we have clear skies which, of course, brings sunshine so we couldn't afford to waste it and went to Anglesey Abbey again but to see the winter garden this time.

We decided to cut across country in a, more or less, straight line because we wanted to go through Haverhill, in Suffolk, to deliver a rather old colour laptop computer to a computer museum there. The road to Haverhill meanders across the gently rolling landscape of Essex giving us views of a coloured patchwork of fields in varying shades of green and brown bathed in the bright morning sunshine. We had to take it a bit steady as this road is very winding and going too fast can cause Amanda to get travel sick.

Passing through villages such as Coggeshall, Earls Colne, Baythorne End, New England (bit of a detour?) and Sturmer we eventually crossed into Suffolk and arrived in Haverhill about an hour after leaving home. Having delivered said laptop we set off again through Great Wratting, turning North-West through Brinkley towards Lode, which is the little village next to Anglesey Abbey, and we arrived at Anglesey Abbey about an hour after leaving Haverhill.

We shouldn't have been surprised, but we were, to find that the very large car park and the overspill car park were almost full with few spaces left only 45 minutes after opening time. It's apparently extremly popular at this time of year. 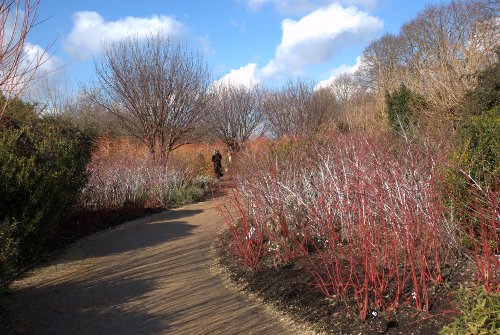 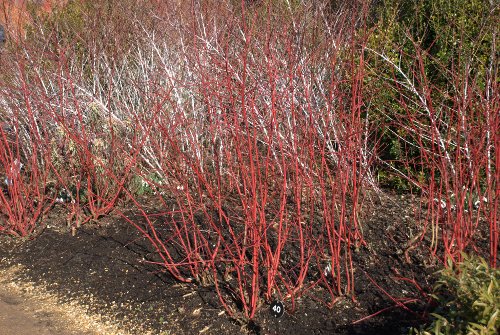 What spectacular colour there is along this path. This garden is cleverly laid out and as one progresses along the path so the character of the surroundings changes. The initial startling colour is provided by the different dogwoods either side of the path. Some bright red, some white, some a glowing orange and some yellow. 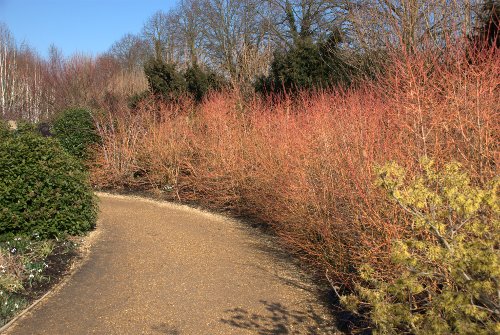 Later even the trees join in the colour spectacular. 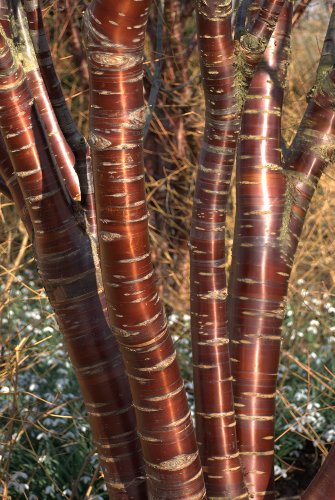 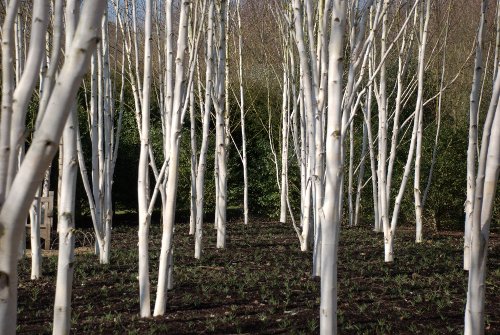 We finally left the Winter Garden feeling a little dazed by the surfeit of colour. 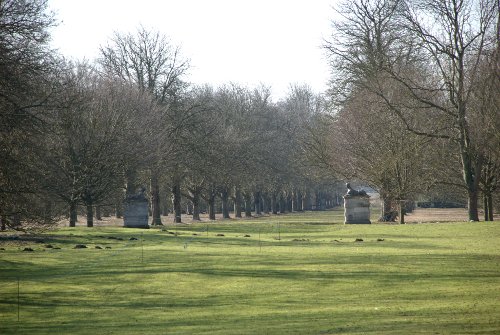 and this tree sheltering a beautiful patch of spring flowers much as a mother hen shelters her chicks. 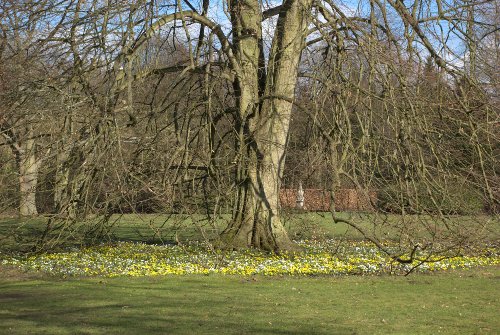 Snowdrops. We eventually started down the Woodland Walk, renowned for it's Snowdrops, and yes, there are rather a lot. 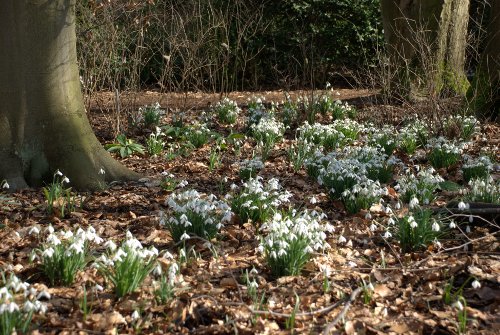 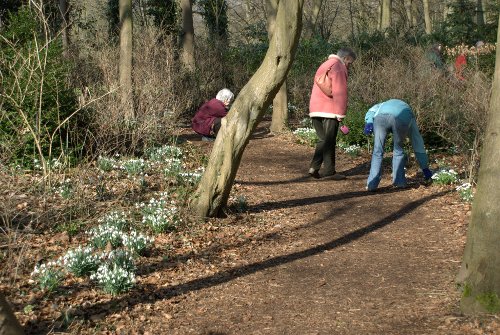 There were plenty of other visitors around and that person crouched to the left of the tree, trying to look like a Snowdrop, couldn't possibly be Amanda could it? Well, yes, of course it could. There were Snowdrops all along the Woodland Walk in varying numbers and it was quite a show.

By this time we thought that a spot of lunch wouldn't go amiss so we made our way back to the entrance and the restaurant. We often don't have lunch at National Trust properties' restaurants for two main reasons. Their prices always seem to be rather inflated and because, in spite of that, their restaurants always seem to be very popular. That popularity may stem from the fact that there is often nowhere else convenient to go but it does, at lunchtime, make them very, very busy. Looking into any of the restaurants at this time makes me think that if we do buy lunch is there actually going to be somewhere available to sit and eat it?

Anglesey Abbey at this time of year is extremely popular, with visitors wishing to see the Snowdrops, for about five weeks during the Snowdrop season. Consequently the restaurant was even busier than usual but we decided to have lunch anyway and joined the very long queue which actually extended out of the door of the restaurant into the entrance hall.

The staff behind the counter were working flat out and were serving people as fast as anyone could reasonably expect. However my first gripe is that the food at the counter is nowhere near as hot as it should be so that by the time one has collected one's meal then queued a little longer to get cups of tea or coffee and paid for it, collected some eating utensils, found a table and started to eat the food is only just warm. I don't like the feeling that the food has to be eaten quickly before it goes cold. We also had difficulty in finding cutlery that was actually clean. Overloading the dish-washer, perhaps, to keep up with demand?

The only vacant table we could find was covered in plates, cups and left-overs from the previous users which wasn't very pleasant and we were wondering what to do with all this stuff when a member of the restaurant staff did appear and cleared the things away. Whilst she was doing that someone else come up and asked her to do the same to another table. There are some large stands which are obviously meant for visitors to put their trays and crockery but there are no notices asking visitors to do this and some obviously do not. Really I think that the staff were a little thin on the ground but couldn't possibly work harder than they were doing but there should be more.

My second gripe was that the beef I had in my Beef Stew was the worst quality beef I've had in many years. More than half of the pieces of beef were so tough and rubbery that it was difficult to get a fork more than a little way in without pushing really hard. I did complain to the restaurant manager who, I have to say, didn't even try to argue but immediately offered to refund the cost of the meal which I accepted.

Overall lunch here was not a pleasant experience and I'm not sure I'd want to do it again under those conditions even if the food was good. Incidentally Amanda's main course was fine although she didn't have the same as me.

After lunch we left Anglesey Abbey and went the very short distance to the village of Lode to see what it was like. It wasn't generally a particularly attractive village but it did have some very attractive spots. 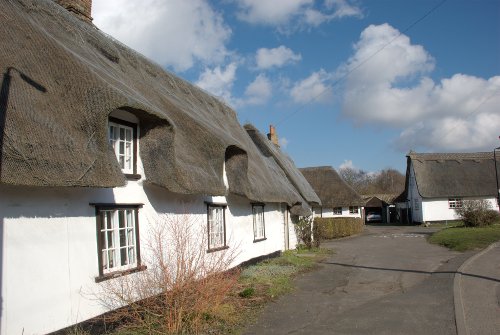 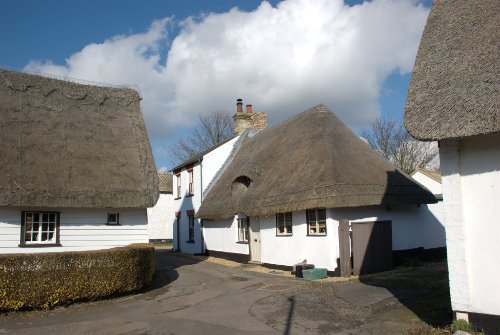 Once again it was time to return home. I wonder how soon our next trip will be?

5 thoughts on “Red, White and Blue”