We headed north, today, over the county border, and the River Stour, and into Suffolk. Our destination was Pin Mill – a small waterside community on the River Orwell.

We drove as far as the village of Chelmondiston where we parked in the small, free, village car park. The walk down Pinmill Road was an easy one and we arrived at the riverside close by the Butt and Oyster Inn. 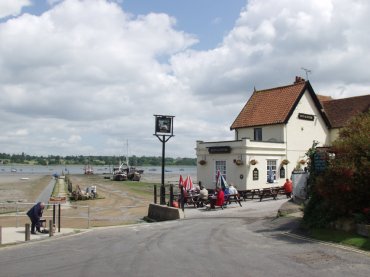 The tide was out when I took this picture and I imagine that with a very high tide this inn only just manages to keep it’s feet dry!

It was about time for morning coffee so we went in to the pub for coffee. The view from inside the bar across the river was very picturesque. Whilst we were drinking our coffee we noticed that their lunch menu had a very good range of dishes which sounded positively delightful but, unfortunately, we would have to leave before lunch for our next intended destination. I don’t know how good the food is but it certainly sounded nice.

After finishing our coffee we walked along the small hard which you can see next to the stream in the picture above and looked back to the Butt and Oyster. 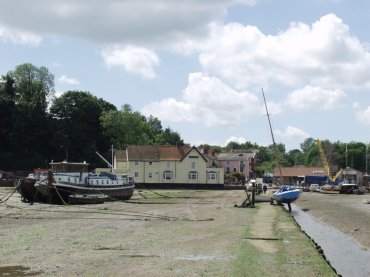 After a walk round we set off up the lane back to the car but, part the way up, we met this fella walking by the side of the lane. 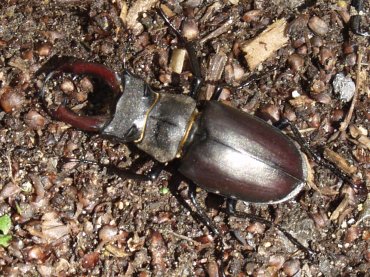 Isn’t he lovely? This is Britain’s largest beetle, a male Stag Beetle (Lucarnus cervus) which you won’t see very often. If this chap gives you the creeps then there is another piece of information which you should know – they can fly and do – frequently.

Amanda decided that he wasn’t terribly safe right next to the lane so she picked him up and put him on the verge.

We arrived back in Chelmondiston and set off in the car for our next waterside destination – Mistley back over the border in Essex.

The half mile stretch of road between Manningtree and Mistley runs alongside the River Stour and it is possible to stop anywhere by the roadside so that one can get out and look at the river which is over a half mile wide at this point.

The interesting point about this part of the river is the swans and it’s not just a few swans it’s a lot of swans. This is just some of them but there are more. 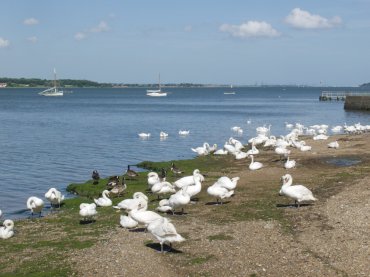 I spoke briefly to an Australian lady who said she’d never seen so many and why were they there? I wasn’t able to answer that question at the time but I can now. There are malting buildings by the river in Mistley where barley is malted in preparation for making beer and up to at least fifty years ago the barley was unloaded from barges at the quayside. The local swans soon realised that the barley which was spilled during this process was a constant source of food and there was obviously enough of it to support a large number of swans and so their numbers increased to form the colony here today.

We walked further into Mistley to look around and then made our way back to the car only to find an impolite lout strutting along the pavement as though he owned it! 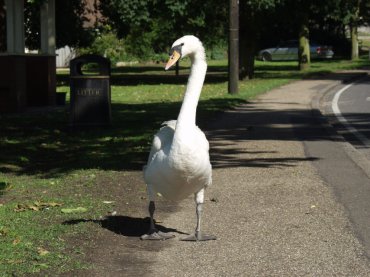 He looked a bit put out when we walked past without so much as a ‘by your leave’.

Back to the car and we leave for our next, and last, destination – Harwich.

Harwich used to be a bustling, working port and a little on the rough side I think. Now, however, all the big stuff such as the international container ships and passenger liners have been moved around the corner to Parkeston Quay and Harwich has become a quiet, picturesque and interesting little town. If you are interested in things maritime then Harwich is the place for you and even if maritime history doesn’t hold you spellbound there is still plenty of interest. 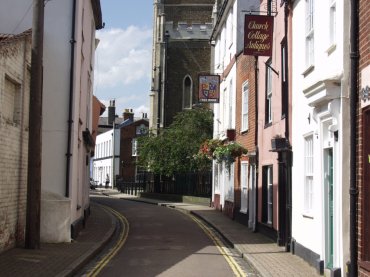 There is remarkably little traffic in the town and there are narrow backstreets with many old buildings. There is lots to see on the waterfront including the Ha’penny Pier, Lighthouses and a Mayflower exhibition – the Mayflower was built in Harwich. This is me being friendly with a young lady I met inside the Mayflower Exhibition. 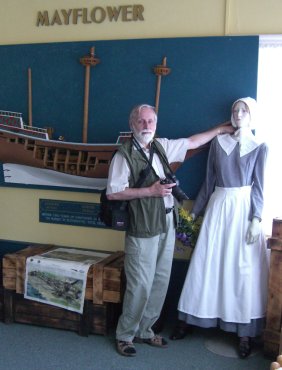 After Harwich it was back home. We enjoyed today very much and lots more photographs from this trip, together with many new pages, will eventually appear on the web site in due course. If you want to be notified about updates as soon as they appear then see the updates page.