Today we are going to foreign climes – yes, we are leaving Wiltshire and venturing into Somerset. Today is Frome day! Frome (pronounced 'froom') is a small market town about 10 miles from Mere, to the north, and about the same distance east of Wells.

Needless to say it didn't take us long to get there and we quickly found a car park. This car park is a short stay (max. 2 hours) and is Pay & Display. The good news is that the restrictions and charges don't apply on Sundays so we parked free and the car stayed there for our whole stay.

As luck would have it the car park chanced to be very near the Church of St. John the Baptist which would be difficult to miss. 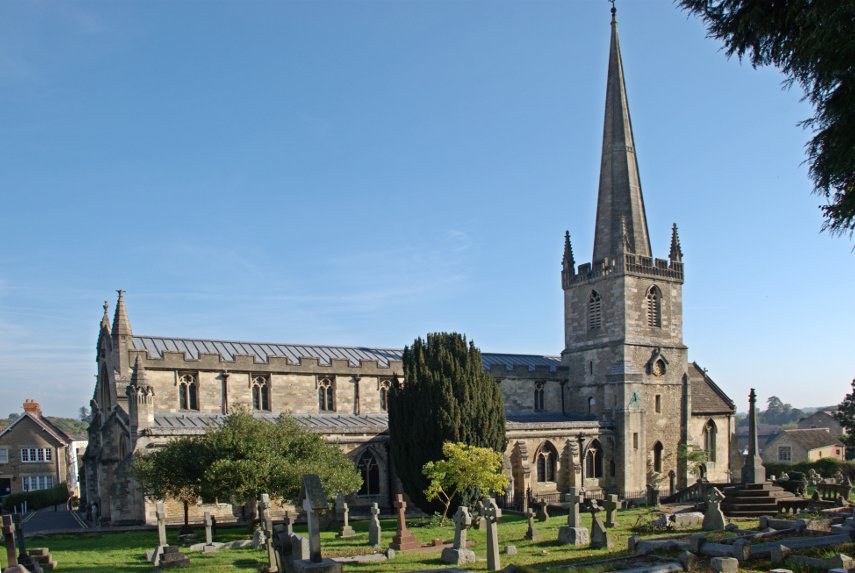 The original Saxon church was built in 685 AD but was replaced by the current building which was constructed between the late 1100s and the early 1400s and was further restored around 1860.

An interesting external feature is the unusual clock face together with a nearby sundial. 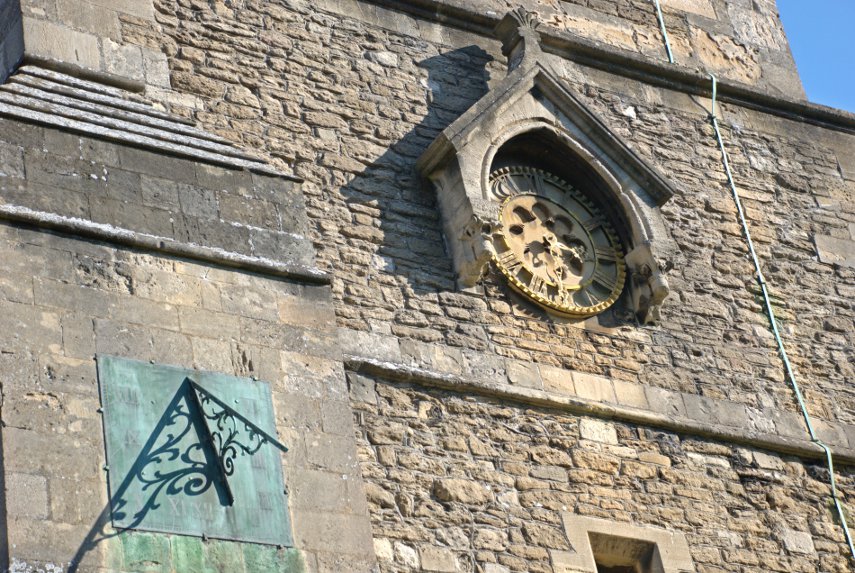 There is a spring in the churchyard which is fed into a channel in nearby Cheap Street, one of Frome's medieval streets, which runs the length of the street before disappearing underground. There is a good flow of water in this channel so be careful where you put your feet. 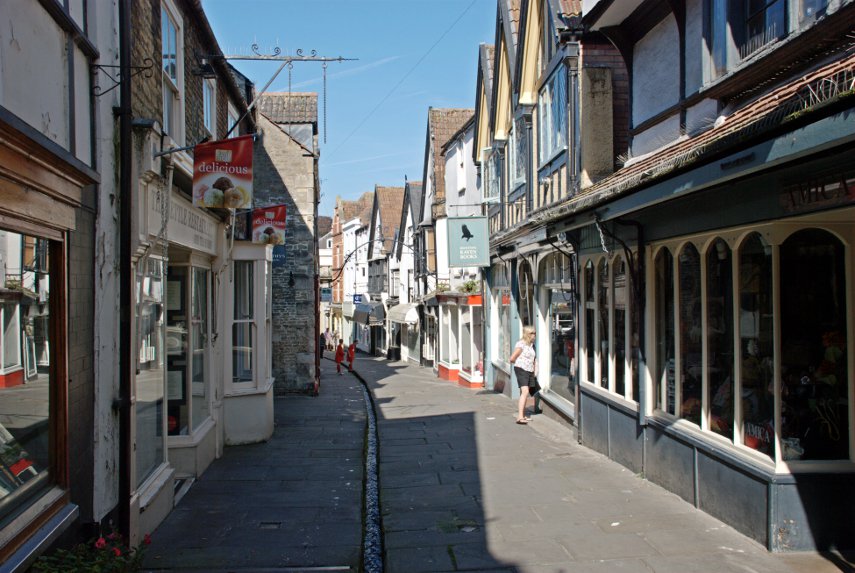 Cheap Street runs from near the church down to meet the Market Place near the Market Cross, also known as Boyle Cross, in the shadow on the right. 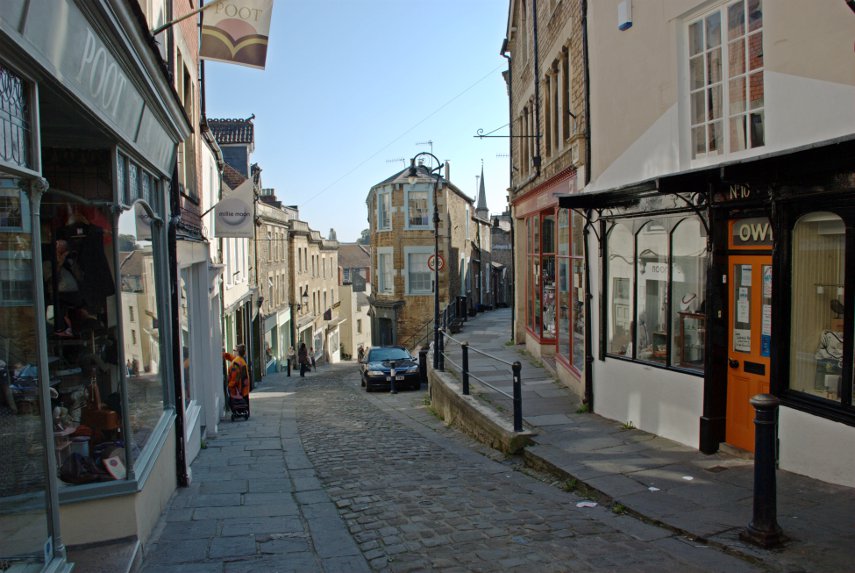 This footpath, Paul Street, curving off to the right in the picture above, cuts across to Palmer Street. 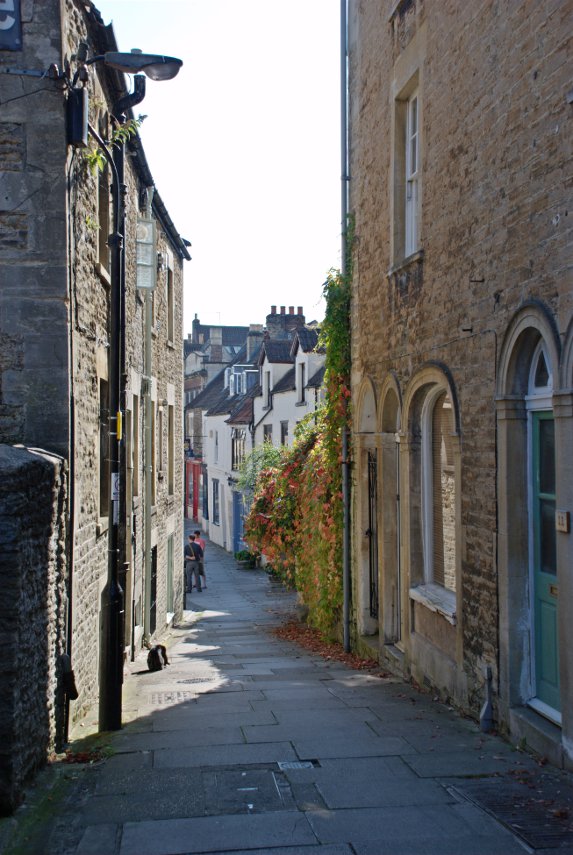 Near the top of Catherine Hill is an attractive little side lane called Sheppards Barton accessed via some steps. 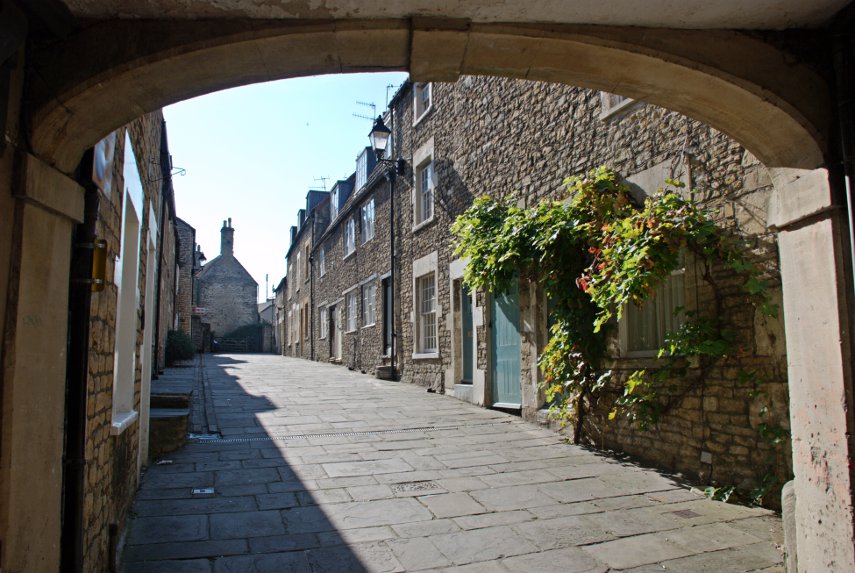 Part way along Paul Street Amanda stopped to discuss the weather with one of the locals. 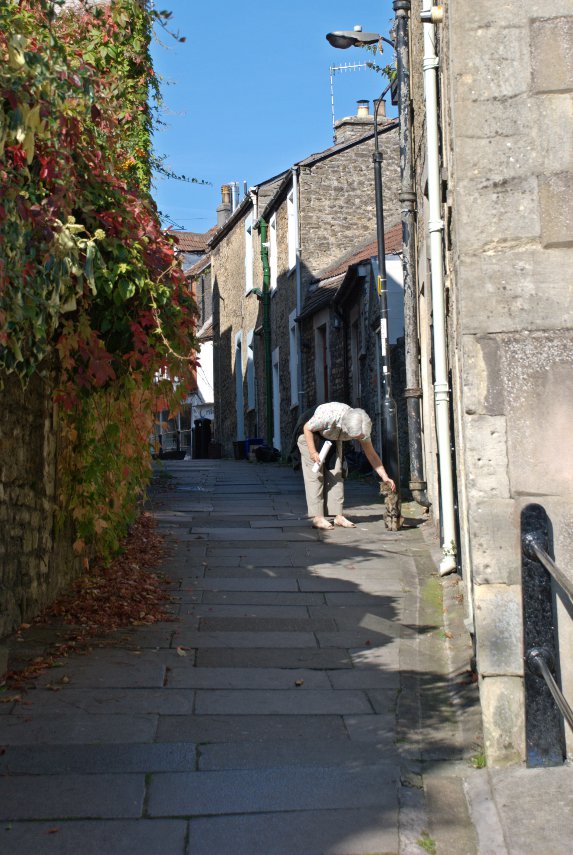 We wandered back towards our car going back up Cheap Street and at the top, on the corner, was a small cafe called La Strada where we had a light lunch.

After lunch we drove out of Frome, south east, towards Warminster and just outside Warminster we stopped near Cley Hill. 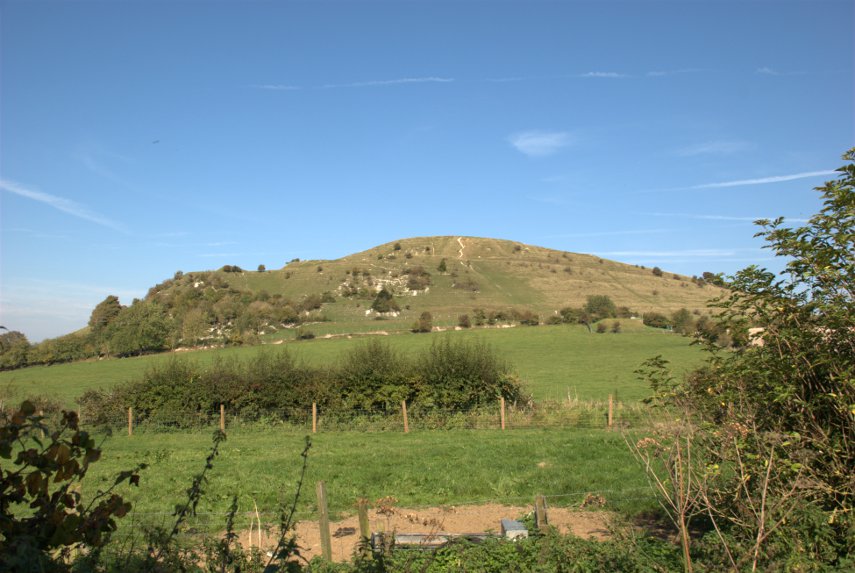 Hmm, looks a bit lumpy. "Surely", I hear you say, "you're not silly enough to climb another hill?" but, unfortunately, yes, we are silly enough. Besides there's a Triangulation Point up there somewhere and Amanda collects them – remember? The climb wasn't as bad as it looked and it didn't take long before the summit was in sight. 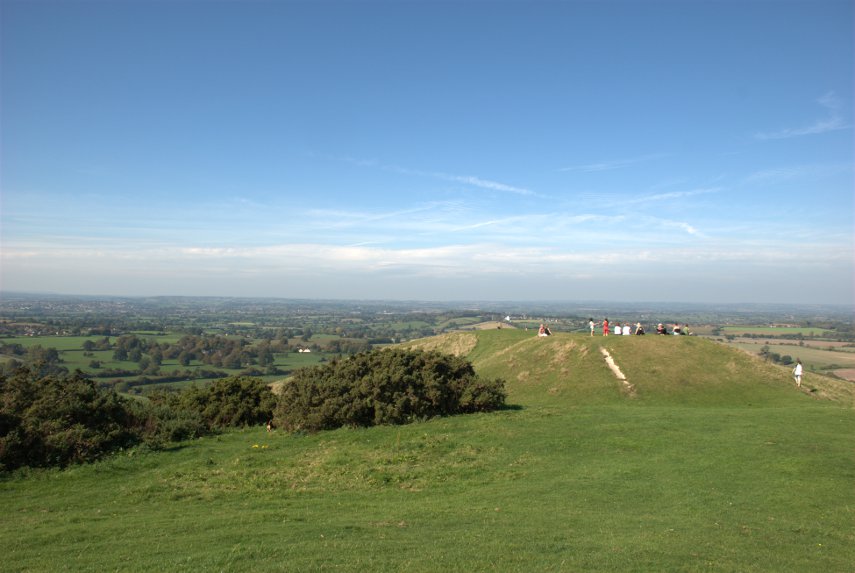 And that's Warminster down there. 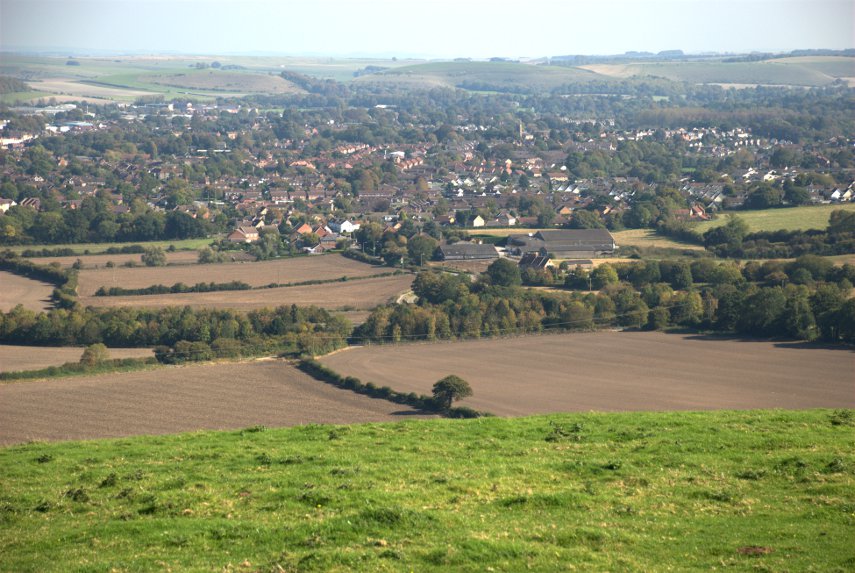 Amanda was still heading purposefully for that triangulation point which can just be seen on the top of the rounded hump ahead. 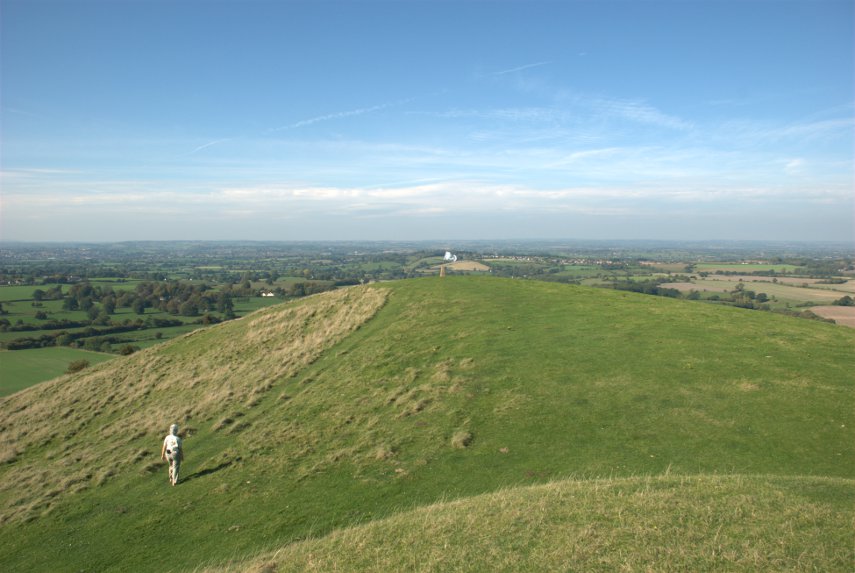 So now we can say that we've been there and done that. Back to the car, easier on the way down, and off on a very short drive to a car park between King's Bottom (Sorry your majesty) and Hitcombe Bottom. We are now near a well known estate so a short walk through the forest reveals this: 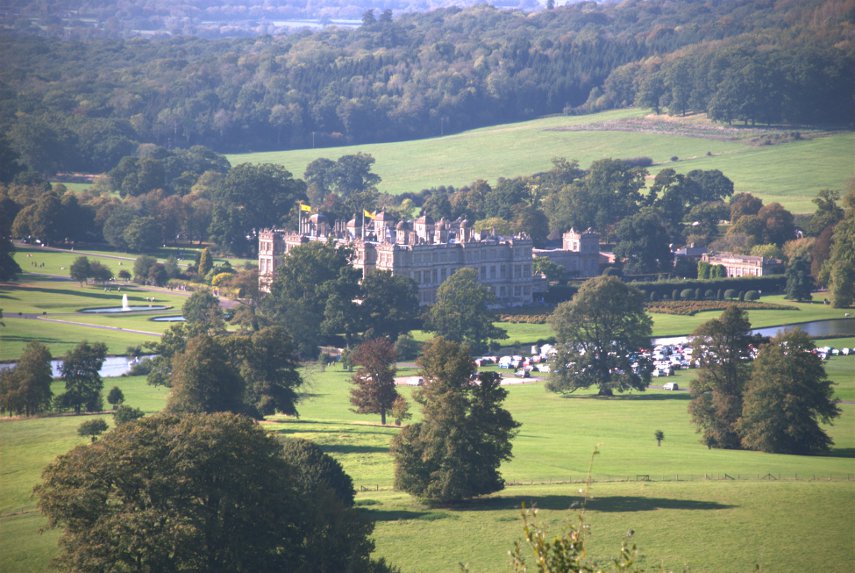 Longleat House, a stately home owned by the Marquis of Bath, a somewhat eccentric gentleman, and open to the public. We sat here for a while looking at the view and then decided it was time to go back to Mere. Tomorrow we go home but not without another diversion.