We wasted a half-day today! It was, however, unavoidable. We left home at 9:30 AM and arrived at 12:30 PM after 3 hours of driving. That's the problem with travelling it has to be done to get anywhere but it could be better spent exploring.

The weather of late has been constantly cool, and raining for a lot of the time, but then last Monday, 21st May, good weather was suddenly forecast for at least 3 days so we booked some accommodation and left home on Tuesday, 22nd May for Wiltshire.

We had a clear run as far as the M25 and although there were no visible problems we started to see electronic signs displaying a message 'M4 junctions 6 to 10 long delays'. Guess what road we were planning to use for the next part of our route? We kept going past these signs and eventually decided that if we could see traffic queueing on the M4 slip road we would try an alternate route.

There was no queue on the slip road so we took a chance and went on to the M4 at junction 4. There were no signs of problems by the time we reached junction 6 and to cut a long story short by the time we passed junction 10 traffic was still flowing freely. There were no problems at all and I can understand why drivers tend to ignore such signs which seem not to be turned off once the problem has been cleared.

We arrived at Avebury under a clear blue sky with temperatures forecast to be around 75F. We didn't come for the stone circle but we did come partly for the stone West Kennett Avenue and partly to see inside Avebury Manor which has recently been restored. The restoration of Avebury Manor by the National Trust was the subject of a series of programmes on BBC television and it was very, very interesting so we were here to see for ourselves.

However, first things first! West Kennett Avenue starts from Avebury stone circle and winds across the landscape to the Sanctuary. It was originally lined with large stones of the sort which are to be seen in the stone circle but only some now remain.

This is a picture which I took on our previous visit in October 2011 which does not really show it to best effect. 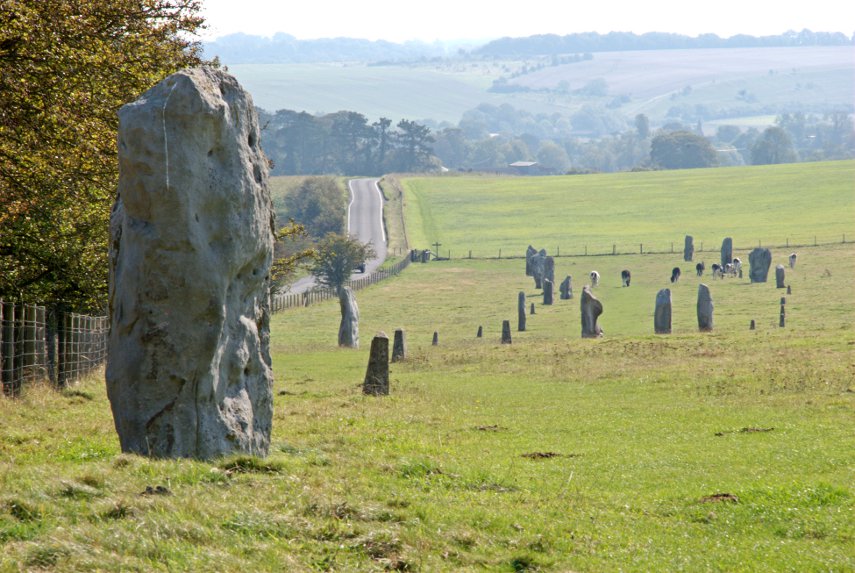 So after lunch we walked along West Kennett Avenue to the lower end. This is what we saw this time. 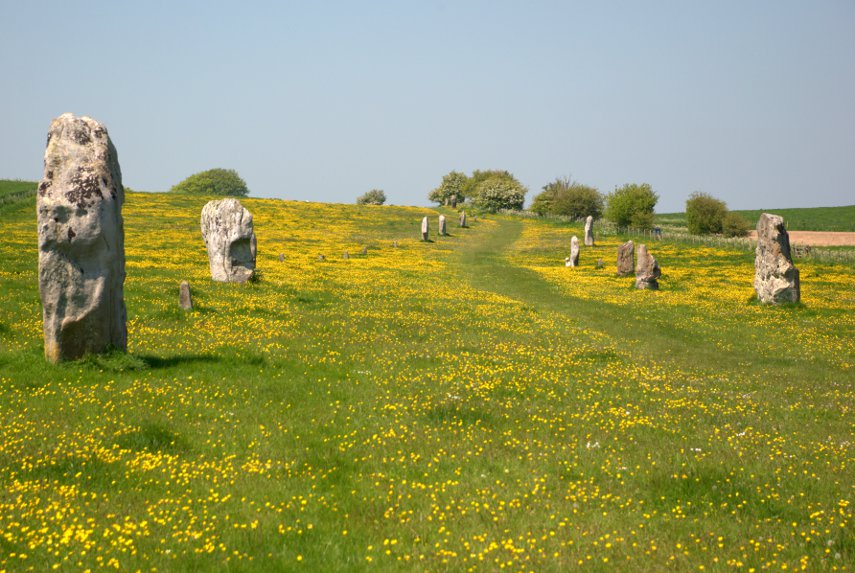 Don't those buttercups make a difference? They show up the path along the Avenue very well apart from looking beautiful in their own right. There are also daisies in there somewhere but they aren't easy to see at a distance.

There is an old english folk song called "Strawberry Fair" of which the first two lines are:

As I was going to Strawberry Fair
Singing, singing, buttercups and daisies

Mid-June is probably strawberry time and buttercups and daisies are still in flower at that time but the first flush of Buttercups and Daisies appear towards the end of May. 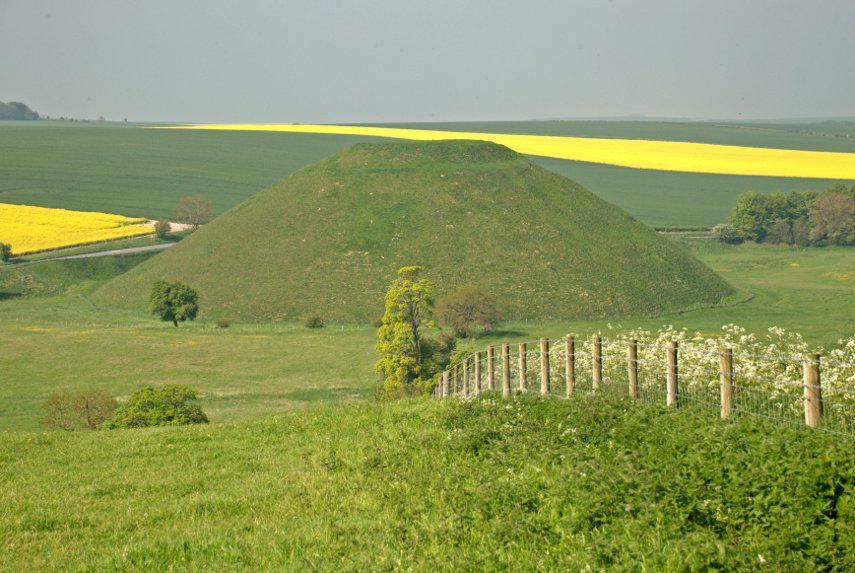 We are just above the top of Silbury Hill at this height and looking a little left of Silbury Hill we could also see West Kennett Long Barrow which we have already featured on the web site. Even the standing stones which mark the entrance are visible at the left-hand end. 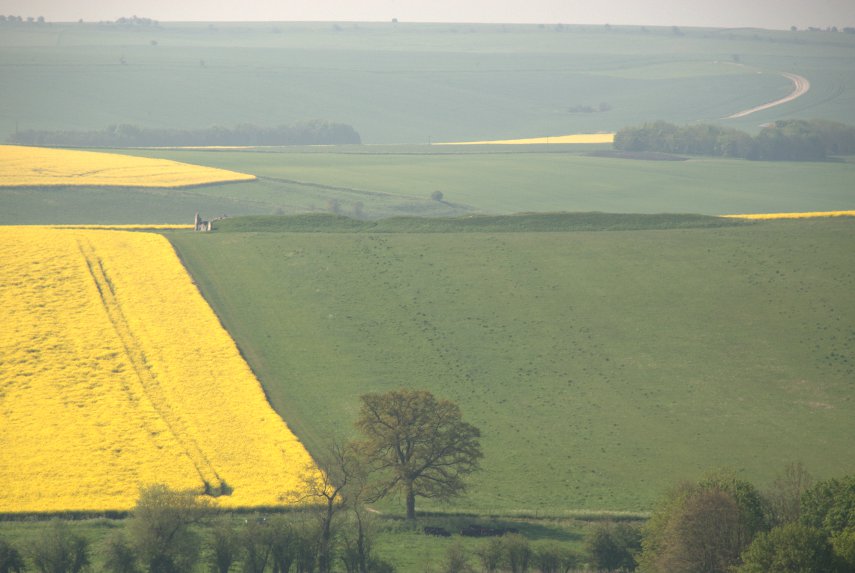 We went back down Waden Hill to the end of the Avenue and passed one of the locals looking a bit sheepish. Well you'd probably feel sheepish if you were seen wearing a thick wooly coat on a hot sunny day. 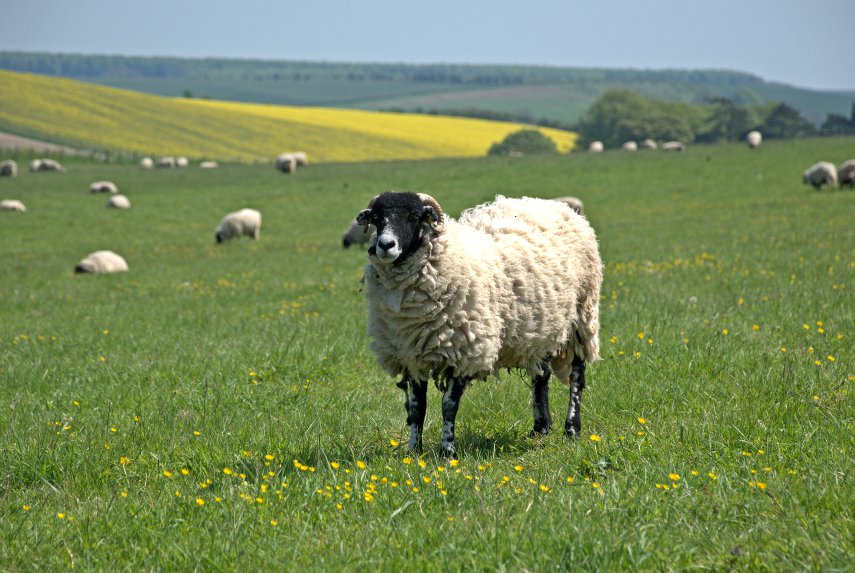 From here we went back to Avebury to look inside Avebury Manor. For the restoration it was decided to restore each room at a different time in the Manor's history, from the age of Queen Elizabeth I to the eve of World War II, and it is one of the few National Trust properties where visitors can touch, handle, sit in and lie on the furnishings.

This shows the Dining Room, with hand painted Chinese wallpaper, in the Georgian era. 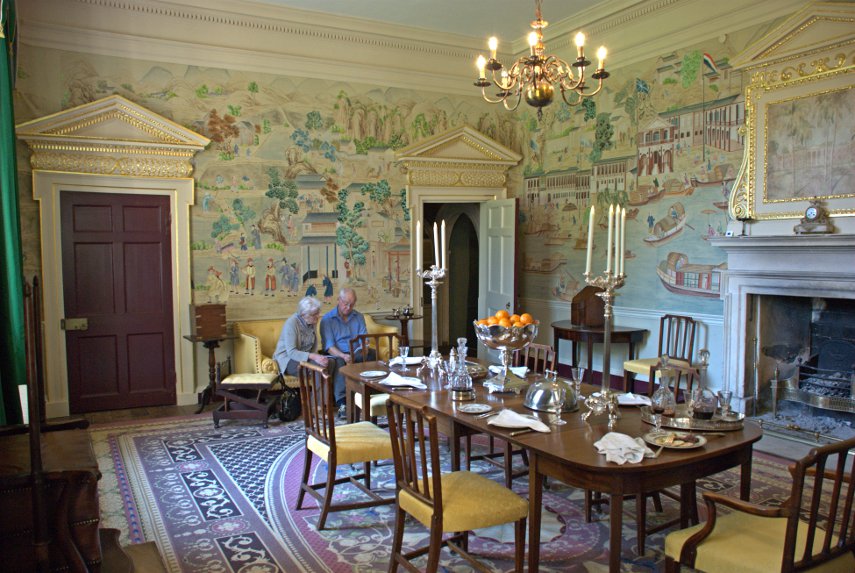 The Victorian kitchen with one of the visitors, whose name shall remain anonymous but which starts with "A", leaning nonchalantly on the Dresser and she didn't even do the washing up. 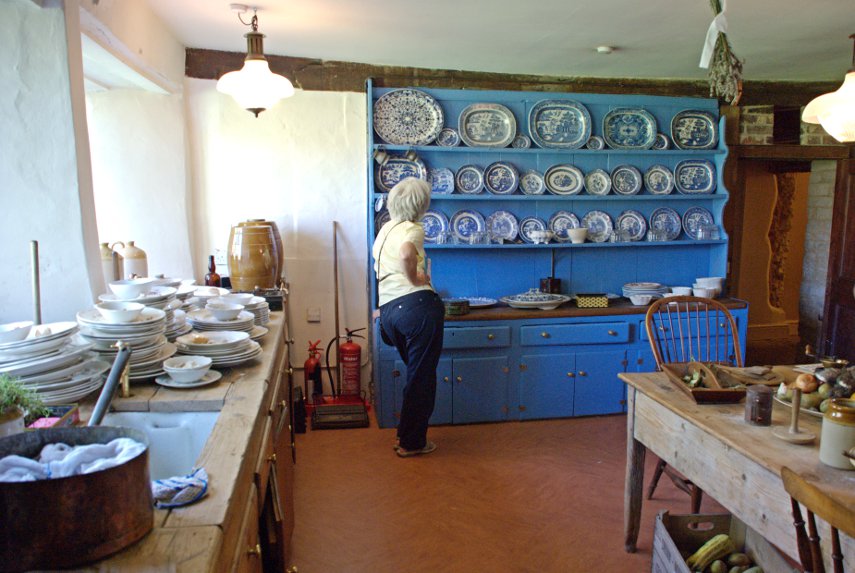 This is a rather opulent bedroom, part of the Queen Anne Suite, and,yes, you could lay on it if you wanted although it would be nice if you took your shoes off first. 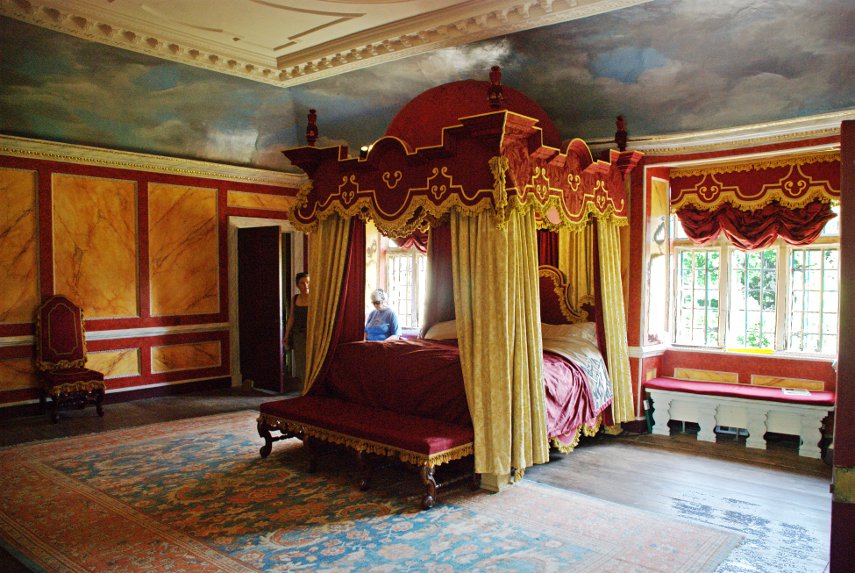 Then, of course, some of us have to start taking liberties on the Chaise Longue in the Withdrawal room. 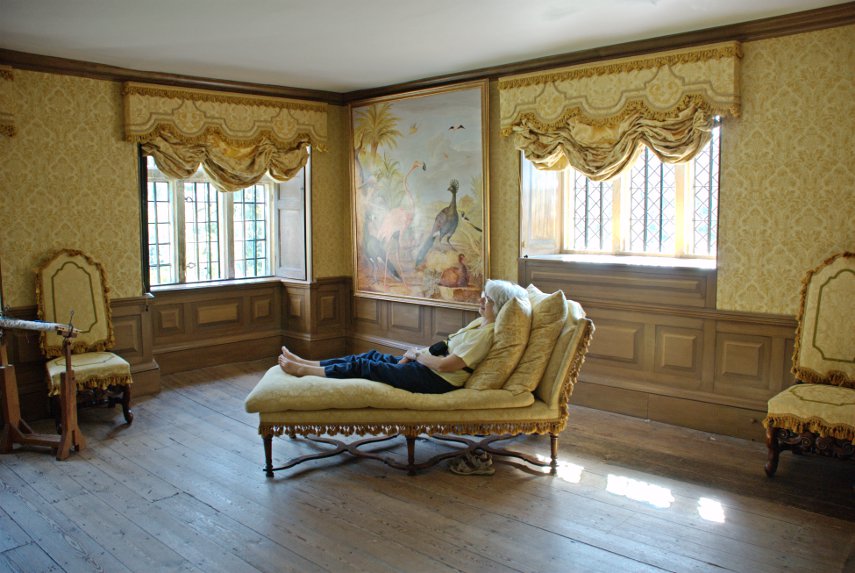 We finally decided it was time to head for our hotel in Marlborough but, on the way, as we were passing the Sanctuary we were going to stop for a look.

This is where the Ridgeway starts and heads off to Ivinghoe Beacon in the Chilterns which I wrote about in the Blog – http://localhost/deoprrssw/?p=170

This is the signpost at the start of the Ridgeway, and it's a long walk to Ivinghoe Beacon, 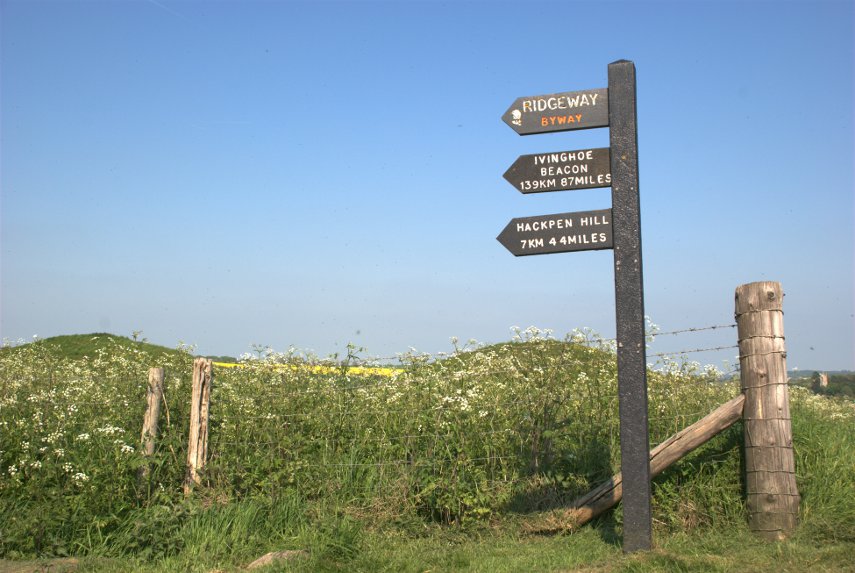 and just across the road is the Sanctuary which was begun in about 3000 BC. The the site was constructed and modified in a number of phases, with eight rings in total (six wooden post rings and two stone circles) but, sadly, it is now just a set of concrete markers. 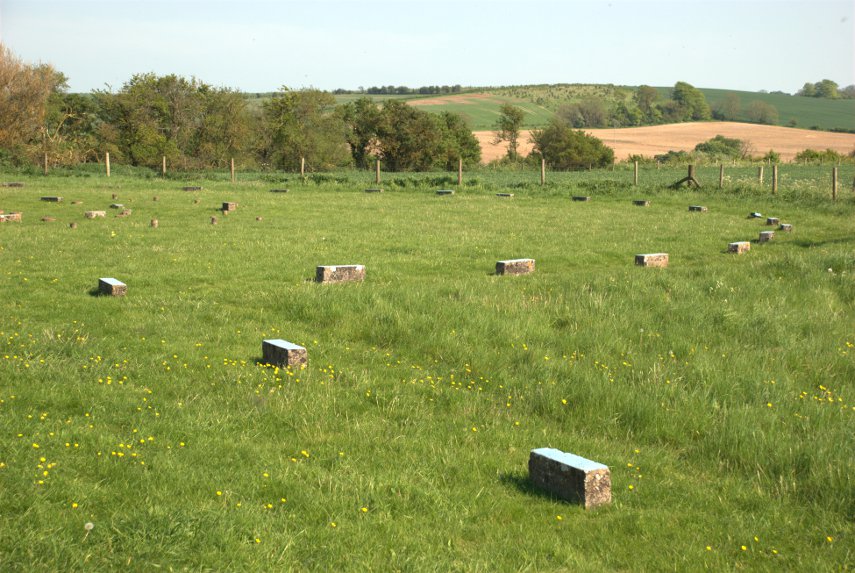 We went off to the Castle and Ball Hotel in Marlborough, where we were staying, for an evening meal and to prepare for our expedition tomorrow which features a lesser known historical monument and even more buttercups.