We were up at about 7:30 and down to breakfast just before 8:00. Amanda chose a standard cooked breakfast but I had smoked salmon and scrambled egg – yummy. Soon after breakfast we were off once again towards Avebury. We were told that the Olympic Torch was passing the hotel at about 11:00 this morning but they were going to have to do without us as we had other plans

There is a long earthwork called the Wansdyke consisting of a ditch and bank, 45 miles of it, which runs from Savernake Forest on the edge of Marlborough to somewhere near Bath. We were going to have a look at the section that passes about 3 miles south of Avebury.

There is a small car park between Knap Hill and Milk Hill which we used as the starting point of our walk. Having crossed the road from the car park we set off along the central path of three diverging public footpaths which went steadily uphill. This is the ridge we are making for and just look at all those buttercups – lovely. 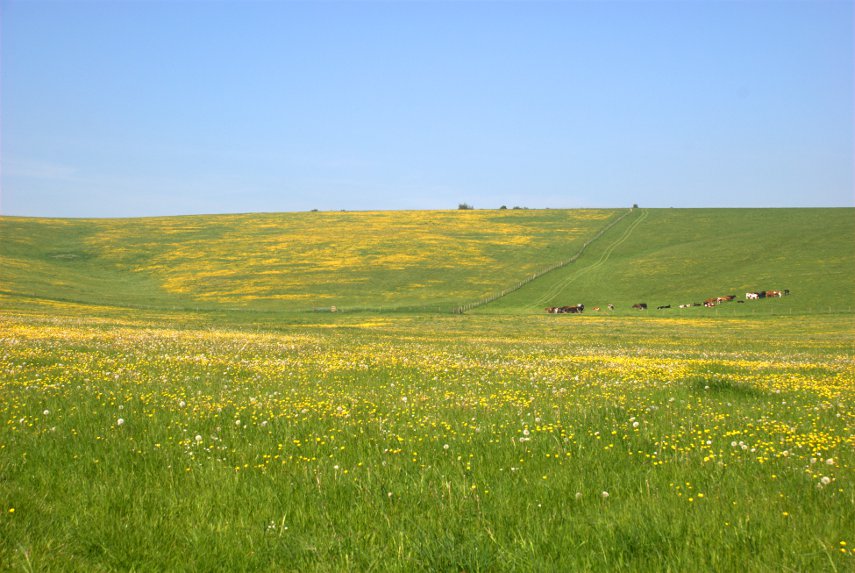 After a short distance we could look back and see the car park we'd started from (just below the horizon on the right) together with yet more buttercups. 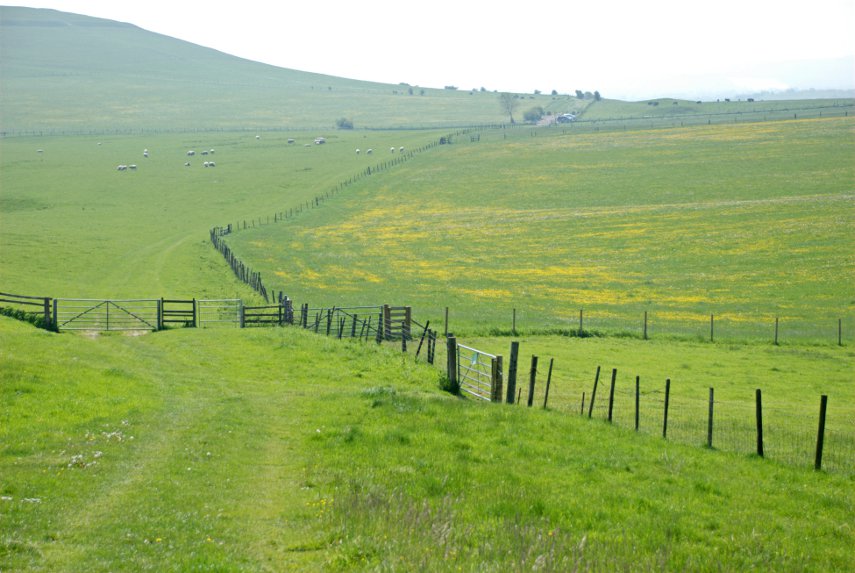 Onward. After (puff) some more (puff) uphill (puff) walking (puff, puff) we reached the Wansdyke. This is looking east towards Savernake Forest with the bank and ditch curving off to the right to a visible promentory where it bends left out of sight. 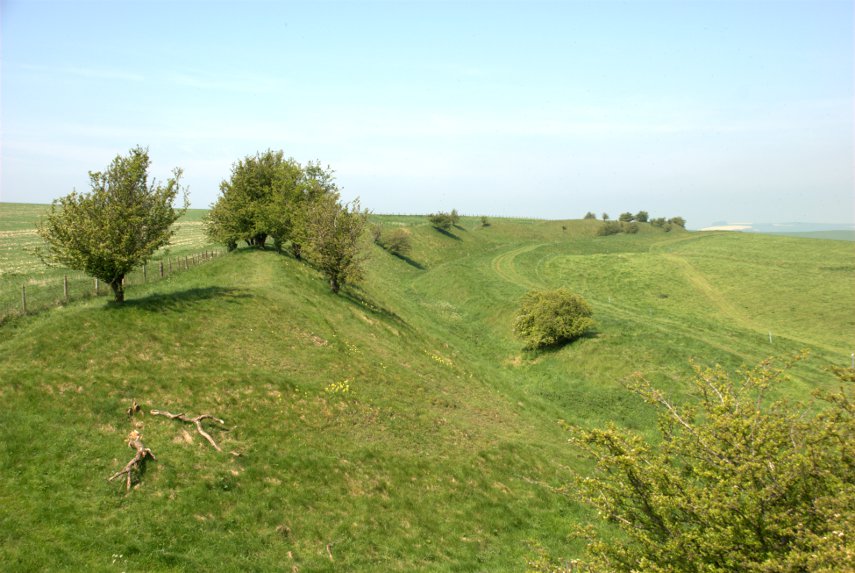 This, surprisingly, is not a pre-historic earthwork but was built around 500 AD. Now tell me why someone, using primitive tools, would want to go to all that trouble to build 45 miles of this? Why, I wonder, did they think that they needed 45 miles of defensive earthworks? This is one of the largest linear earthworks in the UK.

On the right hand flank of the bank is a small patch of yellow flowers – they are cowslips. 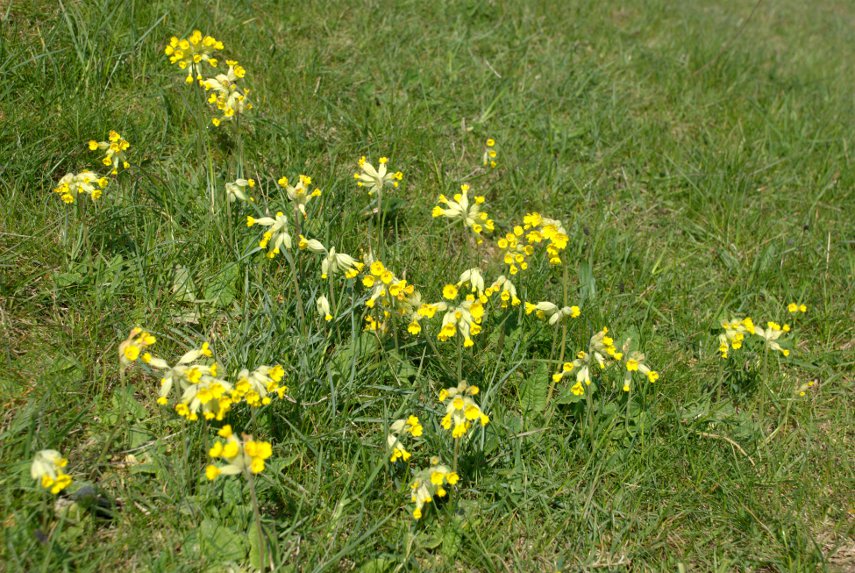 This is the Wansdyke running off into the distance in the other direction towards the west. 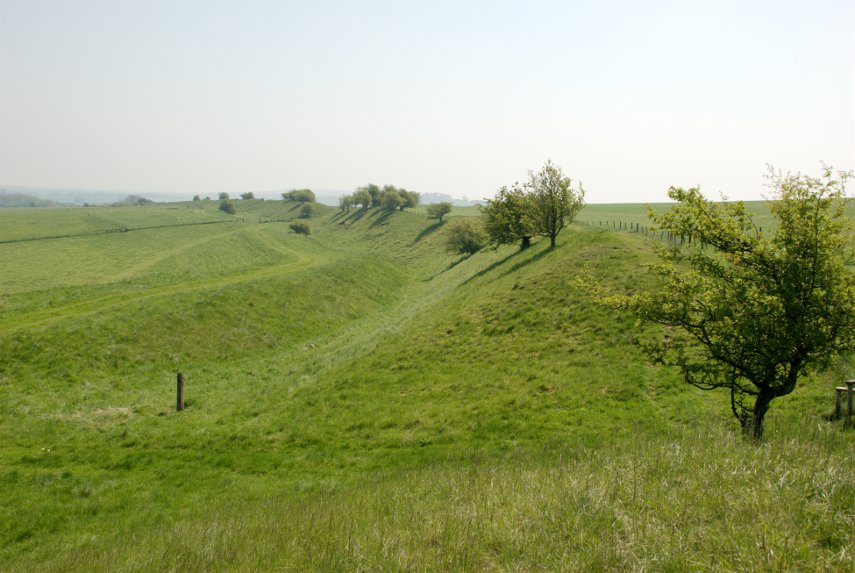 We started walking east along the Wansdyke accompanied by the songs of Skylarks and  Meadow Pipits. Meadow Pipits behave a little like Skylarks in that they flutter up high and then drop whilst singing but the song is not quite as nice as Skylarks. There was nobody else around up here and it was very quiet apart from birdsong.

We were quite high up here and I chanced to see this cow motorway down below us. 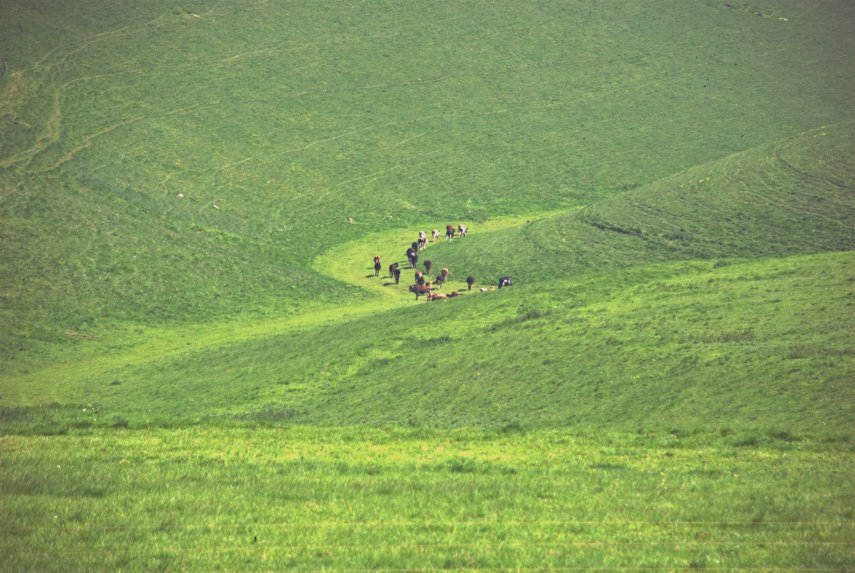 A little further along the top of the dyke I spotted these. 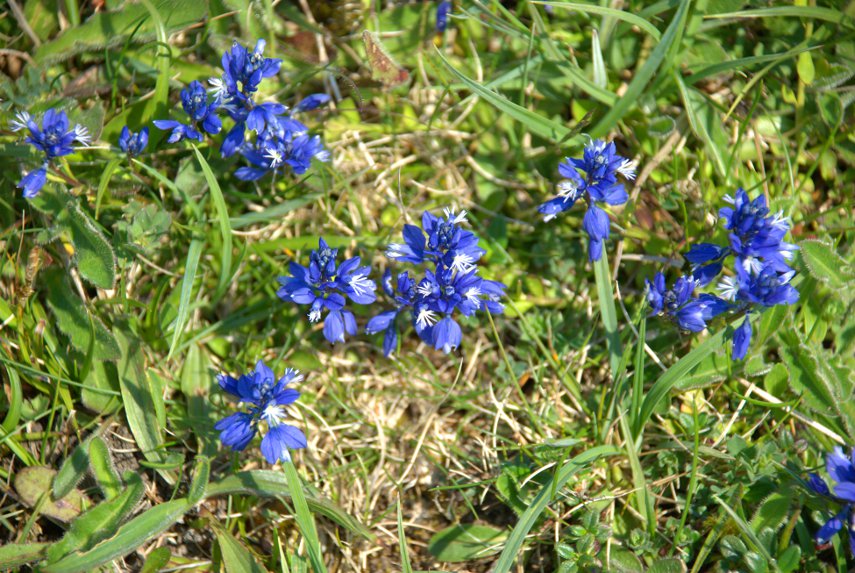 They are Chalk Milkwort and those flowers although small really are a brilliant blue and should not be confused with Speedwell which, although broadly similar, are of a much less intense blue.

We reached the point where we were leaving the dyke to go back towards the car park but we also had a good view of the Wansdyke as it wandered into the distance. Notice how it curves round to the right and finally disappears off the right edge of the picture near the top. Although it was a warm sunny day the visibility was not very good and it did look a bit murky in the distance. 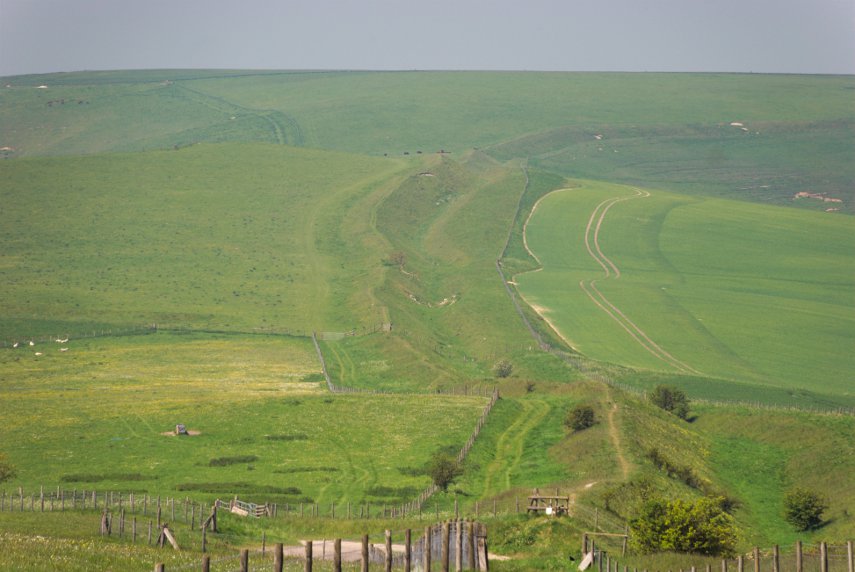 Time to clamber over the stile to get onto the new path. 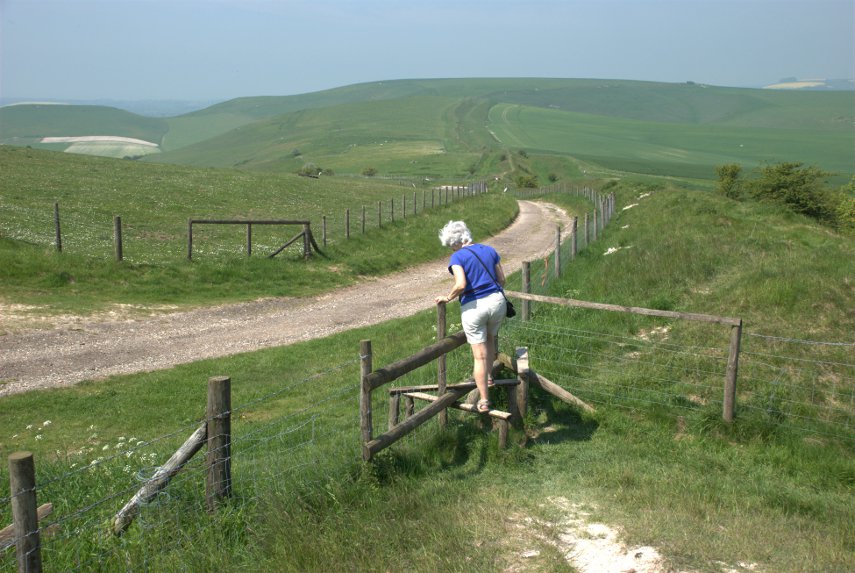 We could see from the map that the next section of path formed an 'S' and the lower part of the 'S' was a curve round the top edge of a bowl giving us a good view over the surrounding landscape. 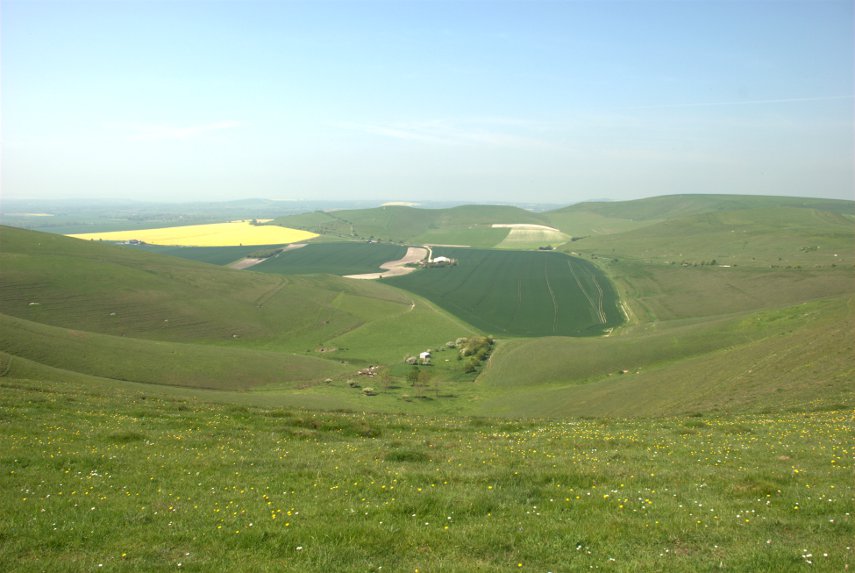 The top section of the 'S' was where the path curved round to avoid a small wooded enclosure and soon after that we came across this. 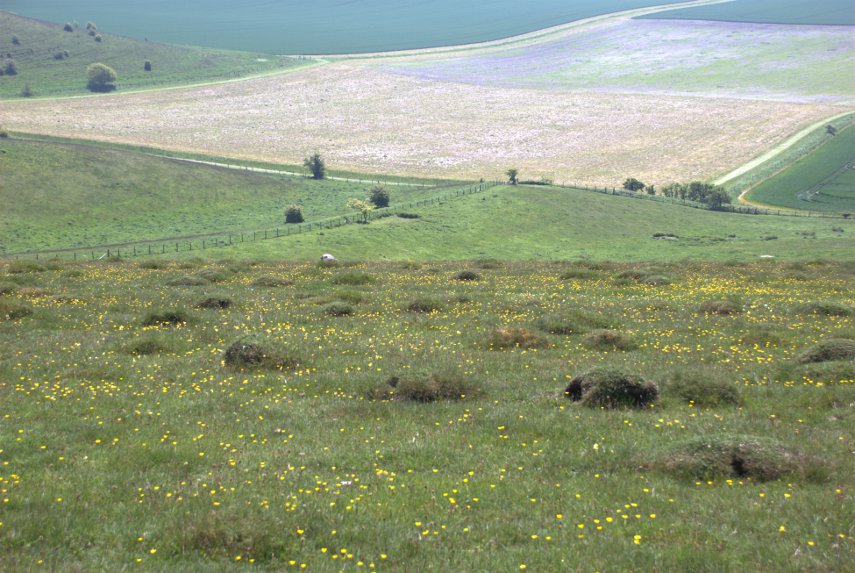 The lumpy area in the foreground is apparently known as 'ant hill grassland' and I'll let you guess how it's formed.

This next picture shows a white horse and our path, which you can see if you look carefully, crosses just above the horse then curves down to where we are now. When we passed above the horse it was easy to see the construction because it was so large but difficult to discerne the shape with any clarity because we were so close. 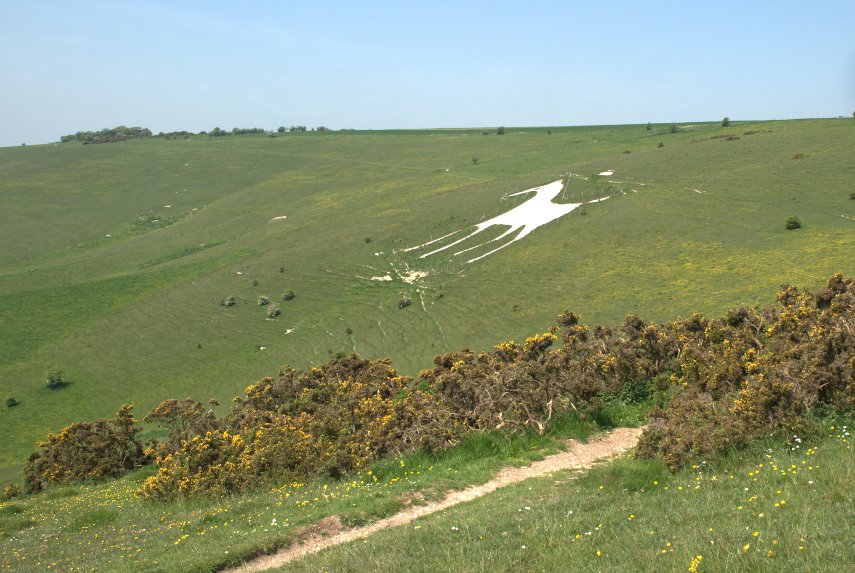 Once we were here it is easy to see the shape.

Now we are on the final leg of our walk, on a different path from the one we started out on, and you can see the path heading roughly in the direction of the car park in the distance. 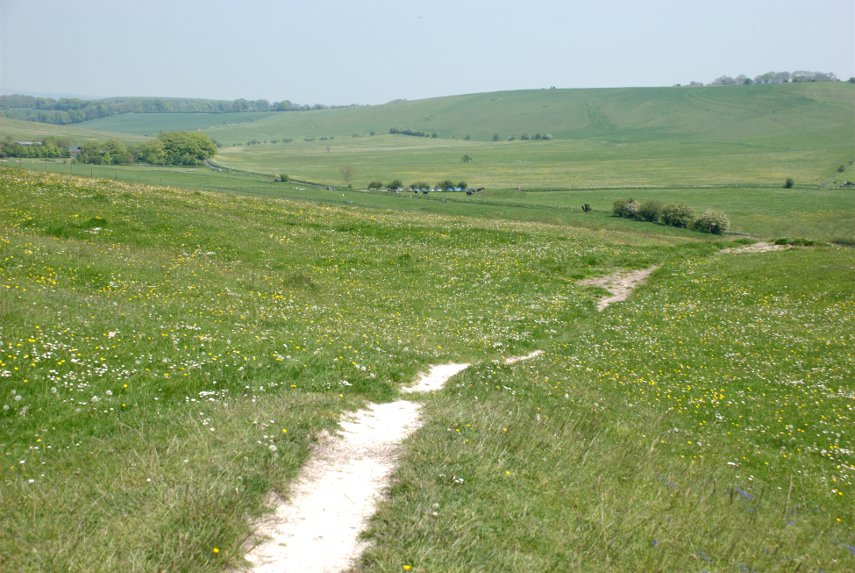 We got back to our car, which ended a really lovely walk, and headed off to our hotel – tomorrow we go home.

One thought on “Singing, singing, buttercups and daisies – Wednesday”