It is true that when we travel to London by train we use platform 1 at our local railway station but that's not the one I'm talking about. We'll get to that later.

We decided to go to London on Wednesday but we weren't going to visit any, what might be called, 'meaty' sites but ones which would require only a relatively short visit. It turned out to be interesting nonetheless and I'm pleased that you have decided to join us on this trip.

We got off our local train at Stratford, as we do sometimes, and changed onto the Picadilly underground line which is the starting point of the line at this end and, consequently, the train was virtually empty when we got on. I don't think that I have ever seen an underground train this empty. 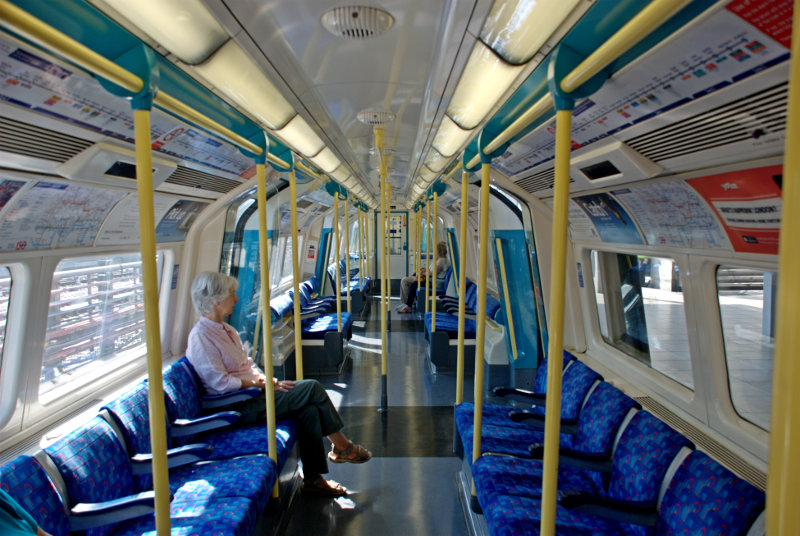 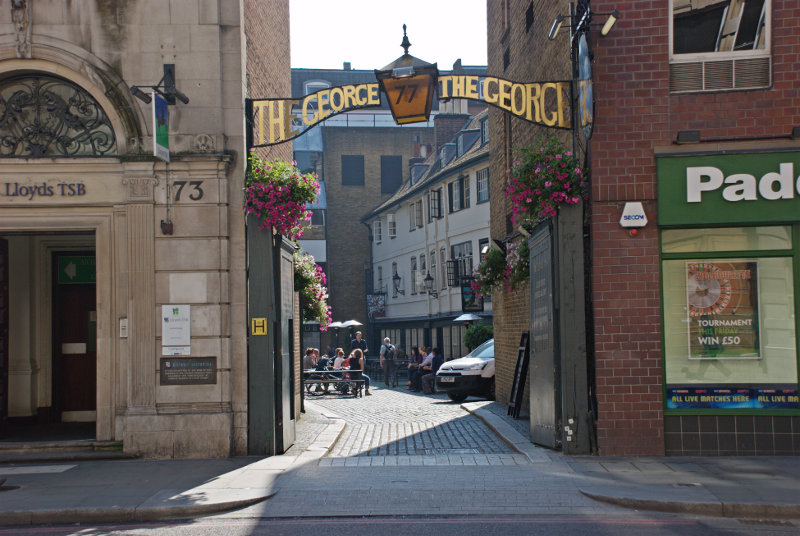 Inside the courtyard we see the only remaining original galleried pub in London dating from the 1600s. There is another 'galleried pub' in St. Catherine's Dock near Tower Hill but that is a reconstruction and not a genuine original. 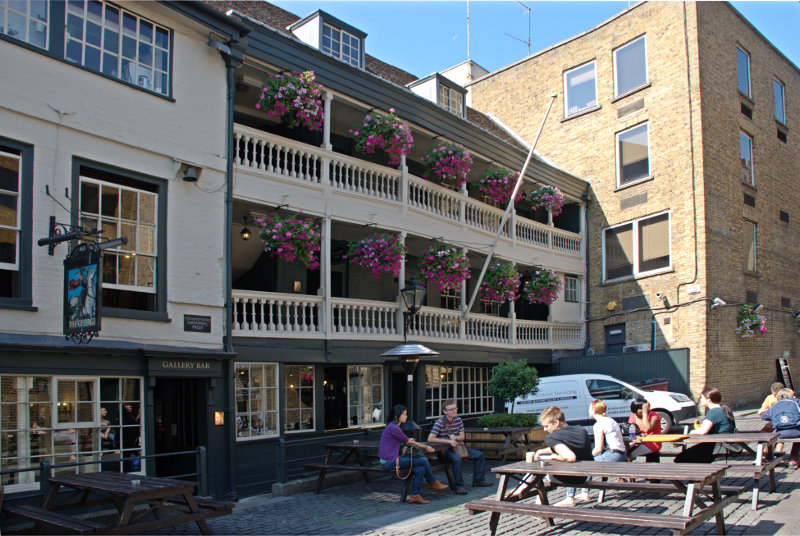 The timbers aren't very straight now are they? It is now only half the size it originally was as the Victorians demolished half of it to make way for new warehouses. Nice people!

We went back to St. Thomas Street a little past the underground station where we saw this view. 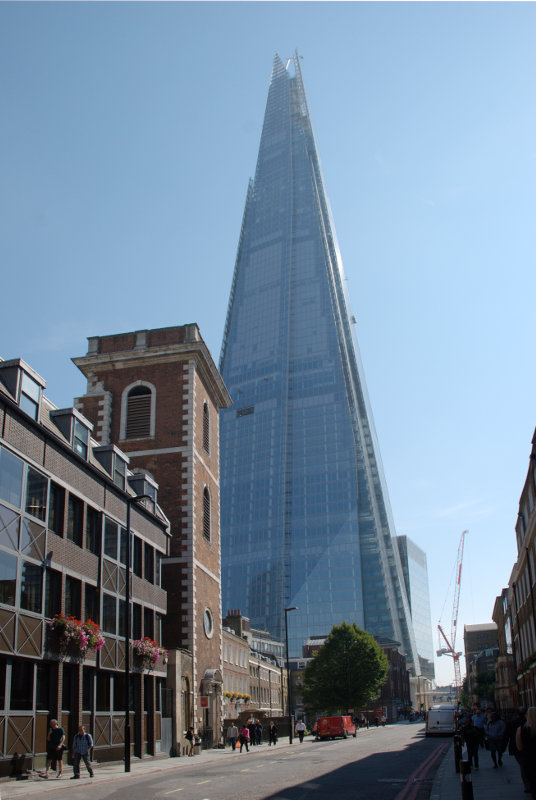 We were looking for a tower. No, no, no not that ghastly Shard thing at the back but the brick tower. Going through the doorway we see another small door over to the left which leads us up a small (very small) spiral stairway. 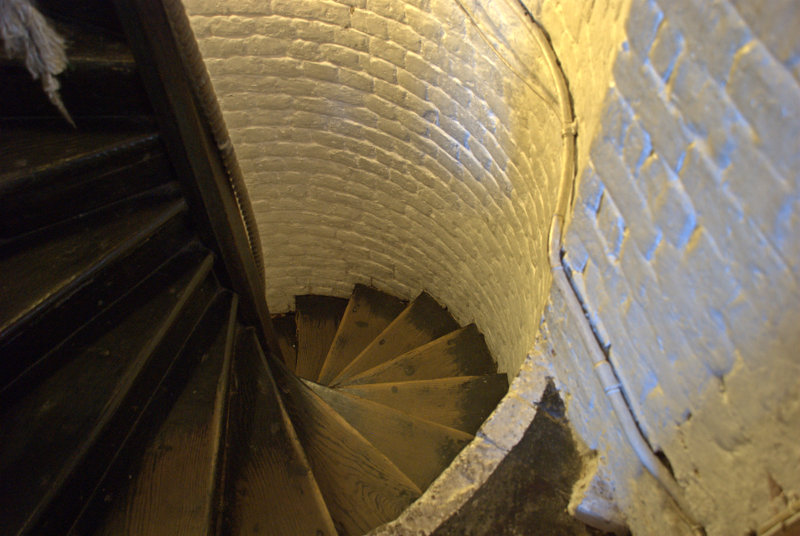 When we reach the top we are in the Old Operating Theatre and Herb Garret Museum. This was part of the old St. Thomas Hospital and is the oldest operating theatre in Europe. It is, oddly, found in the roof space of an English Baroque Church. It makes a little more sense when you realise that the wards of the old hospital were built around the church. The Operating Theatre would have been built in the first half of the 19th century when operations were still being carried out without anaesthetics. 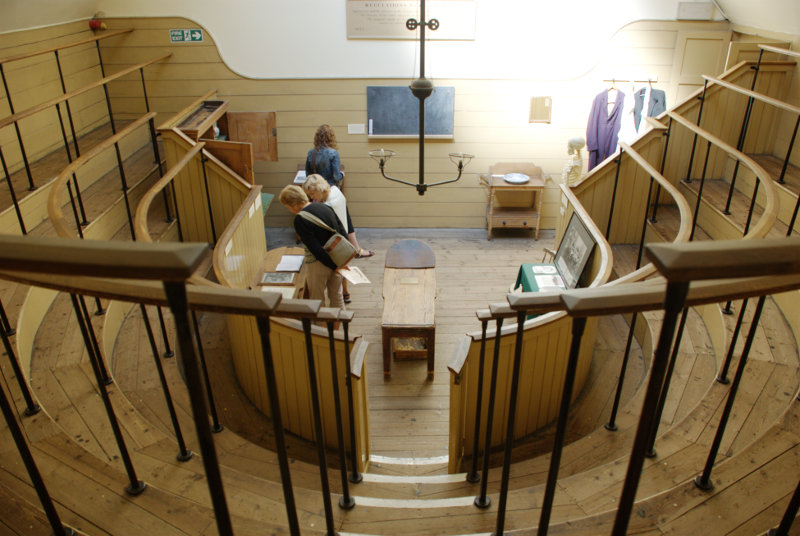 The rest of the roof space was used by the St Thomas's Apothecary to store and cure herbs which is all they had in lieu of drugs. 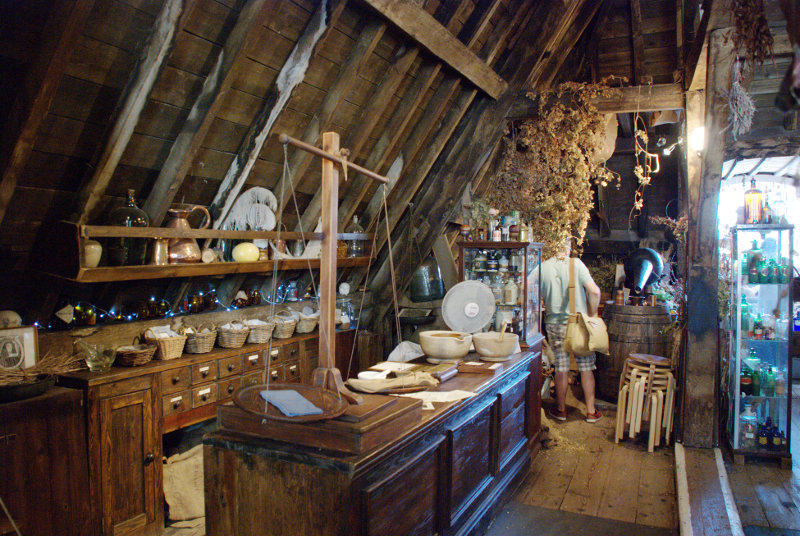 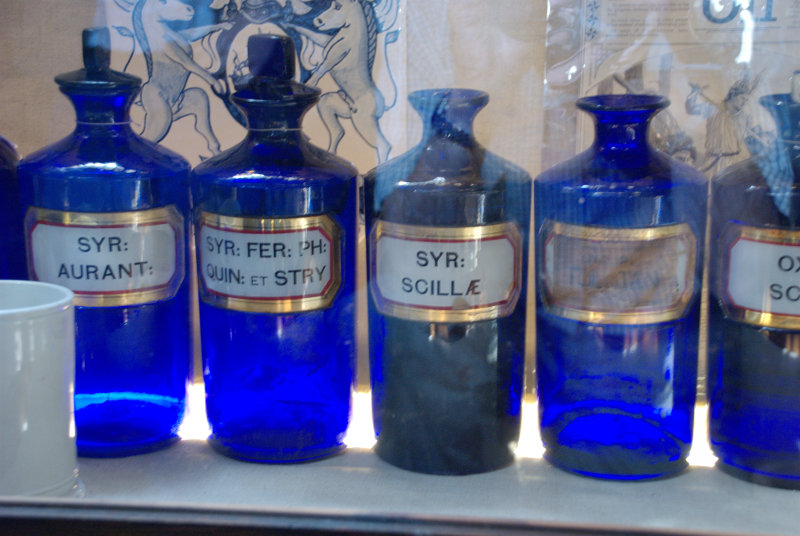 There were a lot of displays relating to medecine and surgery of old including some of the old surgical instruments.

After having had a good look round we went back to Borough High Street and crossed the road to this archway. 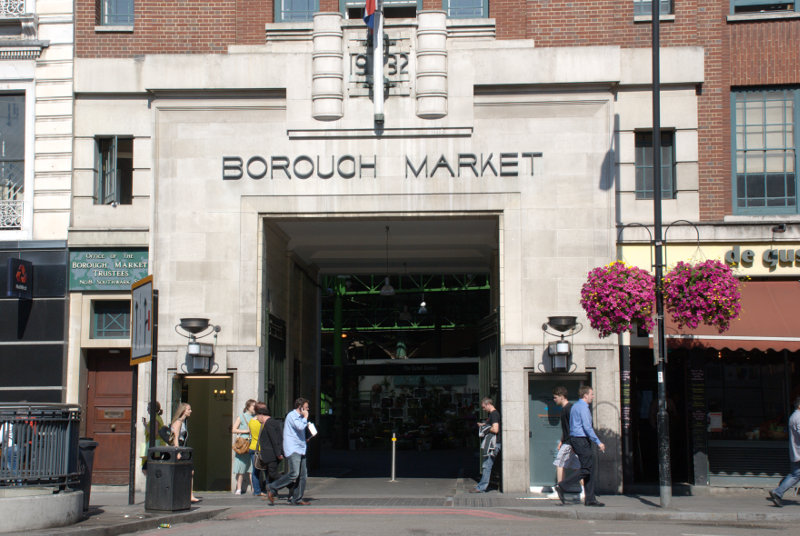 Borough Market and Southwark Cathedral are immediate neighbours. There was a small outside market when we were there and although it looks as though the stalls are up against the cathedral they are not on cathedral property. 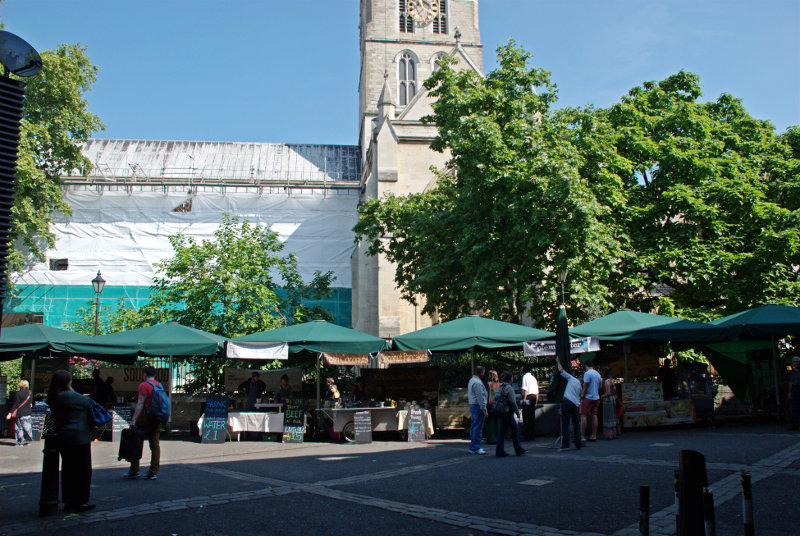 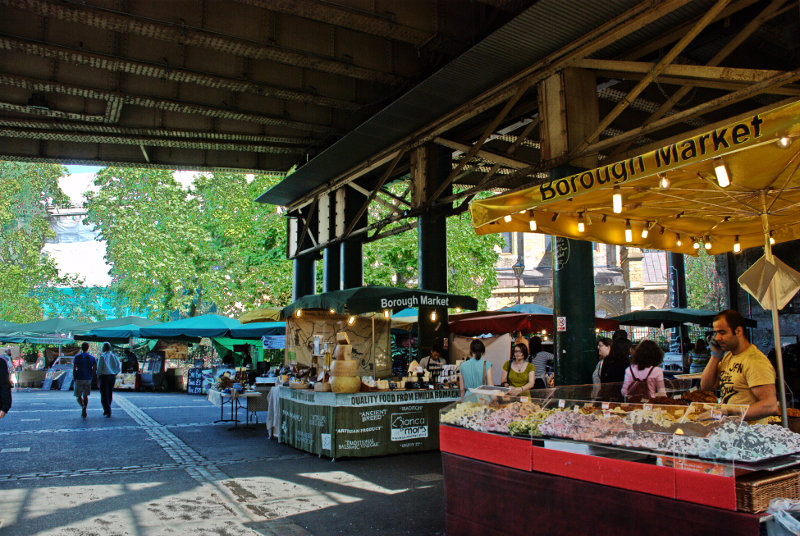 The covered part of the market is really quite spacious with lots of stalls some of which weren't open when we were there. Our only disappointment here was that it really was too early for lunch. 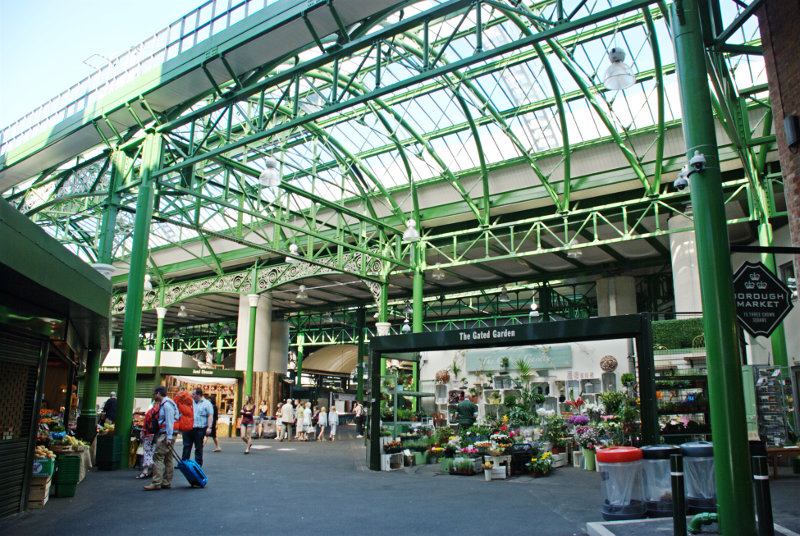 Traders in the 13th century started the market in Borough High Street although it was then closed by parliament in 1755. However a group of Southwark residents raised £6,000 to buy a patch of land known locally as The Triangle, once the churchyard of St Margaret's, and reopened the market. It has been going ever since and is renowned as a food market.

I should warn you that there are some funny people around. 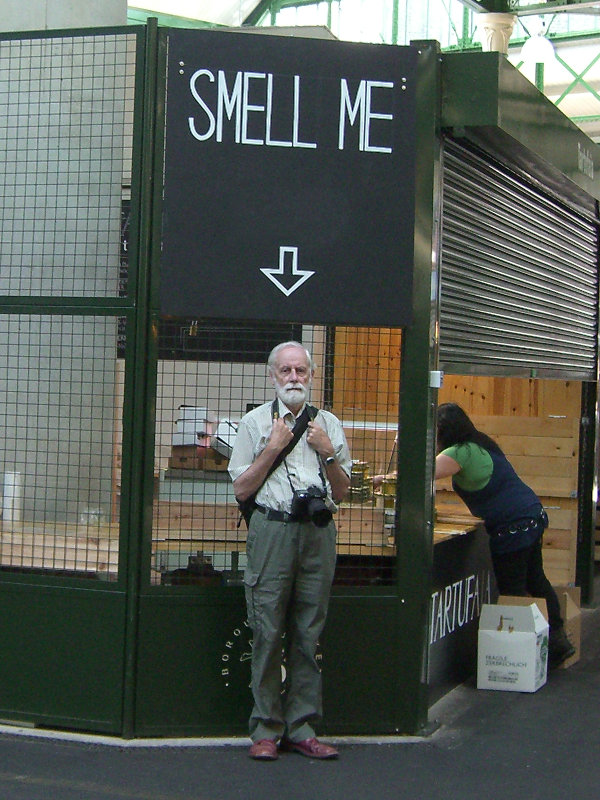 We left Borough Market going past Southwark Cathedral and along Clink Street. 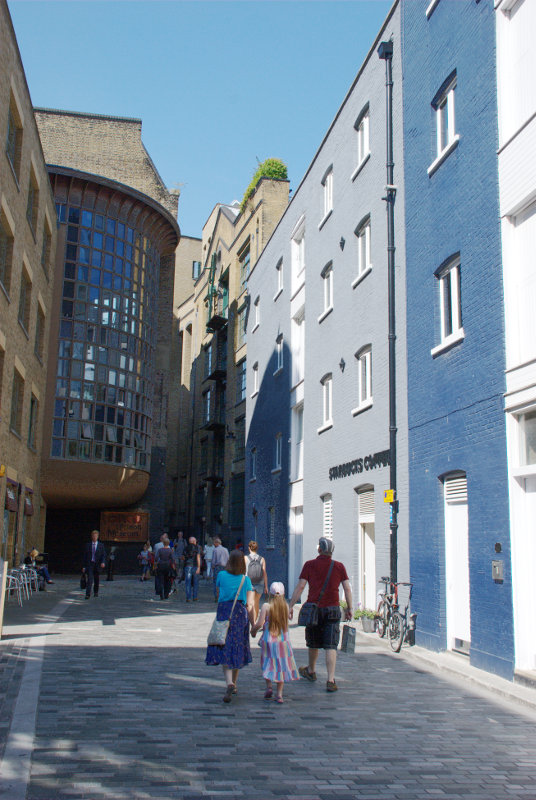 At the end of Clink Street we reached the Thames with the Golden Hinde nearby. Along the riverside past Southwark Bridge and the Millenium Bridge. 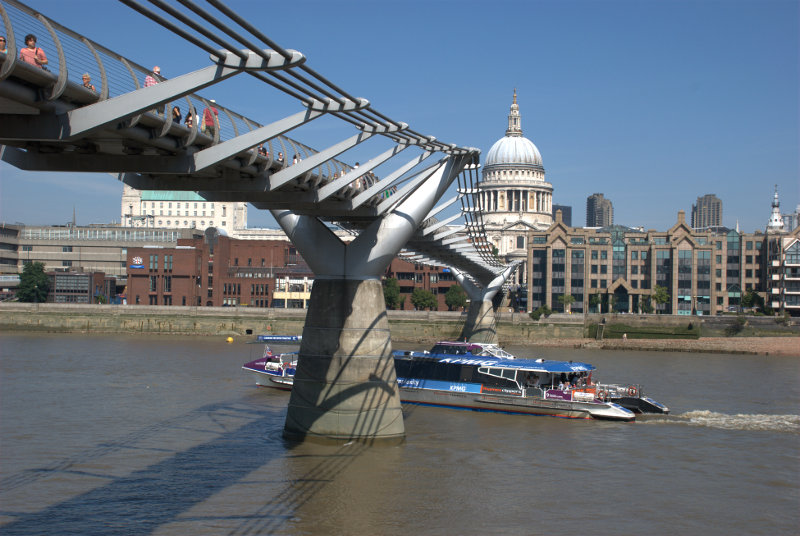 It wasn't long before we were in sight of the Blackfriars railway bridge. A few years ago it was decided that Blackfriars Station (the overground railway not the underground) needed an upgrade. The problem was that where could a new station be built in such a crowded area? The answer was, of course, that you build it across the river so that the station replaces the bridge and that is what happened. 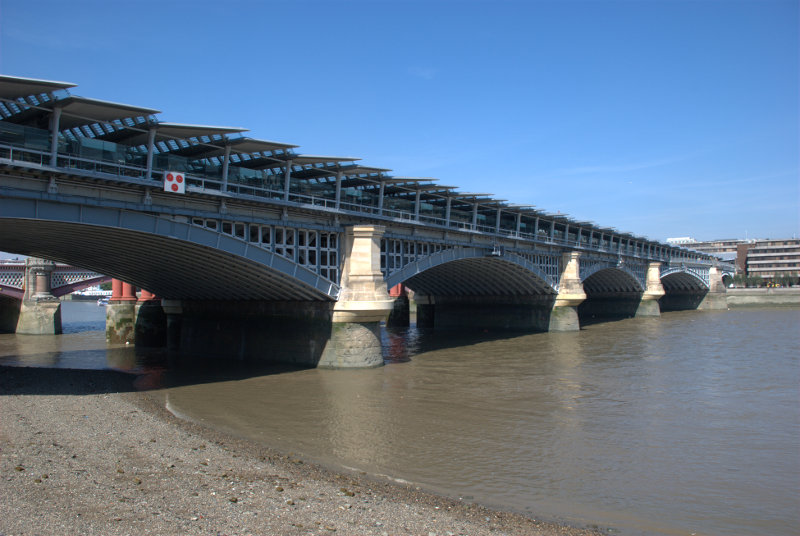 You can probably see a small part of the road bridge through the nearest arch.

As one can use the normal overground railways in London with a travel card for travelling within the London Zones our travel cards let us through the barrier and into the station. We went up the stairs onto Platform 1. 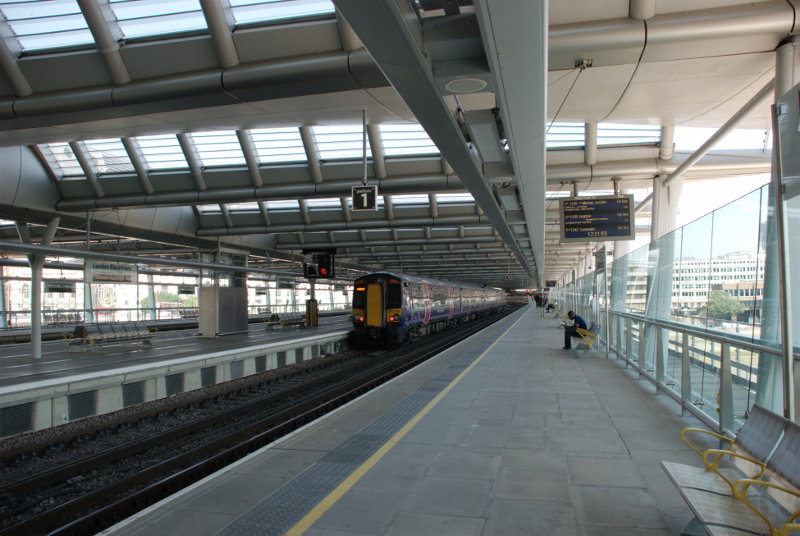 We are walking from south to north and you'll notice that the railway lines are to our left and on the right instead of the usual wall there is a glass screen. This is the view from Platform 1 looking east through that screen. 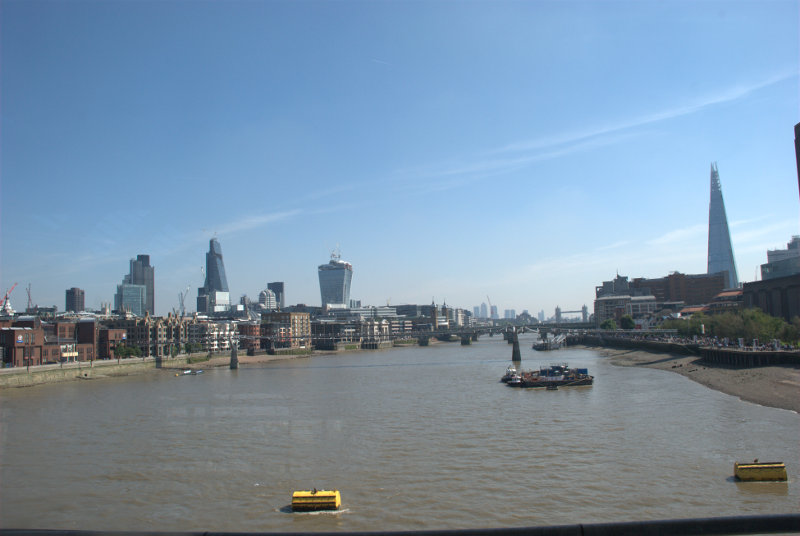 Just out of the left of the picture we could see the dome of St. Paul's together with the top part of the two towers. The nearest bridge downriver is the Millenium Bridge but, unfortunately, it does tend to merge into the background.

We went out at the north end of Platform 1 and down into the Underground where we caught a train to South Kensington.

We went into the Victoria and Albert Museum just to have lunch. Amanda didn't enjoy hers as much as she did on the previous visit but mine was nice. Whilst we were sitting at the table I took this picture of the rather ornate Gamble Room in which we were having lunch. 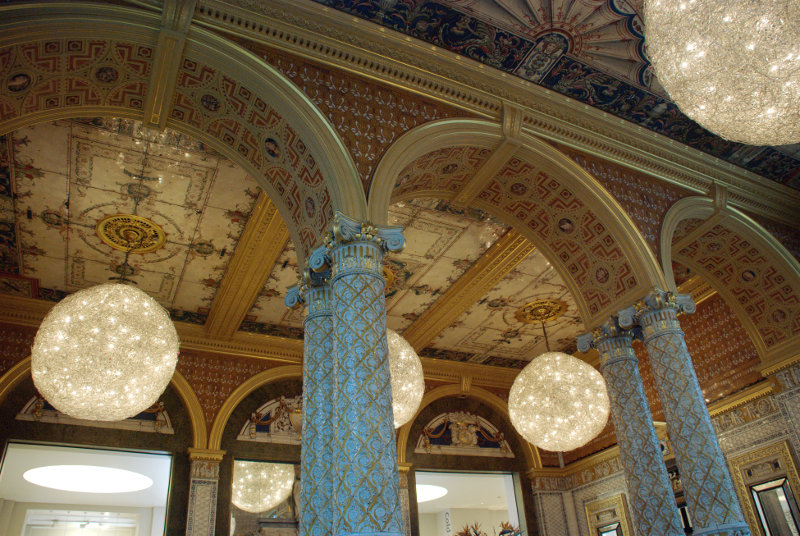 After lunch we took a short cut out via the courtyard which today seemed more like the local swimming pool except that the water is only ankle deep but the children were certainly enjoying it. 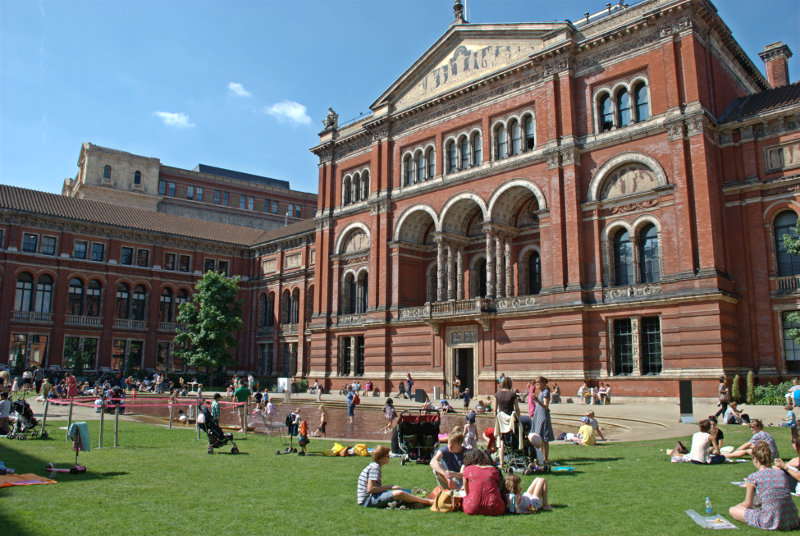 We left the museum and headed north along Exhibition Road then turned left into Prince Consort Road. It wasn't long before we caught site of our next locatioon. 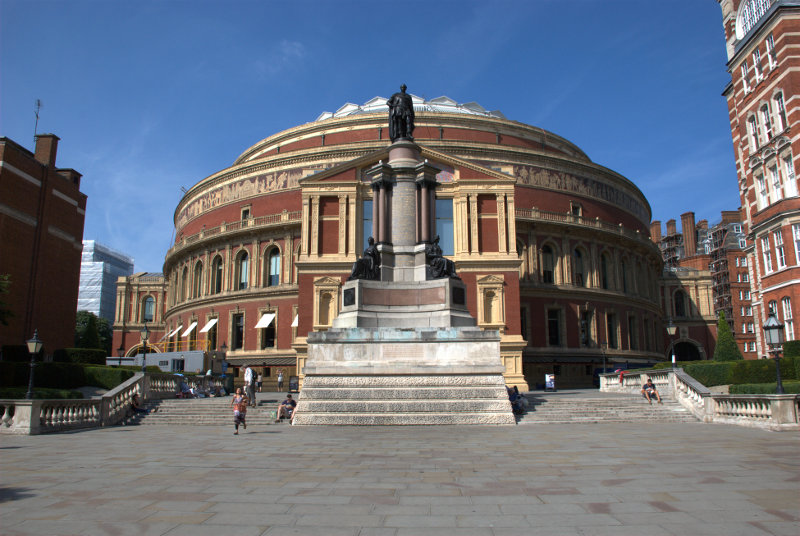 You may recognise it as the Albert Hall. Walking round one side of the building we came out opposite the Albert Memorial in Hyde Park/Kensington Gardens and I must say it was an astonishing site with all the gilding glowing in the sunlight. 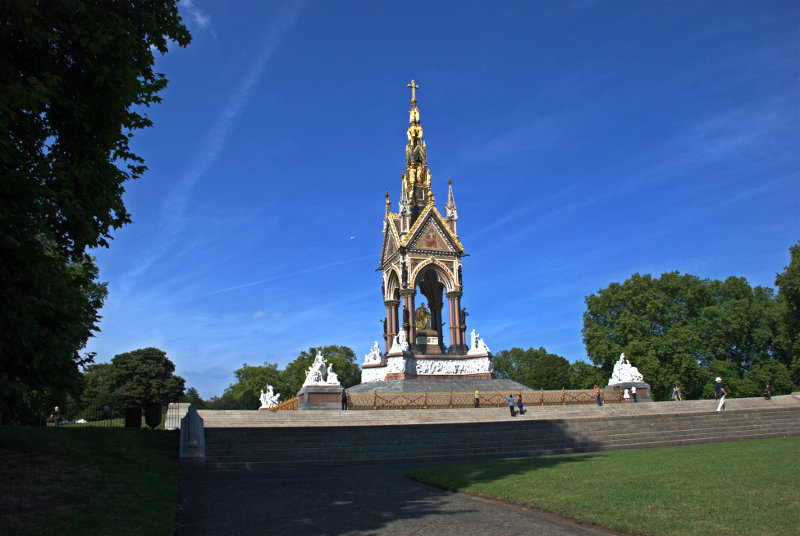 We walked across Kensington Gardens towards the Round Pond and Kensington Palace. We had no intention of going into the palace but we did have a look at this. 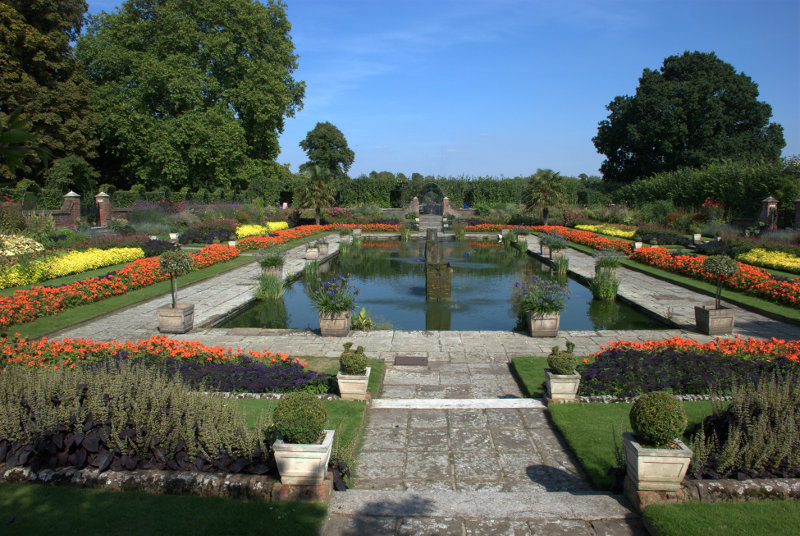 The Sunken Garden in Kensington Palace grounds. The grounds, including this garden, seem to be freely accessible.

We were about ready now to head home so we aimed for Gloucester Road underground station, being the nearest, and we went via some of the backstreets.

Kensington is the sort of place where one sees roads lined with large, grand and very expensive properties. 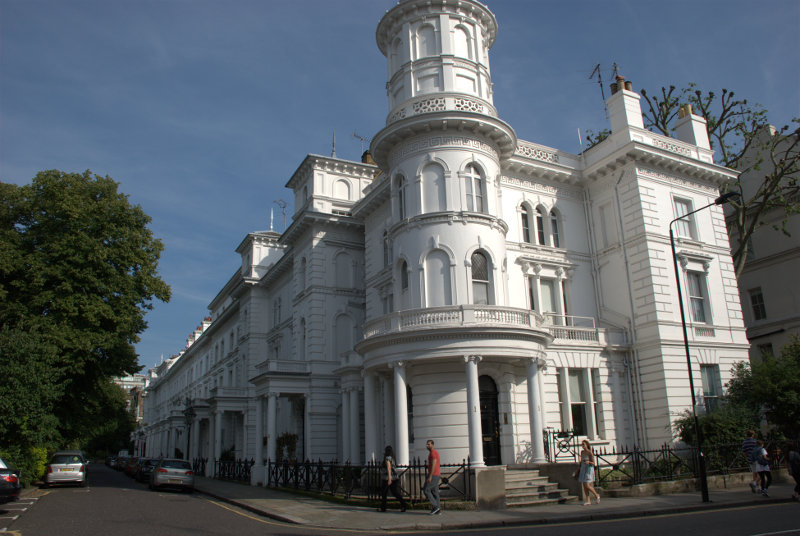 This means that, as they were built in Victorian times, there would also be some mews nearby where the coach and horse were kept together with the coachman and his family.

So it proved to be. 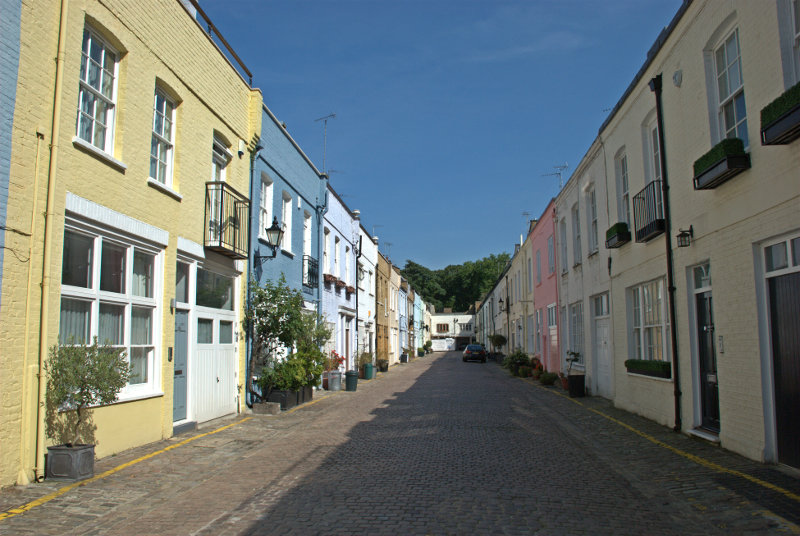 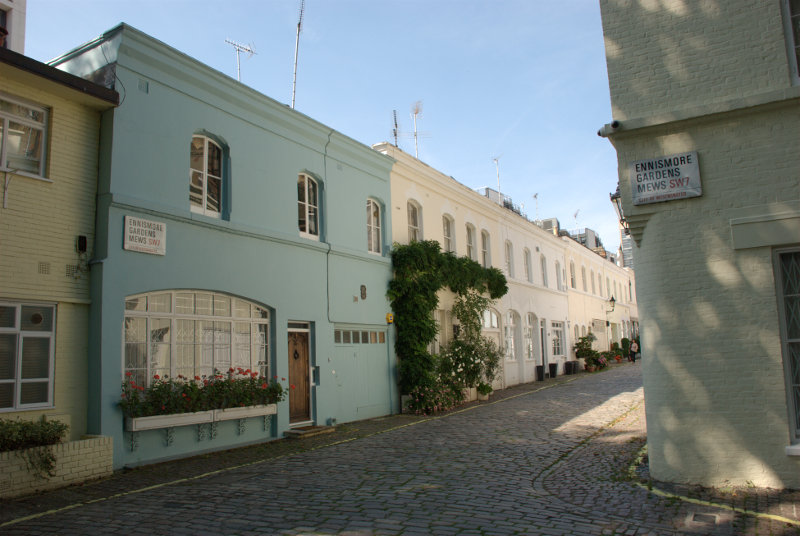 That was a few of the mews we found and we were now worn out. I hope you enjoyed your trip – we certainly did and now it's time once again to go home.

5 thoughts on “The view from Platform 1”