Today is the big day! My most ambitious day of the whole trip. I plan to get the bus to Chideock (pronounced 'Chidock') and walk back to Lyme Regis via Golden Cap. What's Golden Cap? It's the highest point on the south coast – that's what.

After breakfast I walked a couple of hundred yards to the bus stop to wait for the bus which is supposed to arrive about 9:35 which it did. Thirty minutes later I was standing by the roadside in Chideock looking for Mill Lane on the opposite side of the road. As it was close to the bus stop even I couldn't get it wrong and I was soon walking down the lane towards Seatown. 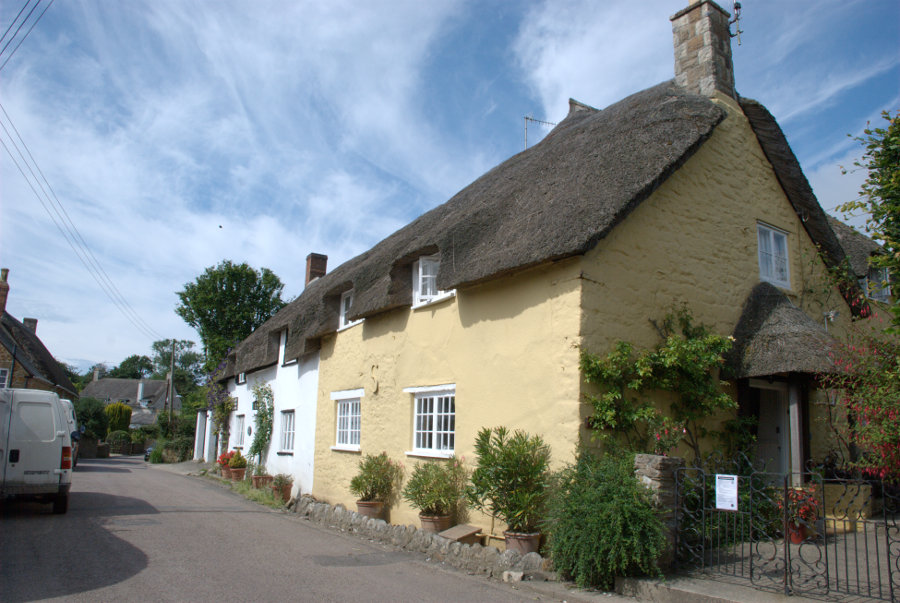 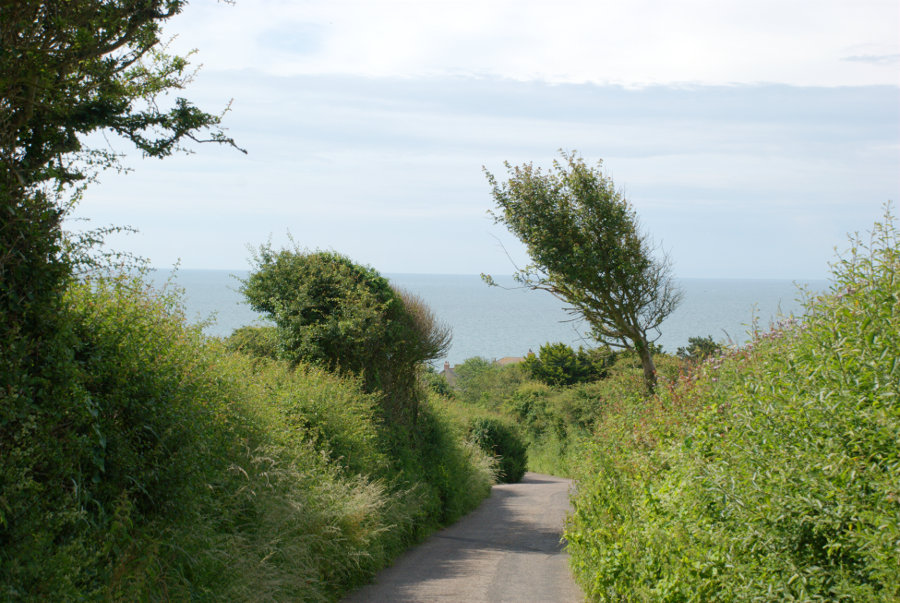 You can probably see that the sun is out but that there is plenty of cloud. It was only about three quarters of a mile to Seatown so it didn't take long to get there and I walked a little in the wrong direction so that I could get a view of Seatown. 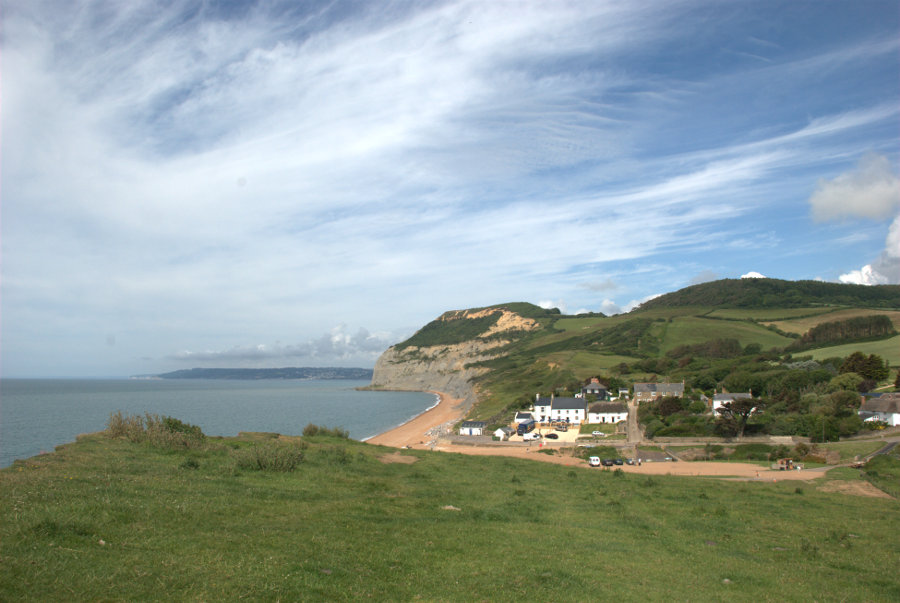 I don't know why it's called Seatown because it's not even big enough to be a village let alone a town.

This view from the beach shows Golden Cap ( the big lump in the centre of the picture) and I don't have to tell you why it's called Golden Cap do I? 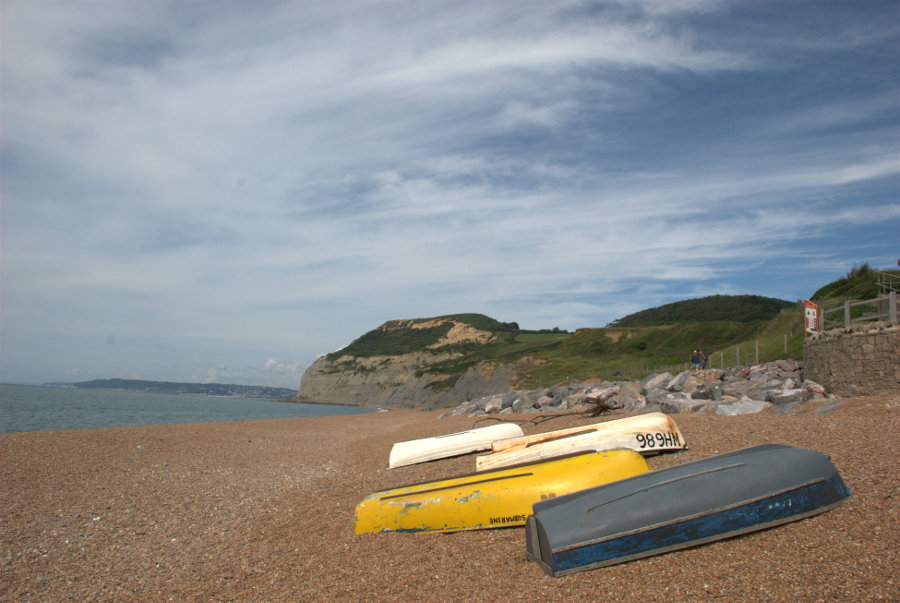 I am foolish enough to start from here, at sea level, and climb to the top of that lump and then walk on over the hill to Lyme Regis. That's the plan anyway. So I set off the short distance up Mill Lane to find the start of the footpath and here it is. 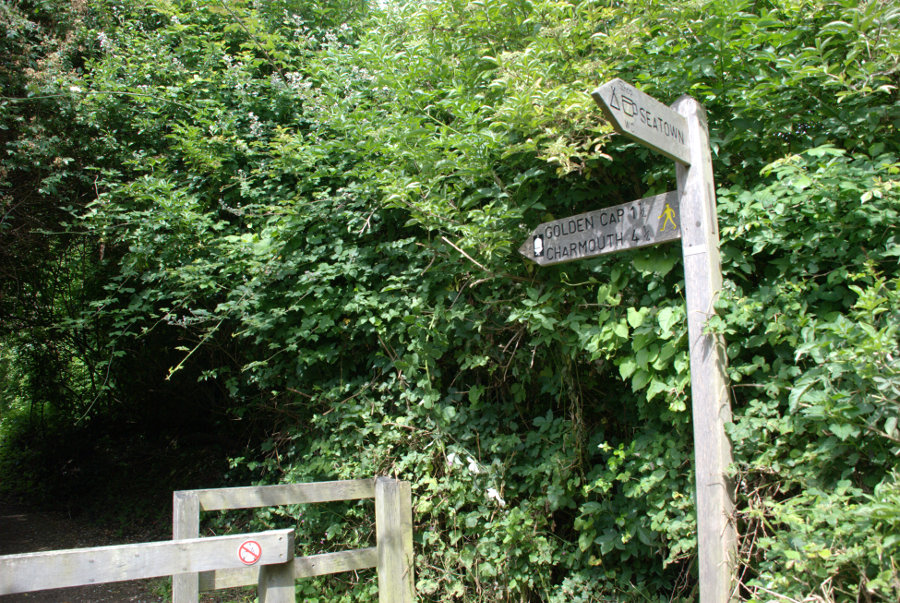 It starts off inocuously enough to lull one into a false sense of security along a gently climbing path then, when it thinks it's got you into a good mood, it starts to get steeper. The path is now steep enough that steps have been cut into it. This is done to alleviate erosion by walkers and to deliberately aggravate my old leg muscles

. The steps are cut into the ground then wooden risers are set at the front of each step to stop them collapsing. Here the steps are quite far apart so it's step up then walk a few steps and step up again. 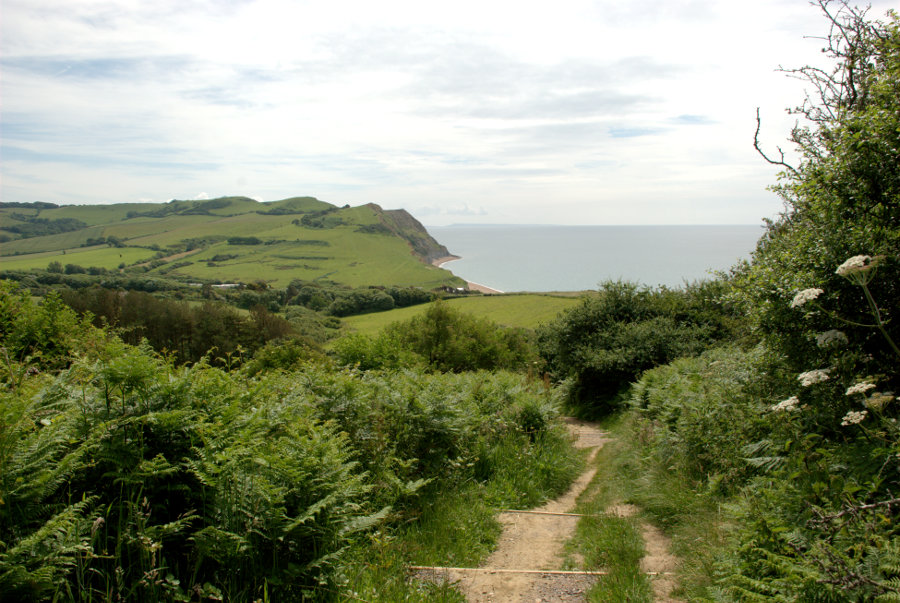 You can see a couple of steps in the photograph above and you can also see that I have gained some height since leaving the lane. 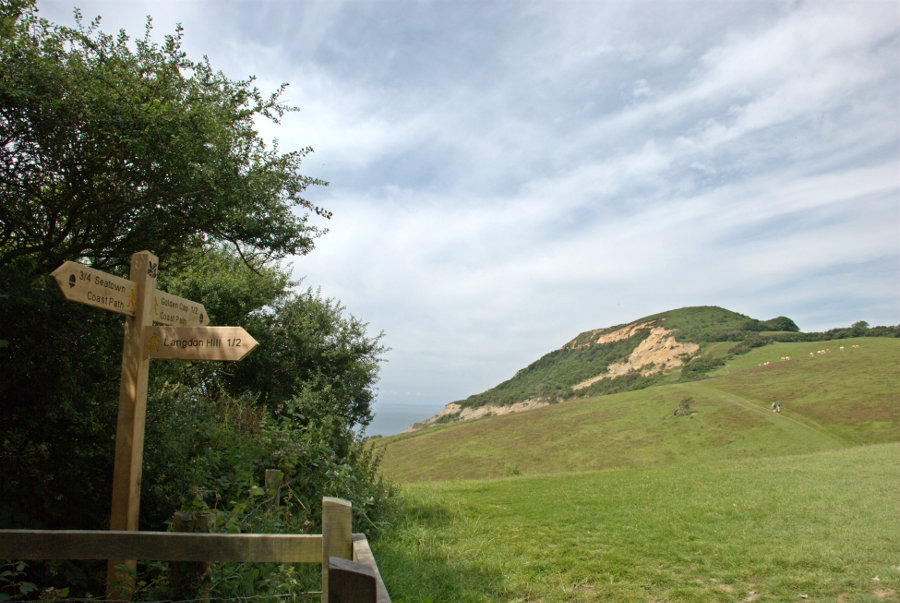 A bit higher now with the summit visible some way ahead. You may not be able to read the distances on the signpost but it says 'Seatown 3/4' and 'Golden Cap 1/2' (miles). So far I've walked 3/4 of a mile from Chideock to Seatown and another 3/4 of a mile from Seatown to this point – a total of just 1.5 miles and I'm already puffing and blowing. Still, the views are nice. 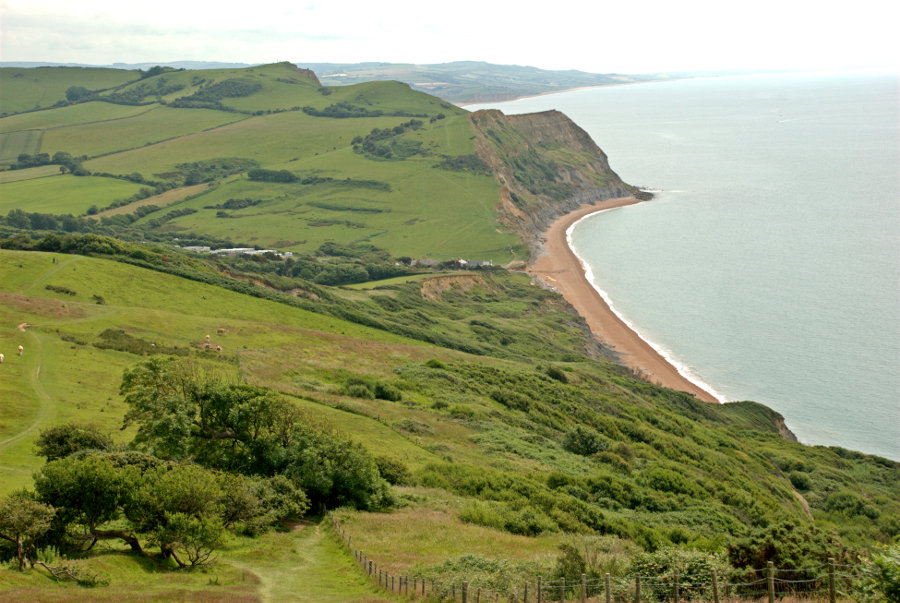 That's Seatown down there. It looks a long way down. I have still a good way to go yet and all of it steep. There are long stretches of path with lots of steps packed close together that seem to go on for ever. I finally get to a steep grassy slope with a bench seat at the top. Just what I need but I have to get there first. I didn't make it in one go and had to stop and rest part way but I did eventually make use of that seat.

Then there is another short uphill stretch, with steps, until I arrive at the summit at last. The top view below is to the east and the bottom picture is to the west. 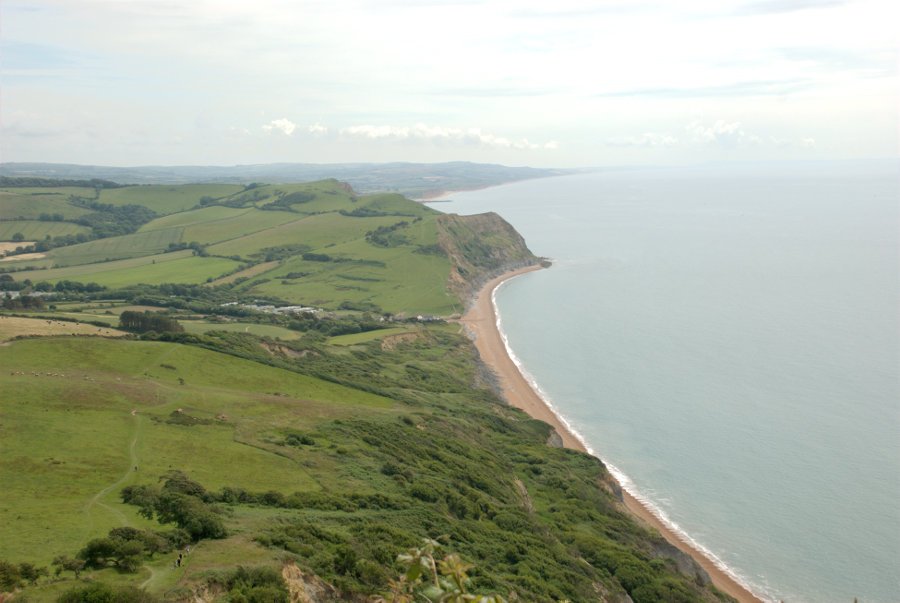 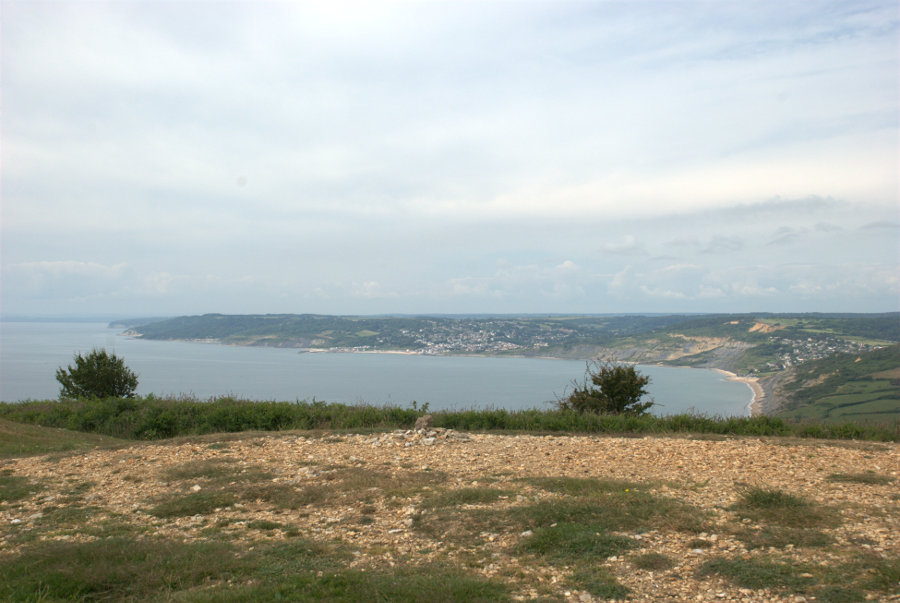 In the bottom picture Lyme Regis is the cluster of buildings in the centre of the picture with Charmouth on the right. Charmouth is my next target.

After a short sitdown to eat lunch I set off again and pass some locals who are admiring the view. 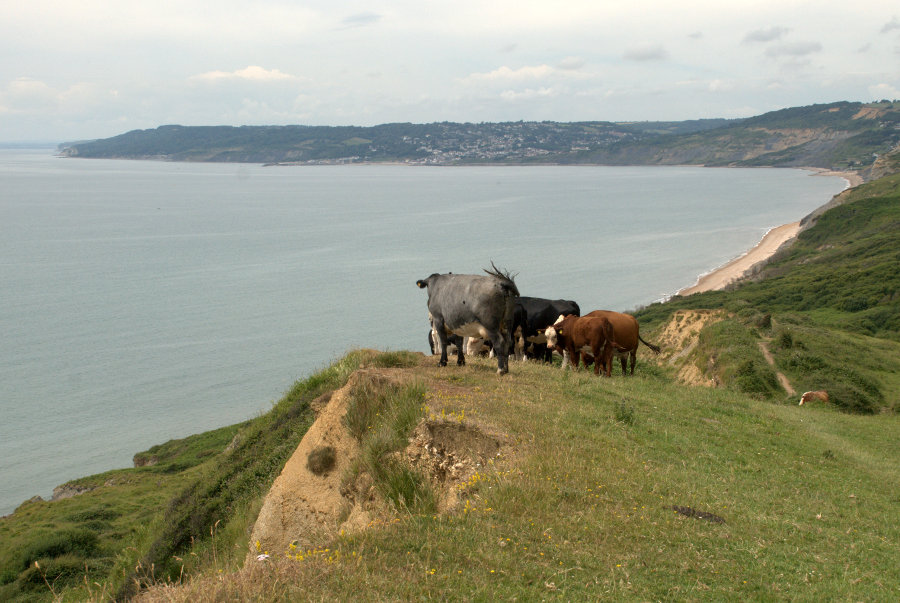 So is it now all downhill? If only! The path goes steeply down hill to the bottom of a valley and just as steeply up again to the next ridge and then down and up again ad infinitum. I am, however, slowly leaving Golden Cap behind. 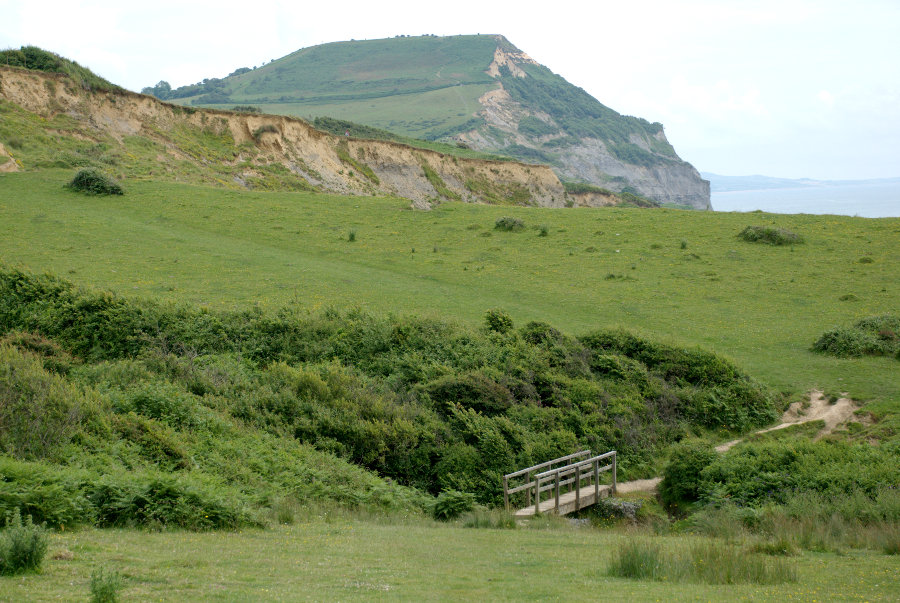 These repetitive steep slopes are making me very, very weary and I'm beginning to realise that I'll be lucky to make it to Charmouth let alone Lyme Regis so I decide I'll have to stop at Charmouth and get the bus back.

So much for ambition.

I had walked about six miles but the ups and downs would effectively double that in terms of energy used. What a wimp! Perhaps I should modify that a little. What an old wimp!

I finally reach Stonebarrow Lane and set off down towards Charmouth. 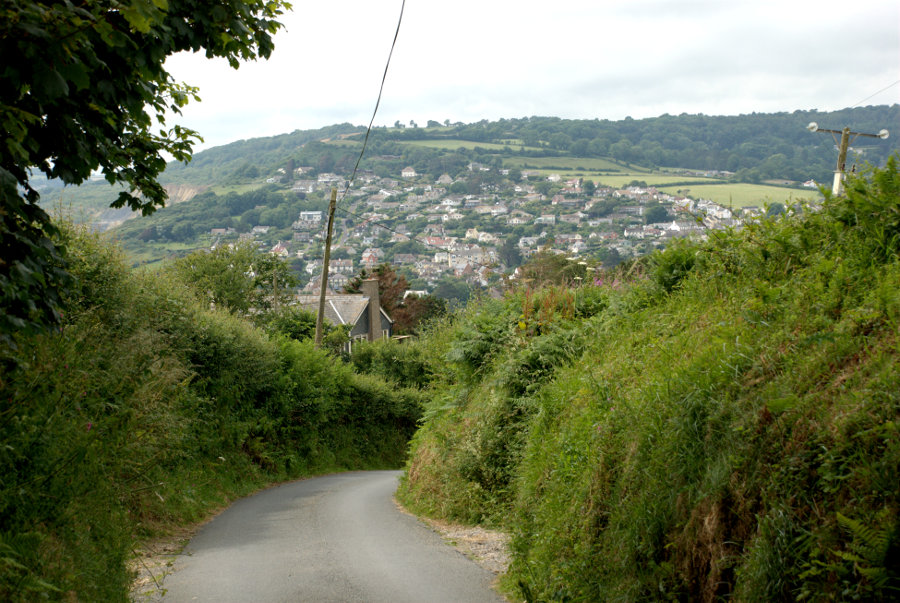 I finally reach the village but still have to walk uphill for some distance to reach the bus stop where I took this photograph looking back to where I'd come from. 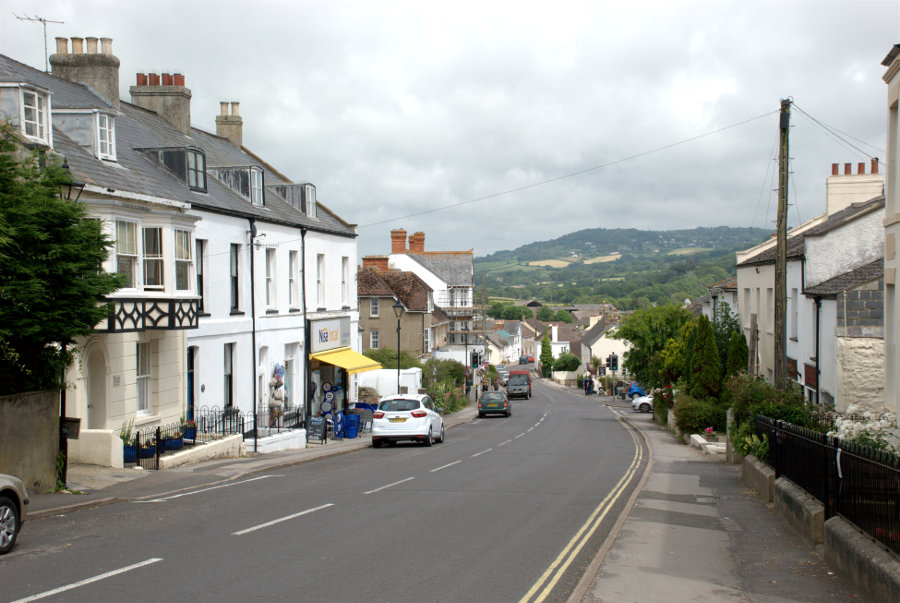 I clambered wearily onto the bus and finally arrived back at my hotel for a rest. I'm going to need that rest for tomorrow.