Yesterday, Sunday 22nd July, I left home at 9:30 AM and drove to Thaxted where I had arranged to meet Antonello from Florence in Italy. He had been staying in Thaxted for 3 nights, having already been to Rye in Sussex, and was moving on to Long Melford in Suffolk to stay there for 3 nights before travelling up to Northumberland.

This was the first time that we had met and probably won't be the last as he comes over to Britain 2 to 3 times each year. I was going to drive him to Long Melford with a few stops on the way and we were going to make a day of it.

He was sitting outside Thaxted Guildhall in the sun when I arrived and I recognised him because I'd seen a picture of him on the web.

We weren't going straight to Long Melford and Antonello suggested Kersey so Kersey it was. We found our way through the back roads with a few stops to look at the map and, no, we weren't lost!

We stopped in the main street, 'The Street', as there isn't anywhere else. You cannot really 'walk round' Kersey as there are no other streets – it's a small village. It is really picturesque with the village running down each side of the small valley to the stream at the bottom which runs across the road to form a ford. 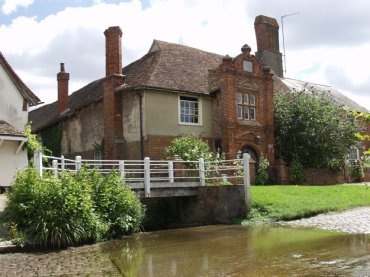 The church, quite a big one for such a small village, is perched on the valley top on one side of the village. There are plenty of pictures of Kersey already on the site.

After looking around, sorry, along Kersey we moved on to Lavenham. There are also pictures of Lavenham on the web site.

As the car park is near the church we started with the church then walked down Church Street into High Street and up to Market Lane on the corner of which is an old house where the gable end leans out in a most alarming way. Up Market Lane into The Square where we couldn't possibly miss The Guildhall and Little Hall.

We stopped for a light lunch in 'Sweetmeats' in Water Street after which we went on to Long Melford.

We first had to find Antonello's B&B and so asked a local, there seemed to be very few about on a Sunday, who didn't know where the road was. Nothing for it but to resort to technology! Out came the GPS navigation thingy and after entering the name of the village and road it gave us a street map with the relevant street shown – hooray!

After Antonello had put his luggage inside we went for a walk around Long Melford including the rather impressive church on the hill and Melford Hall (Tudor).

After this it was time for me to head back home so we said our goodbyes with the expectation that we would meet again. I certainly hope that we do. Antonello is a very pleasant young man and we both have a strong interest in Britain's heritage. Antonello took a couple of pictures of the two of us and has promised to let me have copies which I shall then post here.