Yesterday was a bright sunny day, although a bit windy, so we decided to go to Heybridge Basin near Maldon and walk along the river wall. Having parked the car we walked the short distance along the Chelmsford and Blackwater Navigation (canal) to the Lock Tearooms where we had cups of coffee before we started our walk. This little tearoom provides good food albeit with a limited choice. 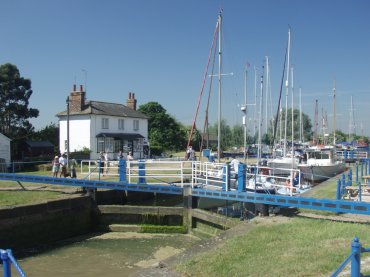 to be able to continue along the river wall. The stiff breeze, now that we were in the open on top of the river wall, turned into a strong wind although it wasn’t really cold. There were plenty of ducks and wading birds about – some walking across the exposed mud (it was low tide) and some gathered in small groups and some in large flocks on the mud banks out in the river.

Some were too far away, even with binoculars, for us to identify but we did see Curlew, Wigeon, Teal and Knot . I took this picture of Maldon on the other side of the river and the line of white birds on the water’s edge included Avocets and Shelduck. I have included a link to this photograph because it’s too large a picture to be included on the page. Picure link

Having walked nearly to Heybridge we changed tack, headed across to the canal and over the bridge onto the towpath on the other side. It was then just a matter of following the path, past a few people fishing and back to the car. A nice walk and a bit of exercise on a sunny December day.