This is where it all started: 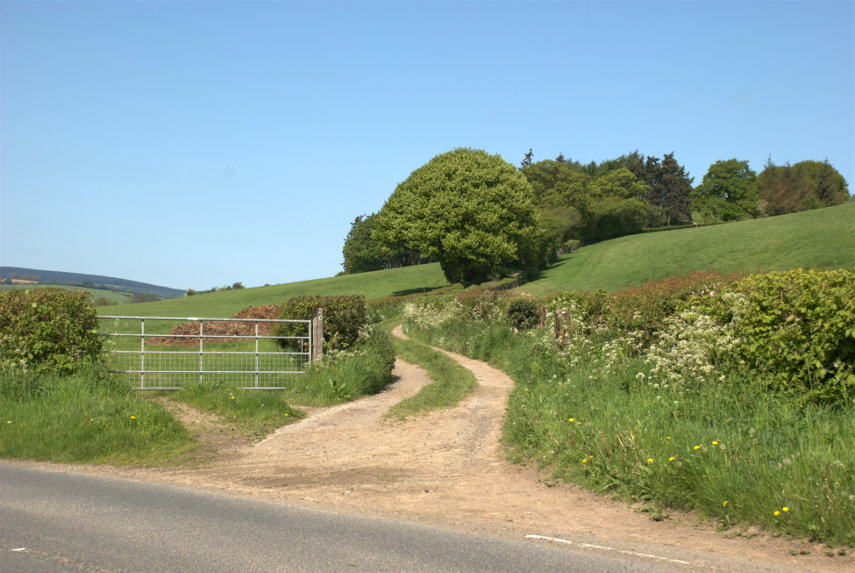 It looks pretty inocuous doesn't it? The start of a path in a little place called Dolley Green. This is part of Offa's Dyke Path where it passes through Dolley Green on its way to Knighton. From here to Knighton is 5 miles which is what I'll be walking having been dropped off by Amanda.

I watched our car disappear into the distance and started up the path. The only sounds were those of the birds and along each side of the path were Red Campion (red), Bluebells (blue) and Greater Stitchwort (white) – lovely!

I new that I'd be going over some significant hills so the fact that the path angled gently upwards wasn't a surprise and the highest point was some way away so I wasn't expecting anything steep. The path was lined with trees so that I couldn't see any of the surrounding landscape until I came out into the open. 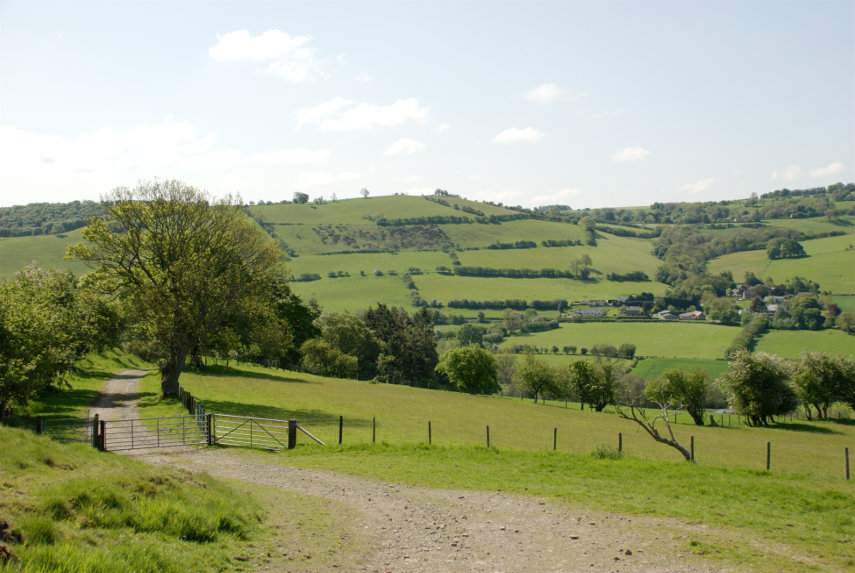 That small group of buildings to the right is where I started; not a big place. I still couldn't see anything ahead because of the rising ground until I came to the brow of the hill. 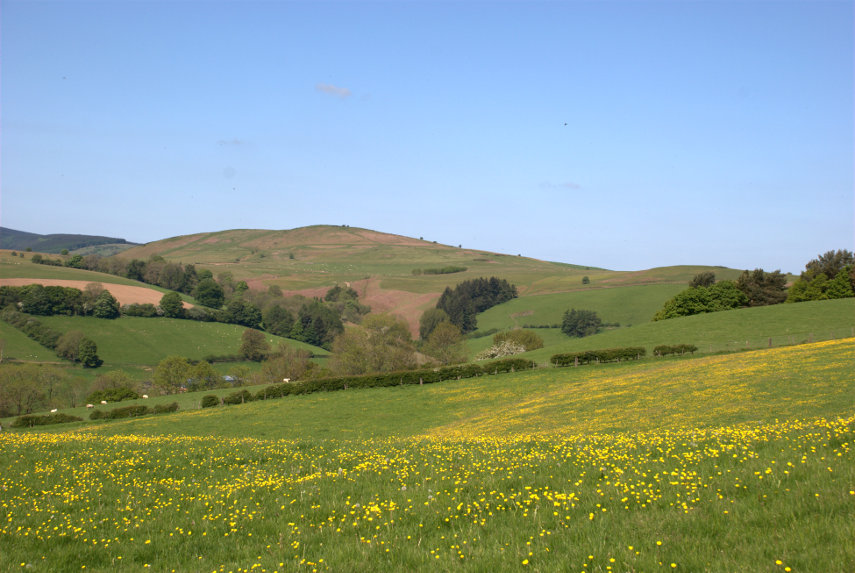 Now that isn't a bad view and look at all those buttercups. Then the path became a little steeper. I expected to see a lot of sheep and I wasn't disappointed. This one was curious enough to come and get a good look at me. 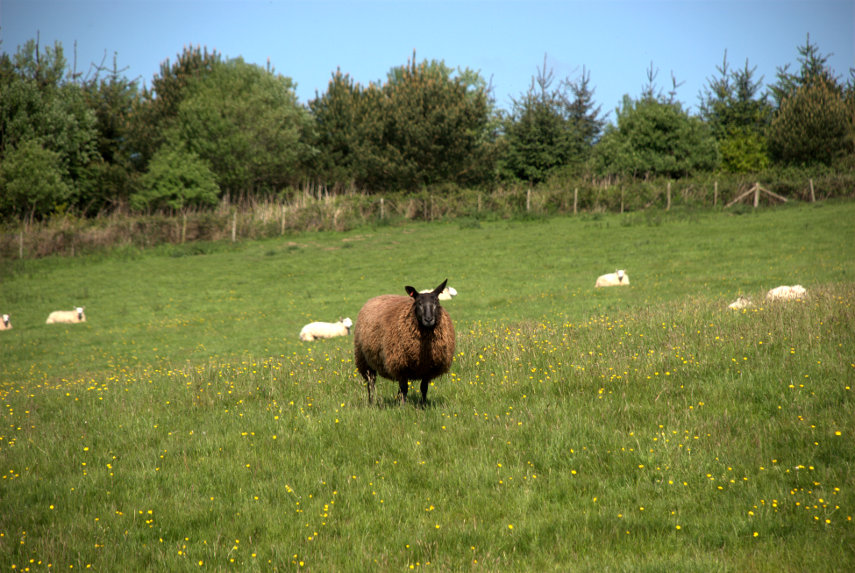 It didn't come very near and eventually decided that I was decidedly boring and moved away so I moved on too. A little further on I stopped to look back. 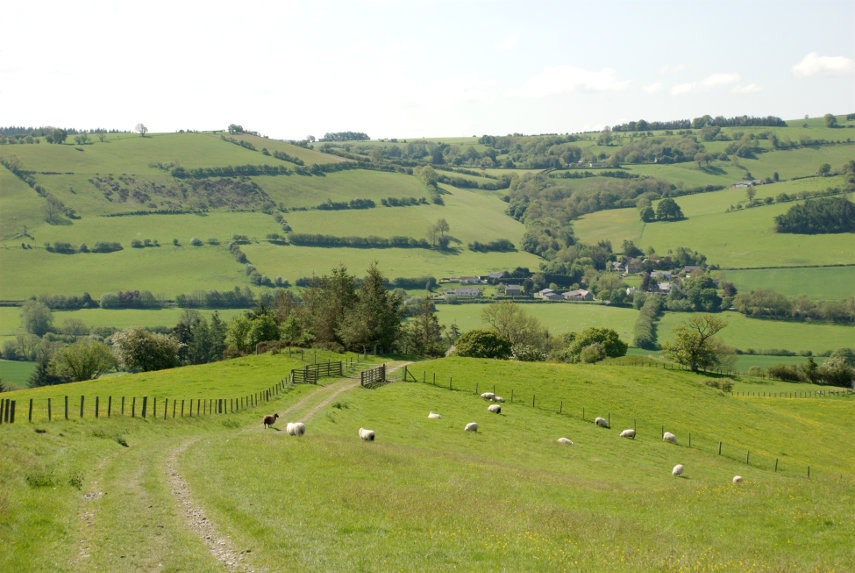 Dolley Green is still visible but you can see that I've gained more height. My little black friend is also still visible on the path. I carried on along the path and then it started to get steeper and steeper and I went up, up and up. Remember me saying that I wasn't expecting anything steep? Well I was wrong.

Having gained significantly more height I took two more photographs. The first looking back and the second looking ahead. 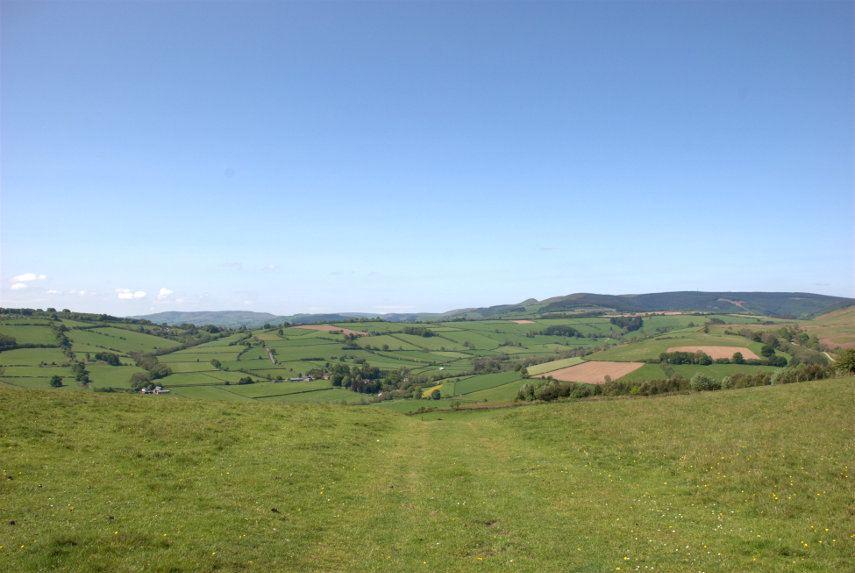 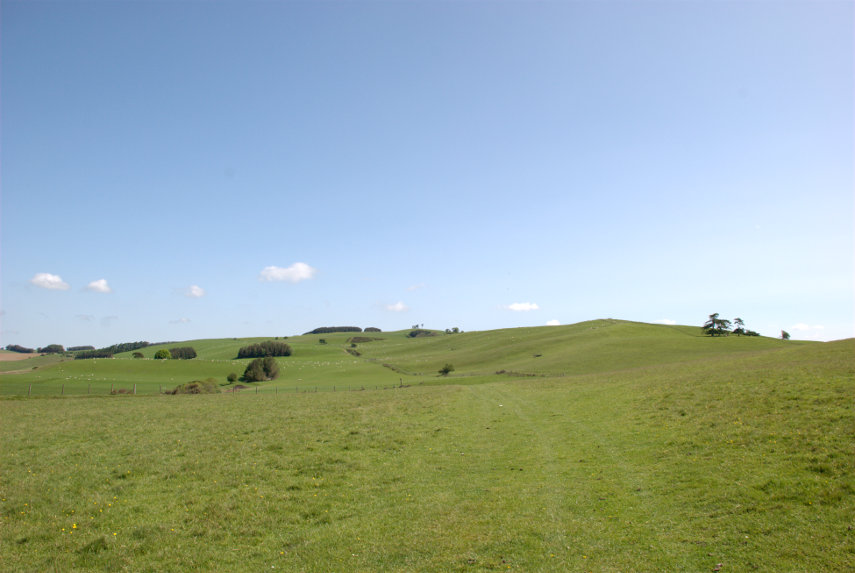 I was glad to see that the slope reduced a bit but I was still climbing. The path is well waymarked with signs such as this, english on the right, welsh on the left although some features such as gates or styles show just the acorn symbol. 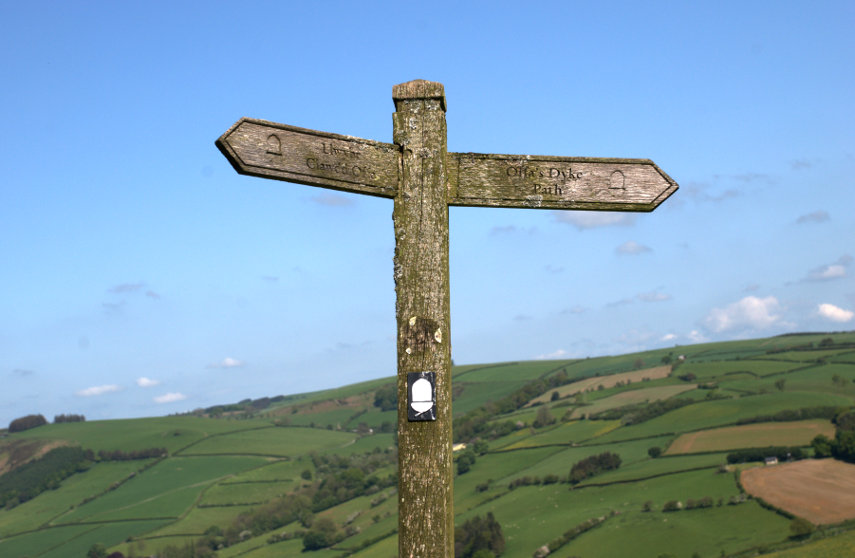 The acorn denotes that this path is a 'National Path' and, as this is the only national path around here, it shows that you are on Offa's Dyke Path. The 'National Paths' are long distance paths including ones such as the Pennine Way.

The views from up here were tremendous, as you might expect, and included the inevitable sheep. There are changes of direction on this path but they are well signed. 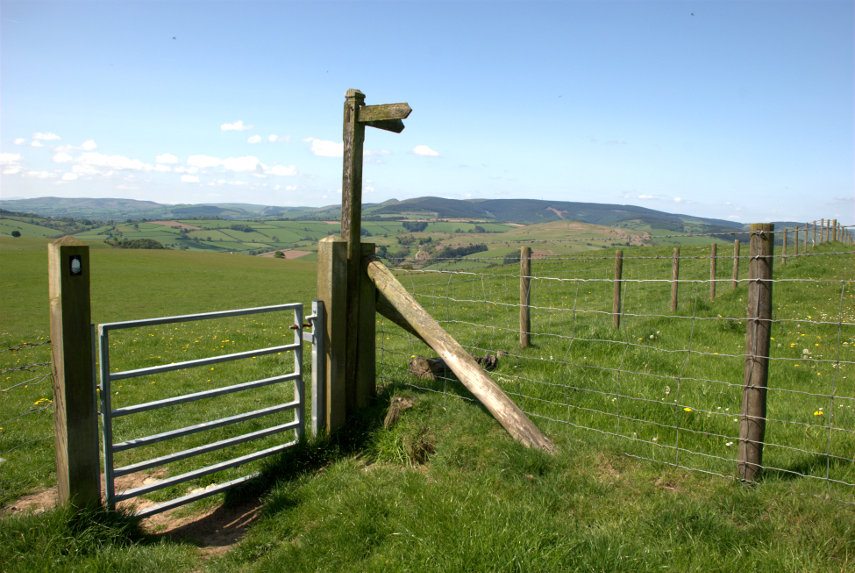 I have just come through that gate having turned a right-angle and you can see the 'National Path' symbol not to mention the view beyond. I must now have reached maximum elevation, thank goodness, and still the views are endless but that, of course, is one of the reasons for coming. 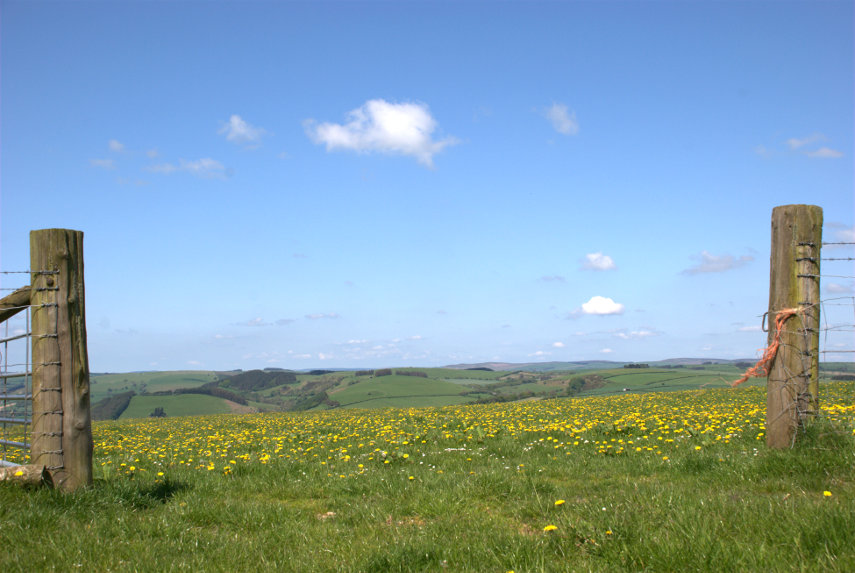 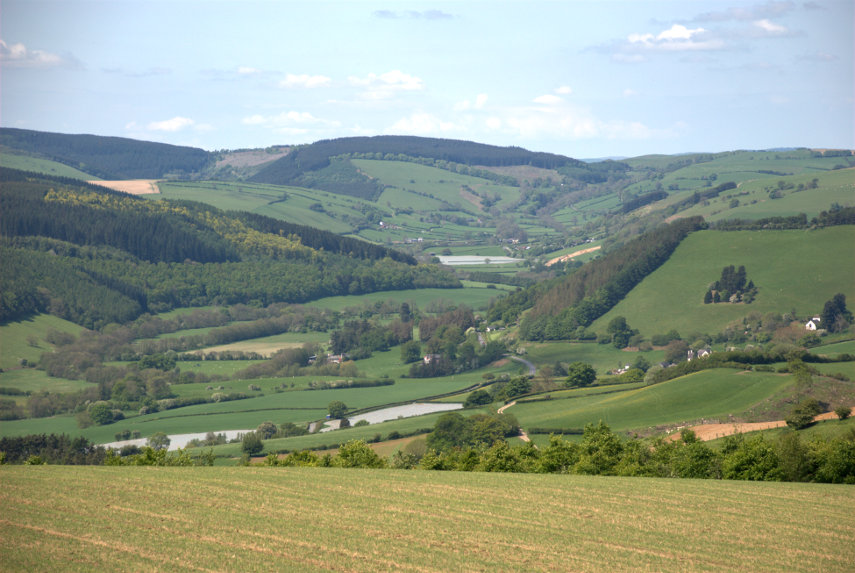 One thing you may have noticed and that is that there has been no sign of Offa's Dyke. That is about to change as I reach a part where the dyke is apparent. The dyke bank in the first picture should be visible with the ditch on the right and in the second picture the dyke is decorated with bluebells along its length. 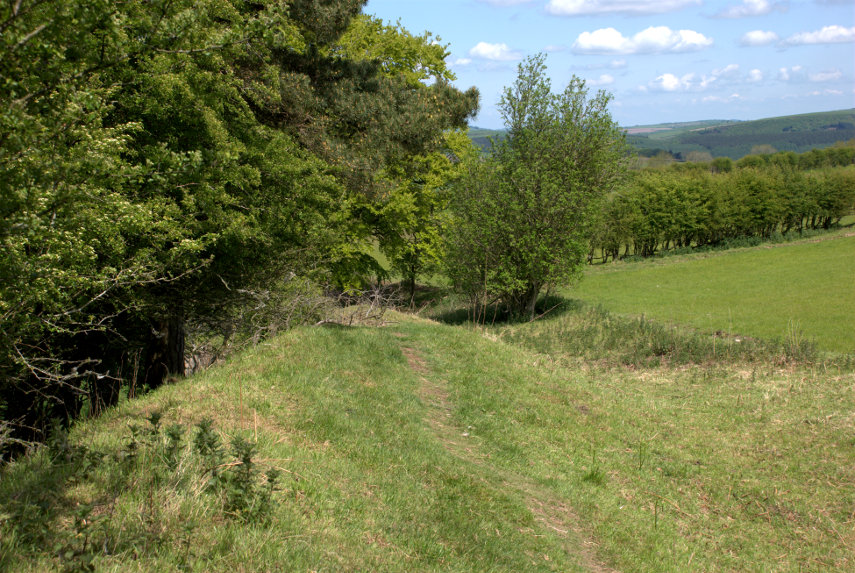 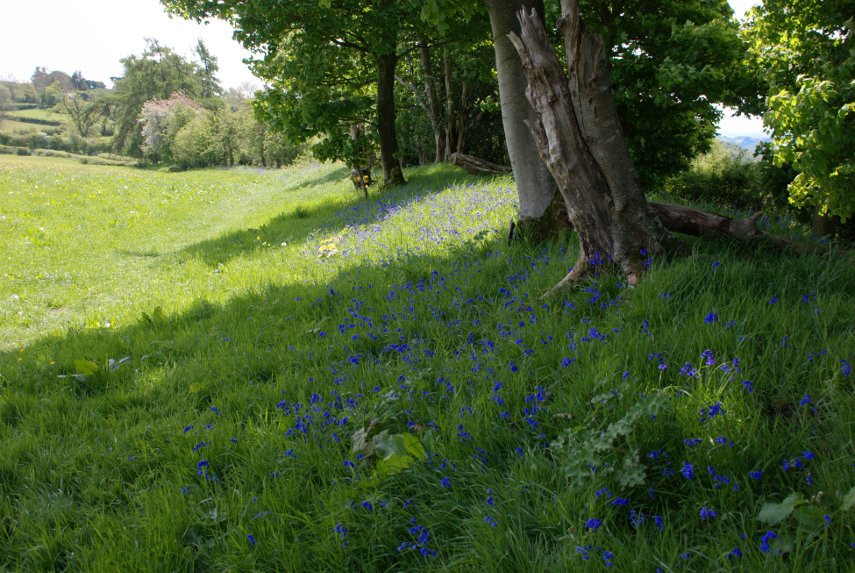 I mentioned earlier about the acorn symbol and this is another example: 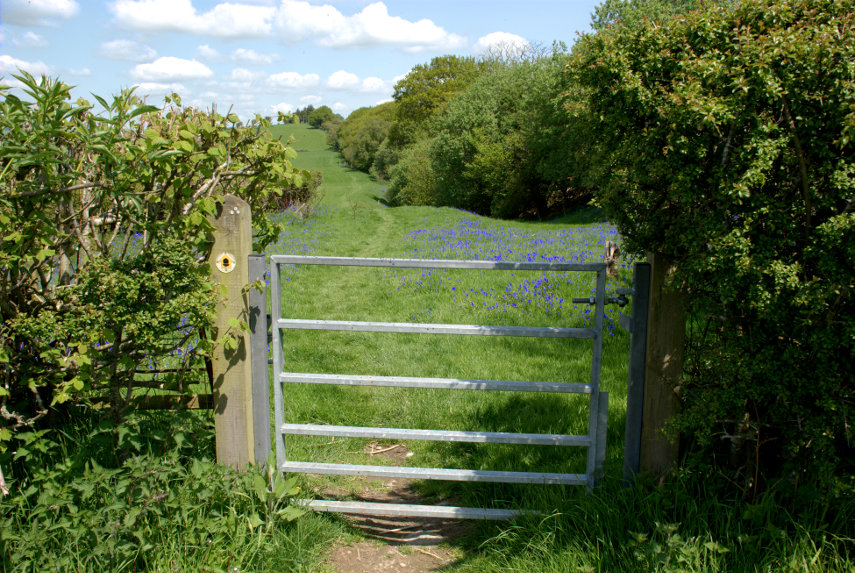 The acorn symbol is visible on the left-hand gatepost which tells you that you are on the right path. Just beyond is a lovely patch of Bluebells and the line of trees is actually growing on the dyke which is well formed along this length.

This next section shows the dyke very well as the bank is quite high and has a well formed ditch this side of it. 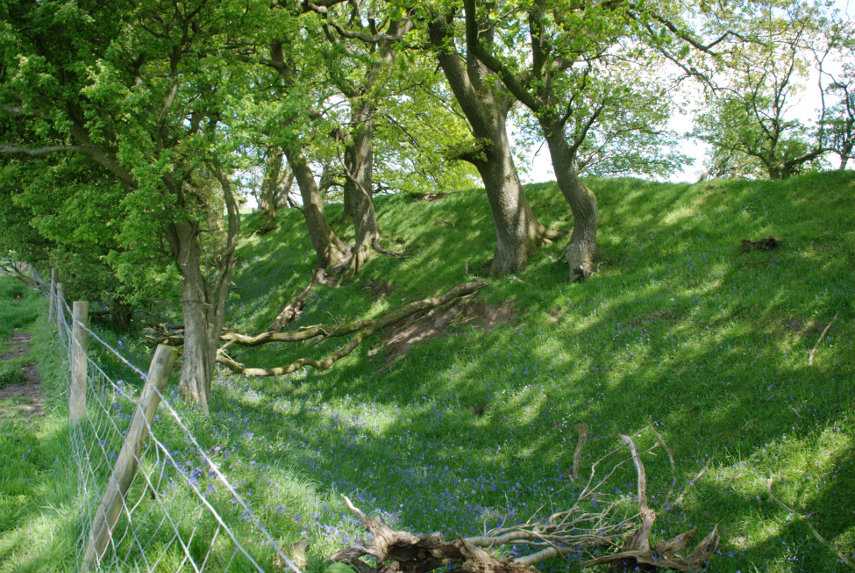 I am now approaching Knighton and I see that the rounded hump off to my left is in fact Garth Hill which is very near our house. The TV transmitter mast on the top is also just visible. 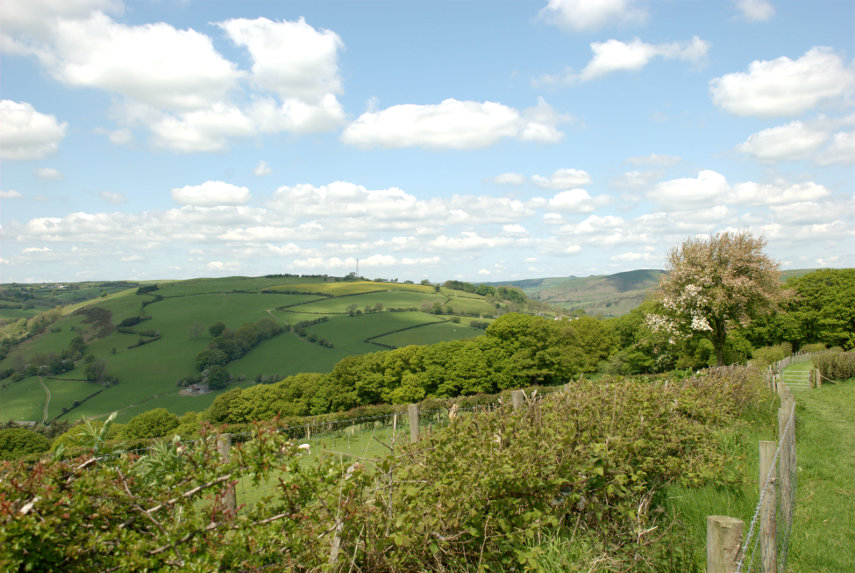 Soon after that I start down the wooded slope which will take back into Knighton. It's not very steep at first but I know, from looking at the closely packed contours on the map, that it's going to get steeper and it does. 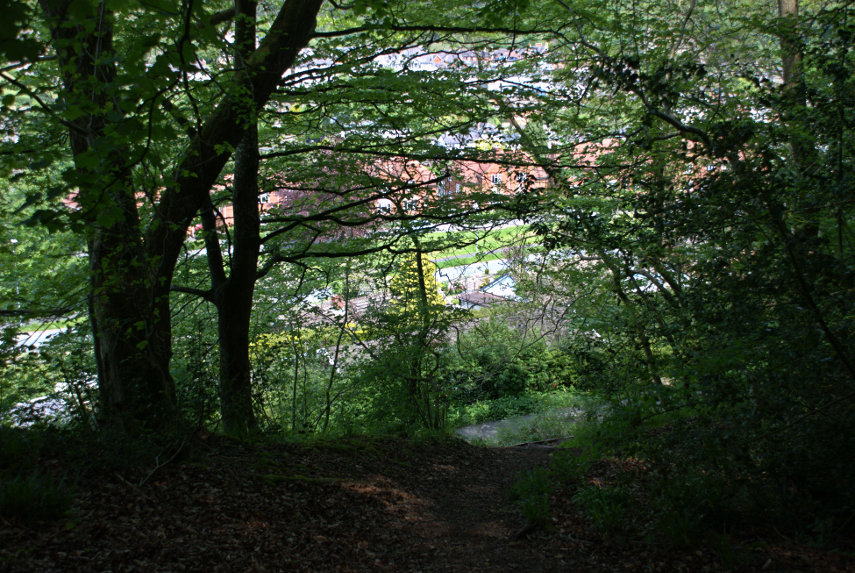 I can now see the buildings in Knighton below me, through the trees, and the slope is steep enough that the ends of my toes are resting against the front of my boots which becomes uncomfortable after a while. However I am soon back down and it's a short walk home.

The GPS statistics for my walk are below but you may want to skip them.

Distance 5.45 miles
Total time 3 hours 10 minutes
Of that time I was actually moving for 2 hours 4 minutes
Average speed 2.62 MPH
Maximum altitude 1112 feet starting from an altitude of 314 feet
I was climbing for 1 hour 11 minutes and descending for 1 hour 37 minutes

One thought on “‘Hello Dolley’ then ‘Up, Up and Away’”