On Tuesday the weather forecast for Wednesday was that it would been mostly sunny until around 3:00 pm and on Wednesday morning, yesterday, it was the same; mostly sunny. So we set off for the Elan Valley to see if it was worth returning in the, hopefully, better and warmer weather next year.

It was about an hours drive from home and was sunny for most of that until we got near our destination when cloud miraculously appeared and left us with very little intermittent sun. What a surprise. Well not really as this area is known to be one of the wettest in Wales otherwise it wouldn't be what it is. 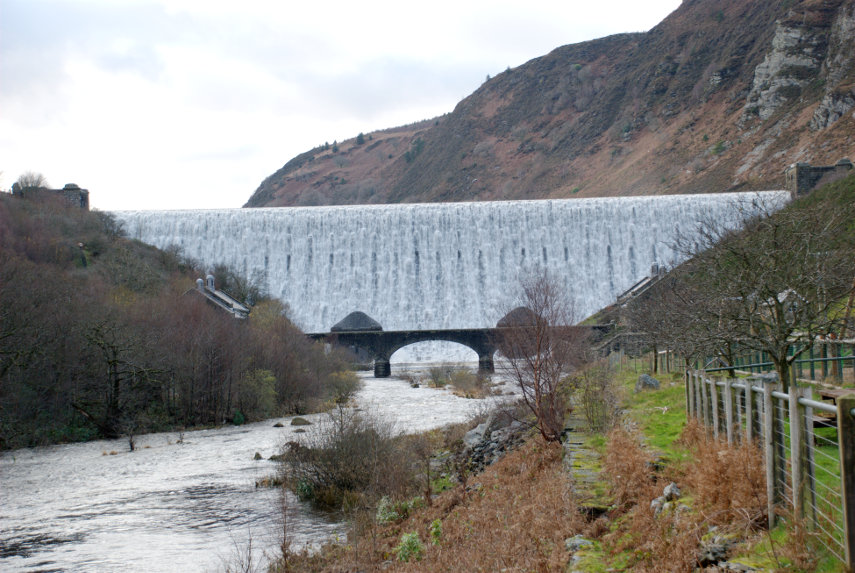 It's a series of five reservoirs, known as Claerwen, Craig-goch, Pen-y-garreg, Garreg-ddu, and Caban-coch, which were built between the end of the 19th century and the beginning of the 20th century. The one above, Caban-coch,  is the first dam to be reached when approaching from the nearest town – Rhayader (pronounced 'Raider') which is just 3.5 miles away.

The next picture shows the same dam, the reservoir beyond, and the rather threatening looking weather. 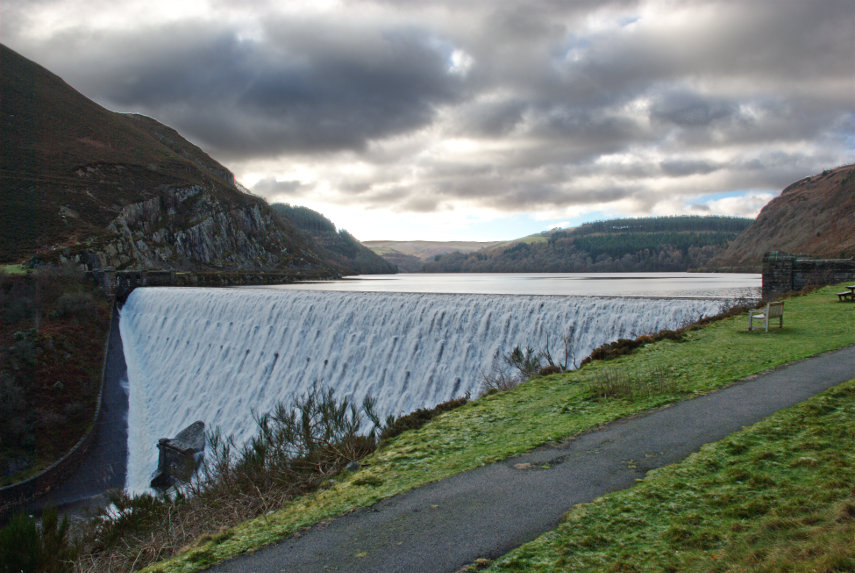 This link shows a map of the area which will give you an idea of where we went.

We started from the little white square near the 'Elan Village' label and went back along the white road to the B4518 where we turned left and followed that road until we reached the Y shaped junction where we turned left. Although the map appears to show that the road goes under the reservoir it doesn't – it goes across a long stone bridge with numerous arches. We just followed that road to its termination at the Claerwen Reservoir dam. 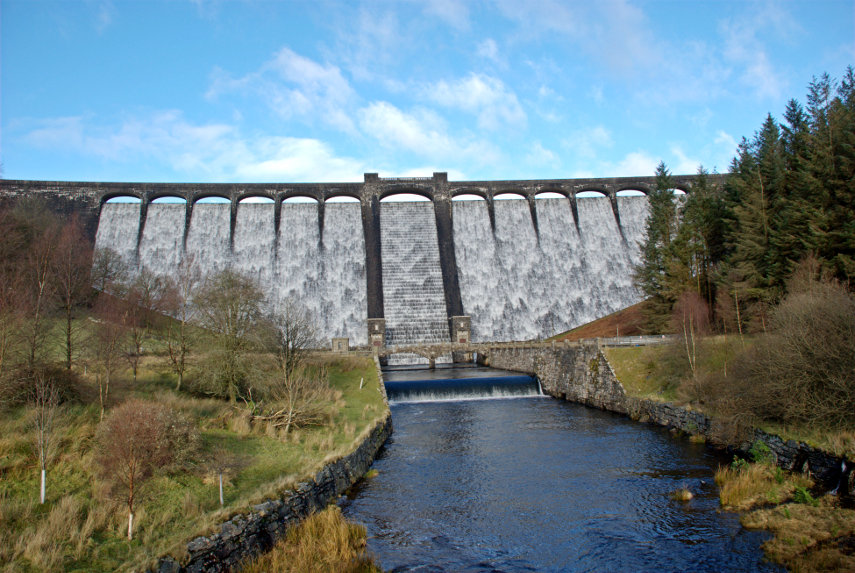 The road continues across the dam and stops at the other side where we get some different views. 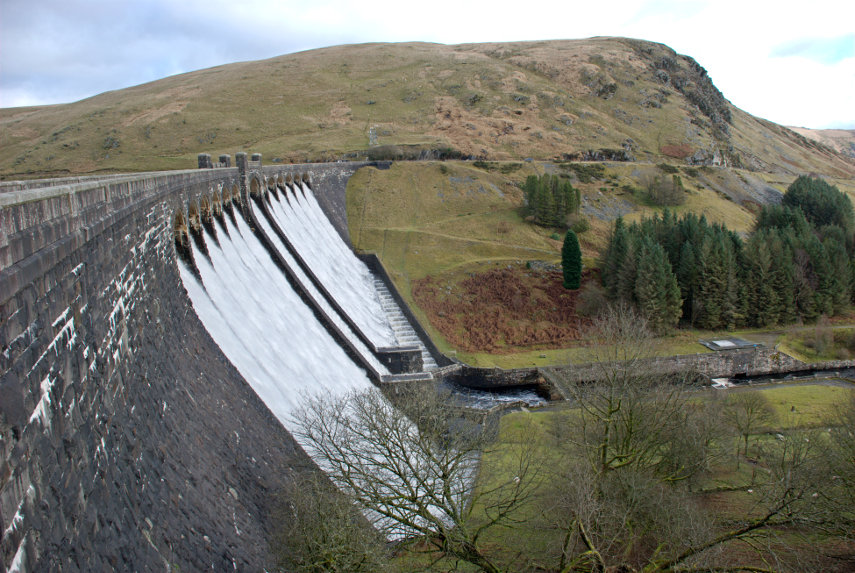 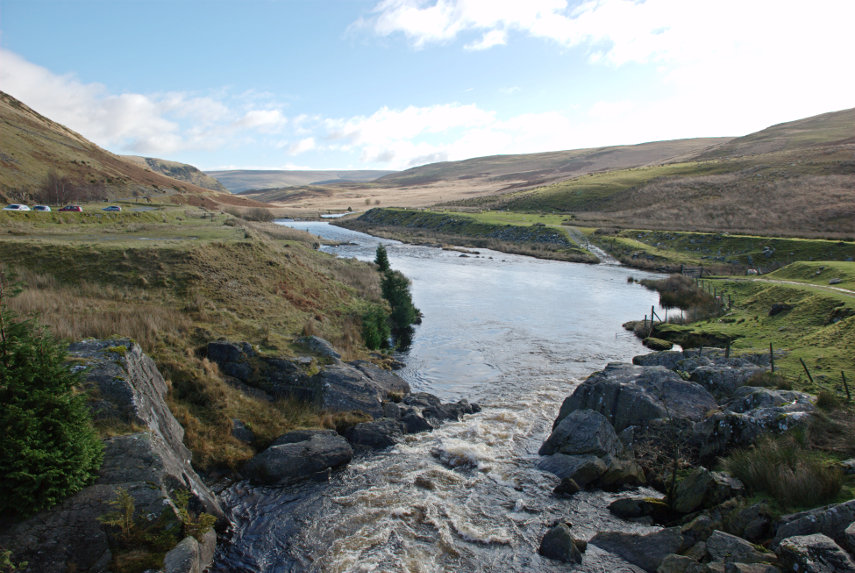 The picture above was taken from the top of the dam looking south back the way we came.

We set off back along the road we came on, as there is simply no other choice, until we came to that Y junction. where we turned left towards the Penygarreg Reservoir. 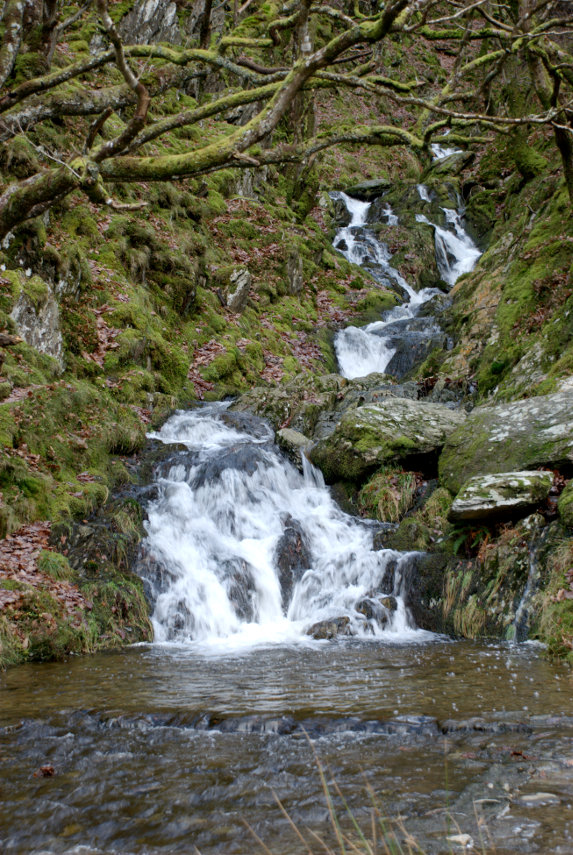 and continued on to the dam at Craig Goch reservoir. 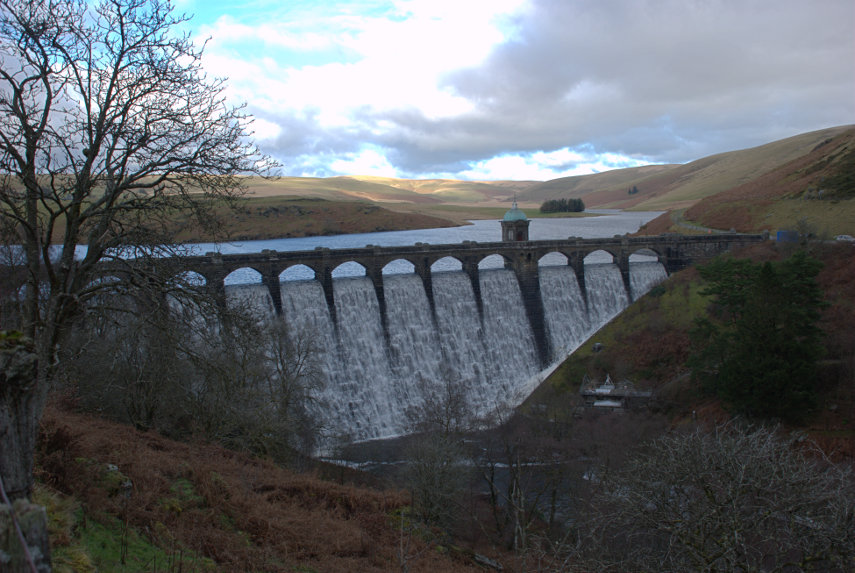 You may notice that by this time, around 1:00 pm, the cloud cover is increasing making the foreground pretty gloomy. We could have driven along this reservoir until we joined the road that we had used on a previous trip through the Cambrian Mountains to Devil's Bridge and then turned right back to Rhayader but it was near lunch time so we returned the way we came to the Visitor Centre.

They had a restaurant there and we had had a brief look at the menu when we started and wanted to try some of the appetising items on offer. We parked in their car park for which we had to pay £2:00, that covers a day, but we get a discount of 10% on whatever we spend in the restaurant.

The restaurant seems typical of this sort of establishment except that the food turned out to be anything but typical. The food was really very good and is produced on site. We both had their home made curry, chicken for me and beef for Amanda, and thoroughly enjoyed every morsel. Excellent! We would have like to have tried the cakes but we were just too full. Next time perhaps.

The photograph below was taken from where I was sitting and you may notice that through the window you should be able to see that wall of water flowing over the dam. We hoped the wall would hold out until we had finished our meal.

This trip was enough to convince us that was a lot here to see including lots of dramatic scenery and we intend to return next year in warmer weather to do a lot more exploring. It is only an hour's drive away after all.

The next day when we were back home it started to snow. Admittedly it was rather sparse and none of it settled but it was our first snow of the winter and in November. Brrrrr!

2 thoughts on “Walls of water”