Another lovely day yesterday saw us arrive at the free car park in Dedham where we intended to walk around the area where John Constable used to paint. A short walk from the car park brought us here. 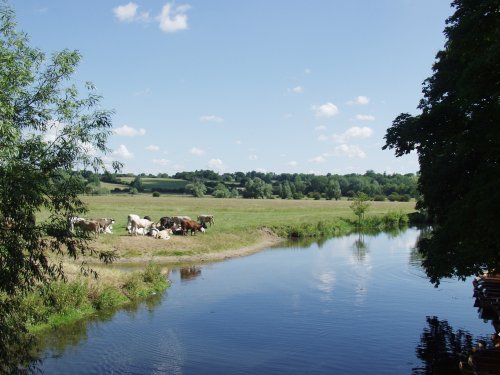 Just above the cattle you may see a horizontal line in the grass – that is the path we intend to take which follows the River Stour to Flatford.

After crossing the road bridge over the river we joined the footpath and set off beside the river. After only a short while we stopped to look at a small shoal of small fish, about five inches long, near the bank. We are no experts when it comes to identifying fish but we thought that they could be Gudgeon. The jury's out on that one.

This is the public footpath a little further on. 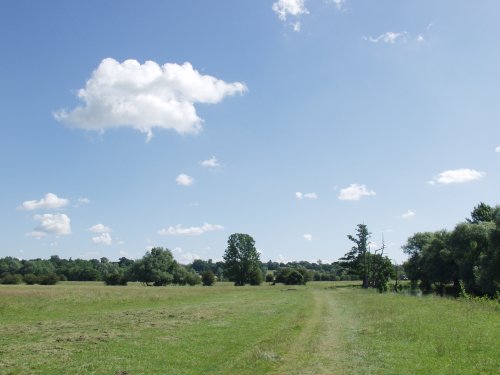 We soon reached a footbridge which we needed to take to get on the other side of the river where the path continued. We stopped again, by the river, and could see numerous bright blue damsel flies together with some powder blue dragon flies (Libellula) and some very small fry in the shallow water near the bank. We imagine that they are probably Minnows. 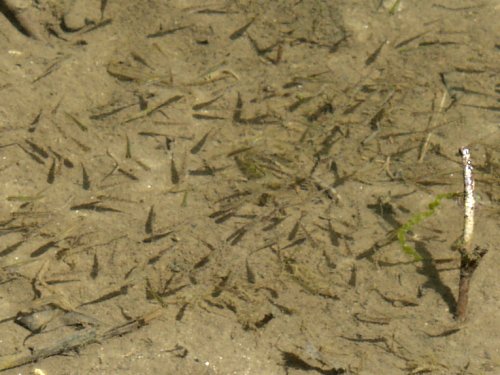 A little further on and we could see the bridge at Flatford in the distance with people leaning over looking at the river. 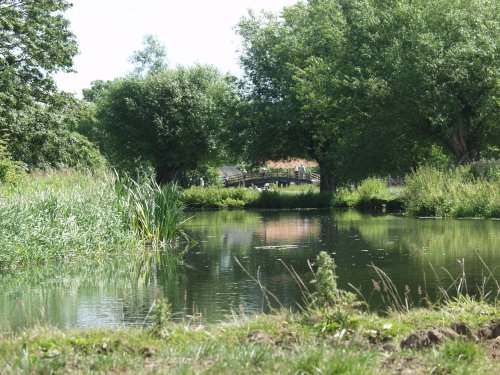 A very short time after there we were at the bridge with the thatched Bridge Cottage beyond. 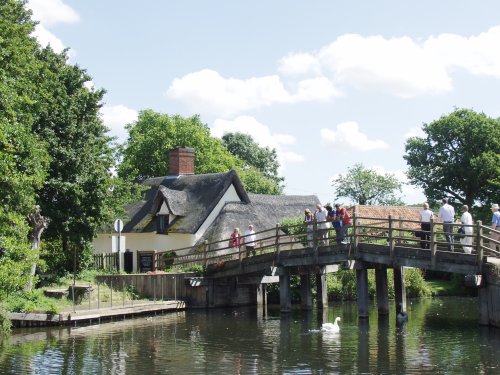 From the bridge we could see, looking back, the path by which we had arrived. 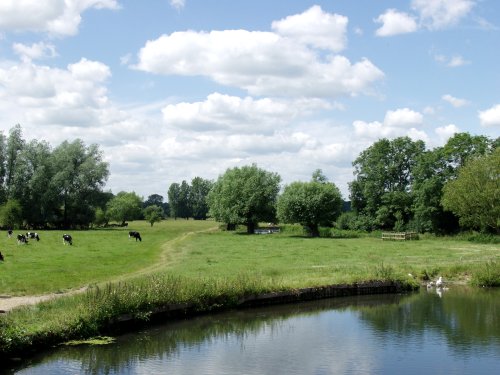 The National Trust, who own most of the properties here, run a small tea room attached to Bridge Cottage where we had a short break and some coffee. One thing that can be said about National Trust tearooms is that they know how to charge (one pound and 45 pence for a cup of coffee).

After our break we walked past Granary Barn (thatched) and Flatford Mill, which John Constable's father used to own, to reach Willie Lott's Cottage. 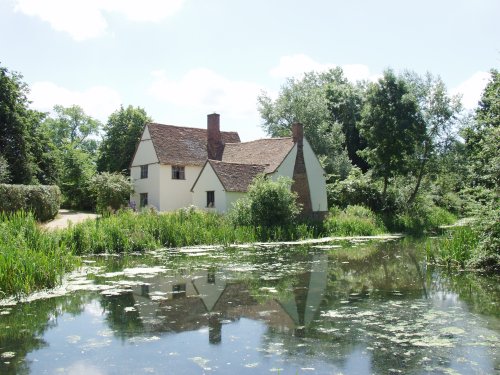 There are other pictures of this area on the web site on the Dedham Vale pages.

After looking around Flatford we walked about a mile up the lane to East Bergholt where John Constable once had a studio. We had a look in the church and in one place we could hear a pitter-patter noise above our heads in the roof. We decided that, from the sound of it, it must be a rain shower. There had been a few clouds about and some of them, although small, were rather dark. I went outside to check and found that it was still brilliant sunshine and there was no sign of rain. We never did find out what that noise was.

This church does not have a tower because they ran out of money when it was being built so they decided to build a small wooden building on the ground to house the bells. Very unusual. 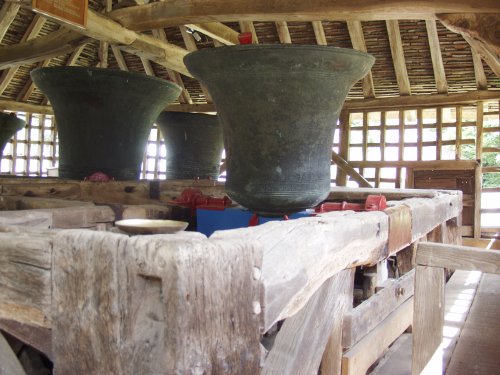 At least there is something to catch the water in if the roof ever leaks.

We walked back to Dedham from East Bergholt for a late lunch, at about 2:00 PM, in the Marlborough Head which dates from medieval times. 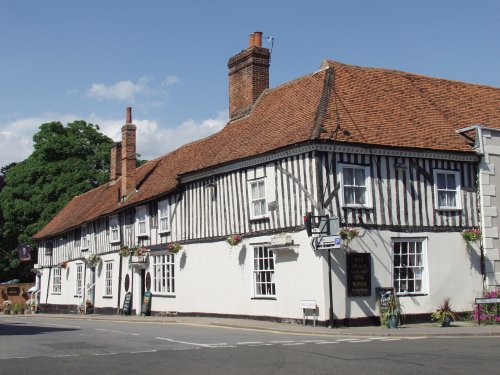 After lunch we had a good look around Dedham starting with the church. Have a good look at the church door. Quite a nice bit of carving although it does look a little worn but then it should do as it's been in place since the church was built in the 15th century. There can't be many church doors around which are 400-500 years old. 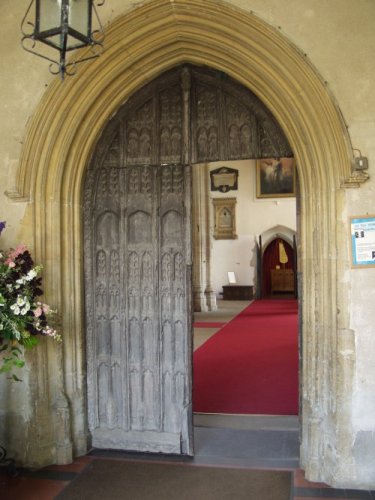 Just opposite the church is the Sun Inn built in the 15th century and walking through the archway into the yard behind you see this. 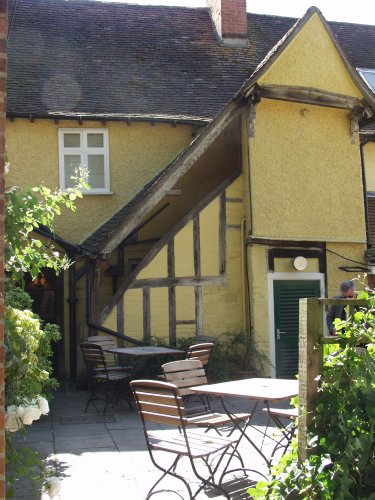 That diagonal structure is an external staircase, with a separate roof, giving access to the upper storey. When this inn was built such staircases were commonplace but there are very few of them left.

Our last port of call was 'Southfields' the earliest parts of which date from the 14th century. 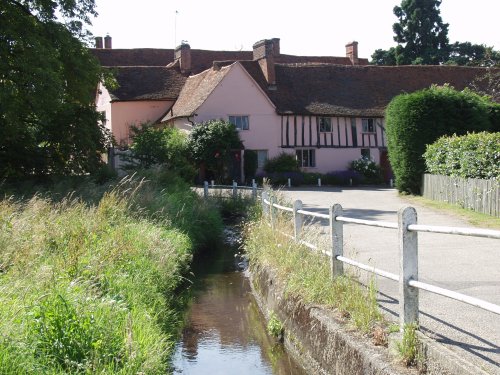 A wonderful old building built in quadrangular form with a courtyard in the centre. This is the view through the main doorway into the courtyard. 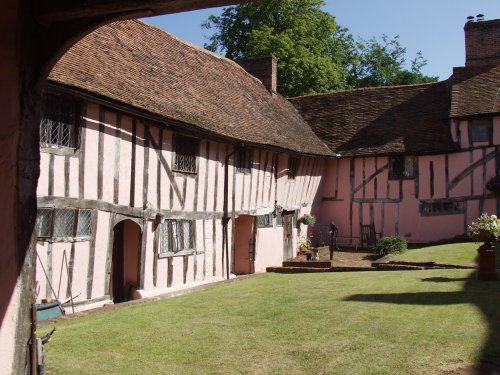 Time to call it a day. We thoroughly enjoyed our walk – I hope you did too.