Marie and Lisa’s trip to Great Britain didn’t go according to plan. A short while before departure Lisa contracted an infection but decided she was well enough to go and they both arrived in Colchester on Wednesday 1st April as planned.

On Thursday Amanda and I travelled to Colchester and all four of us walked round Colchester and saw the castle, Timperley’s, the Balkerne Gate and the roman wall, the timber-framed cottages by the river and Castle Park. Our final location was the ruins of St. Botolph’s Priory. I haven’t included photographs of the places that we visited as they can be seen on the web site Colchester pages however just to prove that Marie and Lisa were really there I’ve included this picture. 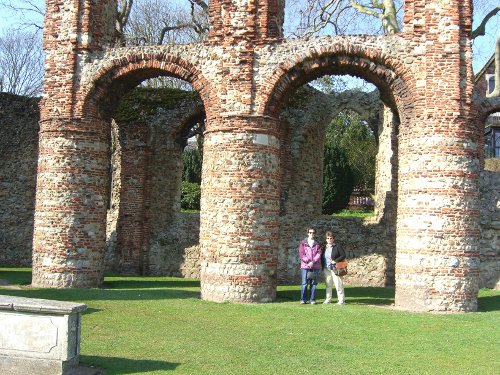 We arrived in Colchester next morning, Friday, expecting to take them both out for the day only to find that Lisa’s infection had flared up again and she’d had very little sleep. She had decided to go back home the following day, Saturday, and to stay in their rented cottage while we took Marie out. It was such a shame that, having come all that way, she was having to go home because of some rotten ole bacteria.

We took Marie to Finchingfield and Thaxted and tomorrow, Saturday, she was going to London with Lisa and was going to do some shopping before returning to Colchester. We arranged to take Marie to Dedham Vale on Sunday.

We heard that Lisa arrived home without problems and is, apparently, on the mend. The three of us went off to Dedham on Sunday, walked to  Flatford then up to East Bergholt and back to Dedham. As we had some time to spare we decided to explore the nearby villages of Stoke-by-Nayland and Nayland and both turned out to be picturesque little villages with some very interesting old buildings including this one in Stoke-by-Nayland. 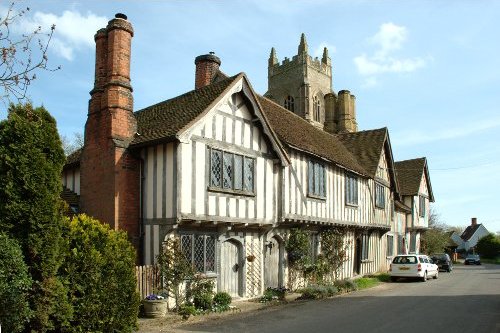 After looking around Stoke-by-Nayland we moved on to Nayland. 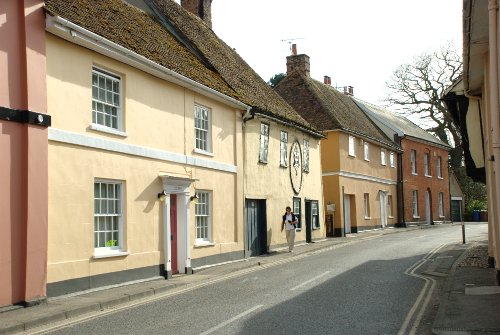 That person on the pavement desperately trying to look like a local and failing dismally is, of course, Marie. After leaving Nayland we took Marie back to Colchester and Marie decided that tomorrow she’d like to see Cambridge.

On Monday we collected Marie and drove to one of the Park & Ride sites around Cambridge. They do have a very well organised Park & Ride service in Cambridge with buses leaving the car parks very frequently.

Most of the places we visited are listed on the Cambridge page but one view that isn’t listed is this one: 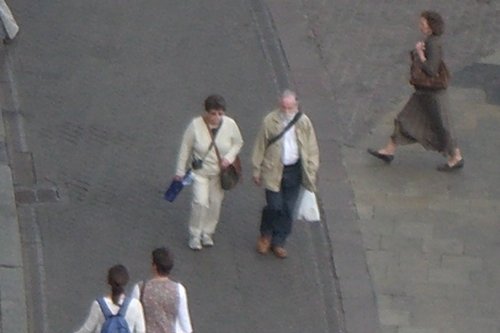 A spy-in-the-sky view of Marie and I taken by Amanda from the top of the tower of St. Mary’s Church. We were all quite tired by the end of the afternoon and had agreed that Marie would come over from Colchester by bus to our house to do a little local sightseeing on her final day in England.

On her last day, Tuesday, Marie came over to us and we all walked on public footpaths to Layer Marney Tower. On the way we saw a lot of Wood Anemonies in flower and heard a Skylark in the distance. After looking at Layer Marney Tower and exploring the local Tudor church we came back to our house for lunch and then, after lunch, we drove the short distance to Tollesbury.

I’ll leave you with this picture of Amanda and Marie about to be run down by a very large lightship. 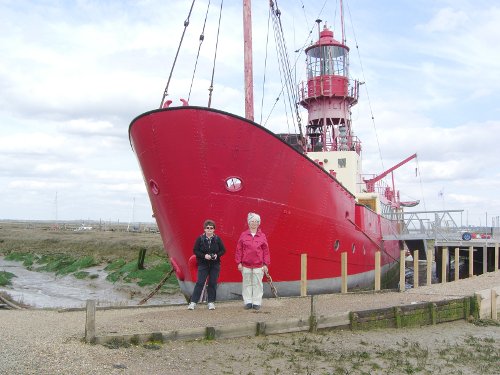 That was our last day with Marie, leaving 3 pairs of very tired legs, after which she went back to Colchester on the bus and left for home the next day. She arrived home without problems albeit after a long and tiring journey.

One thought on “Six tired legs.”