It all started so well too. We arrived, as usual, at Liverpool Street Station after an uneventful journey and walked down to Aldgate where, by chance, we discovered something that we weren't anticipating. 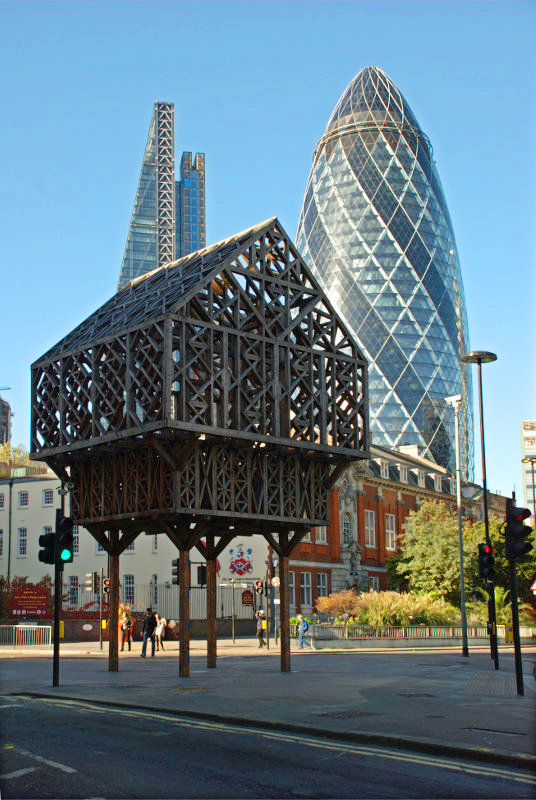 This is a modern wooden monument which is standing on the site of one of the old London gates, namely, Aldgate. It is thought that there was a gate already spanning the road to Colchester in the Roman period, when the City wall itself was constructed and it was always an obstacle to traffic. It was rebuilt between 1108-47, again in 1215, reconstructed completely between 1607-09 and finally removed in 1761.

Geoffrey Chaucer occupied appartments above the gate in the late 1300s when he was employed as a customs official.

It's amazing what can be found just wandering around London. However we set off once again along Minories and soon arrived at our first intended destination – the Tower of London. This is where things started to go pear-shaped or, to be precise, people-shaped.

We have been to this area many times but have never seen so many people and, so it turned out, they were all around the Tower. One of the factors was probably that it was half-term and children were on holiday this week and also that it was a beautifully sunny day and not at all cold.

The other factor which may explain the numbers of people was this: 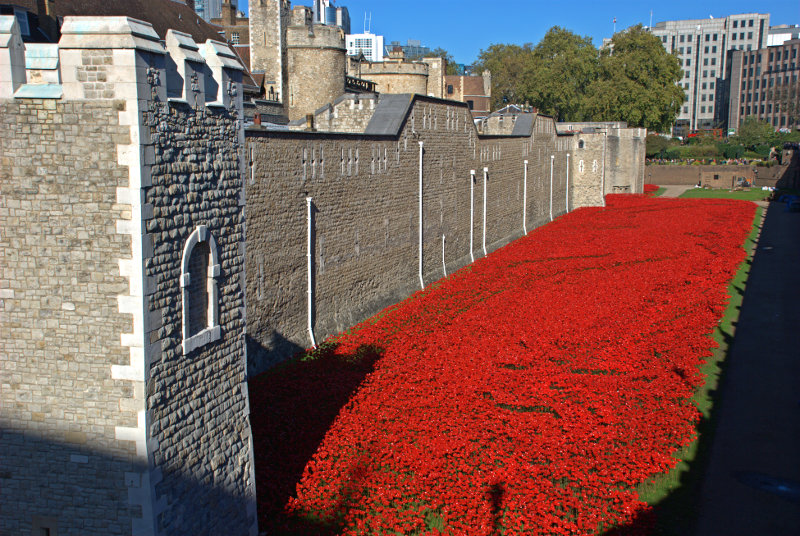 You have probably heard about these ceramic poppies. There is supposed to be one for every British life lost in the first world war but I'm not going to count them. They are around all four sides of the Tower and so are the people trying to view them. The crowds were so dense that one could only shuffle along and, consequently, it took a long time to get round.

We did, eventually, get all the way around the Tower and here are a few of the photographs that I took to prove it. 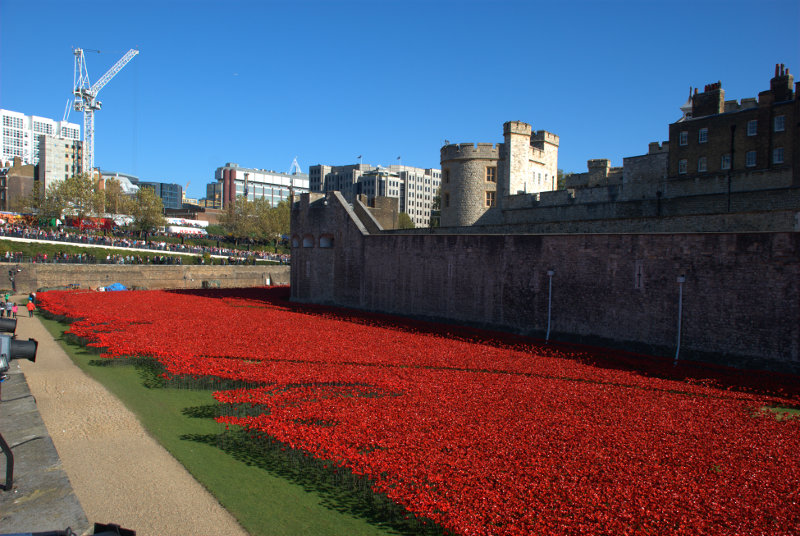 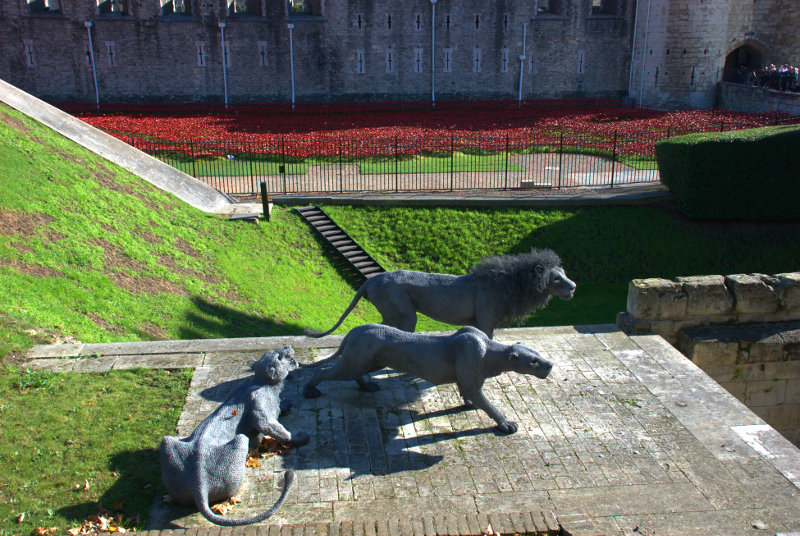 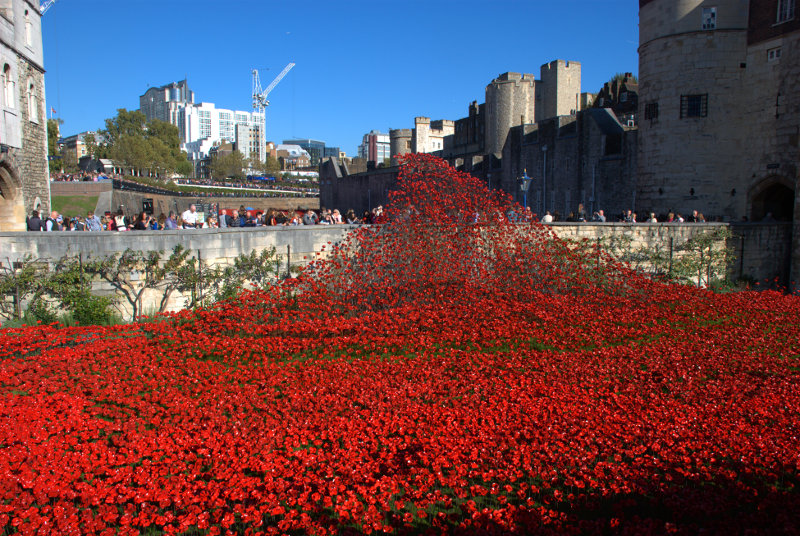 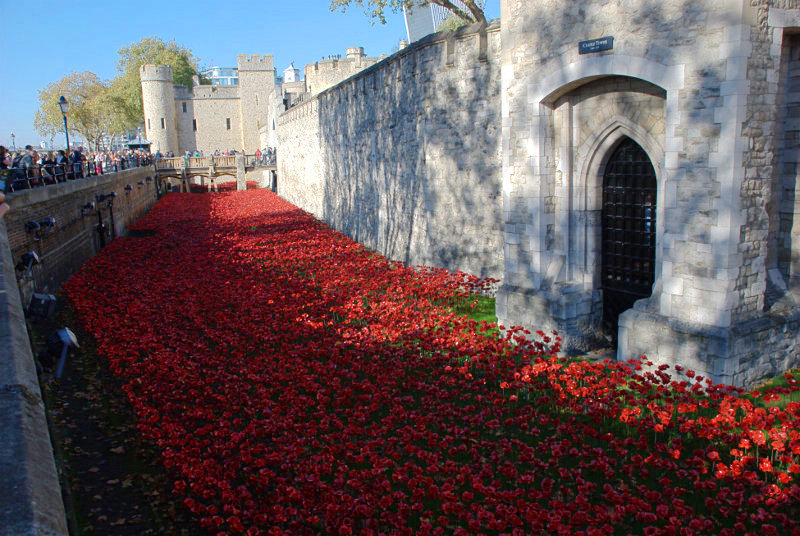 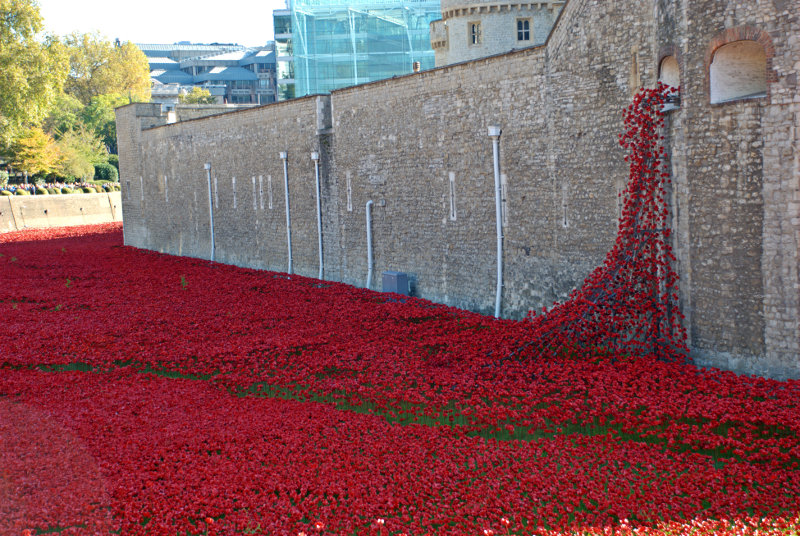 I managed to get a quite nice photograph of the Tower, once we had reached the other side, and a nice picture of Tower Bridge. 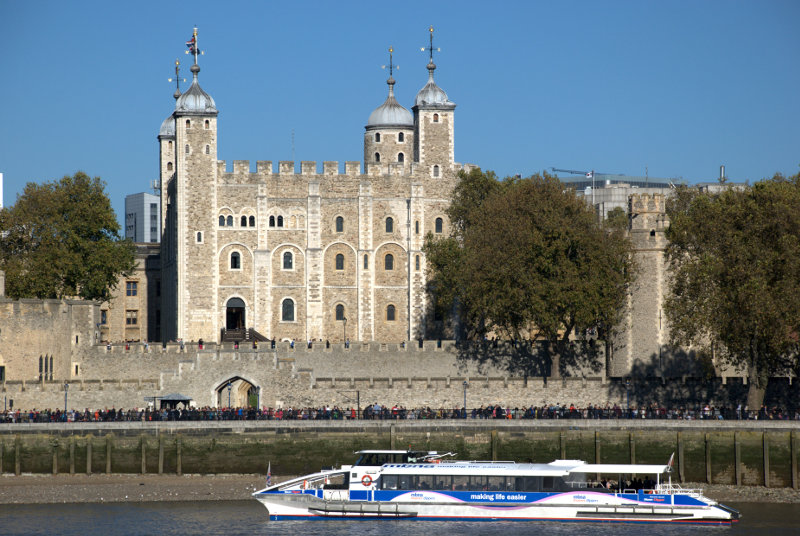 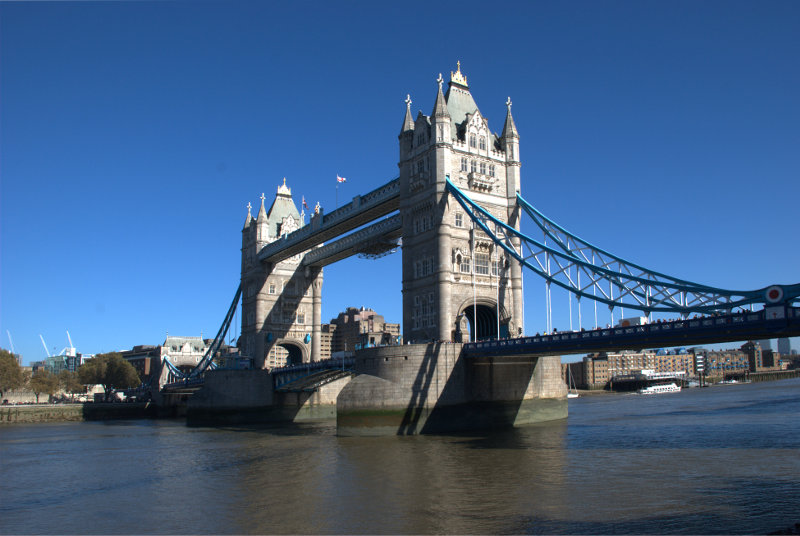 We turned round and headed east along Shad Thames. As it was now 12:15 we decided to stop in Peapod for an early lunch. Although it's small and the range of offererings is also small the soup, whatever the flavour, is alway delicious.

After lunch we headed further along Shad Thames until we could access the riverside walk. Staying close to the riverside we had some interesting views of the Thames, one of the old docks and some of the converted old warehouses. 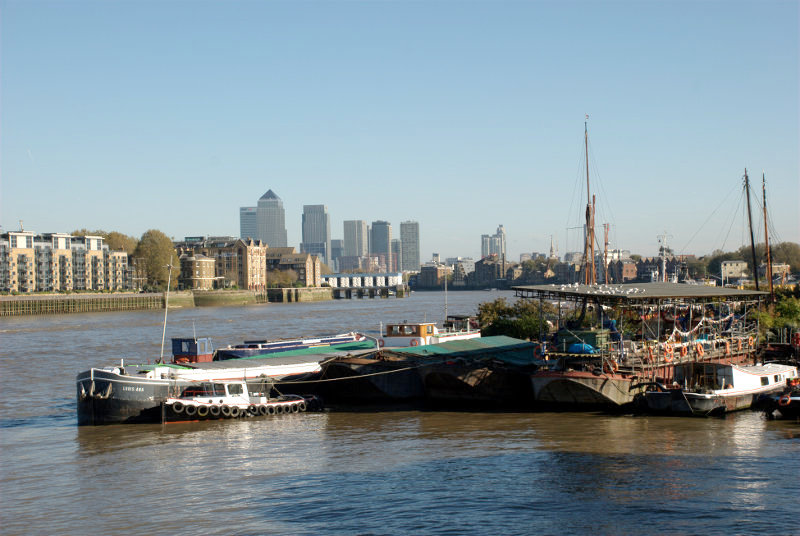 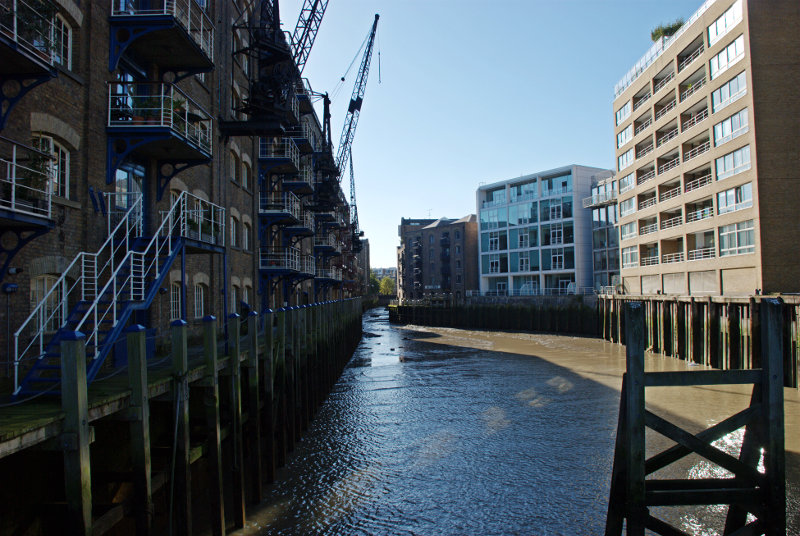 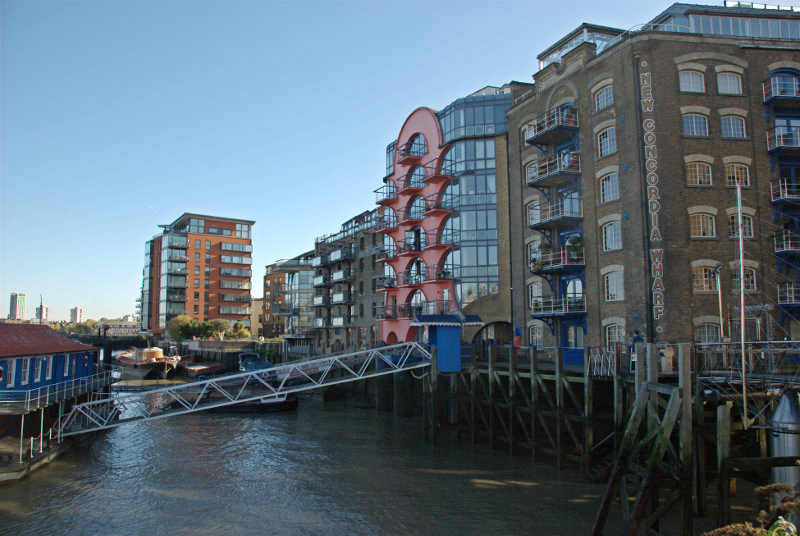 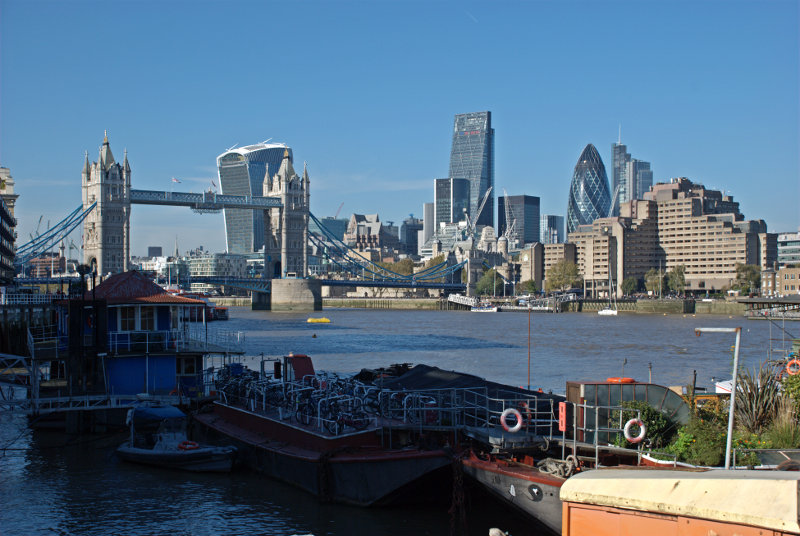 Then the riverside path diverts inland to the narrow streets of Bermondsey. We found that here, as we found in Wapping on the north side, a lot of the old warehouses have been converted to expensive accomodation some with rather splendid river views. 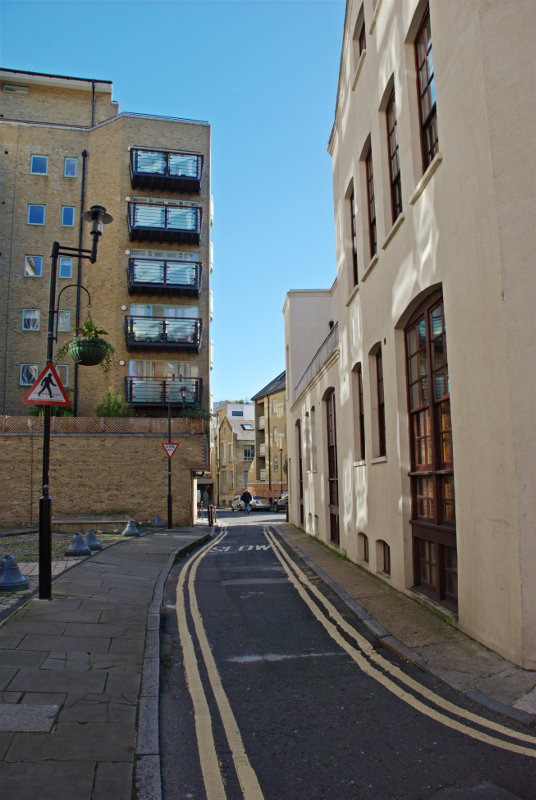 We followed Bermondsey Wall (that's a road not a wall) and again, as in Aldgate, we came across something totally unexpected. 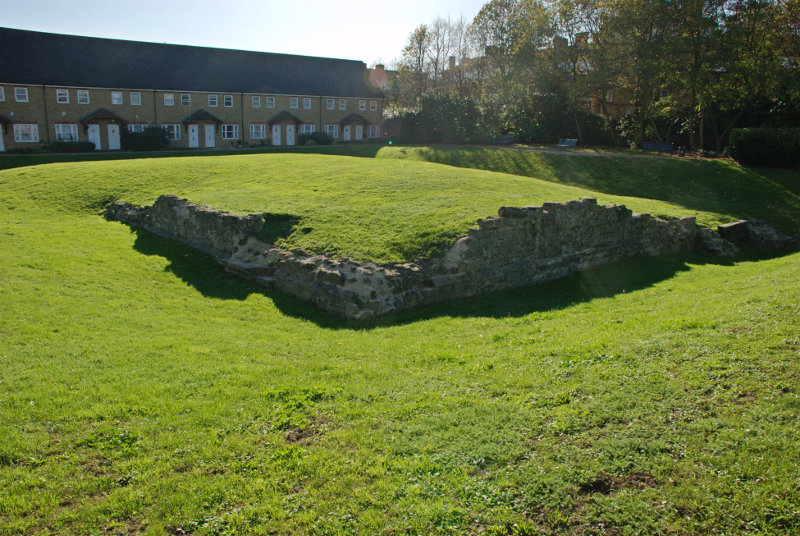 This is all that remains of King Edward III's manor house, built over 650 years ago, on what was then a small island surrouned by marshland.

These remains are in Bermondsey Wall East near the Angel Pub which dates from around 1830 and the pub is therefore Victorian. 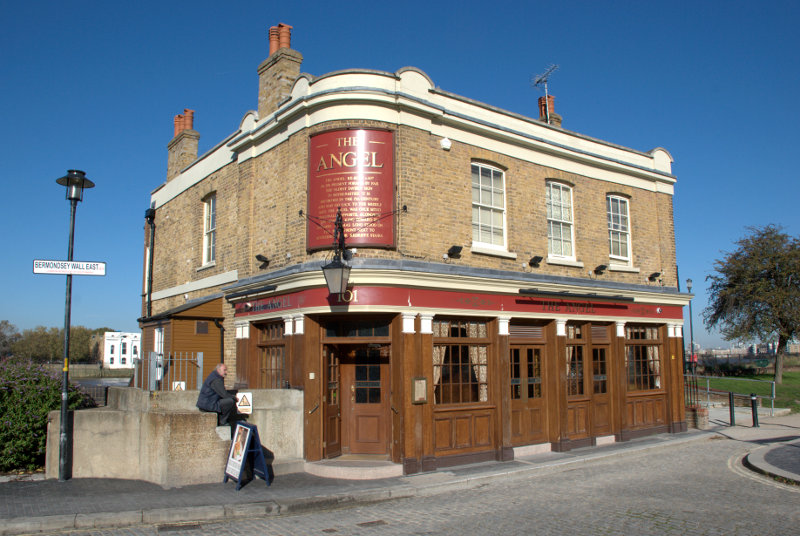 Just a short way on we found King's Stairs Gardens which leads to Southwark Park. We did expect to find this and it was an attractive garden but we didn't have time to explore the relatively large park. 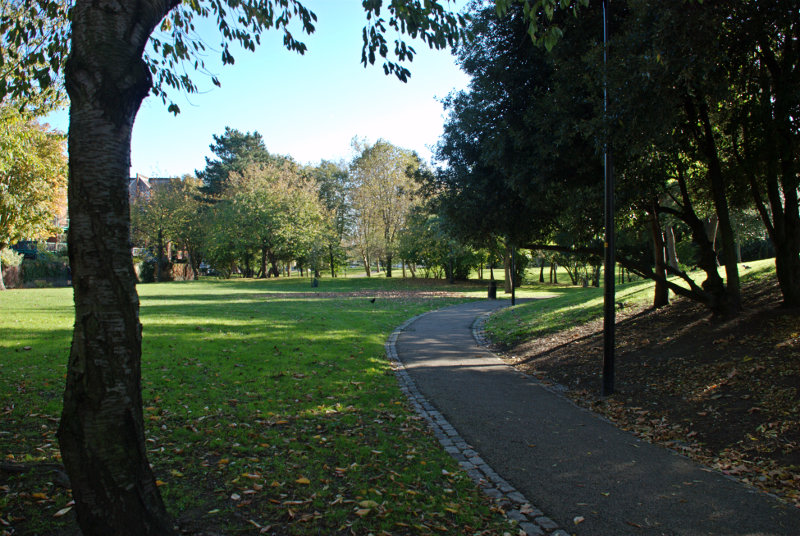 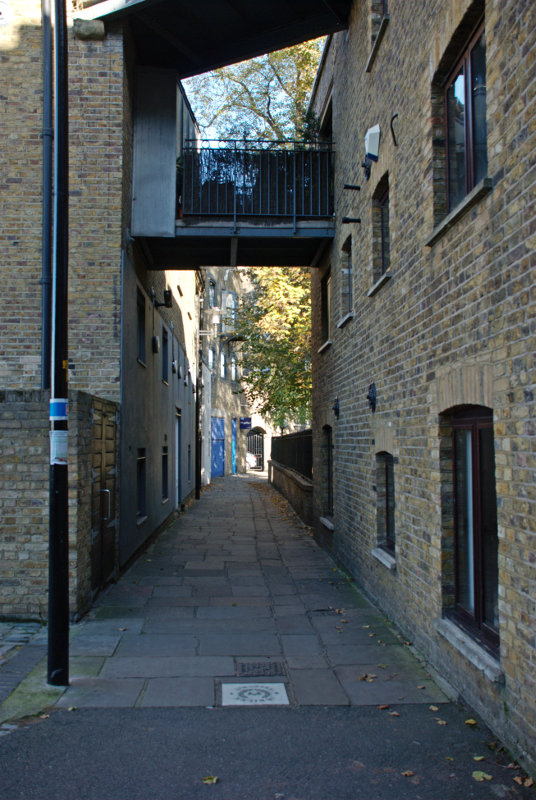 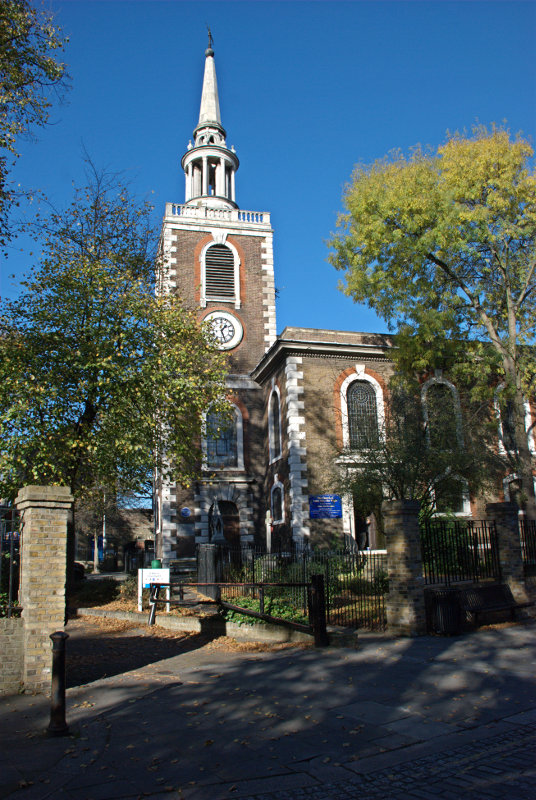 The present church replaces the previous 12th century building and was completed in 1716. It was designed by John James, an associate of Sir Christopher Wren.

Shortly after this we passed the Mayflower pub. 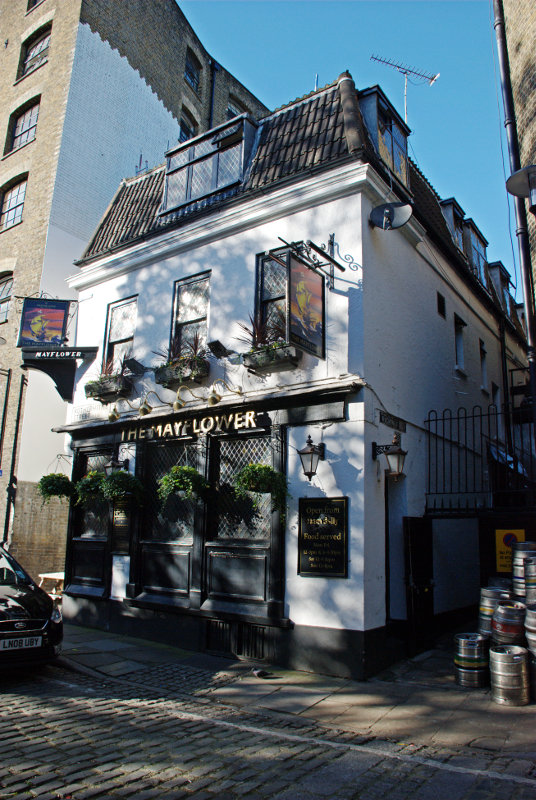 The original pub was built in the 16th century but was substantially rebuilt in the 18th century and has associations with the Mayflower which took the settlers to America. Christopher Jones was Master of the Mayflower and he lived in Rotherhithe and is buried in an unmarked grave in the churchyard of St. Mary's Church. The Mayflower (ship) , apparently, was moored nearby before it left on its journey to America via Portsmouth and Plymouth.

Just past the Mayflower pub was what I can only describe as a 'garden gantry'. 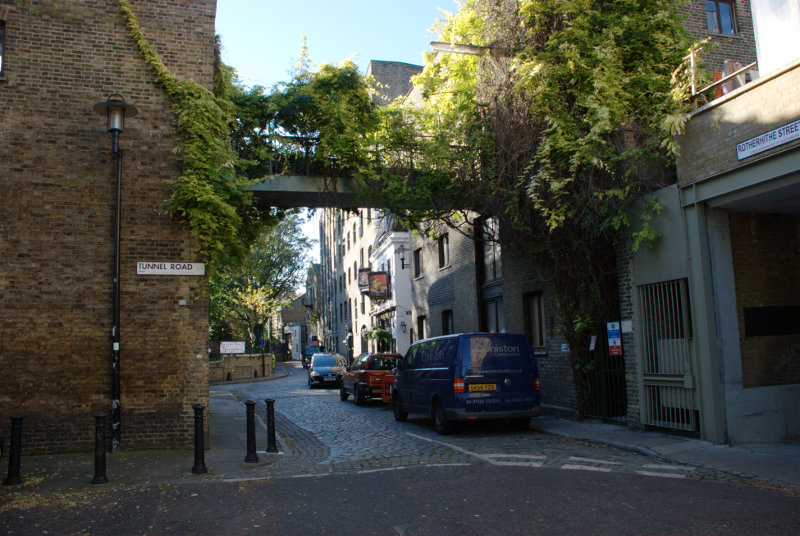 This view is looking back after we had passed under it. You should be able to see the Mayflower pub on the right and, a little further back, St. Mary's Churchyard on the left.

We were now at our next planned point of interest. 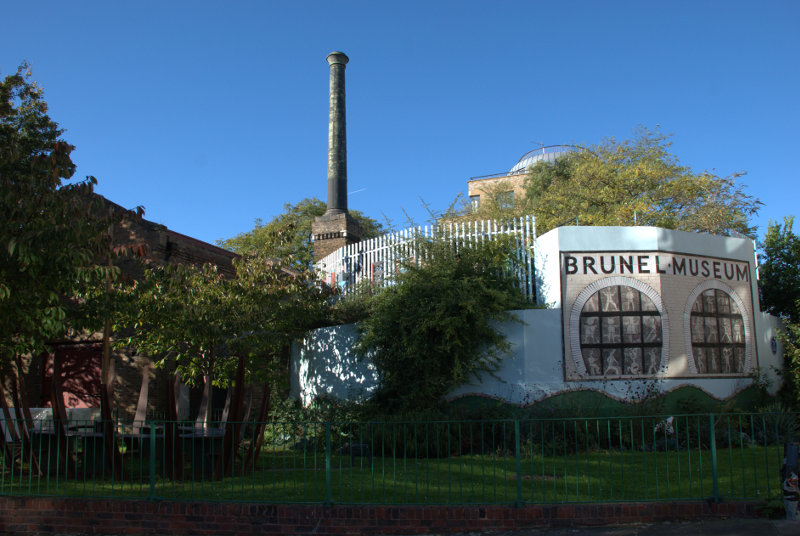 This was the pumping house built for pumping excess water from Brunel's tunnel under the Thames which was started in 1825 and opened in 1843. This was the world's first tunnel to pass under a river and if I were to say that it was an arduous project it would be an understatement particularly when one realises that the Thames was like an open sewer at the time. I should also mention that it was Marc Brunel, Isambard Kingdom Brunel's father, who oversaw this project although Isambard did join the project much later.

The chimney which carried the steam engine exhaust is rather obvious.

The pumping house is now a small museum and to one side is the original shaft from where the tunnels were started. It is possible to access the shaft on guided tours which take place only on some days. Check the web site if you're interested. The chairs on the floor of the shaft are for visitors when they are listening to the guide. 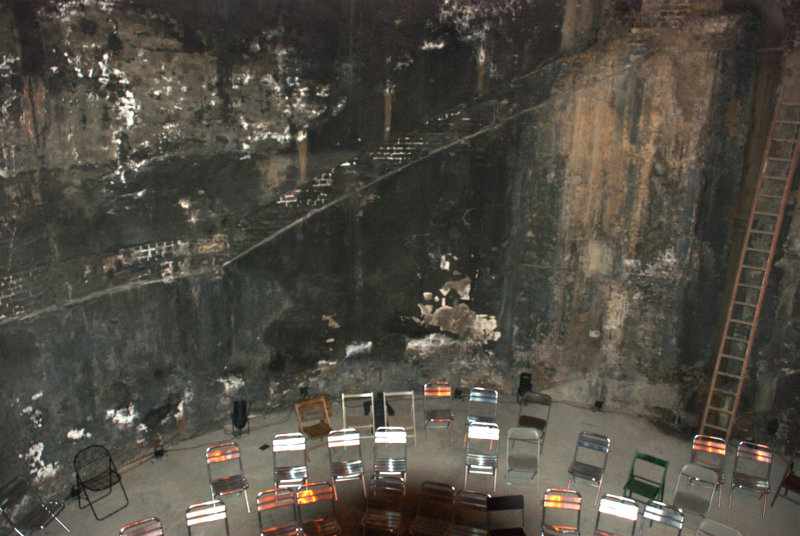 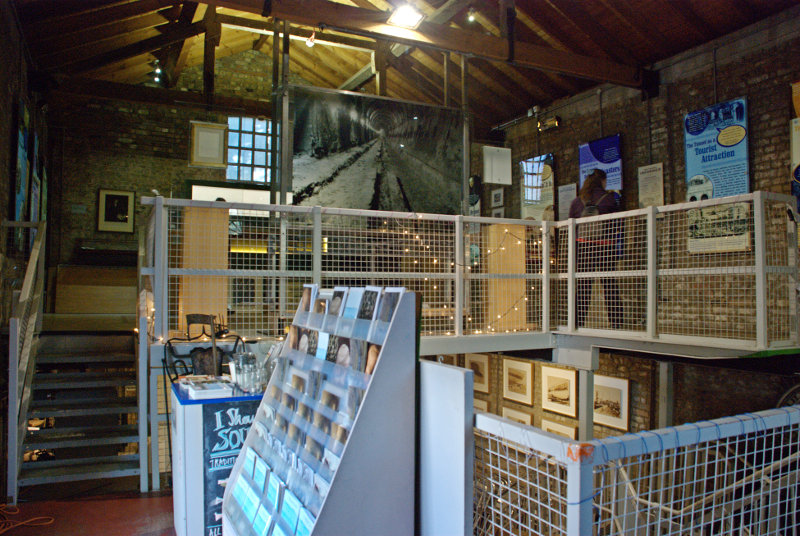 We walked on a little further staying close to the river until we reached Surrey Water where we turned towards the river along the very short canal to see an old obsolete bascule bridge similar to that which we saw at Shadwell. 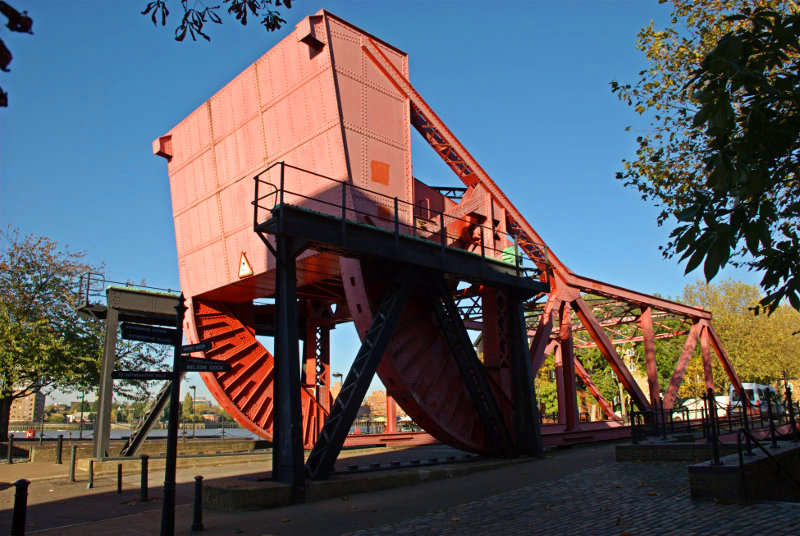 That's a chunky bit of machinery and so back to Surrey Water with a view towards Canary Wharf. 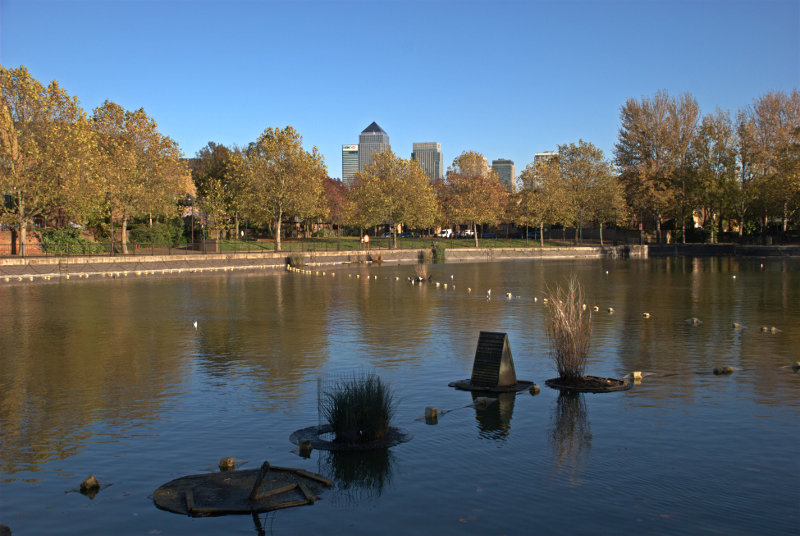 Walking to the far end of Surrey Water we found the entrance to the canal, with its little bridge, easily enough and followed the canal which heads for Canada Water. It reminded us very much of the canal we followed from Wapping to Shadwell Basin on a previous trip. 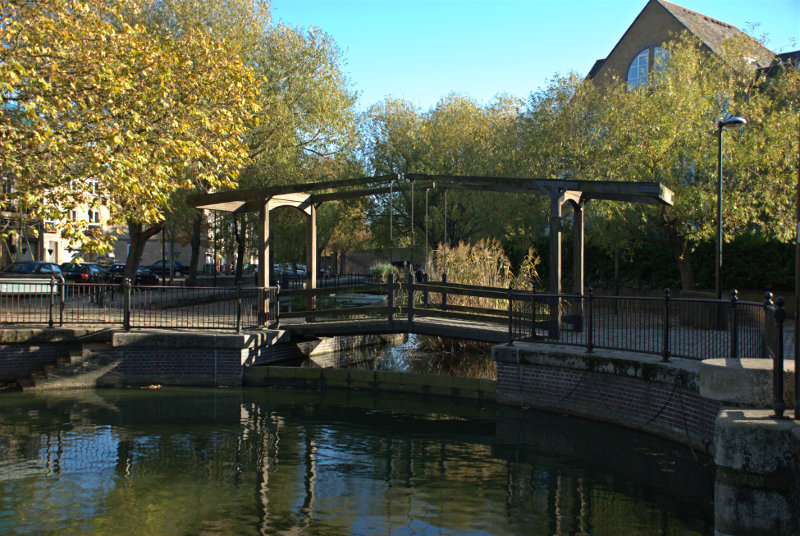 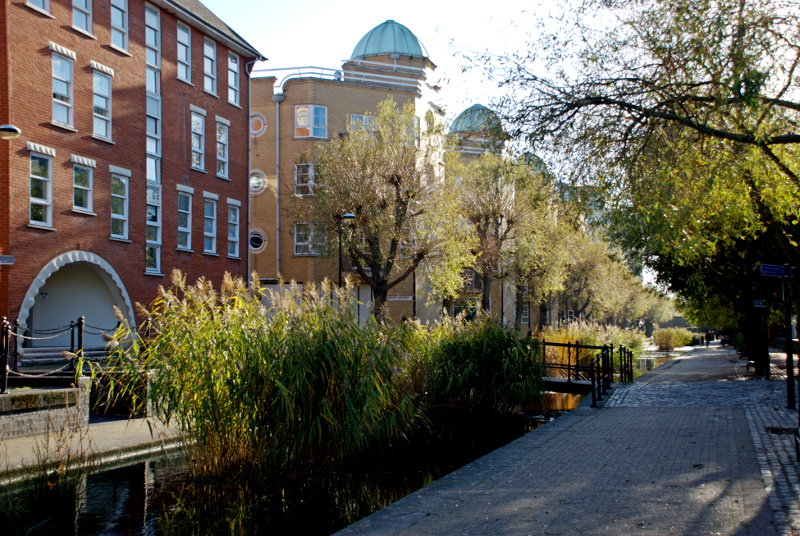 The canal is old but the housing alongside is relatively new. An attractive environment.

We finally arrived at Canada Water which we found to be rather boring. A small lake surrounded by shops. However we could get a number 47 bus which dropped us outside Liverpoool Street Station for the train back home.

We haven't, however, finished with the Rotherhithe peninsula yet. We intend to go again but possibly not until next year. You can come again next time if you like.

9 thoughts on “Return from Rotherhithe”